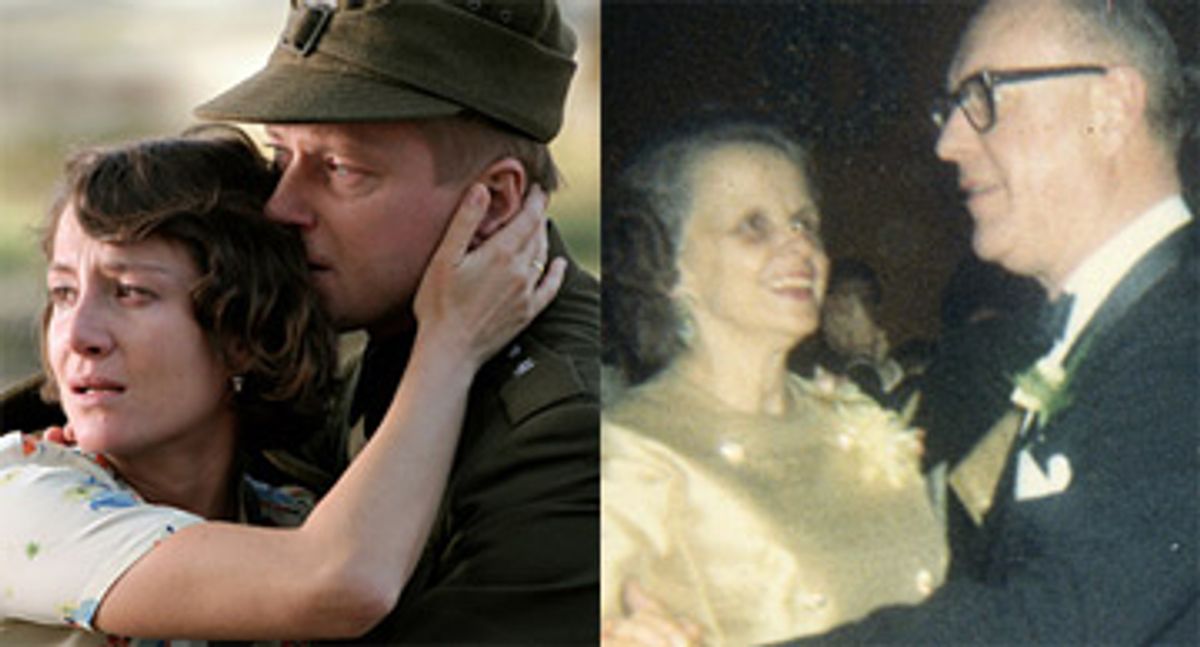 Maja Ostaszewska and Artur Zúmijewski in "Katyn," left, and Allis and Charley in "Must Read After My Death," right.

Let's make this snappy: "Slumdog Millionaire," and at this point that's an enormous duh (as well as a movie nobody will much care about six months from now). Mickey Rourke and Kate Winslet. Heath Ledger, duh, and, I dunno, either Rosemarie DeWitt or Rebecca Hall. Oh, wait, neither of them was nominated. While we're waiting for the most boring Oscar race I can remember to reach its conclusion, there are actually movies out there worth your attention. This weekend, in fact, brings the New York openings of a long list of intriguing films that'll be trickling out in small theatrical release -- or, increasingly, in pay-per-view or digital release -- throughout the spring.

Andrzej Wajda's "Katyn," a foreign-language Oscar nominee last year, is finally getting its U.S. premiere at Film Forum, and this mordant, episodic historical drama may represent a settling of accounts for the 82-year-old godfather of Polish cinema. As anyone with Polish roots knows, Katyn is a forest outside Krakow and the site of an especially tragic event in 20th-century Polish history (which is definitely saying something). It was there that somewhere between 12,000 and 20,000 Polish military officers were summarily executed in 1940, by the Soviet occupiers of eastern Poland, on the personal orders of that great social engineer, Joe Stalin.

Most of these men were not military professionals, but rather engineers, lawyers, architects, teachers and other members of the university-educated middle class. Killing them off was a strategic decision, an attempt to decapitate the Polish bourgeoisie and replace it with a new, Sovietized leadership class. Wajda's father, as it happens, was one of the men shot through the head and buried in mass graves at Katyn, so the filmmaker grew up knowing the truth -- but forced to lie about it. As the film makes clear, for the entire time Poland was a communist state, the story had to be reshaped: Naturally it had to be the Germans, not the Russians, who had committed the crime, which meant it had to have happened in 1941 (after the Nazis had conquered all of Poland).

"Katyn" isn't a directly personal film, however, but an adaptation of the historical novel "Post Mortem" by Andrzej Mularczyk. It's an impressive, multi-strand chronicle that hopscotches back and forth in time to show the effects of the war, the Katyn massacre and consecutive waves of Soviet, German and Soviet occupation and propaganda on a particular family. If it doesn't quite reach the standard of classic Wajda films like "Man of Iron," "Danton" (out shortly on DVD) or "A Love in Germany" -- and may require footnotes for many non-Polish viewers -- it's still a richly absorbing and intensely painful drama with a tremendous, mostly female cast, which moves inexorably toward Wajda's terrifying re-creation of the day his father met his death.

When filmmaker Morgan Dews' grandmother Allis died in 2001, Dews discovered an enormous archive of home movies, audio recordings, photographs and journals that Allis had stored in the late 1960s. They offered an intimate and startling portrait of Allis' troubled marriage to Charley, Dews' grandfather (who died in 1969), which on the surface appeared to anchor a perfectly ordinary suburban family. Then again, the point of Dews' extraordinary, haunting collage film "Must Read After My Death," which is composed almost entirely of Allis' material -- may be that it was an ordinary suburban family, complete with alcoholism, infidelity, mental illness, financial struggles, a frustrated and sometimes bitter mom and a frequently absent and sometimes abusive dad.

As you watch this hypnotic and increasingly bizarre family yarn spin itself out, you may conclude that the only truly strange thing about Allis and her family was the very thing that makes Dews' film possible: She obsessively recorded hours of her own audio diaries, along with family arguments, therapy sessions, Dictaphone letters back and forth with Charley and even what sounds like a wife-swapping party held at their house. Yes, straitlaced insurance executive Charley and ex-bohemian housewife Allis had an open marriage for most of their time together (although it's not entirely clear whether Allis wanted it that way).

"Must Read After My Death" boils Allis' story down to less than 80 minutes, and into something that's both entirely specific -- one idiosyncratic Connecticut family trying to keep up appearances despite intense dysfunction -- and far more universal. It's also a magical, heartbreaking resurrection of the dead, who report that their efforts to solve the big questions of life and love didn't go so well, either. At one point, Charley muses into the tape recorder, "I think I'm beginning to figure out the mysteries of existence." But then he just lets it drop. "Must Read After My Death" is playing at the Quad Cinema in New York and opens Feb. 27 at the Laemmle Sunset 5 in Los Angeles. Wherever you live, you can watch it the way I did, as a pay-per-view video stream on Gigantic Digital, a relatively new player in the online distribution game.

If you are in or near New York, I urge you to check out Film Comment Selects, the annual mini-festival in which the editors of Lincoln Center's venerable film journal pick a roster of underappreciated and below-the-radar titles and give them a little publicity nudge on their way toward a (slightly) larger audience. (The festival runs now through March 5, when it closes with the U.S. premiere of Kathryn Bigelow's Iraq-war action flick, "The Hurt Locker.")

One of the great things about FCS is that it tends to avoid obvious film-festival-type indies in favor of actioners, thrillers, rereleased obscurities and other disreputable fare. This year's fest includes Paul Schrader's "Adam Resurrected," a recent release that failed at the box office (despite its flat-out amazing star performance by Jeff Goldblum as a wisecracking Holocaust survivor in an Israeli loony bin) and the quasi-legendary punk-era saga "Ladies and Gentlemen, the Fabulous Stains" from 1981, which stars Diane Lane and Laura Dern as teen rockers, along with the amazingly young Ray Winstone as the lead singer of a band that features members of the Clash and the Sex Pistols. ("Fabulous Stains" is now available on DVD, at long last.)

Here are a handful of FCS films that will be released in the coming months. I hope to revisit all these in due course, and we're all impatient for the three-hour sludgefest of the Oscar broadcast to begin, so I'm limiting myself to one-sentence teasers here. Except when I'm not.

"The Chaser" I was warned off Na Hong-jin's amphetamine-paced Korean thriller, in which an amoral cop turned pimp hunts the serial killer who's abducted one of his girls, when it premiered at Cannes, and now I know why. Dazzling, brutal and nearly hopeless; understand what you're in for.

"Frontier of Dawn" A baffling but gorgeous semi-supernatural study of l'amour fou, from French underground legend Philippe Garrel ("Regular Lovers") and starring his son, hawk-nosed movie star Louis Garrel. This was Garrel père's first-ever film to premiere at Cannes, where it pissed everybody off, so bravo!

"The Tiger's Tail" His days of Hollywood success long behind him, 76-year-old John Boorman just keeps cranking out unlikely mid-budget movies, this one an intriguing if uneven drama about a hard-driving Dublin developer (Brendan Gleeson) stalked by a sinister doppelgänger (also played by Gleeson) and by the dark side of Ireland's economic boom, which has gotten quite a bit darker since this film was finished in 2006.

"A Woman in Berlin" This explosive and mesmerizing big-budget drama from German director Max Färberböck is adopted from "Anonyma," an infamous memoir by a Berlin woman recounting the rapes by Russian soldiers that she (and countless others) endured, and the affair with a Red Army officer that rescued her, in the chaos at the tail end of World War II. The rare WWII flick that shows you an aspect of that terrible conflict you haven't seen before, anchored by a marvelous, if suspiciously glamorous, performance from Teutonic ice queen Nina Hoss.