Past the point of no return

With unemployment rising, a healthcare crisis and the planet on the brink of incineration, the stimulus bill is only the first step in fixing the nation's problems. 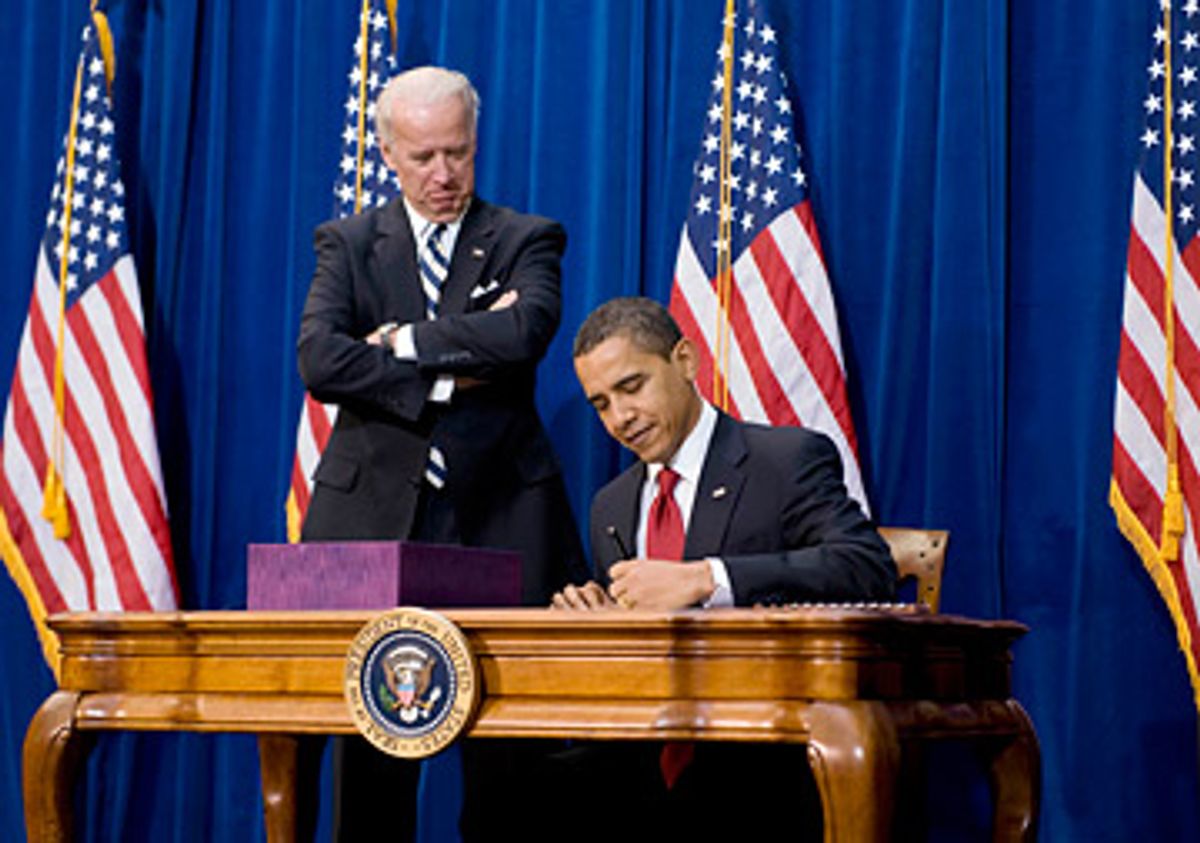 Why did Barack Obama choose to come all the way to Denver to sign the economic recovery package this week? Did he throw a dart at a map? Was he courting Western swing states? Or did he just want a junket to a metropolis that Americans tell pollsters is the most desirable in the nation? My amateur guess is none of the above -- I'm betting the choice (perhaps subconsciously) reflected Obama's affinity for geographic symbolism.

This is the presidential candidate who launched his campaign at the site of Abraham Lincoln's historic "house divided" speech and who delivered his own famous address on race at Philadelphia's Constitution Center. So it's a safe wager that the president had a metaphor in mind when he celebrated the bill's passage along the Front Range. And what a perfect metaphor it was: The setting told America -- if subtly -- that the toughest terrain is yet to come.

Denver, after all, is more than a "heartland" locale that screams "outside the Beltway" -- it is an outpost that warns visitors. From 19th century pioneers to 20th century beatniks to 21st century road-trippers, most cross-country travelers on romantic odysseys west believe they've almost completed their voyage when they first hit the Denver city line. They look at the tumbleweed and ranch land on the outskirts of town and tell themselves they can smell the Pacific Ocean's salty mist. Then they see that wall of snowcapped peaks and realize the most grueling trek is still ahead.

That's where we are right now -- in the euphoric, sky's-the-limit journey that began on Election Night, America is standing here in Denver contemplating a menacing horizon.

The stimulus bill, while essential, was merely our gentle rise up through the Great Plains. In unleashing a flood of deficit spending and avoiding tax increases, the legislation didn't threaten moneyed interests, didn't alter the existing economic topography, and therefore didn't attract the withering hostility from business groups that typically prevents "hope" from becoming "change." While Republican potholes slowed the trip, the bill's refusal to ask anyone for any sacrifice guaranteed its ratification.

From here, though, the highway starts looking like Interstate 70 at Idaho Springs -- steeper and more treacherous. The avalanches of corporate money, and the gale-force gusts of lobbyist opposition that the stimulus evaded will now be ever-present as bills to tighten financial regulation, strengthen union rights, limit carbon emissions and transform our healthcare system begin marching forward.

Initiatives like these aim to scale Rocky Mountain-size problems and confront a plutocracy making billions off the status quo.

Wall Street speculators steal from pensioners as our government bails out the thieves; employers pilfer from workers with the help of labor laws that undermine unions; oil companies profiteer off products that are warming the Earth; and heath insurers jack up premiums and ration coverage.

The road called "reform" that cuts through this craggy political landscape is littered with legislative corpses, as these interests have done -- and will do -- everything possible to protect their bottom line. Obama seems to know this reality, saying the stimulus bill is only "the beginning of the end" of the economic emergency. He is carefully plotting his next tactical decisions -- when to stage particular climbs, which passes to traverse, what cliffs to avoid. But with the stakes so high -- with unemployment rising, the healthcare crisis worsening, and the planet on the brink of incineration -- one decision must be a foregone conclusion: the decision about whether to proceed.

Turning back now, or staying here in Denver for fear the ascent is too tough, is no longer an option. We're past the point of no return.