The last two elections and the consensus of polling data demonstrate that what Americans actually want is a significant departure from the rule by Republicans and their policies.

As part of that New York Times online discussion in which I participated yesterday regarding whether Obama should continue to pursue "bipartisanship," I wrote:

What possible reason is there, then, to argue that Democrats ought to adopt Republican ideas -- regardless of what those ideas are -- simply for the sake of “bipartisanship”? Americans elected Democrats to implement Democratic ideas and will hold Democrats responsible for the success or failure of their policies. Democrats should therefore use their majority power to carry out the polices that they think are the best ones for the country, not dilute those ideas and incorporate discredited Republican approaches in order to fulfill some vague bipartisan ideal.

Shortly thereafter, the NYT released a new poll (.pdf) which included findings showing what Americans think about "bipartisanship" -- and it is the exact opposite of what harmony fetishists continuously claim about Americans' supposed desire for "bipartisanship."  Consider, first, this question:

Which do you think should be a higher priority right now for Barack Obama -- working in a bipartisan way with the Republicans in Congress or sticking to the policies he promised he would during the campaign?

By a 17 point-margin, Americans think it's more important that Obama "stick to his policies" than try to dilute them in order to attract Republican support in pursuit of "bipartisanship."  It's not surprising that 39% want Obama to pursue bipartisanship.  There are still many people who prefer Republican policies and naturally want Obama to embrace those policies in the name of "bipartisanship" -- but the group that wants that is in the clear minority.  That's why Republicans lost so decisively in the last two elections.  But even more revealing is this next question:

Which do you think should be a higher priority for Republicans in Congress right now -- working in a bipartisan way with Barack Obama or sticking to Republican policies?

That's actually an amusing result:  a huge majority of Americans want Congressional Republicans to be "bipartisan," but don't want Obama to be.  Overwhelmingly, then, Americans favor "bipartisanship" only to the extent that it means that Republicans support Democratic policies and abandon their own.

Put another way, the reason that Americans voted overwhelmingly in favor of Democrats in the last two elections and overwhelmingly against Republicans is because they want Democratic policies and not Republicans policies.  They drove Republicans out of office in massive numbers because they don't want Republicans and their policies governing the country.  They want something different than Republican policies, meaningfully distinguishable from those policies -- "change."  Everywhere but the Beltway, that proposition would be self-evident.  [If the question about "bipartisanship" is asked generically without regard to political party -- as the new Washington Post poll phrased it -- only then will Americans will say they want bipartisanship over "political leaders sticking with their positions," because -- as all of this new polling data proves -- they want Republicans to compromise and support Obama's policies.]

The political establishment has never come to terms with, and the media establishment just refuses to acknowledge, how deeply unpopular and discredited the GOP is among most Americans in the wake of the eight-year Bush disaster.  Political and media elites don't want to acknowledge that because they lent their continuous support for eight years to Republican power, yet -- even with Bush gone -- it's scarcely possible to imagine how a major political party could be held in lower esteem among voters.  By huge margins (63-29%), Americans believe the GOP opposed Obama's stimulus package for political reasons, not because they genuinely believed it would be bad for the economy; they overwhelmingly disapprove of Congressional Republicans (38-56%) while approving of Obama (68-25%) and even Congressional Democrats (50-44%); trust Obama over Congressional Republicans to handle the economy (61-26%); and trust Democrats over Republicans "to do a better job in coping with the main problems the nation faces over the next few years" (56-30%).  Those are enormous margins.

The punditry's claims that Americans want Democrats to dilute their policies in order to attract and include Republican support is entirely misleading.  The endless media stories that Eric Cantor, Michael Steele and Rick Santelli are now riding some resurgent, anti-stimulus GOP wave are pure fiction.  And the incessant calls for "bipartisanship" are anti-democratic in the extreme.

"Bipartisanship" has long been, and continues to be, a deceitful fig leaf to demand enactment of Republican policies even when Americans overwhelmingly oppose those policies.  Just look at what two of the other participants in that NYT discussion yesterday mean when they call for "bipartisanship" from Obama:  they mean that Obama should enact classic Republican policies.  Hence, the Federalist Society's Steven Calebresi wants, in the name of "bipartisanship," Obama to enact school vouchers and other long-standing GOP education proposals and the various McCain proposals on health care.  National Review's Ramesh Ponnuru thinks "bipartisanship" means Social Security reform that includes benefits cuts.  And in the foreign policy and "terrorism" areas, "bipartisanship" almost invariably means keeping even the most radical Bush/Cheney policies in place with, at most, slight or even just symbolic modifications.

Of course, nobody embraces this bipartisanship myth more than Democrats do, even when (perhaps especially when) they're in the majority.  When Republicans controlled the White House and Congress during most of the last eight years, demands for "bipartisanship" -- even from Democrats -- were virtually impossible to find.  Instead, Democrats were more than happy to meekly assume the complicit posture for which they became known, using their minority status as an all-purpose excuse as to why they couldn't stop -- and usually supported -- even highly unpopular Bush policies (such as the Iraq War).  Yet now that they're in the majority, "bipartisanship" suddenly becomes not only the supreme Beltway religion, but the battlecry of Democrats as well -- the phrase that justifies everything from embracing GOP positions to allowing flagrant Bush war crimes and other lawbreaking to go unpunished (as but one example: it's rather difficult to listen to Robert Gibbs and conclude anything other than that the administration is strongly considering the type of "Social Security reform" which people like Ponnuru have long advocated).

To the extent that elections permit messages to be sent on the part of the citizenry, the message from the last two elections could not be any more emphatic:  Republicans and their policies are discredited, despised and unwanted.  Polls before and after those elections unambiguously demonstrate the same sentiment.  And that sentiment is completely rational -- after all,  just look around at the decaying state of the country after eight years (really more) of extreme GOP political dominance.  Yet our political and media class continue to ignore (as usual) the views of citizens and instead demand the opposite:  that the few remaining differences between the parties be reduced still further, and that Republicans and their ideology continue to provide at least part of the basis for (and, in many cases, the bulk of) government policy (here's David Boren in today's Washington Post proposing all sorts of ways to vest GOP office holders with major influence over laws and policy).

As always, it's worth noting that the mere fact that large majorities of Americans believe X does not mean that X is true or right.  But what is clear is that it's simply dishonest to claim that Americans want Republicans and their policies to shape how the country is governed.  That's exactly what they don't want, even if it's done by manipulatively slapping the "bipartisan" justifying label on it.

UPDATE:  The political "genius" who guided the GOP into full-scale political ruin -- Karl Rove -- said this in The Wall St. Journal two weeks ago:

Congressional Republicans lack President Barack Obama's bully pulpit and do not have the majorities that House Speaker Nancy Pelosi and Senate Democratic leader Harry Reid enjoy.  But they are playing their hand extraordinarily well. . . .

House Republicans had the wisdom to continue to talk to the Obama White House. This made them look gracious, even as the president edged toward a "my way or the highway" attitude.

As always, Karl Rove lives in a universe that is pure fantasy.  It was conclusively clear from the moment he wrote that, and is even clearer now, that his claims are pure fiction.  Americans overwhelmingly believe that Obama is trying to work with Republicans (74-20%), but that Republicans are not trying to work with Obama (31-57%).   It is Obama -- by a 43-point margin over the Congressional GOP -- who is perceived as trying to compromise and be bipartisan.  Yet Rove blithely asserts the exact opposite of the truth:  that it was Congressional Republicans who won politically because they were perceived as being so "gracious" and Obama looked dictatorial.  Even as the GOP is as discredited as it can possibly be, Rove claims with a straight face that they "are playing their hand extraordinary well" and that "the president won this legislative battle, but at a high price -- fiscally and politically."

Rove's assertions, as usual, are the opposite of reality.  Yet because media stars continue to view him as a man possessing unparalleled political wisdom, his propaganda becomes their reality:  the dominant media storyline, therefore, is that people want Republicans included in governance and the GOP's stimulus opposition triggered a Republican resurgency among the citizenry.  The disconnect between (a) popular sentiment and (b) the media's claims about popular sentiment, simply could not be more vast.

UPDATE II:  Josh Marshall documents a perfect example of this rank media myth-making from the always illustratively inane Politico:  according to that Drudgian gossip rag, we're a "nation of Santellis" -- just like, during the campaign, the Ordinary American was represented by the right-wing extremist, Rush-Limbaugh-following, McCain/Palin-loving Joe the Plumber.  No matter how compelling the evidence is that the country has turned decisively against Republicans and Republicanism, the establishment media will just invent storylines out of whole cloth to claim that they are widely popular, even representative of most Americans, and their favorite instrument for demanding Republican rule even when Republicanism has been emphatically repudiated by the citizenry is "bipartisanship."

UPDATE III:  As polls show Congressional Republicans held in as low esteem as can be imagined -- blamed for virtually everything and viewed as obstructionist -- Time Magazine publishes a new story glorifying GOP House Whip Eric Cantor, with this headline: 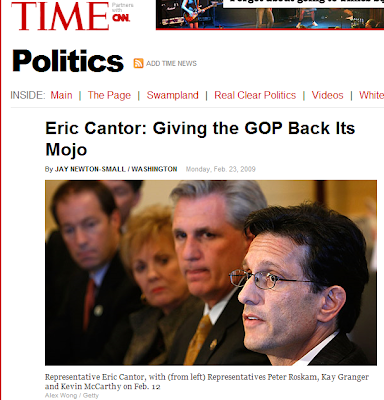 They have their mojo back and we're a nation of Santellis -- better give them what they want.  Is it even theoretically possible to have a worse, more deceitful and more moronic press than the one we have?