Who is the right calling "loser"?

The GOP is whipping up resentment of Obama and "loafers" who defaulted on home loans. But it crashed the biggest welfare Cadillac in history. 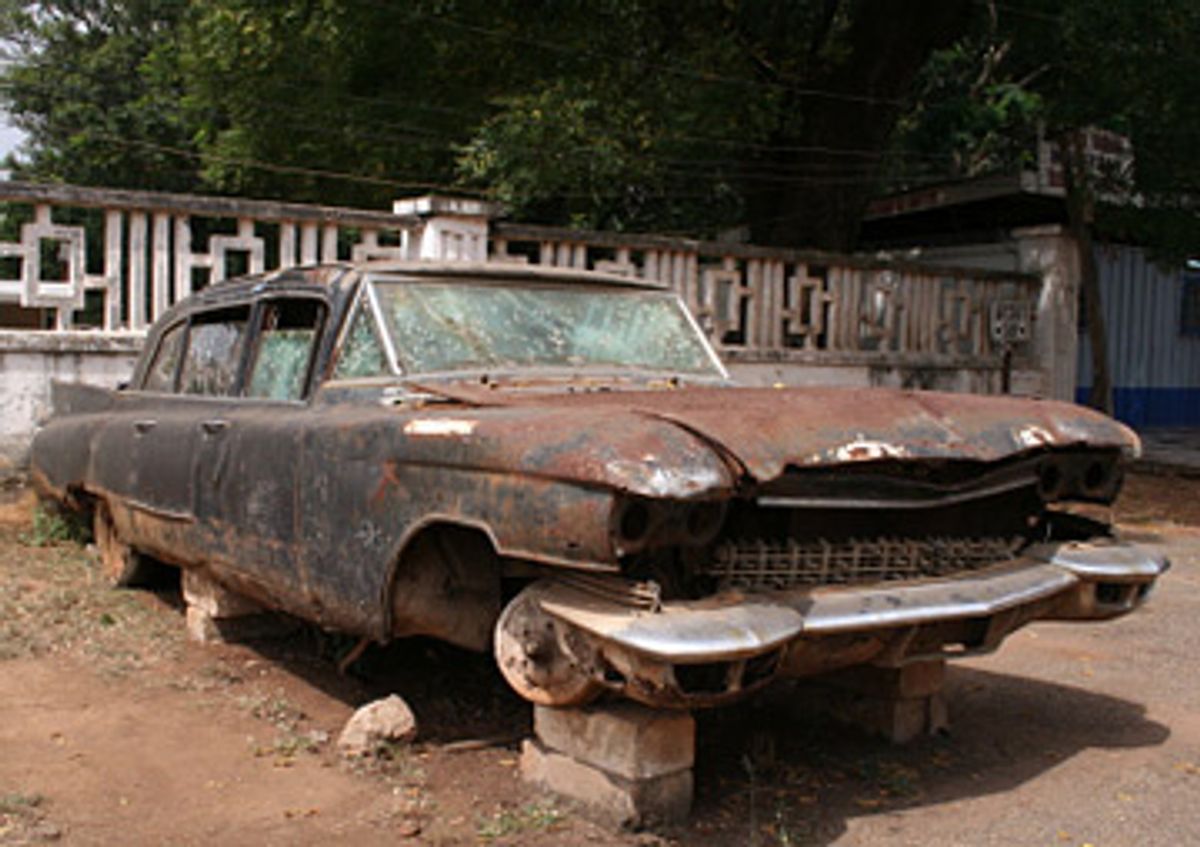 CNBC stock analyst Rick Santelli instantly became a right-wing hero last week when he launched into a five-minute on-air rant from the floor of the Chicago Mercantile Exchange. Shouting "This is America," the former derivatives trader attacked President Obama's housing plan as "promoting bad behavior" by rewarding the "losers" who took on more debt than they could afford. Sporadically cheered on by a small group of stock traders in the background, Santelli said Obama was turning America into Cuba, and called for a capitalist "Chicago Tea Party." He finished by calling the floor traders "a pretty good statistical cross-section of America," a "silent majority" who were opposed to socialist policies that would make "Thomas Jefferson and Ben Franklin roll over in their grave."

Santelli's diatribe has become the most popular video in the history of CNBC: A copy posted on YouTube had nearly 700,000 viewers. The Drudge Report splashed his remarks on its front page. "Watch for the Palin-Santelli 2012 signs," Kathryn Lopez wrote in a post on the National Review Online, adding: "The reaction to Rick Santelli's Chicago-trading-floor incident this morning echoes the emotional reaction my inbox had to Sarah Palin's convention speech this summer." Right-wing blogs were filled with excited commentary about how "grassroots tax revolts are springing up all over." One of the Web sites that sprang up promoting Santelli's "tea party" exulted, "Our founders have stopped rolling over in their graves. After months of tossing and turning, we have finally taken back the banner of hope that has been hijacked by the 'do-good' saviors."

The right wing hasn't been so excited since Obama used the fateful expression "spread the wealth" in his interview with noted tax analyst and Middle East expert Joe the Plumber.

None of this is surprising. Whipping up anger at the undeserving poor, whether yesterday's "welfare loafers" or today's irresponsible borrowers, has been a winning Republican political tactic for more than 40 years. In his first national political speech, a televised address he delivered for Barry Goldwater in 1965, Ronald Reagan told an apocryphal story -- the first of many he would tell over the decades -- about a woman who had six children and was pregnant with a seventh, and who wanted to divorce her husband because welfare would pay her $80 more per month than he made. The do-good Democrats, Reagan warned, were preparing to install "socialism" in the U.S.

The right's assault on the undeserving beneficiaries of federal largess has always contained a thinly disguised element of racism. The GOP's successful "Southern strategy," in which it appealed to white Southerners' anger at federal civil rights laws, was all about race. When Reagan in 1976 referred to working people being outraged at a "strapping young buck" using food stamps to buy T-bone steaks, everyone knew whom he was talking about.

Although it's less explicit, there's also a racial element in the outrage over Obama's housing plan. Banks disproportionately targeted minorities for subprime loans, which of course means that large numbers of the "losers" Santelli ranted about are black or Latino.

No wonder Republicans have embraced Santelli as the new Sarah Palin. All the required elements seem to be in place for a populist revolt: a big-spending liberal federal government getting ready to hand over billions of dollars to a bunch of deadbeat black and brown people. Fire up the outrage, honey: The welfare Cadillac is back!

But this time, the GOP's time-tested tactic isn't going to work outside its hardcore base. Facing an enormous crisis that touches everyone, most Americans can no longer afford the luxury of scapegoating -- and may even have begun to question core conservative assumptions about individual responsibility, the free market and the role of the federal government. As it realizes this, the right wing's anguished shrieks have become increasingly unhinged. But those shrill attacks only make them look even more heartless, and further marginalize them.

In principle, Santelli's resentment is not entirely unjustified. Many people did take on mortgages that they couldn't afford. No matter how uninformed you are about finance, you ought to be aware that when you sign up for an adjustable rate, you're gambling. So it's understandable that some people who were informed and responsible enough to take on mortgages within their means are unhappy at the prospect that the government is bailing out some people who weren't so informed or responsible.

But taking a stand on the bailout right now is like refusing on principle to let firemen save your burning house. In their zeal to punish the "losers," Republicans are ignoring the fact that the whole neighborhood is in flames, and you can't pick and choose which building to save. The entire world is in financial meltdown. Americans are just now beginning to realize that the scope of this crisis is far bigger than they had thought. The problem can no longer be blamed on the undeserving poor and the socialist do-good Democrats who prop them up: The problem is the system itself. It was the system that failed, and that system is based on free markets and a hands-off federal government.

The economic crisis has finally revealed the fundamental contradiction in the right's worship of unfettered capitalism, a fealty neatly summed up by the phrase "greed is good." Conservatives believe that the market is not only the greatest generator of profit but is also morally superior to any other system. It is morally superior to "do-gooder" liberalism because it encourages individual responsibility and hard work. By contrast, liberal redistributionist programs result in moral hazard and encourage malingering and irresponsibility.

But this happy vision in which the hardest, most responsible workers are also the wealthiest has now been shown to be a chimera. In the age of post-industrial, globalized, virtual capitalism, the biggest profits do not accrue to those who work the hardest, but to those who best know how to game the system. We all now know that we have been living in a world of Magic Money, a world of hedge fund managers and derivatives traders who made billions of dollars on arcane transactions they themselves did not understand. Until it all went south, these Masters of the Universe were the gods of the right. As in Calvinist theology, their worldly success proved their moral rectitude.

The problem for conservatives is that the world of Magic Money has now been shown to be utterly amoral. Money for nothing! That was the GOP's theme song. So the GOP can't suddenly attack the poor slobs who signed mortgages that were too good to be true without dethroning its golden idol of greed. You can't argue that Magic Money is good when you win and bad when you lose.

It's the "winners," the super-capitalist heroes of the right, who turned out to be the biggest "strapping young bucks" in history. The Ayn Randian believers in the free market drove the largest welfare Cadillac ever seen, a cosmic Coupe de Ville whose fins were larger than the entire solar system. They made gazillions of dollars playing with unsecured and unregulated credit default swaps, like acid heads who had somehow made it to the finals of the World Monopoly Championship. When it all came crashing down, these brazen welfare loafers came crawling to the federal government to save them. They privatized profit and socialized loss, and they did it to the tune of $300 billion in federal money.

These are the right's poster children. They played the capitalist game exactly the way Alan Greenspan, Milton Friedman and George W. Bush drew it up -- without rules, with greed as the only driving force. When their gigantic Ponzi scheme crashed, it took down the U.S. economy with it. Now Americans are supposed to blame everything on the "losers" whose only sin was that they played the Monopoly game with thousands of dollars instead of billions?

The only conservatives who have any credibility to talk about individual responsibility and hard work are the hardcore libertarians who demand that the government should refuse to bail out any "loser" -- whether a defaulting homeowner or a bankrupt bank. This scorched-earth policy -- let the forest fire burn everything, so that new seeds will generate -- is almost universally recognized to be a recipe for a worldwide depression. But at least it's intellectually consistent.

Most of the right did not dare take that purist line. It went along with Bush's $700 billion bailout of Wall Street and incinerated its populist pitchfork. Even those who opposed the bank bailout, like Santelli, did so pretty tamely. Santelli never called John McCain Fidel Castro for supporting the bank bailout: In fact, as Santelli told Chris Matthews, he voted for McCain. Oddly, the right only becomes truly apoplectic when individual "losers" are involved, not enormous institutions. Its principles become mysteriously squishy when the engines of advanced capitalism are involved.

As its internal contradictions strangle it, the pseudo-populist right is becoming so hysterical, so overwrought, that its rhetoric borders on lunacy. Speaking of lunacy, here's what Rush Limbaugh recently said about Obama's economic policies:

I think that what's happening here, there's an anger, there's a rage, and there is an effort here to totally restructure American society and American culture, that there is a desire on the part of the Obama White House, and the liberal Democrats in Congress, to expand the welfare state to include many of the middle class and even some in the upper middle class by so damaging the economy that nobody has any choice but than to take unemployment, welfare checks, what have you, in order to be able to feed their families.

Paranoid, poisonous ravings like this, in the face of a terrible national crisis, are revealing the true face of the contemporary American right -- and it isn't pretty.

Someone must always be to blame: This is the belief -- the emotional attitude -- that has driven the right since Goldwater. The unfit must perish. The unworthy must be thrown out of the boat. It's easy enough to indulge this hyper-individualistic, every-man-for-himself credo when times are good. But when the whole boat is sinking, it only appeals to the mean-spirited. The national pain is too widespread, the national need is too great, and the number of those who are able to indulge in the cheap kicks of demonizing and resentment is shrinking by the day. If there is another Boston Tea Party, the only cargo that will be thrown overboard is the GOP itself.