Obama sees long road ahead, says "we are not quitters"

In his first speech to a joint session of Congress, the president makes an argument for his plans to fix what's ailing the U.S. 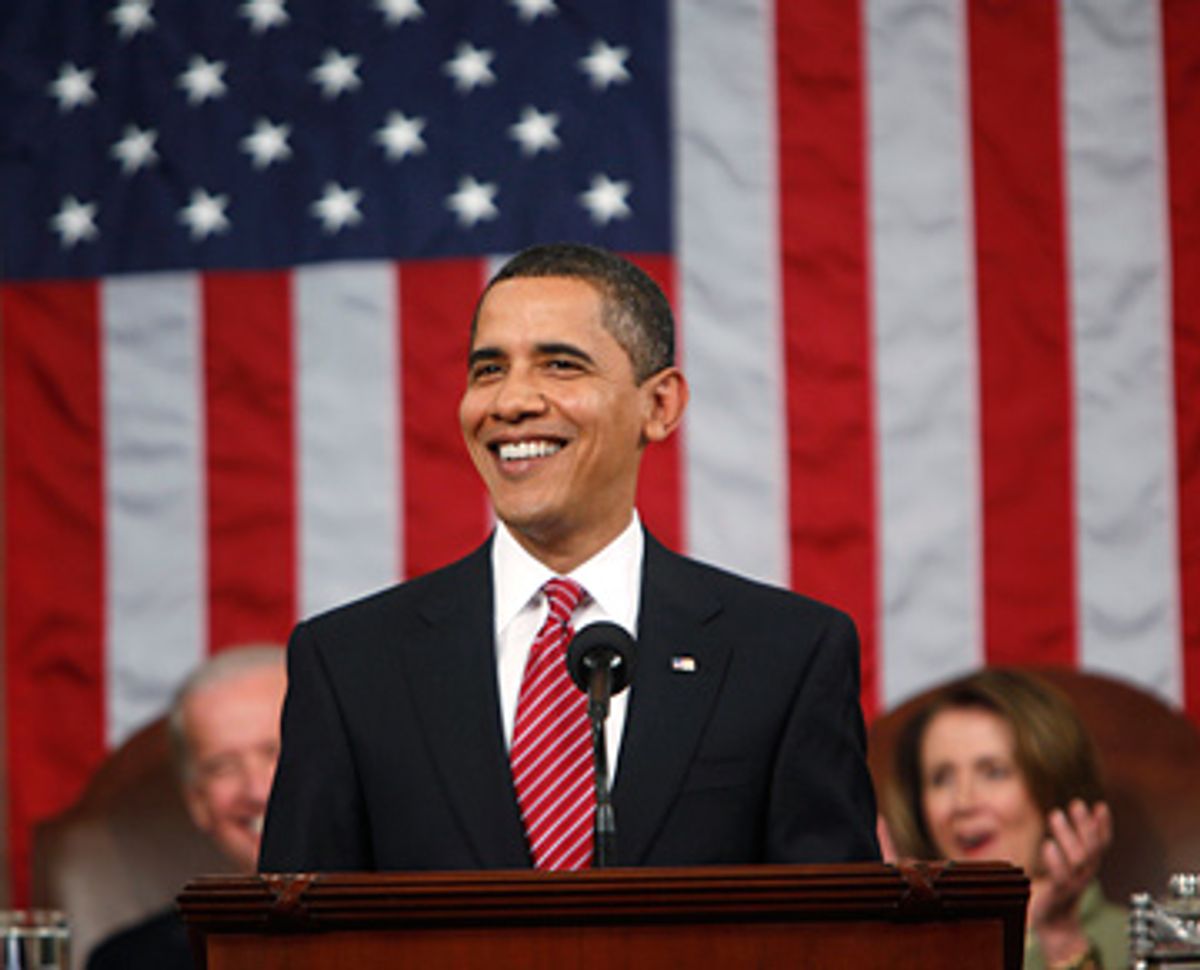 You only get one chance at your first address of a joint session of Congress. Fortunately for President Obama, he didn't waste his opportunity, and performed well, delivering what was a pretty good speech on the page with his usual prowess.

The speech wasn't really a barnburner, but then, these things usually aren't; Obama's not on the trail anymore, he's president now, and his speeches reflect that difference. This was about laying out his agenda for the next year and beyond, and -- perhaps more importantly -- about drawing first blood in the battle over that agenda. Obama had the national stage tonight, and he used it to anticipate the arguments Republicans will make over the coming weeks and months and to preempt them.

We may see the effect of that strategy of preemption as early as tonight. The Republican response to Obama's speech, to be delivered by Louisiana Gov. Bobby Jindal, emphasizes the character of the American people in order to say that the GOP trusts Americans to know how to fix the country's woes, while Democrats fall back on spending and increasing government power. Jindal's prepared remarks also call Obama a pessimist, implying he doesn't believe Americans can succeed.

In his speech, though, the president hit many of the same notes, while at the same time emphasizing his belief that government has a role to play in recovery.

"I reject the view that says our problems will simply take care of themselves; that says government has no role in laying the foundation for our common prosperity," Obama said, continuing:

For history tells a different story. History reminds us that at every moment of economic upheaval and transformation, this nation has responded with bold action and big ideas. In the midst of civil war, we laid railroad tracks from one coast to another that spurred commerce and industry. From the turmoil of the Industrial Revolution came a system of public high schools that prepared our citizens for a new age. In the wake of war and depression, the GI Bill sent a generation to college and created the largest middle-class in history. And a twilight struggle for freedom led to a nation of highways, an American on the moon, and an explosion of technology that still shapes our world.

We are a nation that has seen promise amid peril, and claimed opportunity from ordeal. Now we must be that nation again. That is why, even as it cuts back on the programs we don’t need, the budget I submit will invest in the three areas that are absolutely critical to our economic future: energy, health care, and education.

It's worth noting that there's another important response to Republican arguments contained in that excerpt: "In each case, government didn’t supplant private enterprise; it catalyzed private enterprise." This particular line may get a lot of use as elements on the right make the case that Democrats' plans for the economy amount to socialism.

Below, another section of the speech I thought was noteworthy. I'm curious to know what you all thought of the speech, generally and specifically -- was there was a particular part of it that you liked or disliked? Tell us in the comments section.

I think about Ty’Sheoma Bethea, the young girl from that school I visited in Dillon, South Carolina – a place where the ceilings leak, the paint peels off the walls, and they have to stop teaching six times a day because the train barrels by their classroom. She has been told that her school is hopeless, but the other day after class she went to the public library and typed up a letter to the people sitting in this room. She even asked her principal for the money to buy a stamp. The letter asks us for help, and says, “We are just students trying to become lawyers, doctors, congressmen like yourself and one day president, so we can make a change to not just the state of South Carolina but also the world. We are not quitters.”

We are not quitters.

These words and these stories tell us something about the spirit of the people who sent us here. They tell us that even in the most trying times, amid the most difficult circumstances, there is a generosity, a resilience, a decency, and a determination that perseveres; a willingness to take responsibility for our future and for posterity.

Their resolve must be our inspiration. Their concerns must be our cause. And we must show them and all our people that we are equal to the task before us.

I know that we haven’t agreed on every issue thus far, and there are surely times in the future when we will part ways. But I also know that every American who is sitting here tonight loves this country and wants it to succeed. That must be the starting point for every debate we have in the coming months, and where we return after those debates are done. That is the foundation on which the American people expect us to build common ground.

And if we do – if we come together and lift this nation from the depths of this crisis; if we put our people back to work and restart the engine of our prosperity; if we confront without fear the challenges of our time and summon that enduring spirit of an America that does not quit, then someday years from now our children can tell their children that this was the time when we performed, in the words that are carved into this very chamber, “something worthy to be remembered.” Thank you, God Bless you, and may God Bless the United States of America.