Will trade: One black Democrat for one Mormon Republican

Even if Congress gives D.C. a vote in the House, don't expect federal lawmakers to stop meddling in the city's business. 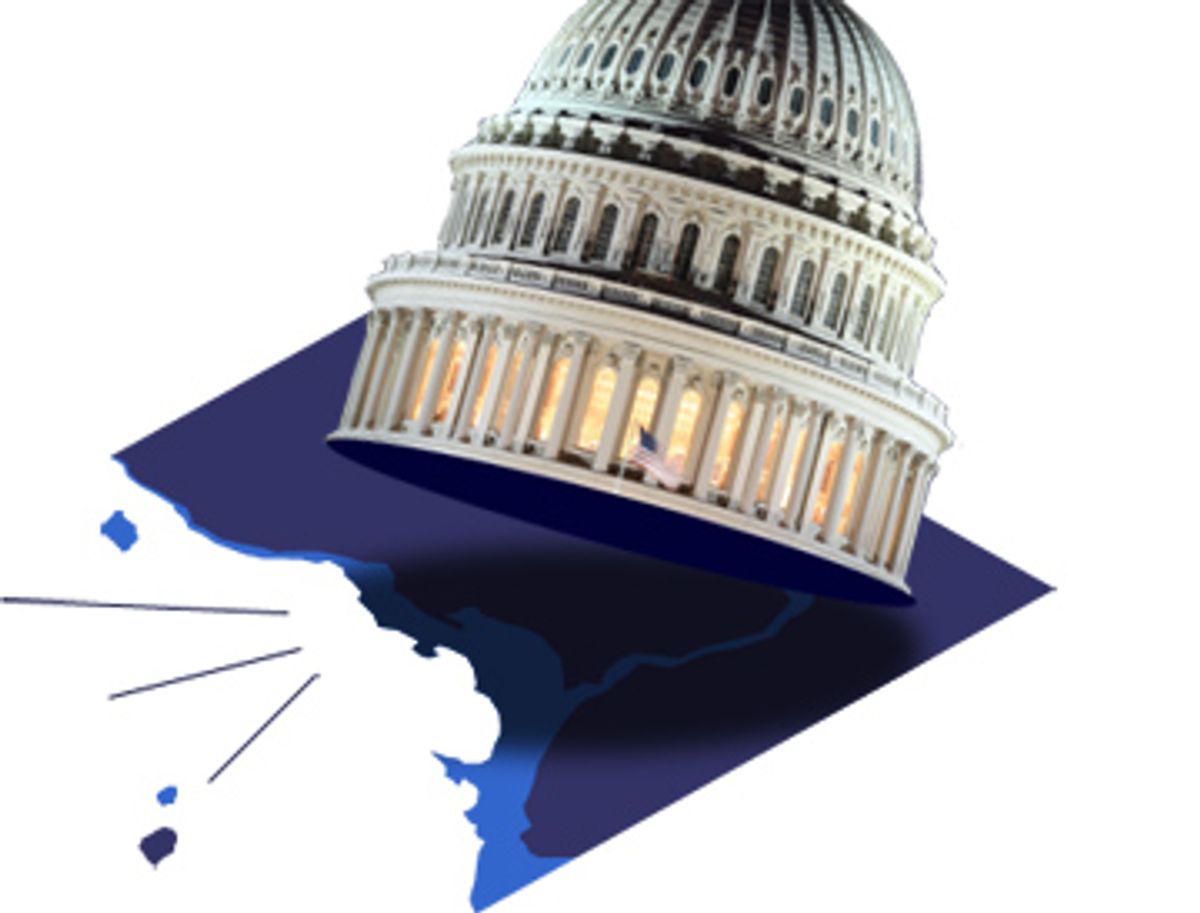 Not long before President Obama's inauguration last month, some homemade fliers started popping up on lampposts and traffic lights around town. "Welcome to D.C.!" the posters proclaimed, in red ink, next to stenciled images of people in voting booths. "Wyoming: 522,830 residents. 244,818 voters. Washington, D.C.: 588,292 residents. 399,127 voters. 0 votes in Congress."

The stats were a little off; the population estimates came from 2007 Census figures, not the more current 2008 numbers, which show both Wyoming and D.C. have grown. And the voter registration numbers actually undercounted D.C. voters, by using stats from August instead of the November election. But the point should not have been hard to miss for the hundreds and hundreds of thousands of people who came to Washington for the inaugural celebration: The nation's capital may as well be a colony, taxed heavily by its powerful rulers without any say in how the money is spent. Even though it's got more people, and more voters, than Wyoming, the state with the fewest residents. Just like Guam, Puerto Rico, the U.S. Virgin Islands and American Samoa, D.C. has no members in the Senate, and its delegate to the House can only vote in committees. But unlike those territories, D.C. citizens pay federal taxes, cast ballots for president and -- despite the best efforts of many members of Congress to pretend the Capitol is located on some far-off planet run by evil monsters, who thus become the perfect foil for long, Washington-bashing political careers -- live smack in the middle of the U.S. mainland.

Now Congress appears to be on the verge of granting D.C. actual voting representation in the House. The Senate is expected to pass legislation Thursday or Friday that would expand the House to 437 members, adding one seat for the District and one seat for Utah, where officials say the 2000 Census would have yielded an extra seat if overseas Mormon missionaries had been counted. The House will likely pass the bill next week, and Obama, who voted for similar legislation that failed two years ago, is virtually certain to sign it. By giving Utah a seat, which is all but sure to go to a white Republican, the bill offsets the fact that D.C. is equally sure to elect a black Democrat to its new seat, calming some partisan concerns. It's a pretty obvious political bargain, of the sort you usually don't see done so nakedly.

But the complicated politics behind the legislation don't bode well for a real change in the way Congress treats D.C. -- as a petri dish for policy experiments or partisan whims. Nor is there much reason to hope the Senate will ever expand beyond 100 seats so the District could get two senators, or even one, any time soon. It's not hard to see why. Look back at the Census numbers and voter registration statistics, and two things stand out: Nearly everyone in Washington, D.C., is a Democrat, and more than half the people in Washington, D.C., are black.

The GOP is already down enough seats in Congress without handing Democrats a few extra ones in each chamber, and Republicans who oppose the voting bill, though it would only give the Dems one more seat in the House, worry it might set a precedent that would make adding two Senate seats easier down the line. Of course, this is 2009, not 1959, so none of the Republicans who oppose the D.C. voting bill will come out and say, "We don't want to guarantee seats for three more black Democrats in Congress." Instead, the opposition is all couched in legalese. The GOP thinks the bill will be thrown out by the courts; the Constitution says House and Senate members must come from "the States," and even though D.C. is treated as a state by the federal government all the time, most Republicans say that's enough reason to vote no. (Eight Republicans voted for the bill on a Senate procedural motion Tuesday, though one, Alaska's Lisa Murkowski, said she plans to vote against the bill on final passage.) Go pass an amendment to the Constitution, the GOP says blithely, well aware that D.C. has already tried that and that the amendment process isn't exactly speedy; the last one to be ratified, the 27th Amendment, was proposed in 1789 and became official in 1992.

Though Democrats are pushing the bill through, they won't even begin to consider Senate representation, and even with wide margins in both chambers, they still felt the need to throw the Utah seat in as a sop to the GOP. The bill's supporters won't talk about the issue in racial terms, either, though the language they used at a press conference Tuesday was straight out of the civil rights movement. "Sometimes an injustice persists so long that we begin to accept it and forget how unjust it is," said Sen. Joe Lieberman of Connecticut, who has been an unflagging champion of D.C. voting rights as chairman of the committee that oversees the issue, no matter how he might infuriate Democrats at other times. "Though people may make partisan arguments about it, ultimately this is about justice, this is about democracy, this is about the integrity of our system." D.C.'s Delegate Eleanor Holmes Norton also avoided race when discussing the reason passing the bill has been so complicated, though she was fairly blunt about why the GOP doesn't like the plan: "We're all Democrats," she told Salon.

Besides the constitutional argument, Republicans like to claim D.C. doesn't need its own voting representation because the city gets plenty of federal money. "Congress has clearly been very generous toward the District," Sen. Jon Kyl, R-Ariz., said Tuesday. "It is in no way underrepresented and certainly doesn't deserve to have an additional member of Congress, whose goal it would be to expand the District's share of federal spending." Of course, huge sums of the per-capita federal spending that the GOP cites are due only to the fact that the government is located in the District; the city also incurs costs, which aren't fully reimbursed, for things like the inauguration, and it sends local cops to protect motorcades around town. If the federal government and related buildings, like foreign embassies, didn't take up so much of the District's most valuable real estate, sitting there tax-free, the city's finances would be in much better shape. Most of the annual appropriation from Congress -- $9 billion in 2007, the last time the bill passed as stand-alone legislation instead of being wrapped up in another spending bill -- is actually paid for out of D.C.'s local taxes, which the city is required to turn over to the feds so lawmakers can give it back with strings attached. The local budget has to be approved by Congress before officials can plan how to run the government. (The rest of the money is the same kind of grants that every state gets, even the ones whose governors say they don't need more federal cash.)

None of that, though, will change, even if the voting bill becomes law. Congress isn't likely to do anything about the GOP's lack of respect for the District's ability to run its government, without some junior House member from far across the country deciding he knows better. Even the Democrats supporting the bill say the courts will let it stand only because the Constitution gives Congress the power to do whatever it wants with the District. Inspired by the Founding Fathers, Republican lawmakers have a long history of messing with D.C. just because they can. There was the proposal to name 16th Street after Ronald Reagan, though Reagan couldn't win D.C.'s three electoral votes even during his 1984 landslide win over Walter Mondale. There was the nine-year ban Congress put in against D.C. using tax money to provide clean needles for drug users, even as the city's AIDS rate climbed. There was the local referendum in 1998 on allowing medicinal marijuana in the District -- in which Congress made it illegal for officials to count the votes. There was a bizarre scheme cooked up by Sen. Sam Brownback to set up a flat tax in D.C., since the GOP sees the District as a perfect laboratory for testing out new policies; after all, their own constituents don't live there, so they don't have to suffer through the results.

Even during the debate on the voting bill, Republicans couldn't bring themselves to leave D.C. alone, or stop forcing it to swallow their conservative ideology. The courts have already forced the District to revise its gun control laws, which used to be one of the strictest in the nation, but that didn't stop Sen. John Ensign, R-Nev., from attaching an amendment to the voting rights legislation that would overturn the new gun laws, too. And Kyl had an easy answer to the whole problem on Tuesday: D.C. should just pack it in and become part of Maryland. "Up to now, the residents of the District have not seen fit to take advantage of this offer to have full representation in the Congress as residents of the state of Maryland," he said. "But they will have that opportunity again when an amendment is proposed in the context of this legislation."

Norton told Salon she has a whole set of other legislation to free the District from meddling by Congress in the future, but don't hold your breath on any of it passing. The non-voting delegate also said Senate seats were something to worry about down the road. "Congress is an incremental place," she said. At this point, 35 years after Congress finally agreed to let the city elect its own mayor, trading for a House seat with Utah is probably the most citizens of the District can hope for. Washington, D.C., still won't be on par with Wyoming. But it's a start.