What mental state allows someone to condemn the very tactics which, as everyone knows, they pioneered and spent years exploiting? 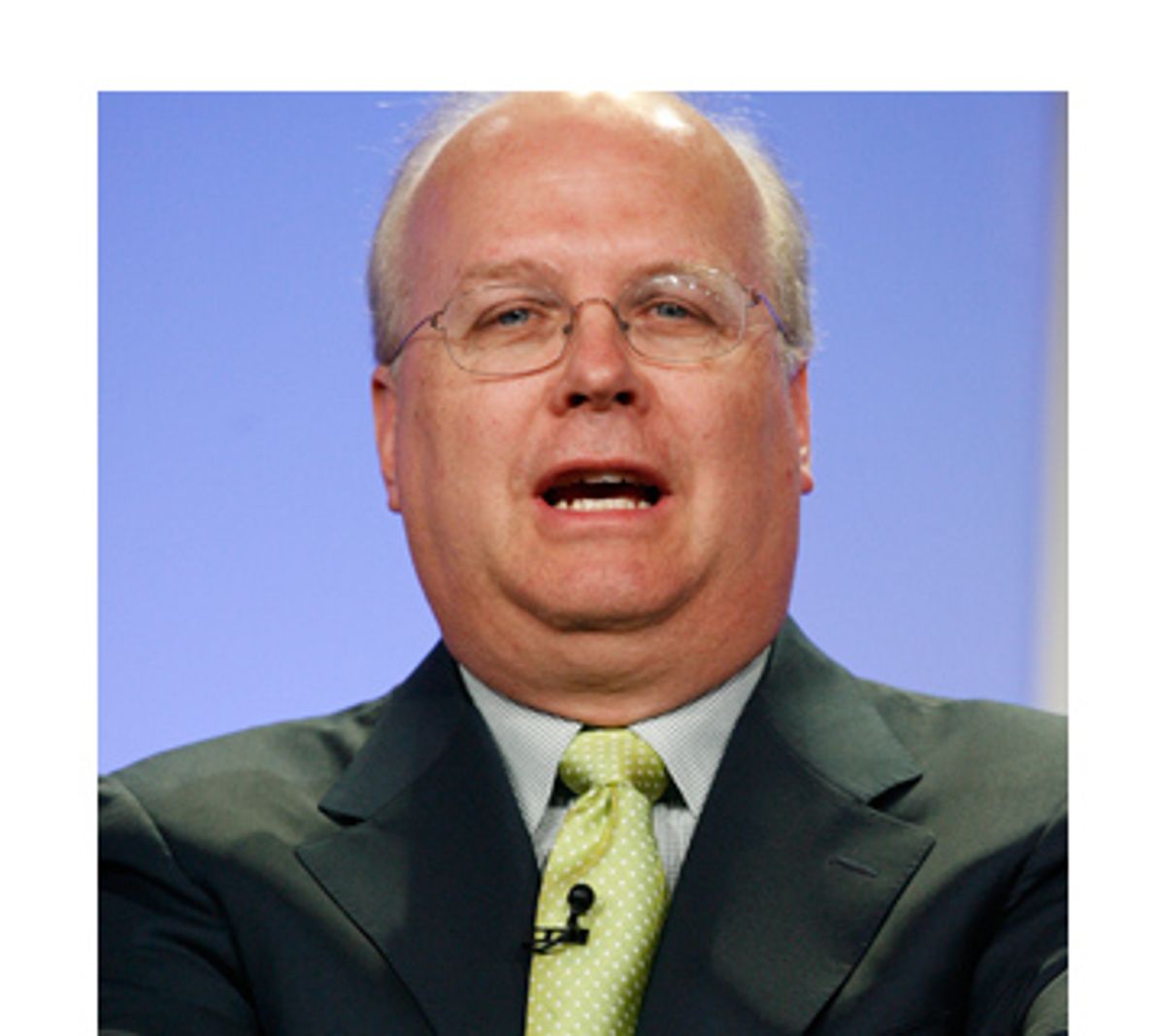 Why does he routinely ascribe to opponents views they don't espouse?

President Barack Obama reveres Abraham Lincoln. But among the glaring differences between the two men is that Lincoln offered careful, rigorous, sustained arguments to advance his aims and, when disagreeing with political opponents, rarely relied on the lazy rhetorical device of "straw men." Mr. Obama, on the other hand, routinely ascribes to others views they don't espouse and says opposition to his policies is grounded in views no one really advocates. . . .

Mr. Obama portrays himself as a nonideological, bipartisan voice of reason. Everyone resorts to straw men occasionally, but Mr. Obama's persistent use of the device is troubling. Continually characterizing those who disagree with you in a fundamentally dishonest way can be the sign of a person who lacks confidence in the merits of his ideas.

It was said that Lincoln crafted his arguments in "resonant words that enriched the political dialogue of his age." Mr. Obama's straw men aren't enriching the dialogue of our age.  They are cheapening it.

The President And The Straw Man

'Some Say' But Bush Won't Say Who When Arguing Policy Points

When the president starts a sentence with "some say" or offers up what "some in Washington" believe, as he is doing more often these days, a rhetorical retort almost assuredly follows.

The device usually is code for Democrats or other White House opponents. In describing what they advocate, Mr. Bush often omits an important nuance or substitutes an extreme stance that bears little resemblance to their actual position.

He typically then says he "strongly disagrees," conveniently knocking down a straw man of his own making. . . .

A specialist in presidential rhetoric, Wayne Fields of Washington University in St. Louis, views it as "a bizarre kind of double talk" that abuses the rules of legitimate discussion.

"It's such a phenomenal hole in the national debate that you can have arguments with nonexistent people," Fields said. "All politicians try to get away with this to a certain extent. What's striking here is how much this administration rests on a foundation of this kind of stuff" . . . .

Mr. Bush has caricatured the other side for years, trying to tilt legislative debates in his favor or score election-season points with voters. . . .

Campaigning for Republican candidates in the 2002 midterm elections, the president sought to use the congressional debate over a new Homeland Security Department against Democrats.

He told at least two audiences that some senators opposing him were "not interested in the security of the American people." In reality, Democrats balked not at creating the department, which Mr. Bush himself first opposed, but at letting agency workers go without the usual civil service protections. . . .

Straw men have made more frequent appearances in recent months, often on national security, once Mr. Bush's strong suit with the public but at the center of some of his difficulties today. . . .

Recently defending his decision to allow the National Security Agency to monitor without subpoenas [sic] the international communications of Americans suspected of terrorist ties, Mr. Bush has suggested that those who question the program underestimate the terrorist threat.

"There's some in America who say, 'Well, this can't be true there are still people willing to attack,"' Mr. Bush said during a January visit to the NSA.

The president has relied on straw men, too, on the topics of taxes and trade, issues he hopes will work against Democrats in this fall's congressional elections. . . .

"Some people believe the answer to this problem is to wall off our economy from the world," he said this month in India, talking about the migration of U.S. jobs overseas. "I strongly disagree

Another time he said, "Some say that if you're Muslim you can't be free."

"There are some really decent people," the president said earlier this year, "who believe that the federal government ought to be the decider of health care ... for all people."

Of course, hardly anyone in mainstream political debate has made such assertions.

Karl Rove's entire strategy for the Bush presidency was grounded in straw men accusations.  Here's what Bush said in his 2008 speech to the Conservative Political Action Conference, summing up his entire presidency:  "We believe our nation has the right to defend itself -- even if sometimes others disagree."  There, as always, was George Bush, courageously standing against the "anti-self-defense" movement in the U.S. -- also known as "those who oppose torture, illegal spying on Americans, invading and occupying other countries who haven't attacked and couldn't attack us and any other policies George Bush favored."

By contrast, look at one of the alleged "straw men" of Obama's prominently cited by Rove:  "We have chosen hope over fear, unity of purpose over conflict and discord."  Rove objects:  "Which Republican ran against him on fear, conflict and discord?"  How about the people who accused him of "pallin' around with Terrorists" or who said: "Terrorist states are seeking new-clear weapons without delay - he wants to meet them without preconditions.  Al Qaeda terrorists still plot to inflict catastrophic harm on America - he's worried that someone won't read them their rights?" or who accused him of being a "Marxist" and a "Communist" and his wife of being an angry America-hater and who circulated a campaign to convince Americans that he was a secret Muslim and an anti-Semite.  One might also want to include Dick Cheney's 2004 warning that electing John Kerry would mean we would be attacked again by Terrorists and his current warnings that Obama is now making a nuclear Terrorist attack more likely, as well as Karl Rove's very own series of campaigns that relied on little other than standard fear-mongering.

When Karl Rove says these things, does he first delude himself into believing that he opposes and would not use "straw men" tactics of the type which, with a straight face, he's self-righteously condemning today?  Or he is fully aware that he spent the last eight years degrading our discourse with exactly that tactic and is now purposely projecting what he himself did onto Obama?

Either way, Rove, as always, is the living and breathing embodiment of the limitless deceit which our political discourse not only permits but rewards.  Just imagine what it says about our country that Karl Rove -- Karl Rove -- knows he can sermonize against people who "cheapen" rather than "enrich" the "dialogue of our age" without suffering any reputational damage for such side-splitting dishonesty.  To the contrary, other than Matt Drudge, no individual is more adored by the establishment journalists of The Liberal Media.  As Gloria Borger of CNN and U.S. News reverently put it:  "when Rove speaks, the political class pays attention -- usually with good reason."

UPDATE: In 2005, the dignified statesman who disdains straw men because they "cheapen" rather than "enrich" the "dialogue of our age" said this (h/t piniella):

Liberals saw the savagery of the 9/11 attacks and wanted to prepare indictments and offer therapy and understanding for our attackers.

There, Rove was respectfully and substantively critiquing the widespread belief among liberals that the way to address the threat from Al-Qaeda was to offer them complimentary therapy sessions so that they could explore their anger issues.  If I recall correctly, providing free psychologists to Osama bin Laden and his followers was one of the central planks in the Democratic Party platform, so Rove had not only the right, but the responsibility, to critique that widely held position.

As for Rove's claim that Obama was invoking a blatant "straw man" when Obama decried "a philosophy that says every problem can be solved if only government would step out of the way; that if government were just dismantled, divvied up into tax breaks, and handed out to the wealthiest among us, it would somehow benefit us all":   someone should tell Rove about this person called "Grover Norquist" -- unquestionably one of the most influential movement conservatives in the last two decades -- who famously said:  "I don't want to abolish government. I simply want to reduce it to the size where I can drag it into the bathroom and drown it in the bathtub."

Based on this one column alone, any decent society that had even the most minimal standards of honesty and dignity for its political discourse would forever shun Karl Rove.

UPDATE II: On an unrelated note, The New York Times today has an article on the launch of Accountability Now.  As is always true with articles of this sort, one cannot control how the message is conveyed.  There are many terms employed by the article ("liberal" and "left" and "progressive" and "centrist") that aren't accurate in terms of describing the central goal of the organization, but, for purposes of an article like that, the basic theme is correct enough.

UPDATE III: A much more detailed and thorough new article on Accountability Now, from The Huffington Post's Sam Stein, is here.

UPDATE IV: As for the question posed by the title of the post, the reason I asked the question is because, unlike many commenters, I don't think the answer is particularly obvious.  To the extent I have a belief about the answer, it's here.

[T]he president Rove once worked for used straw men so often his speeches were a risk to anyone with hay fever. . . . Bush was the undisputed champion of the straw man argument. When he left the White House, they should have seriously considered retiring the title.

James documents several examples, including ones from Rove himself.  In December, 2006, The Washington Post's Dan Froomkin also documented some of Bush's most noxious and dishonest uses of "straw man" argumentation, adding:

As Anonymous Liberal put it:

Anyone who has paid even the slightest bit of attention to politics over the last eight years knows that straw man argumentation is Karl Rove's specialty. He took the practice to never before seen heights during his years in the White House. So this is like Scott Boras writing a column criticizing other sports agents for driving up player's salaries. Or Donald Trump writing a column criticizing people for naming things after themselves.

Rove's (accurate) belief that he can engage in behavior like this without repercussions says more about our political culture than it does about Rove.