Cheftastrophe! The fifth season boils down to overcooked souffl 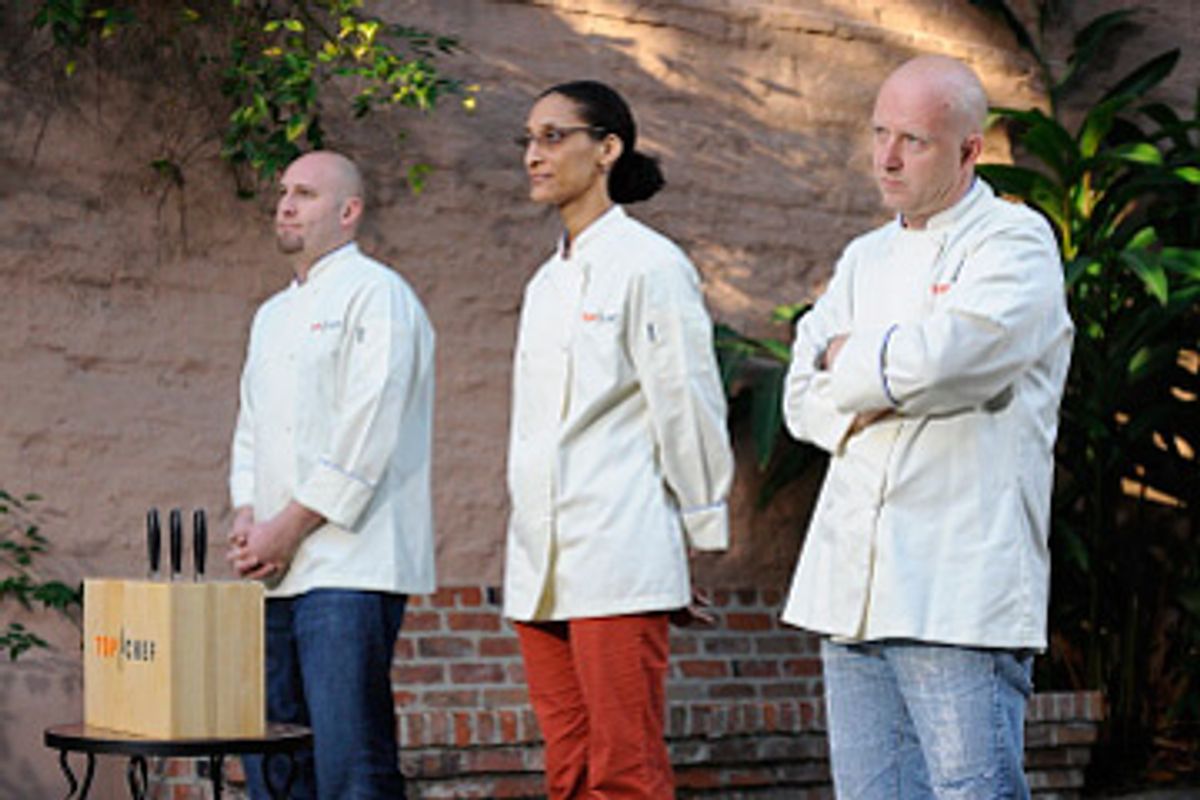 Carla, arguably the frontrunner going into Wednesday night's "Top Chef" finale, has always flirted with disaster during elimination challenges, but somehow she's managed to pull herself out of several tailspins to win big in the end. Even so, when her sous vide steak ended up tough and her blue cheese soufflé proved un-plate-able, her fate was clearly sealed. Despite having gained momentum and impressed the judges several weeks in a row, Carla ended up in tears at Judges' Table, as she explained how her cooking partner, former "Top Chef" finalist Casey Thompson, convinced her that her two worst dishes were good choices.

"It seems that you let your sous chef talk you out of cooking the food that got you to the finale, and I'm not quite sure that I understand that," Tom Colicchio told a devastated Carla.

"I've proven that when I cook my food, it's really delicious," said Carla as tears dripped down her face. "Do I think that my food is good? Yes. When I make it? Yes."

Sure enough, the judges immediately eliminated Carla from their final discussions, which left longtime Carla fans moaning in disgust at the alternatives: Hosea, the wildly annoying chef from Jax Fish House in Boulder, Colo., and Stefan, the arrogant Finn with a catering business in Santa Monica, Calif., two men with somewhat inconsistent performances who've been complaining about each other from the first day of the competition. Could the fifth season of "Top Chef" really boil down to these two? Stefan has proven he's a fine chef, but week after week, his dishes haven't been all that imaginative or particularly inspired. When Hosea wasn't disrespecting his girlfriend at home by making out with fellow cheftestant Leah, he was at least "respecting his protein" as judge Colicchio liked to put it. Even so, aside from failing to overcook or undercook various meats along the way, Hosea has never seemed to possess the flair, taste or talent to take home the big prize.

In the end, although Stefan cooked a squab dish that almost every guest in the room during the final challenge chose as his or her favorite dish, he bungled his carpaccio by freezing the fish in order to slice it more thinly. Mostly, though, his fate was sealed by his choice of a lackluster dessert. Gail Simmons said of Stefan's chocolate mousse and ice cream combination, "To me, it's so completely dated in presentation. This sings 1982."

Hosea, meanwhile, kept the proteins coming, ending his meal with a perfectly cooked venison. "He played to his strengths and I think he did a good job here," Simmons said.

Even Fabio, former competitor and close friend of Stefan's, agreed that Hosea had the stronger dish, and that Stefan had messed up. "Between these two, the strongest one is not the dessert for sure."

There was no way around it. Carla was out. Stefan screwed up two of his dishes. The judges would have to give the fifth title of "Top Chef" to Hosea, one of the most whiny, irritating, inconsistent cheftestants ever to win the big prize. Even the judges seemed to hate giving Hosea the title. "Congratulations, Hosea," Padma Lakshmi said with real regret in her voice. "You are 'Top Chef.'"

The ensuing forced smiles and awkward congratulatory hugs formed one of the most depressing fake celebrations ever witnessed on the small screen. Lakshmi made a big show of giving Hosea a heartfelt hug, while Colicchio grimaced uncomfortably from the sidelines. Fabio rushed over to rub Stefan's bald head sadly. Hosea told Stefan he was "the guy to beat," as Carla stood by, cringing at the inaccuracy of his statement.

Next, we were treated to Carla in a post-celebration interview, weeping openly to the camera. "When I came here, I wanted to show people a different way of competing, to compete with love. So, I did one of the things I wanted to do here."

Compete with love. In other words, lose?

Next time, Carla, compete with the ruthlessness of a predatory beast. Follow your instincts, ignore outside opinions and serve up dishes that make those cocky bastards look like amateurs by comparison.

Sadly, though, Carla was right. Without any way to celebrate such a lackluster winner, the fifth season of "Top Chef" truly ended in disaster.