Harrison Ford stars as a crusty immigration officer in this ambitious, flawed drama about the intersecting lives of Angelenos. 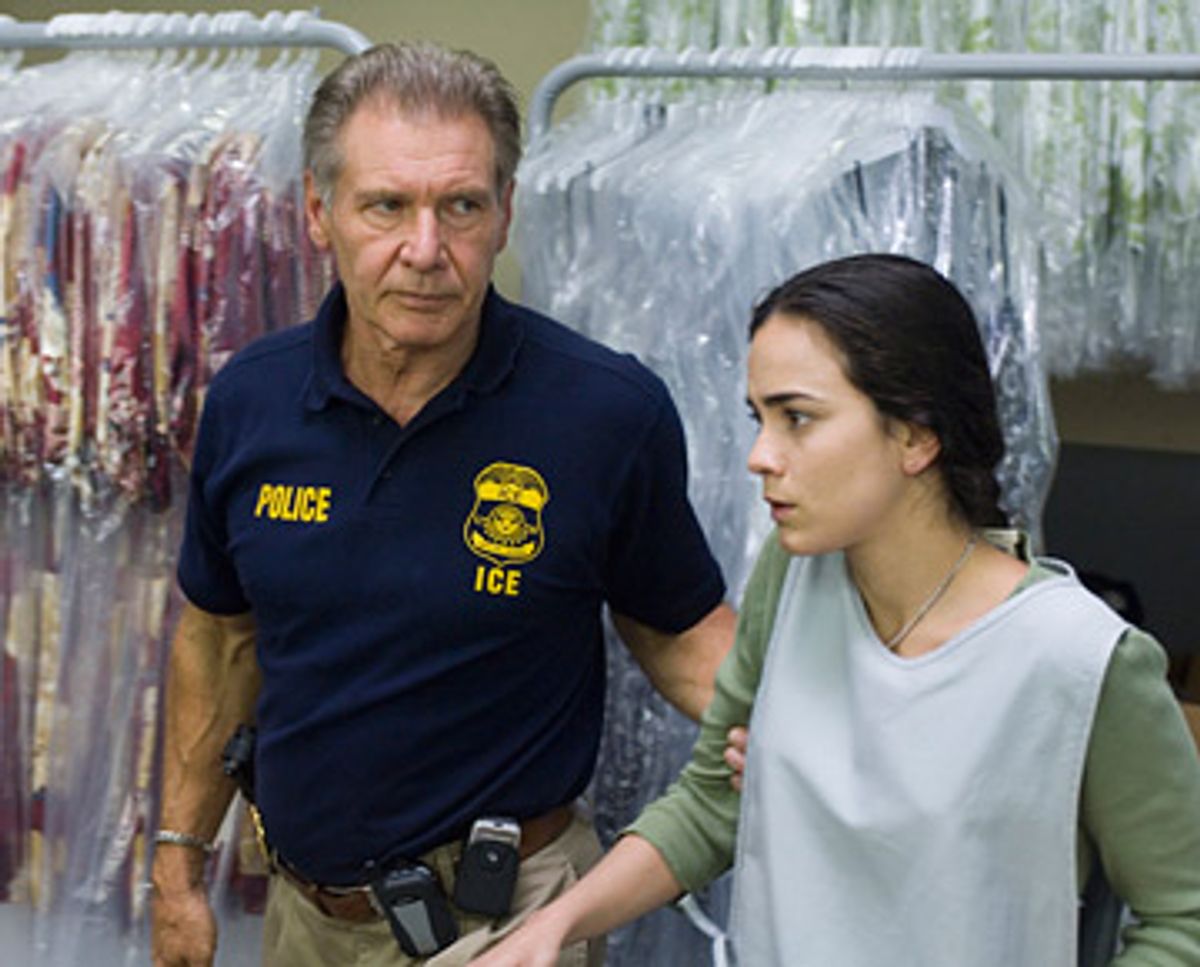 Wayne Kramer's "Crossing Over" is a disappointing picture that suffers from all manner of ills: Both the direction and the dialogue are stiff and awkward, and Kramer -- who also wrote the script -- crams too many not-believable-enough subplots into the movie's "Crash"-style construction. Yet "Crossing Over" is an interesting failure, a movie that at least strives to be about something, entangling itself with the question of what it means to be an American -- or, more specifically, what it means to deserve to live here. There were moments I found myself cringing at the hokey, sentimental dialogue the actors had been asked to deliver. But when I gave the words a moment to breathe, I could see that Kramer was attempting to scale some pretty thorny issues -- chief among them, the idea that anti-immigration sentiment in the United States is tantamount to lousy patriotism -- with a degree of compassion that many filmmakers would be embarrassed to show. The picture has a broad, generous spirit that manages to seep into and smooth over at least some of its flaws.

Like "Crash," "Crossing Over" is set in Los Angeles, a city that's bulging at the seams with people who come from elsewhere to start new lives. Harrison Ford plays Max Brogan, an Immigration and Customs Enforcement officer who effects a crusty, hardened facade (the sort of role Ford, at this point, can play in his sleep). His partner, Hamid (the New Zealand-born actor Cliff Curtis), is a naturalized citizen from a family who came to the States from Iran; Hamid's father (played by Marshall Manesh) is looking forward to his own upcoming naturalization ceremony, and Hamid has urged crotchety old Max to attend the family celebration.

Meanwhile, in another subplot, Gavin (Jim Sturgess), a young English musician, and his Australian girlfriend, Claire (Alice Eve), have come to Los Angeles to make it in the entertainment industry and are desperate to stay, even though their visas are running out. Ray Liotta plays Cole Frankel, an applications adjudicator who has the power to grant green cards, ostensibly a good guy to know; his wife, Denise (Ashley Judd), is an immigration defense attorney who has become deeply involved in the case of a small girl from an African village (played by Ogechi Egoni) who has been orphaned.

But wait, there's more: A young Mexican factory worker (Alice Braga) who's desperate to make a better life for her young son; a Bangladeshi teenager (Summer Bishil) who lands in hot water after writing a class paper that's perceived (with some good reason) as being sympathetic to the 9/11 terrorists; a Korean teenager (Justin Chon) who falls under the influence of some troublemaking peers; and Hamid's sister, Zahra (Melody Khazae), who has dishonored her family by acting, and dressing, in ways that they deem immoral.

The plotlines in "Crossing Over" overlap and intersect in ways that often seem haphazard; other times, they're too calculated. And some of the relationships that develop between the characters (most notably the one between Liotta's Cole and Eve's Claire) seem forced as a way of heightening the drama. But there is a method to some of the madness here: Kramer may forge some unbelievable situations, but he does so in order to hang believable emotions on them. That's why, when Ford's Max becomes overly involved in a family situation that's directly caused by one of the raids he makes in the line of duty, it's easy to see why he can't sleep at night (literally) unless he does the right thing: His job is a tough one, but he tries to approach it with integrity, and Ford plays that balance beautifully without ever letting the performance go soft. There's also a brilliant and funny scene in which a rabbi (played by Roger Marks) decides the fate of one of the immigrants here. To describe it would give away the pleasure of watching it unfold, but it's a lovely example of the way it's sometimes necessary for human beings to follow their instincts instead of strictly following the rules.

What Kramer is trying to do, with varying levels of success, is to get at the way those of us who have never had to make the conscious choice to become U.S. citizens may not always fully grasp the advantages we have here. At one point, a character makes a flowery speech about his own naturalization ceremony. He calls it the "most spiritual moment of my life." I blanched when I heard those words -- they're overwrought, and some people around me in the screening room tittered.

But sometimes it's too easy to laugh at movies that seem unsophisticated or melodramatic. And when I heard those words in the script, I had a feeling that Kramer -- who came to the States from his native South Africa in 1986 -- had written them from his own experience. The movie's press notes confirmed that. Kramer talks about the day of his own naturalization: "You see faces from almost every country in the world. It's surreal because they're nothing like you, but you all have joined together because you believe in the country and the Constitution."

Kramer is a talented filmmaker with an uneven record: In 2006 he made "The Cooler," an extremely well-crafted picture that suggested a promising future; his 2006 release, "Running Scared," was a gratuitous and not particularly deep thriller. But "Crossing Over," flawed as it is, seems to be a step in the right direction for Kramer. He's an openhearted filmmaker striving to keep his emotion and his intellect working in tandem. Most of us good lefties laugh derisively when we hear some blowhard right-winger spout Amurica-is-for-Amuricans nonsense. But the flip side of that sentiment -- the idea that people might want to come here because they believe in the actual ideals America was founded on -- isn't anything to laugh at, and that's an idea "Crossing Over" makes clear. Kramer is trying to take the argument beyond the division between conservative and liberal values. Sometimes it takes an outsider to see some of the advantages, spiritual and material, the rest of us take for granted.