This is not George Bush's budget

Budgets are about priorities, not numbers, and President Obama's first budget marks a sea change from the past eight years. 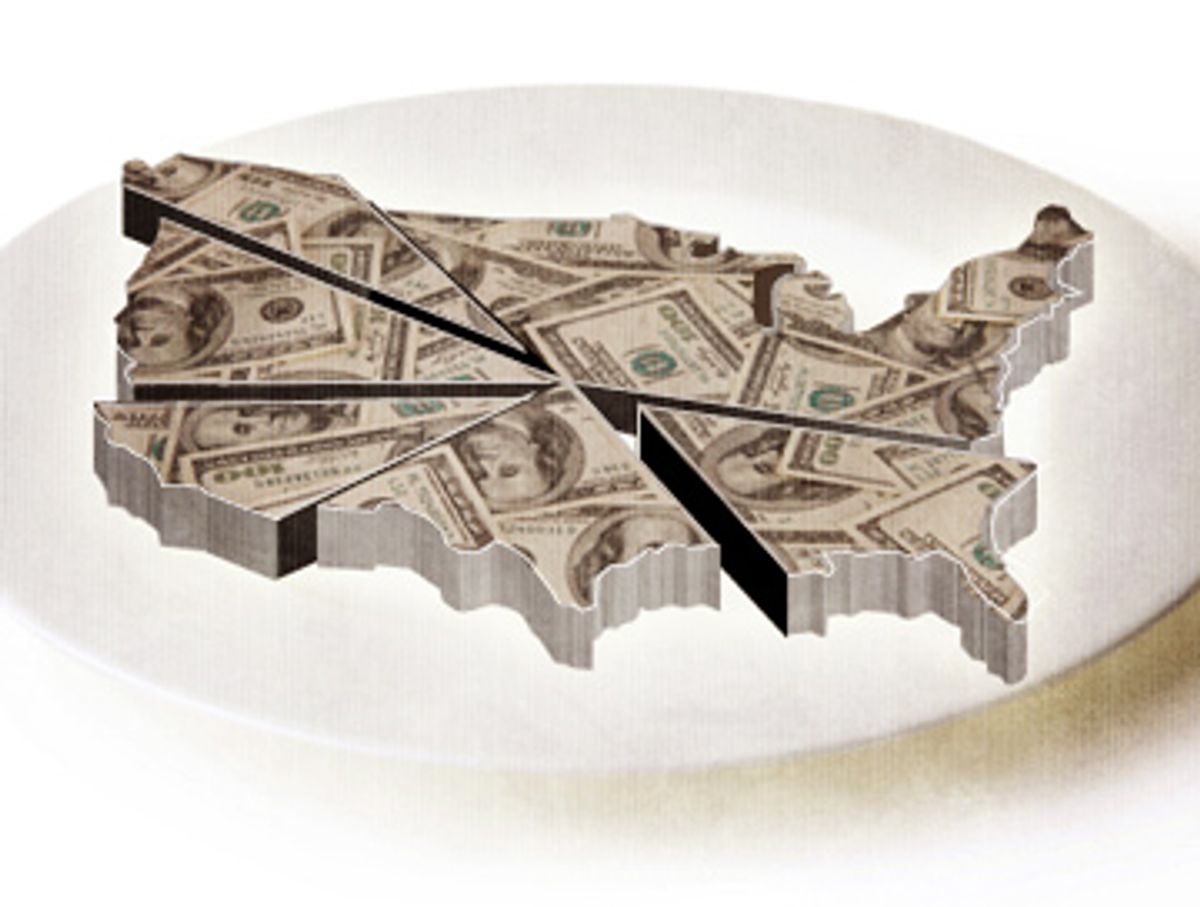 "Elections have consequences" is one of those political clichés that gets thrown around a lot in this city, especially in the first few months of a new administration. But President Obama's $3.5 trillion budget proposal, released Thursday, actually reminds you that clichés become clichés for a reason: They're true.

The 142-page proposal laid out a sweeping, ambitious agenda for the future: Obama would raise taxes on the wealthy to pay for healthcare for the uninsured; cap pollution emissions; put billions more dollars into infrastructure and new technology, building on the money in the massive economic stimulus program Obama already pushed through Congress; invest in new education programs; and roll back the U.S. troop presence in Iraq and, more slowly, Afghanistan. There were proposals to save money by modernizing the healthcare system, only paying for treatments that are proven to work, and by eliminating federal farm subsidies to the biggest and wealthiest recipients, mostly agribusiness interests. This is not, in other words, George W. Bush's budget.

"A budget is more than simply numbers on a page," Obama said Thursday morning. "It is a measure of how well we are living up to our obligations to ourselves and one another. It is a test for our commitment to making America what it was always meant to be -- a place where all things are possible for all people."

Of course, in other ways, it is George W. Bush's budget, and then some; though Obama and his aides spent the last week talking about the importance of fiscal responsibility, and promising belt-tightening to come, the proposed budget would still lead to record federal deficits. For fiscal year 2010 alone, the first year covered by Obama's proposal (which begins on Oct. 1), the government would run a deficit of nearly $1.2 trillion. That had Republicans shrieking Thursday, though the GOP wasn't anywhere near as outspoken about Bush's budget-busting administration -- which Congress happily enabled when Republicans controlled it.

"Where is the spending restraint?" asked Sen. Judd Gregg, R-N.H., who was all set to join Obama's administration as commerce secretary until he (allegedly) realized he didn't actually agree with him on economic policy.

Administration officials had a ready answer to any complaints about the deficit -- it wasn't their fault. Office of Management and Budget director Peter Orszag started off a briefing for reporters by saying Obama's White House had inherited two different $1 trillion deficits from Bush. The first one, caused by the crumbling economy, represented the difference between what the country's economic output should be and what it will be this year; the second was the actual federal budget deficit left by the previous administration. If the government simply stuck to Bush's policies for the next 10 years, Orszag said, the deficit would eventually reach $9 trillion.

While Republicans focused on the sheer size of the deficits, the proposed tax increases also loomed as a political flash point. Obama would let the Bush tax cuts expire next year, as scheduled, instead of wiping them out this year, as he once suggested; the administration decided the recession is too severe to risk raising any taxes immediately. But starting next year, families making over $250,000 would see new limits on the size of the tax deduction they can take for charitable donations (which isn't likely to please nonprofits already struggling for money thanks to the economy). The administration had an answer for that, too -- it's unfair, Orszag said, to let a rich donor get a larger tax break than a middle-class donor would if they each gave the same amount of money to a charity.

The biggest change, from an accounting standpoint, had to do with what the budget acknowledges. Every year since 2003, the existence of a war in Iraq has, evidently, caught the federal government completely by surprise. Months after the Bush administration released its budget plans for the year, officials would remember that there were thousands of troops fighting overseas -- who needed billions of dollars in federal cash -- and send an "emergency" request for funds to Capitol Hill. Natural disasters, which strike the U.S. every year, were treated the same way. Obama's budget covers 10 years, instead of the five-year horizon Bush used, in order to show the long-term effects of his policies. And over the next 10 years, it includes $3.7 trillion that was always kept out of the official budget, but was spent anyway, by the previous administration.

"For too long, our budget has not told the whole truth about how precious tax dollars are spent," Obama said. "That kind of dishonest accounting is not how you run your family budgets at home; it's not how your government should run its budgets, either. We need to be honest with ourselves about what costs are being racked up -- because that's how we'll come to grips with the hard choices that lie ahead."

Obama's aides indicated they think the economy will recover quickly -- the recession, according to the projections the administration used, will end next year, and the economy will grow by 3.2 percent. Christina Romer, the head of the Council of Economic Advisors, defended the numbers, but she hedged them a little: "We are economists, not soothsayers."

In the end, exactly how much Thursday's release will really mean is unclear. The annual posting of the White House budget outline always sets off a frenzy in Washington, one that's vastly out of line with what the document actually means. Various interest groups and local lawmakers pore over the White House proposal looking for ways to be outraged by it; the media breathlessly reports proposed cuts and increases alike as if the budget proceeded, magically, from the Government Printing Office into law. In fact, for better or for worse, Thursday was just the beginning of a long, often tortuous process.

Because this is Obama's first year in office, the administration won't release detailed budget numbers until April. After that, in theory, Congress has to write, debate and pass a budget resolution, plus 12 different appropriations bills, before most of the ideas in the White House proposal ever have any actual impact. But most years, lawmakers can't quite manage to do that; several times during the Bush administration, Congress never bothered to pass a budget resolution, and it's rare that all 12 spending bills are handled individually. (The $410 billion omnibus spending bill the House passed Wednesday wrapped nine of the usual 12 up in one messy package.)

"People think budgets are about numbers, but they're really about priorities," said Steve Ellis, vice president of Taxpayers for Common Sense, a budget watchdog group that tends to hound Republican and Democratic presidents alike about spending. "You put additional specificity into what you care about, and you obfuscate or defund things you don't. You can't help but think about smoke and mirrors when you talk about budgets."

Even so, the priorities Obama laid out Thursday couldn't be more different from those of his predecessor. But putting the budget document out is the easy part. Now Obama has to sell everything in it. Otherwise, this election won't turn out to have quite so many consequences, after all.