A Southern Gothic legend is hard to find

Flannery O'Connor wrote two novels and died young, but her influence has been vast. Why has it taken half a century for her to get a definitive biography? 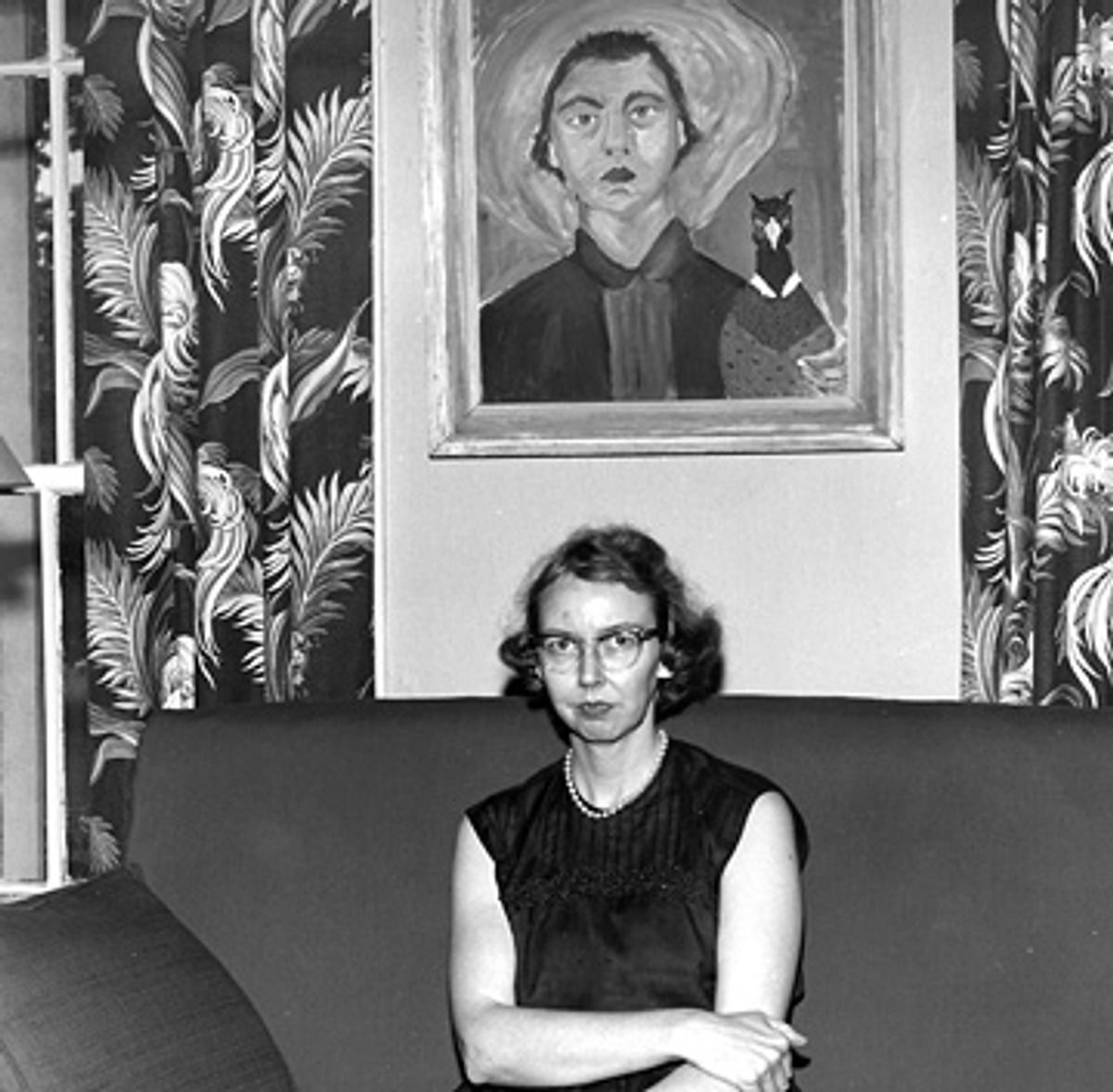 Has any other 20th century American author with so little published output – virtually everything she wrote for publication and a few things that she didn't fit neatly into a single Library of America volume – had such an enormous influence on American literature? Mary Flannery O'Connor published just two novels, "Wise Blood" (1952) and "The Violent Bear It Away" (in 1960, three years before her death at age 39 from kidney failure brought on by lupus) and two collections of stories, "A Good Man Is Hard to Find" (1955) and "Everything That Rises Must Converge" (1965). Her influence on literature over the last half-century is enormous, from Alice Walker (who read O'Connor's stories "endlessly" while in college and was "scarcely conscious of the difference between her racial and economic background and my own") to novelists as radically different in temperament as Walker Percy and Cormac McCarthy. The wonder is that it took half a century for her to get a definitive biography, Brad Gooch's "Flannery: A Life of Flannery O'Connor."

More than any other American fiction writer of her time, her influence has gone beyond literature to the realm of American popular culture. Tommy Lee Jones, who wrote his college thesis on O'Connor, seemed to be directing under her spell in his film "The Three Burials of Melquiades Estrada." Randy Newman and Bruce Springsteen have both recorded albums that sound like background music to her world; Springsteen admitted he wrote and recorded his album "Nebraska" while reading O'Connor. The chilling ending of "A Good Man Is Hard to Find" is echoed in the title song from that album. In O'Connor's story, two escaped convicts murder a family, including a grandmother, in cold blood:

"Shut up, Bobby Lee," the Misfit said. "It's no real pleasure in life."

Springsteen's narrator, Charles Starkweather, after murdering 10 people, tells the man about to pull the switch on him that at least for a while he and his girlfriend "had some fun," and then, before the electricity surges, attributes his murderous impulse to "just a meanness in this world."

O'Connor's subject in fiction, she once said, was "the action of grace in territory held largely by the devil. I have also found that what I write is read by an audience which puts little stock in either grace or the devil." Most likely she would have been disappointed to find that her work did little to sustain the twin passions of her life: Catholic writing and the Southern tradition, both of which she devoted much time to lecturing about (those to whom both issues are still important can find her discussions collected in "Mystery and Manners").

She brooked no argument from nonbelievers who thought her Catholicism to be artistic or intellectually restricting. Like G.K. Chesterton, she insisted that the free will essential to Catholicism also freed the imagination. As she stated in a college address about a year before her death, "The Catholic novelist believes that you destroy your freedom by sin; the modern reader believes, I think, that you gain it in that way. There is not much possibility of understanding between the two." Those enthused by O'Connor's work never found her orthodoxy to be off-putting (as evidenced by the superb film made from "Wise Blood" in 1979 by a craggy old skeptic named John Huston). As an editor Gooch quoted phrases it, "This girl is a real novelist. She is already a rare phenomenon: a Catholic novelist with a real dramatic sense, one who relies more on her technique than her piety."

That technique, honed at the Iowa Writers Workshop -- the details of the chapter on her time there is one of the best in "Flannery" and one of the best accounts of a writer's development in recent literary biography -- was as identifiable as any 20th century American writer. A line from Flannery O'Connor is as singular and distinctive as anything written by Hemingway and invariably more humorous.

For instance, O'Connor wrote of a female character in "A Temple of the Holy Ghost": She knew that "She could never be a saint, but she thought she could be a martyr if they killed her quick."

-- In "A Late Encounter With the Enemy," 104-year old General Tennessee Flintrock Sash ruminates, "Living had got to be such a habit ... that he couldn't conceive of any other condition."

-- Of "Wise Blood's" Hazel Motes, the founder of the "Church of Christ Without Christ" (a Christianity purged of the New Testament?), a character says, "I like his eyes. They don't look like they see what he's looking at, but they keep on looking." "Protestant," asks a character suspiciously about the nature of Hazel's church, "or something foreign?"

-- The son of an old lady in "Everything That Rises Must Converge" "lived according to the laws of her own fantasy world, outside of which he had never seen her set foot."

-- And in the opening sentence of "The Displaced Person," "The peacock was following Mrs. Shortly up the road to the hill where she meant to stand." (O'Connor loved the birds and raised more than 100 on her farm.) And "Europe stretched out in Mrs. Shortly's imagination, mysterious and evil, the devil's experiment station."

Phrases like "threadbare elegance," "moral moron" and "pure idiot mystery" went from O'Connor's typewriter into the Southern lexicon without most who use them knowing of their origins.

"There won't be any biographies of me," O'Connor famously said, "because, for only one reason, lives spent between the house and the chicken yard do not make exciting copy." She was right in one sense, her life wasn't exciting: few men (just one serious beau before her life was changed forever by the onset of lupus), no real feuds and no scandals. Gooch, a professor of literature at William Paterson University in New Jersey and author of a superb biography of Frank O'Hara, "City Poet," makes chicken and dumplings out of the chicken yard. He lingers over the atmosphere of her upbringing in Savannah, Ga., and later her life in the small town of Milledgeville, Ga., and highlights her literary friendships with Robert Lowell, Thomas Merton, Elizabeth Bishop, James Dickey and others.

"Flannery" sweeps away myriad myths that have built up around O'Connor's life: She was not an eccentric recluse but in fact worked hard to maintain relationships when lupus confined her to the family farm, a period of life in which she insisted "I'm a writer, and I farm from the rocking chair." She wrote in the tradition of Southern fiction but was not of it. She was raised in sophisticated Savannah, where Irish Catholic families "had a double loyalty -- to Confederate Memorial Day, and to St. Patrick's Day, with St. Patrick winning by a nose." As Gooch makes clear, her Catholicism was a lens through which she saw the Protestant South through an outsider's eye. She wasn't really exposed to the Deep South's anti-Catholic sentiments until, when she was 13, the family moved to Milledgeville -- "'Our Town,'" says Gooch, "done with a middle-Georgia drawl." Unlike William Faulkner and Carson McCullers, she saw the post-Confederate South from the outside, once confessing, "I sure am sick of the Civil War."

In "The Tale Bearers," V.S. Pritchett wrote that she was "born too late to be affected by the romantic and nostalgic legend of the tragic South: the grotesque for its own sake means nothing to her." The South reflected in the literary Gothic tradition was vanishing even as O'Connor wrote about it; by the time of her death in 1964, a Catholic president had been elected, the civil rights movement was in full swing and Kentucky Fried Chicken, the Atlanta Braves and the Allman Brothers were just around the corner.

But there was still plenty of material to draw from. "Mary Flannery is a sweet girl," protested one of her neighbors, "but I'm afraid to go near her. She might put me in one of her stories." She probably did. When asked why Southern writers had a penchant for writing about freaks, she replied, "Because we are still able to recognize one." The violence that erupts in O'Connor's fiction summons up the demons of an earlier time.

Gooch captures the backdrop but is not quite as comfortable in his critical evaluations of O'Connor's work. One yearns to see a bit more of a connection between O'Connor and Irish writers, both Catholic and Protestant, who preceded her. She drops the names of Joyce and Yeats teasingly and affectionately in her stories, and she seemed to be more at ease with them than with most Southern Protestant writers. She kept what Gooch calls "a respectful distance from the master -- 'I keep clear of Faulkner so my own little boat won't get swamped,' she insisted" -- but had little respect for most of her other contemporaries. O'Connor rightly dismissed Harper Lee's "To Kill a Mockingbird" as "a wonderful children's book," and abhorred frank sexuality in any form, particularly the strong homosexual undertones in the work of Tennessee Williams and Truman Capote. ("Mr. Truman Capote makes me plumb sick, as does Mr. Tenn Williams," she once wrote.)

Most curiously, she claimed to "dislike intensely" the fiction of her fellow Georgian, Carson McCullers, a sentiment that was apparently reciprocated. McCullers' life and work seems to have come into being in order to be compared and contrasted with O'Connor's. The two were almost exact contemporaries. McCullers was born in 1917, O'Connor in 1925; McCullers died in 1967, three years after O'Connor. McCullers, too, died relatively young, at age 50, after a life plagued by illness, and is also known essentially for four works of fiction. Gooch tells us that in her story "A Temple of the Holy Ghost" O'Connor blatantly took elements from McCullers' "The Member of the Wedding." Their work appears, at least at first glance, to have more similarities than differences, and one wishes Gooch had delved more deeply into a comparison of their work and the reasons for their mutual animosity.

One would also like to see more specifics on how O'Connor was influenced by Kafka and, particularly, by Poe -- the latter an interesting point as the influence wasn't from Poe's Gothic tales, as has been thought, but from his all but forgotten humorous tales.

Gooch, alas, is a biographer, not a critic, and a good biographer is hard to find. He doesn't seem to share her affinities for Catholicism and the rural South, but a biographer who did would more than likely end up flag waving for O'Connor and thus marginalize her place in American letters. On the plus side, he does not, as many critics have, try to impose a fatalism on her born from her lupus; O'Connor would have praised him for this, as she once stated in no uncertain terms, "My lupus has no business in literary considerations." Nor does Gooch try to dispel the mystery of her fiction through overemphasis on the biographical details behind them; O'Connor insisted that "any story I reveal myself in completely will be a bad story."

He nonetheless does the best job a biographer can do of outlining and describing the life of a writer who now appears to us as the avatar of a past still strongly felt but only dimly remembered. In the Nov. 21, 2008, issue of Commonweal magazine, Paul Elie (whose 2004 book on 20th century Catholic writers, "The Life You Save May Be Your Own," took its title from an O'Connor story) suggests that her work will make sense when "the Protestant South is the territory of Central and South America," but even then one suspects that an enigmatic core will remain. O'Connor once declared that she could "wait a hundred years for readers." Well, she's more than halfway there, and thanks to Gooch's "Flannery," the number will grow.