Everybody must get stoned

A new plan to legalize marijuana in California would create a $1 billion tokin' tax and thousands of green jobs. Now that's a stimulus plan! 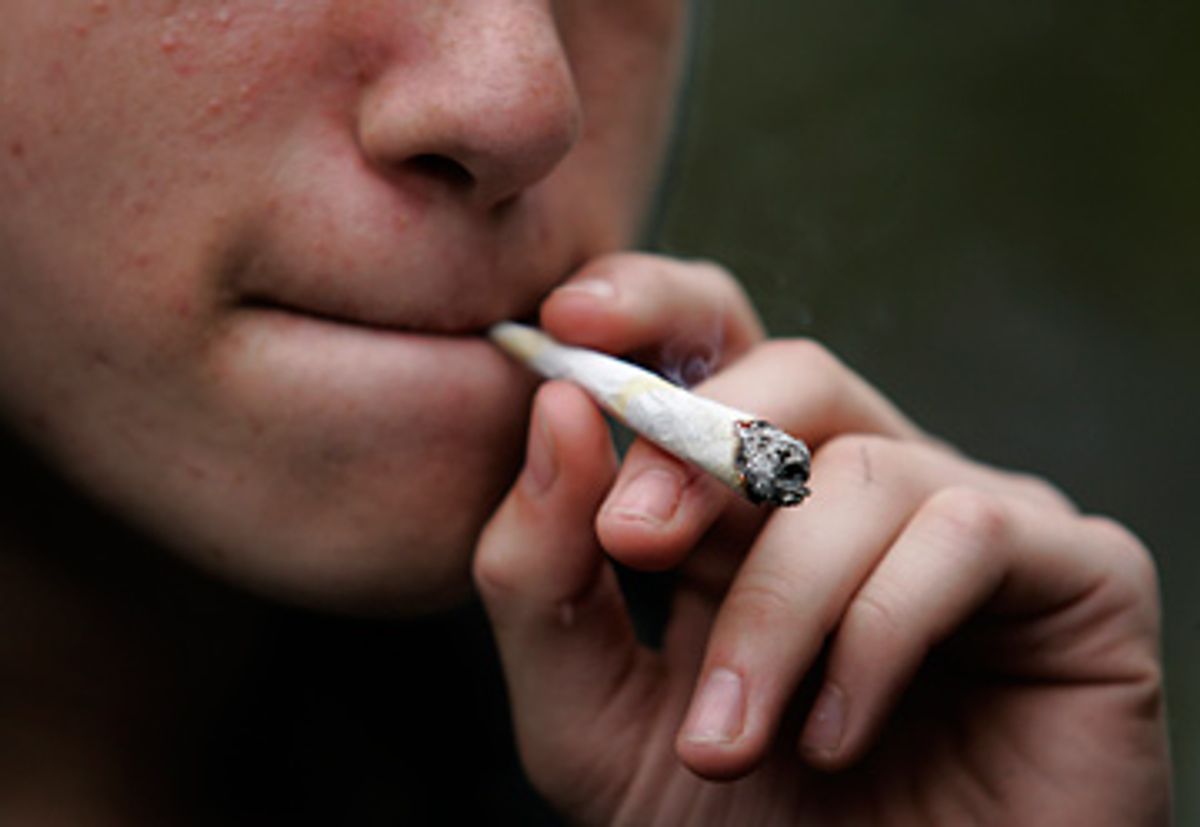 Can Californians help dig themselves out of their historic fiscal crisis by getting high? Tom Ammiano thinks so, and he isn't smoking a thing.

On Feb. 23, the California State Assembly member introduced legislation that would regulate the cultivation and sale of marijuana, and then tax it. By legalizing pot, the San Francisco lawmaker argues, the state could reap huge new revenues. Currently pot is California's biggest cash crop, with annual sales reaching $14 billion. Vegetables, the state's second hottest agricultural product, take in a mere $5.7 billion. And California's famous grapes? A piddling $2.6 billion.

If passed, the Marijuana Control, Regulation and Education Act would give California control of pot in a manner similar to alcohol, while prohibiting its purchase to citizens under age 21. The state's tax collectors estimate the measure would bring in about $1.3 billion in new revenues a year.

Ammiano, a former schoolteacher and stand-up comedian, has been one of the most famous activists and politicians in San Francisco for decades. In the late '70s, he jump-started the movement against the Briggs Initiative, which would have banned gay teachers in California (he appeared as himself in the film "Milk"), served on the San Francisco Board of Education, and later was president of the San Francisco Board of Supervisors. Salon recently spoke to him about why he thinks making pot legit would have California smiling.

Why legalize marijuana in California now?

There's gold in them thar hills! We have one of the worst budget situations we've ever had, and it's a $14 billion industry that's not going away. Everybody knows this and nobody has wanted to go after it. I, frankly, think the time has come.

Even if California did regulate and tax selling marijuana, wouldn't it still be illegal at the federal level?

Federal law preempts a lot of things we've done in California, anyway -- domestic partners, gay marriage, the medical use of marijuana. Certainly the Obama administration has been telegraphing they'd like to revisit the failed war on drugs. New Attorney General Eric Holder just issued an edict: No more raids on medical marijuana dispensers. And, man, if that doesn't reinforce what I have been saying, I don't know what does. Of course, everyone likes to be in the position of saying, "See, I told you I was right."

In many ways, it's common sense. You have drug cartels growing marijuana in our national parks. It's no more the hippie-dippy guy or woman in Humboldt. This is organized crime with no morality and no value of human life. Look at the money you would save in law enforcement by regulating marijuana, decriminalizing it and putting those resources into serious crimes. The black market and the street sales would decline. Pumping $1 billion into our economy is going to provide a lot of green jobs. No pun intended. Obama seems to be a bright-enough guy to realize that.

How would your legislation affect the people in prison for nonviolent drug offenses related to marijuana?

That would be another cost savings. If it's decriminalized, the source dries up, and you stop the flow of people into prison.

How do you imagine marijuana being sold? Would it be in bars and restaurants and corner stores?

All of that is to be determined. We don't want it to be for anyone under 21. You still can't drive under the influence of it. But the broader thing for me is getting it decriminalized, through the law, and then coming up with the regulations.

Do you think legalizing it endorses its use?

It's use is there anyway. People do it everywhere. It's better if you have a situation, like with booze, when you regulate it. If you're smoking the legal product, you're an adult, and it's not full of pesticides, additives or other crap. The environment would benefit because a lot of these rogue plantations pollute the water source and deplete the soil. The growers pull up and walk away without any kind of remediation. You have to admit to reality here. I think everyone has been on this big denial trip.

Don't you think you're going to see resistance because of the idea that pot is a gateway drug that leads to other illicit drugs?

A lot of those issues came up around medical marijuana, and most of them were put to rest. But there are always going to be people who believe that no matter how many statistics you give them.

I have no idea. But I know there are a lot of statistics around marijuana usage, and a lot of the reefer madness fears are not substantiated.

Do you really expect this bill to pass? Or do you want to spark a debate and get a conversation going?

Getting the conversation going is definitely part of it. But getting it passed is my goal. I do have support from a lot of colleagues, who say: "Oh my God, I think this is great, but I don't think I can vote for it." So it's going to be my job, even in conservative areas, to say: "Vote for it. This is something that will help your community. You may be a Republican, you may be conservative, but your health clinic just closed, your husband just go laid off." These are the kind of bread-and-butter issues that are going to be very seductive to people.

Have you smoked pot?

I certainly experimented. But I'm more of a martini guy.

What do you say to the Bill O'Reilly types who will protest that "San Francisco values" will infect the whole state and even the country?

We're a city that has done a lot of progressive things that have been beneficial on a social justice level, and the world did not end. So we have nothing to be defensive about. In fact, other countries laugh at us for our drug laws. Britain, Canada, the Netherlands and most of Europe have very liberalized drug laws in and around harm reduction.

God knows what Bill O'Reilly does. I'd hate to see his pharmacy bill.