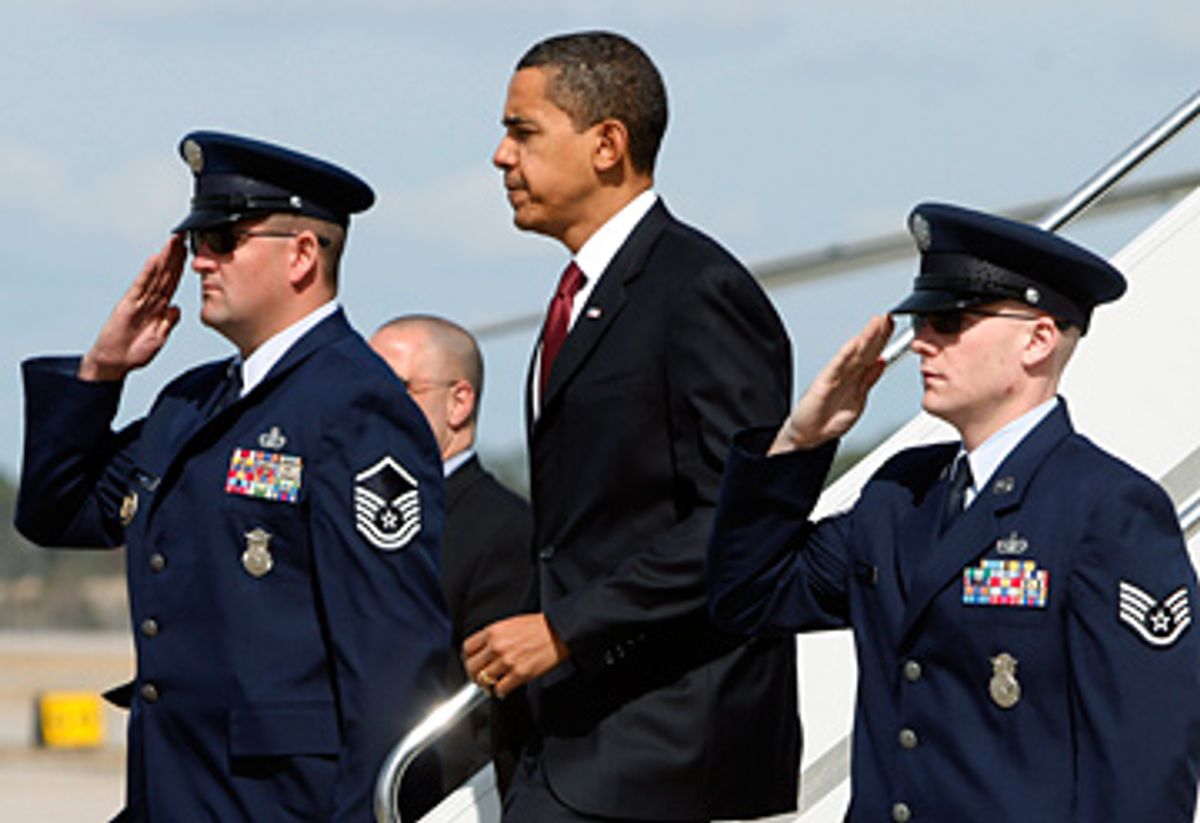 On Friday, President Obama told the country that he will bring the Iraq war to an end. In a speech to the Marines at Camp Lejeune, N.C., Obama said that he would withdraw all combat brigades by Aug. 31, 2010, and withdraw all troops by the end of 2011, in accordance with the Status of Forces Agreement between the U.S. and Iraq.

Very little in Obama's speech was a surprise. During his campaign, he pledged to withdraw U.S. combat troops within 16 months after taking office. After consulting with his generals, who argued that period should be extended to 23 months, he compromised by making it 19 months. That was the only real difference between his campaign position and the plan he announced Friday.

But if it wasn't surprising, his speech was nonetheless momentous. It was his first official statement about how he intends to end one of the longest, costliest and most controversial wars in U.S. history. It's worth taking stock of the provisional balance sheet of the war, as it begins its final phase. Obama is doing the right thing by winding down Bush's disaster in Iraq. But he is showing ominous signs of continuing his predecessor's policies in Afghanistan and Pakistan.

Democratic lawmakers generally praised the speech, although some questioned the size of the residual force of 35,000 to 50,000 troops that Obama said he would leave in Iraq to train Iraqi security forces, carry out counterterrorism missions and protect U.S. military and civilian personnel. Most liberal commentators also cautiously applauded it, but expressed concerns about the fuzzy distinction between "combat" and "non-combat" troops. The overriding concern on the left was that Obama might end up continuing the war indefinitely, overriding the SOFA agreement and sending the supposedly non-combat troops into endless counterinsurgency battles.

In general, Republicans and war supporters praised the speech, while attempting to claim that it somehow vindicated not just Bush's "surge" but the war itself. The Weekly Standard's reaction was typical: "There are many on the loud-mouthed left who are too dim to understand it, but this was Bush's gift to his successor." Even the farther-right-than-Attila editorial page of the Wall Street Journal praised Obama's plan.

Indeed, Obama took more heat from the left than the right -- another indication of the Mobius-strip nature of this strangest of wars. Chicago Tribune columnist Steve Chapman accused Obama of backsliding on his campaign promise to end the war expeditiously, saying "he has moved a long way toward Bush's view that we cannot leave until some sort of victory or success has been achieved." Antiwar's Justin Raimondo went further, painting Obama as a slick fraud who is disguising an endless continuation of the war as a pullout, and is about to compound his Iraq error by launching a major escalation in Afghanistan.

"What kind of a 'withdrawal' is this?" Raimondo wrote. "It is one so burdened with contingencies, conditional footnotes, and amendatory clauses, that it falls beneath its own weight and collapses into a fair approximation of the status quo ... It will take a couple of shiploads of flag-draped coffins -- and perhaps a couple of alarming incidents in Afghanistan and environs -- to wake up Obama's liberal supporters to what they're presently enabling with their silent complicity."

In the Nation, Robert Dreyfuss wrote, "It's hard not to take a glass-half-empty attitude toward President Obama's Iraq speech today -- especially when John McCain is praising his policy and prominent Democrats are criticizing it."

Obama's critics on the left fear that he is morphing into Bush II before their eyes. But Obama is no Bush, and all indications are that he means what he says. He is going to end this catastrophic war, but in a way that is in both America's and Iraq's interest. No doubt there is also an element of political self-interest involved: Obama is warding off future accusations that he "lost" Iraq. But even that political calculation is justifiable: If the right was able to claim that Obama "lost" Iraq, they would be able to keep their disastrous "war on terror" ideology alive.

The truth is there is no right way to leave Iraq. The left argues for immediate withdrawal; the right insists that we must stay until "victory." The right's view has been clearly discredited: No one knows what victory means anymore, and after six endless years of being told that a decisive breakthrough is just around the corner, the American people are unwilling to keep chasing that $3 trillion rainbow.

But there's no guarantee that an immediate withdrawal would be the wisest move either. As Juan Cole pointed out in Salon, there are legitimate reasons for the deliberate pace of troop withdrawals mandated by Obama. The Iraqi parliamentary elections are scheduled for December, and without U.S. protection, those elections could be disrupted. Surely the ultimate moral basis of the left's opposition to the war is that it harmed Iraq and its people. And so the least Obama can do, while ending this sorry chapter in our history, is ensure the best possible outcome for the nation and people we have so grievously harmed. Does anyone on the left really believe that we should imperil Iraq's future simply to make an ex post facto point that the war was a dreadful idea to begin with? What kind of twisted moral universe is that?

But the left has a powerful counterargument. There is always some important event coming up in Iraq that requires a U.S. presence, and there will never be a magic moment when we know we can safely leave. Every day that it continues it endangers American troops and acts as a recruiting poster for jihadists. So why not just leave now?

Faced with this unsolvable moral, tactical, strategic and political conundrum, Obama has chosen a middle path. And that's a justifiable choice.

Both pro-war and antiwar commentators have pointed out that a Republican president might have done exactly the same thing, although they interpreted that fact in opposite ways. The right claims that Obama's speech vindicates not just the surge, which they assert produced the relative calm that made Obama's speech possible, but the war itself. The left is fearful that Obama is going to continue Bush's misguided war.

Both sides are wrong. The right's argument that Obama's speech somehow represents a vindication of the war is laughable. The relative calm in Iraq (which still is one of the most dangerous places in the world) may represent a partial vindication of the surge, although the surge was not the only reason for the reduction in violence. Bribing the Sunnis to help the Americans may have played a larger role than the extra boots on the ground. The fact that much of Iraq had already been ethnically cleansed may have played a larger role than either. Even if we accept Thomas Ricks' argument that the surge was the major factor in reducing violence in Iraq, it did not succeed in achieving political reconciliation. That's why Iraq is still fragile, and could fall back into chaos after the U.S. leaves.

Above all, the surge was merely a tactic. It does not vindicate the war itself. That's like saying the Confederate victory at Chickamauga in 1863 vindicated the South's decision to start the Civil War.

The hawks' position has always been that the war was necessary to protect America, defeat "Islamofascists" and remake the Middle East. During the campaign, they slammed Obama for planning to cut and run before victory, which they defined as leaving Iraq a self-sufficient, responsible, cohesive, pro-American state. McCain famously said that "Sen. Obama would rather lose a war to win a campaign." But now Obama is doing pretty much what he said he was going to do during the campaign, and McCain supports Obama's plan. What happened?

Reality happened. After thundering that timetables were treasonous, the Bush administration was forced to agree to the Status of Forces deadline imposed by Maliki's fundamentalist, pro-Iranian regime. That pretty much put an end to the right's claims that it was going to fight until "victory." And the coup de grace was applied, ironically, by the U.S. generals who have now signed off on Obama's plan.

Both the Bush administration and the American right completely abdicated to the generals. They turned the geo-strategic decisions that are the province of the civilian command over to the top brass. By treating Gens. Petraeus and Odierno as if they were Roman consuls, they tied themselves to whatever they said. Now that the generals, under a new commander in chief who has a different geo-strategic vision, have pronounced that American troops can leave at a certain date, the war hawks have no grounds to object. In effect, their position is now, "If the generals say it's OK to cut and run, it's OK to cut and run."

Without the generals on their side, the gas has gone out of the hawks' balloon. They gambled on their radical neoconservative vision that the Iraq war was essential -- and lost. More than 4,000 Americans are dead and 30,000 are wounded. Up to a million Iraqis have died and hundreds of thousands have been driven from their homes. And for what? For an Iraq that could still fall back into sectarian violence at any time? For an Iraq whose best hope is another Saddam-like strongman? For a region that despises the U.S. more than it ever has and is increasingly turning to radical Islam? For a nuclear-armed Pakistan in danger of becoming a failed state? For a resurgent Taliban in Afghanistan? For a greatly strengthened Iran? This is not victory, and no matter what happens in the future, it can never be victory from either an American or an Iraqi standpoint. The cost has simply been too high. A new CNN poll shows that an amazing 67 percent of Americans oppose the war.

There is, however, one development that raises legitimate fears that Obama could still backslide in Iraq. If he is moving responsibly to end the Iraq war, he is making alarming and wrongheaded moves in Afghanistan and Pakistan. By sending 17,000 troops to Afghanistan and continuing Bush's illegal policy of using drone Predators to assassinate suspected militants in Pakistan, he's raised significant doubts about whether he is prepared to reject Bush's entire failed war on terror. If he entangles America in another endless, unwinnable war in Afghanistan, Bush's misguided war on terror will live on, regardless of what happens in Iraq. In fact, if Obama gets bogged down in Afghanistan, it could also make it harder for him to leave Iraq: If you're endlessly fighting jihadis in one country, how can you justify not endlessly fighting them in another?

Obama is currently undertaking a top-to-bottom strategic review of U.S. policy in Afghanistan. If he decided to continue the war on terror approach there, he will throw the dying hawks a lifeline -- and condemn his Mideast policy to failure. Obama showed that he is a master of finding the middle ground in Iraq, but there is no middle ground on the war on terror: He must either embrace diplomacy and an intelligent ground-up approach to drying up jihadism, or continue Bush's doomed militarist approach -- this time in the country known as the graveyard of empires. The success of his foreign policy, and probably his presidency, hangs on his decision.