Can California gays make it legal?

Attorney Dennis Herrera explains why he's confident he can convince the Golden State to send Proposition 8, the ban on gay marriage, packing. 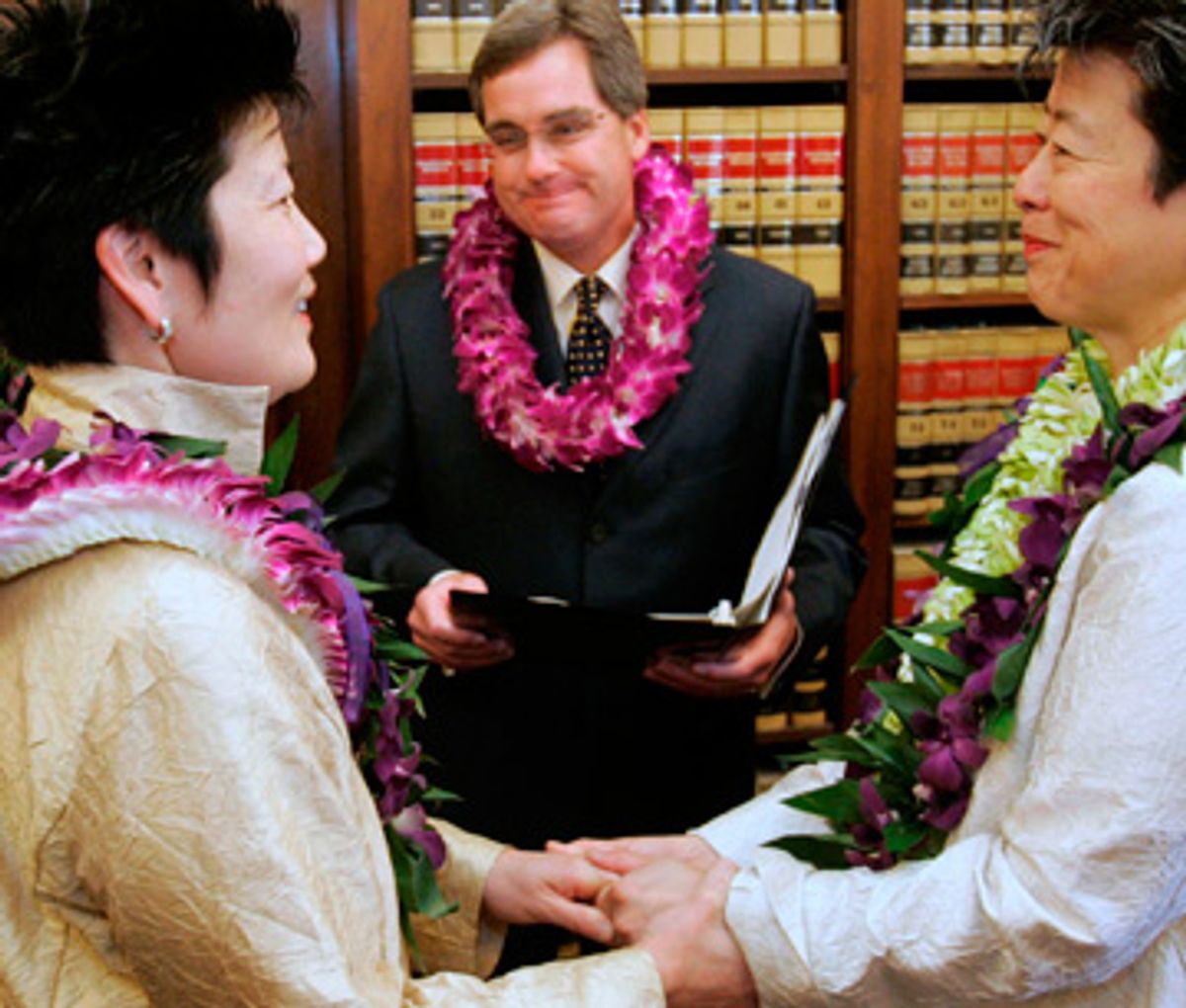 It's time to pop the big question: Will California marry gay couples? That's the proposal the state Supreme Court will consider on Thursday, when arguments begin against Proposition 8, the recently passed measure that outlawed same-sex marriage, just months after it was legalized.

No one's done more to spur the court to say "I do" than San Francisco City Attorney Dennis Herrera. The 46-year-old doesn't exactly have the "it" factor of the city's celebrity mayor, Gavin Newsom, who kicked off the city's wedding spree five years ago. But Herrera, with his blunt features and everyday mannerisms, is a bit like the wizard behind the curtain, pulling the legal levers to keep this political show going.

When San Francisco was ordered in 2004 to stop issuing marriage licenses to same-sex couples, Herrera immediately hit back with a historic lawsuit against the state. In the years since, he's led the charge of a legal battle that seemed to be won in May 2008 when the state Supreme Court decided to overturn the ban on gay marriage. But then Proposition 8 made it to the November ballot and passed with 52 percent of the vote. Herrera, among many others, brought a suit against the measure, arguing that it shouldn't have made it to the ballot in the first place.

He recently spoke with Salon in his stately office overlooking City Hall's front steps, which have hosted thousands of same-sex newlyweds, about the significance of this high-court decision.

What are the key arguments that will be made in the legal challenge to Proposition 8?

Well, for us, it's really quite simple. We're saying that the process for putting Prop. 8 on the ballot was fundamentally flawed; the proper procedure was not a constitutional "amendment" but a constitutional "revision." For the electorate to change the nature of the equal protections clause of the California Constitution, it would require a constitutional revision. That means that you need a two-thirds vote of the Legislature before you can even put it on the ballot -- that's not what happened in November. Prop. 8 was instead treated as a constitutional amendment and brought directly to the voters.

Prop. 8 also drastically altered the structure of state government; it stopped the courts from applying the equal protection clause of the California Constitution to a protected class of citizens, those being gay folks.

How is it even up for debate whether Proposition 8 should have required a constitutional revision, when the Supreme Court ruled in May that marriage is a fundamental right?

There isn't a heck of a lot of case law on what constitutes a revision versus an amendment in California. But, because there is a fundamental right at issue that involves a protected class of citizens, we're saying you can't make these changes through the amendment process.

What is the strongest argument Proposition 8 backers have against you?

There isn't a lot of jurisprudence in this area. What they have been saying all along is, "Oh, well, this goes against the will of the voters." That's a politically attractive argument, but it ignores that we have a representative democracy, not a direct democracy. The courts are empowered to make determinations about who's entitled to constitutional protections and, sometimes, they are called upon to ensure that the minority is free from the tyranny of the majority.

If the court doesn't strike down Proposition 8, should we worry that any minority right could be taken away by a simple majority of voters?

Yes, it's a distinct possibility. If the courts aren't allowed to be the arbiters of what equal protection under the law means, what do our constitutional guarantees mean? In that case, any politically disfavored group in the future -- women or other minority groups -- could have their rights taken away by an adroit and effective political campaign. I don't think that was what was envisioned when we created our constitution in California.

What would a loss in this case mean for the 18,000 couples who married during the four months gay marriage was legal in the state?

The court will most likely render an opinion on that. It's our position that there's no language in Prop. 8 that says it was retroactive, so those marriages are valid.

What did you think about the racially charged finger-pointing after the measure passed?

Obviously, I was disappointed that it passed and I know there has been finger-pointing at a variety of groups, but I like to look at how far we've come. Tremendous strides have been made both legally and politically, in terms of educating folks about the issue of marriage equality. That was reflected in the fact that the vote on Prop. 8 was so close.

Do you think the popularity of the film "Milk," and its recent Oscar wins, has changed public opinion about gay marriage?

Real-life examples educate people. The progress that's been made over this last decade has largely been thanks to introducing people to individuals that they know, in their family or their neighborhood, who are gay and just want the opportunity to be in a recognized relationship with the person that they love.

The legal back-and-forth over gay marriage has spanned five years now. Will it ever end?

With respect to this case, we've only made state law claims -- so, what the Supreme Court says here will be the definitive word. That’s not to speak to what happens in other jurisdictions across the country or any federal claims that are raised.

Some might say that, as a straight Catholic, you're a somewhat unlikely advocate for same-sex marriage. How is it that you've become such a dogged defender of gay rights?

Oh, I just think it comes down to my being a believer in equality. The extension of that is ensuring equality for a whole class of citizens that have been denied it for much too long. If you're a lawyer who believes in the rule of law and civil rights, I don't see how you can respond any other way.

I was probably involved in this issue before I even realized it. The year before we directly dealt with the issue of marriage equality, my office led the charge to extend the title of spouse to same sex couples with respect to property tax reassessments after the death of a domestic partner. That was the issue right there and we didn't even realize it at the time.

Has being an outsider to the gay community helped your mission?

It might be that seeing gay marriage defended by a straight married man led some straight people to look at the issue more closely. If that's true, I'm happy to have served that purpose.

Mayor Newsom was criticized for so radically tackling the issue the way he did in 2004. Could he have taken a better approach?

I'm not going to criticize his approach. It certainly got people focused on the issue and has been complementary to what I've done on the legal side; they were mutually reinforcing.

On that note, hours after San Francisco was forced to stop issuing marriage licenses, you filed a lawsuit against the state -- but your job certainly didn't require you to. Why did you decide to keep fighting this legal battle?

Because I knew that it was the only way we were going to get the issue dealt with. We had the lawsuit ready, because I knew the court wasn't going to get to the heart of the issue. We were already involved in it; if you go to battle, you better be prepared to take the fight to its logical conclusion.

Did you have any idea that the battle would go on for so long, though?

Did I think we'd be sitting here five years later? Probably not. But the wheels of justice sometimes grind slowly.

Can you predict an outcome in this case?

I never do that. But I'm confident that we have a very strong argument. When you look at the concept of constitutional protections and what the courts have traditionally been empowered to do, I don't see how you can come up with any other decision than in our favor.

What's your next move if the court doesn't strike down Proposition 8?

I don't know at this point. We'll review our options, consult with our partners who have been involved in this legal battle alongside us for the past five years, and then we'll make the decision that we have to make. But I'm confident that justice is on our side and that we'll have this dealt with once and for all.