Once, even Republican presidents like Eisenhower and Nixon believed in the public sector. Now, during a national crisis, a Democrat opts for inadequate, neoliberal, private-sector remedies. What happened? 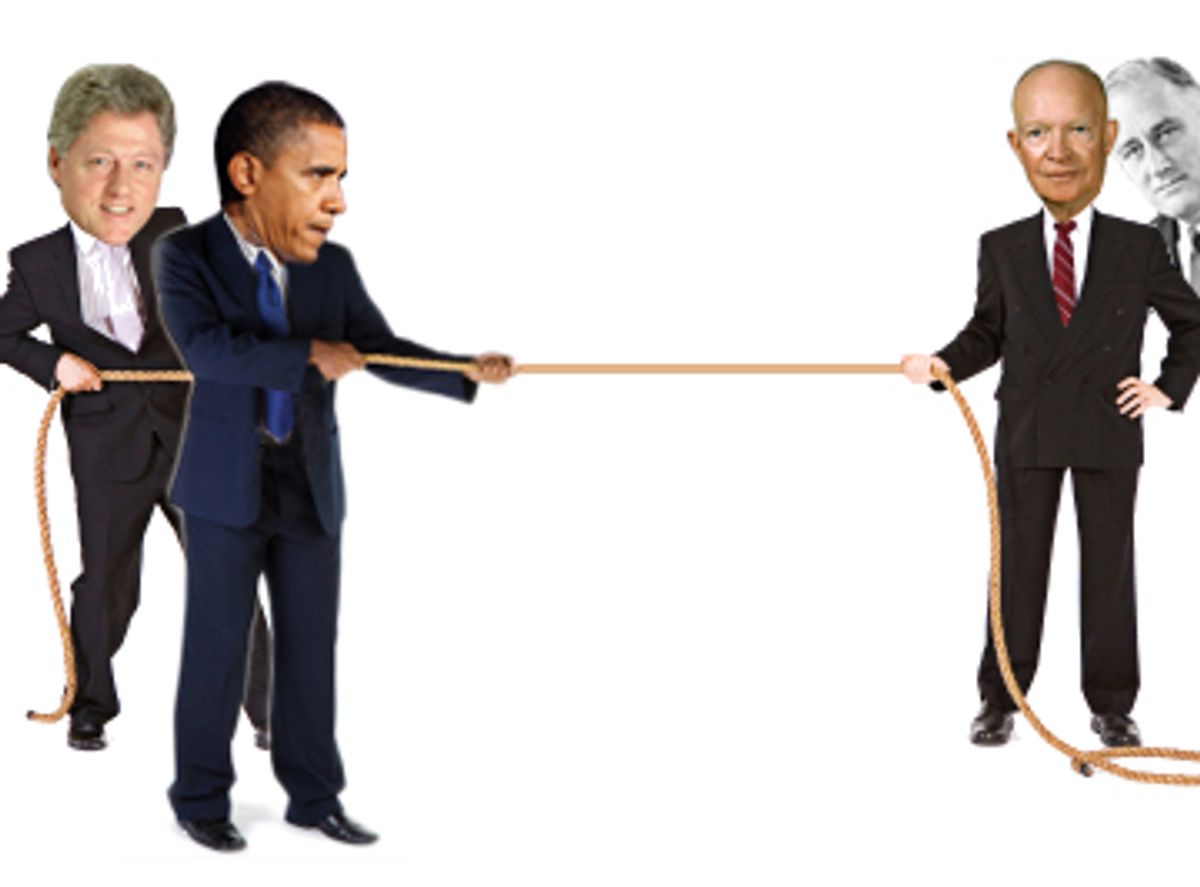 Barack Obama's bold, ambitious budget plan proves that he is the true heir of Franklin Roosevelt and the New Deal. Consider Obama's Rooseveltian energy plan. In 1939, President Roosevelt decided to mobilize Americans to create a new source of energy: atomic power. Although he was urged to focus on government-funded R&D, FDR chose a different route. He wisely encouraged private capital to invest in atomic energy research by a variety of tax incentives. To make atomic power investment more palatable to private capital, FDR boldly chose to make all other forms of energy in the U.S. uneconomical, by slapping high taxes on kerosene and coal. With the money from the new federal Kerosene Cap and Trade system, President Roosevelt and Congress funded a small-scale federal research program, in the hope of attracting much greater private investment ...

Wait. What's that you say? FDR didn't do that? He poured federal money into the all-public Manhattan Project and created the first atomic bomb in a couple of years? He didn't tax kerosene to make it uneconomical and to encourage private investment in atomic power?

All right, then, forget FDR. He was a socialist, anyway. Let Dwight Eisenhower serve as a model for the Obama administration. President Eisenhower authorized the biggest infrastructure program in American history, when he signed the National Interstate and Defense Highways Act of 1956. The interstate highway act created an elaborate system of private tax incentives and public-private partnerships (PPPs) to encourage private corporations to build national highways. To begin with, all U.S. highways were leased to domestic and foreign corporations for a period of decades. Second, all U.S. highways were set up with toll booths, so that American drivers would be forced to repay the corporate owners of the national highways every few dozen miles. Finally, a system of high-speed lanes with higher tolls was created, so that the rich could whiz down the road while middle-class and poor Americans were stuck in traffic jams ...

Free highways without toll booths, owned by the public, paid for out of taxes? My God. So the John Birch Society was right after all. Dwight Eisenhower was as much of a socialist as Franklin Delano Roosevelt!

The point of this imaginary monologue is simple. Once upon a time in the United States, public goods -- from retirement security and energy research to public roads -- were provided by the government and paid for by taxes. As late as the Nixon administration, the provision of public goods by government was considered perfectly compatible with a robust market economy by so-called Modern Republicans like Eisenhower and Nixon as well as New Deal Democrats like Roosevelt, Truman, Kennedy and Johnson. In the intervening 40 years, however, free-market fundamentalists of the Chicago School have managed to change the debate, redefining "socialism" to mean not only public ownership of the means of production, but also public provision of public goods.

Rather than fight back, most Democrats in the last generation adapted to this hostile conservative political climate by jettisoning New Deal "big government" liberalism for "market-friendly" neoliberalism. Neoliberals shared the right's enthusiasm for deregulating industries that New Deal Democrats had regulated in the public interest. Jimmy Carter and Ted Kennedy supported the deregulation of trucking and airlines, while Bill Clinton presided over the dismantling of the New Deal era's banking regulations and declared: "The era of big government is over." Neoliberals and conservatives agreed that public goods should be provided by private, for-profit or nonprofit entities, rather than government agencies. If private corporations or universities had no motivation to provide public goods, well, then, they would be bribed with tax credits or other government subsidies.

Neoliberals are liberals in one sense -- they fret about unequal outcomes. But rather than help middle- and low-income Americans by regulating the prices of privately provided public goods, as the crude and direct New Dealers would have done, neoliberal Democrats have argued for allowing the "market" (translation: the publicly subsidized entities) to set prices and then promised to provide tax subsidies or grants to help middle- and low-income Americans pay for the expensive, privately provided public goods.

You might have thought that the Crash of 2008 would have led Democrats to reconsider this neoliberal approach to providing public goods by private means. But to judge from President Obama's budget, the White House is still living back in the neoliberal era, when the diminutive Milton Friedman cast a giant shadow.

Consider Obama's education proposals. The problem with higher education is that it costs way too much. Tuition costs at private universities and some state universities have been growing far more rapidly than inflation. A crude, old-fashioned, old-thinking New Deal liberal would see the problem as one of excessive prices demanded by universities, not insufficient funds on the part of the students whom the universities gouge. The hypothetical New Deal liberal would threaten to deny universities their privileged tax-exempt status unless they spend more of their endowments on tuition and keep their prices affordable.

The neoliberal alternative is to avoid impolite and divisive inquiries into the reasons for skyrocketing tuition costs. That would entail the government concluding that prices in a particular industry (in this case, a nonprofit industry) are too high, something that government should not do. Instead, the taxpayer will be forced to cough up money to help students meet the exorbitant fees. Thus Obama's first budget calls for maintaining the $2,500 New American Opportunity Tax Credit for middle-class students, while converting Pell Grants up to $5,550 into a permanent government entitlement. If I were a university, I'd raise my tuition by ... oh ... let's say $5,550 a year. Government subsidies without government price controls would encourage cost inflation, one might think, but this possibility appears not to bother the brilliant economists on Obama's team.

Then there's energy. The problem with alternative energy sources like solar power and wind power is that they are still too expensive, compared to coal, natural gas and nuclear energy. The answer, according to a minority of enviromentalists like Ted Nordhaus and Michael Shellenberger, should be massive, Manhattan-style public sector R&D to discover ways to bring alternative energy prices down -- in absolute, not just relative, terms, to maintain cheap electricity for American industry and American households. That would be the Roosevelt approach. But the Obama approach is to use a cap-and-trade system to artificially raise the prices of conventional energy, in the hope that private capital (with modest help from public capital) will pay for efforts to invent a cheaper solar cell or wind turbine. The fact that most of the left embraces cap-and-trade should not blind us to the fact that cap-and-trade is a classic example of an indirect, overly complicated, "market-friendly" neoliberal approach, touted originally by conservatives and neoliberals as an alternative to the allegedly discredited "top-down, command-and-control" approach that gave us, among other things, the TVA, the Manhattan Project and the Internet.

And healthcare? The Obama administration deserves credit for trying to reduce prescription drug costs and to promote electronic medical records. Obama's budget director Peter Orszag in particular deserves praise for pointing out that escalating economy-wide healthcare costs, not the Social Security and Medicare costs associated with the aging of the boomer generation as such, represent the real long-term threat to the U.S. economy. Even so, it seems likely that whatever ultimately emerges as the consensus Democratic healthcare plan will be yet another Rube Goldberg scheme for massively subsidizing employers, private health insurers, or both.

I'm sympathetic to the argument that the public, after nearly half a century of conservative anti-government propaganda, will oppose the direct provision of public goods paid for out of straightforward taxation -- the "socialistic" old Eisenhower-Roosevelt approach. It was the conviction that a single-payer healthcare system was politically impossible that led me to endorse the individual mandate system as the next best alternative, in "The Radical Center," a book I co-authored with Ted Halstead in 2001.

But a lot has changed since Wall Street imploded last fall. The great investment banks are gone, the U.S. has nationalized much of the financial system, and appears to be on the way to effectively nationalizing the automobile and housing sectors as well. In this environment, we need to consider some heresies, like the idea that the best way to provide a public good is not necessarily to pour subsidies on middlemen, and then bail them out with more subsidies when they fail at their public function.

The fundamental barrier today is the way that the issues are framed, by Democrats and Republicans alike. Thus the problem is defined not as making credit available for individuals and businesses, but as saving the banks and the shadow banking system. The goal is not to provide healthcare to all citizens, but to enable all citizens to purchase private health insurance. The objective is not to ensure universal access to higher education; it is to insure universal access to colleges and universities. In these and other cases, the means is confused with the end. The ultimate goal -- providing credit, healthcare or education -- is identified with the interests of non-governmental for-profit or nonprofit providers of that service. If these private institutions fail to provide the public service in a low-cost, effective and equitable way, then they must be subsidized even more. The idea of achieving the same public goals through simpler, more direct and efficient means that would cut out the middleman appears to be heresy to the Obama administration.

It's not necessary to nudge the Obama administration leftward until it arrives at socialism. When it comes to the public provision of public goods, Eisenhower Republicanism would be just fine.