Could the most anticipated comic-book movie of the season turn out to be the most unsettling superhero spectacle ever made? 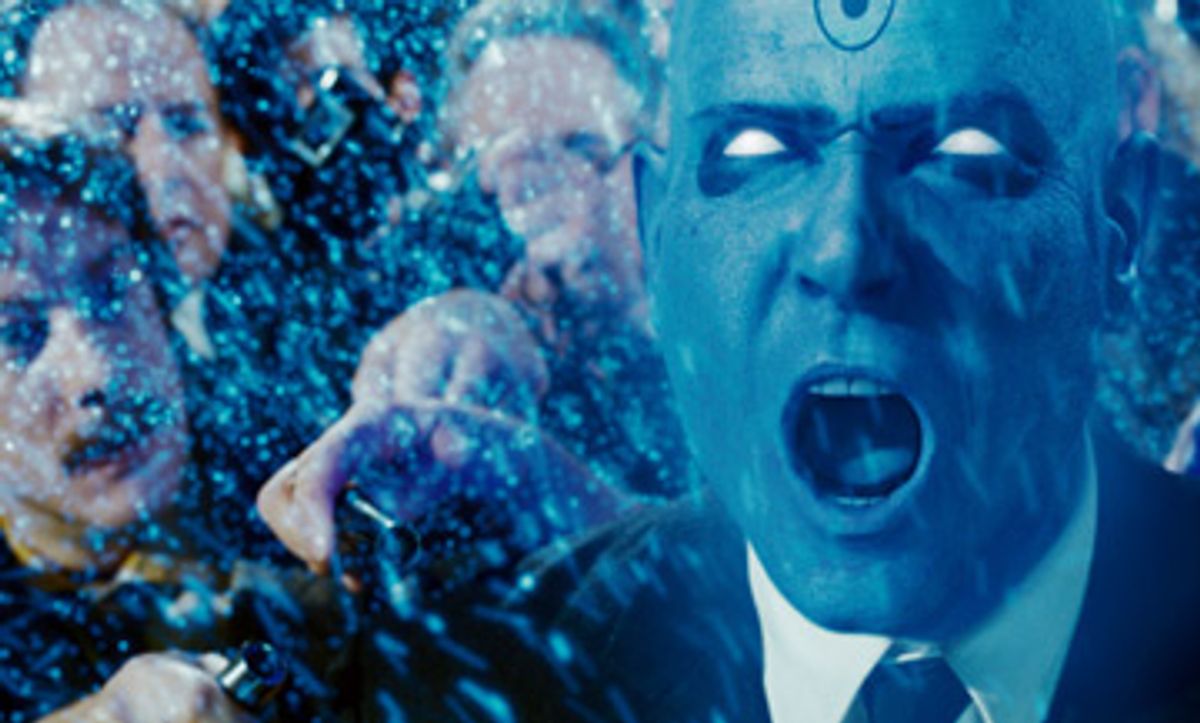 I went into the screening of "Watchmen" all set to write one of those high-minded critical screeds about how Hollywood always screws up comic-book movies, and how the better the comic book is, the worse the cinematic results are. Successful comic-based flicks seem to come in only two flavors, both of them fundamentally adolescent: the binary, good-vs.-evil, teen-romance world of the "Spider-Man" movies or the stylized neo-noir darkness of Christopher Nolan's Batman films. Last year I joked that it would be great to see a superhero movie that was actually set in a grimy, realistic, morally bewildering universe, instead of an art-directed simulacrum thereof. What if Batman was in "The French Connection"?

Last year, I hadn't seen "Watchmen." I'm shocked to be writing this, given the number of screenwriters, directors and studios this adaptation of Alan Moore and Dave Gibbons' ground-breaking 1986 anti-superhero comic series has gone through, but "Watchmen" is absolutely devastating. Dense, intense, tragic and visionary, this is the kind of movie that keeps setting off bombs in your brain hours after you've seen it. After coming out of the theater, I wandered the frozen streets of Manhattan watching passersby and wondering which was the real city, the apparently peaceful one I inhabit now or the one that faces Armageddon at the mid-'80s height of the Cold War in the Moore-Gibbons universe. If I could have gone back inside and watched the movie all over again, I'd have done it.

Although he was easily the least promising of the directors attached to this project over the years -- which have included Terry Gilliam, Paul Greengrass and Darren Aronofsky -- Zack Snyder (of "300" and the 2004 "Dawn of the Dead" remake) reveals himself here as a filmmaker of mightily impressive range and control. For my money, "Watchmen" way out-darks "The Dark Knight," and immediately leaps near the top of the list of apocalyptic pop-culture operas, alongside "Blade Runner" and the first "Matrix" movie (which are obvious influences). My instinct is that this may be too gloomy, grinding and un-cathartic a film to provide a Bat-scale global payday, and to his immense credit, Snyder has insisted he won't be involved with any sequel.

A sequel may well be made, of course, but I don't see how you do it and avoid pointlessness and self-parody. "Watchmen" is not the story of the triumphant reunion of a band of superheroes, after all, but of its final implosion and self-destruction. Not all the Watchmen survive the film, and the world may have reason to be grateful for that. (I'm on dangerous turf here, I realize.) One of the film's central characters, a man called Rorschach (Jackie Earle Haley) is a rage-filled, right-wing sociopath, something like Travis Bickle in a mottled mask and a trenchcoat. Another Watchman, known as the Comedian (Jeffrey Dean Morgan), is a rapist and remorseless killer who specializes in knocking off Latin American leftist regimes for the CIA. Adrian Veidt (Matthew Goode), the onetime Ozymandias, is an unctuous energy zillionaire with faintly troubling utopian visions who styles himself after Ramses II, the all-conquering Egyptian pharaoh.

More powerful still is the trans-dimensional Nietzschean superman called Dr. Manhattan (voiced by Billy Crudup), a nude figure of variable size who resembles a blue, translucent version of the Oscar statuette. He's being used by the United States government as a one-man missile defense system, while President Richard Nixon (who's beginning his fifth term in 1985) edges ever closer to launching a preemptive nuclear strike against the Soviet Union. But in that context, Dr. Manhattan's cosmic consciousness is none too comforting. As he puts it, life itself is an abstract and perhaps meaningless concept, and he can discern no molecular difference between living bodies and dead ones.

OK, there are people to root for, more or less, against the impending A-bomb clouds and Snyder's dizzying, thrilling montage sequences, one of which outlines the hilariously tawdry tradition of masked crime-fighting vigilantes, and another of which offers an alternate version of recent American history. The Comedian killed JFK, it appears, and followed that up a decade later by taking out Bob Woodward and Carl Bernstein. The Viet Cong surrendered to Dr. Manhattan in person, and Vietnam is now the 51st state. Among the film's cameo characters are Pat Buchanan, Ted Koppel, Lee Iacocca, Andy Warhol, Henry Kissinger and Nixon himself, played by Robert Wisden as a jowly tyrant who still possesses, buried deep inside, a gram or two of humanity.

But even the heroes of "Watchmen" are muddled people, more than a little frustrated and disappointed in themselves. Dan Dreiberg (Patrick Wilson) used to be Rorschach's partner, a sub-Batman crime-fighter called Nite Owl. Involuntarily retired, along with all other superheroes, by a 1977 act of Congress, Dan's now a rumpled, middle-aged nebbish who lives alone. He's still haunted by his unconsummated passion for Laurie Jupiter (Malin Akerman), aka Silk Spectre, who is Dr. Manhattan's lover and pretty much his only remaining tie to the human race. If there's any conventional redemption to be found in "Watchmen," it lies in Dan and Laurie rediscovering themselves and each other.

As readers of the Moore-Gibbons "Watchmen" will recognize, that's also true in the comic book. Indeed, whatever liberties Snyder and his screenwriters may have taken, the film remains strikingly loyal to the governing spirit of Moore's graphic novel and incorporates large dollops of its scene-by-scene dialogue. Most impressively, Snyder has translated into film the aspects of Moore's work that are most difficult to explain or to capture: its combination of epic grandiosity and Scorsesean dirty realism, along with what you might call its atheism. Inescapably, the context for "Watchmen" is different 22 years after its initial publication -- in 1986, the world really did face nuclear catastrophe, or so it seemed -- but the story retains much of its startling, stringent potency as the first (and nearly only) superhero comic to turn its back on the genre's ahistorical and quasi-fascistic Great Man idolatry.

As those who have followed this film's long gestation know, Snyder has blended two different screenplays, one from the early '90s by David Hayter and a more recent version by Alex Tse. And yes, as you have probably heard, Moore's ending has been adjusted, or streamlined, or whatever Hollywood euphemism you prefer. I'm going to write something very brief about that ending in just a second, in a way that really ought not to spoil it for most viewers. Moore fans will know about this already, and it won't mean anything to those who haven't read the comic books. But I'm still going to give you another sentence or two to close your computer in a cold sweat, or click over to War Room or Cary Tennis or something.

OK, are you ready? You sure? Last chance! Here goes: There's no giant squid. To the long list of movies that don't have a giant squid in them -- "Mars Needs Women," "Nashville" and Kieslowski's "Decalogue" all come to mind -- you can add this one. But listen, I'm not going to tell you what Snyder and the writers have put in there instead of a giant squid. I won't drop coy hints or anything. I'll just add one completely heretical observation: It works better this way. The squid was kind of dumb. You may also know that Moore's name appears nowhere in the credits for Snyder's "Watchmen," and that he's vowed to give all his royalties to Gibbons (who is credited as "co-creator" of the DC Comics title). Moore is of course correct that every other movie version of his work has been total bollocks, and it's somehow fitting that the one he completely disavows is the one that gets it right.

I've made it clear by this point that I think "Watchmen" is a terrific comic-book movie, the most completely satisfying and unsettling one I've ever seen. I also feel pretty sure that its reviews will be all over the map, and that at least some viewers will be profoundly turned off by the bitterness and bleakness of this movie's vision. You'll notice I haven't done that movie-critic thing of pulling the actors into the spotlight one by one, discussing their signature moments, the set of their jawlines, the breathtaking humanity of their emotions. Well, I'm with Dr. Manhattan on this one. Who cares about humanity?

No, actually I think some of the performances in "Watchmen" are excellent, notably Haley as Rorschach and Morgan as the Comedian, the two thoroughly reprehensible superheroes who are nonetheless devoted to living and dying by their code. But this is a grandiose, director-driven spectacle, a visual and auditory construction after the fashion of Stanley Kubrick, and nominally central characters like Dan and Laurie, while engaging enough, are undeniably overshadowed. I could engage in some kind of debate with the shadow of Pauline Kael right here -- topic: What are movies, and what is their purpose? -- but let's sum it all up by admitting that "Watchmen" is an ingenious, bloody-minded and sometimes coldhearted contraption, and how you feel about that is an individual matter.

That said, I think Snyder and his writers channel moments of the humanity and humor that's always present in Moore's work. When Laurie/Silk Spectre finally leaves Dr. Manhattan and ends up on Dan/Nite Owl's sofa -- in point of fact, straddling Dan on Dan's sofa -- and the object of years of lust and adoration from afar is finally within the one-time Nite Owl's reach, he suffers a fate familiar to many men but admitted by few. He can't get it up. She tells him it's all right and of course it's not really. Somehow I don't think that ever happens to the Man of Steel.