Some kind of bank nationalization is probably inevitable. The Democrats don't want to admit it yet. The Republicans just want you to be scared. 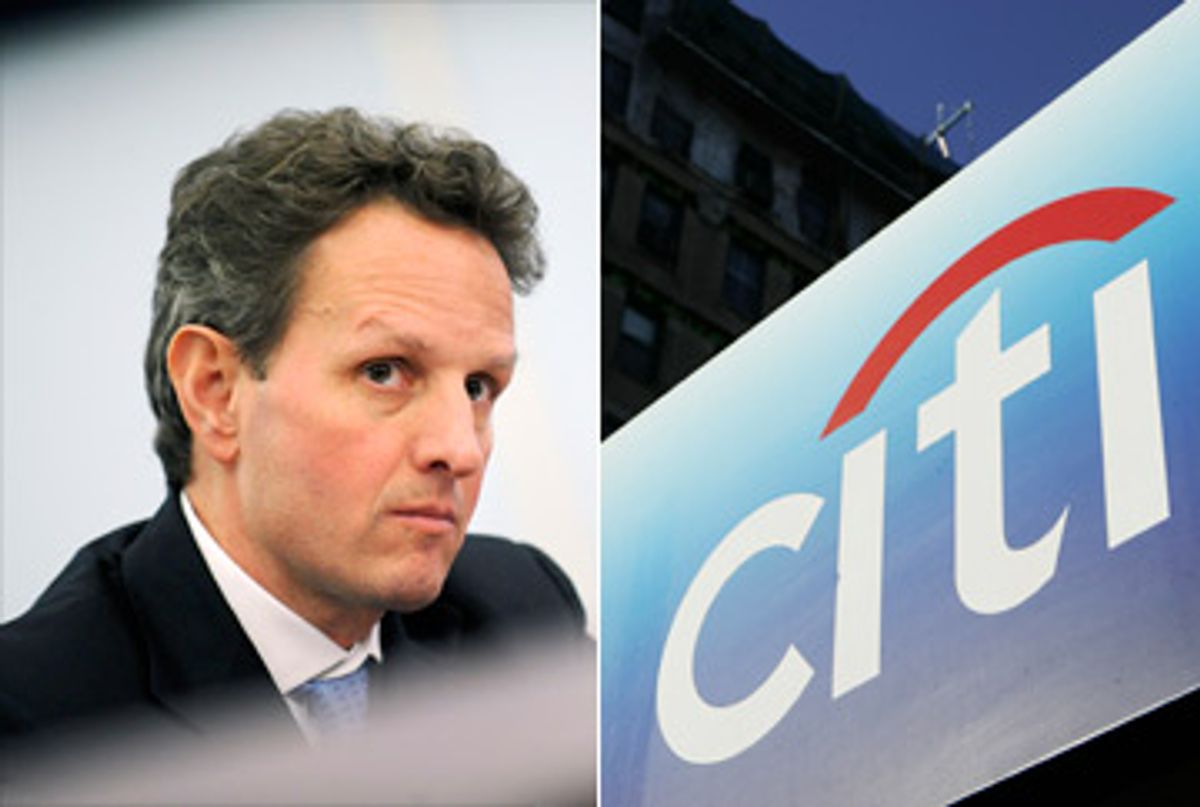 Until the U.S. economy fell to pieces last fall, the phrase "nationalize the banks" usually conjured up, in the popular imagination, scenes of the early days of a revolution in some far-off land (if it conjured up anything at all). Government takeovers of entire financial systems were something newspapers buried deep inside the foreign news section for the truly diligent readers, complete with sad little photos of mobs gathering outside banks to get their last withdrawals.

Which is why you may feel a little disoriented if you've turned on a TV or flipped through conservative opinion columns lately. All of a sudden, nationalization seems to have come home. These days, a federal takeover of the banking system is practically the only thing Republicans want to talk about. If South Carolina Sen. Jim DeMint isn't declaring that even temporary nationalization of banks is "the same idea as socialization," then his colleague from the same state, John McCain sidekick Lindsey Graham, is telling NBC's "Meet the Press" that Obama needs to consider the idea. Even Alan Greenspan is part of the conversation. The Ayn Rand disciple whose every public utterance for most of his life has been devoted to extolling the virtues of the free market is suddenly pushing nationalization.

Of course, even though the federal government now owns 36 percent of Citigroup, and Citigroup and other massive banks are teetering on the edge of insolvency, the Obama administration swears there's no plan for a government takeover. "This is a very complex set of problems, and bad decisions can result in huge taxpayer expenditures and poor results," President Obama told the New York Times on Friday, bringing up -- and then shooting down -- the idea that bank nationalization would save the financial sector. Treasury Secretary Tim Geithner told PBS's Jim Lehrer last week that nationalization is "the wrong strategy."

Yes, some liberal commentators, like Paul Krugman, are pushing the administration to take more control of big banks as a way of clearing bad home loans and related financial detritus out of the system. But much of the conservative chatter seems aimed at freaking people out about creeping socialism, rather than solving the banking crisis. As one Democratic aide on Capitol Hill put it, "The only people talking about nationalization are Republicans -- this is crazy to me, that they have traded their entire ideology within six weeks." Another aide likened the GOP buzz about bank nationalization to the "Joe the Plumber" phase of McCain's campaign -- talking about a federal takeover of banks is like screaming that Obama wanted to "spread the wealth" around. And, as if on cue, conservative firebrand Michelle Malkin called Obama a socialist on Monday, referring back to the McCain campaign's old language about "Barack the Redistributor."

Chances are, of course, that some of the country's biggest banks will fail the "stress tests" the Treasury Department plans to administer soon -- and will effectively prove insolvent, forcing the issue. (Geithner was set to meet with House Democrats Monday night to explain the tests.) The problem with the GOP talking points is that the scenario DeMint sketched out -- government bureaucrats running banks, deciding who gets loans and who doesn't -- isn't what anyone is contemplating. Instead, any nationalization is likely to be brief, narrow and aimed at saving any assets worth saving from banks that would otherwise go under. (Which isn't that different from what the U.S. already does with failed banks.) But to Republicans, the details seem beside the point. "Nationalization" is just another way to make voters fear Obama's stewardship of the economy.

Whether that scare strategy works politically is hard to gauge. But what Republicans apparently believe will work economically would probably frighten even more people. Instead of nationalizing banks, they want to let them fail. "I think that [the Obama administration has] got to close some big banks. They don't want to do it," Sen. Richard Shelby, R-Ala., the highest-ranking Republican on the Senate Banking Committee, told ABC's "This Week With George Stephanopoulos" on Sunday. "I don't want to nationalize them. I think we need to close them." If the debate comes down to simply watching banks go under or letting the government sell off any valuable assets they've still got on the books, nationalization may not seem like such a bad idea.

For now, pollsters say the public isn't paying enough attention to the debate over the financial system to have strong feelings about any one proposal or another. "People are more concerned about losing their jobs, losing their house, the change of living standards that they're facing," said Democratic pollster Harrison Hickman. "From a consumer point of view, I don't think it matters, and they're way too caught up in their own situation to be fixated on those sort of mega-questions." As for calling Obama a socialist, that may not be working, either. " If you did a poll and asked people, 'Here are terms, and see if you think they are an accurate description of Barack Obama,' I bet there are 10 times as many people who say 'Muslim' as say 'socialist,'" Hickman said. "It's sort of like calling somebody a carpetbagger, a scalawag -- it's sort of a word that is devoid of meaning for most people, especially anybody who actually voted for Obama."

What people are most irritated about is the money the banks have already gotten from the government, not what might happen to them under government control. A Newsweek poll last week found 56 percent of voters would rather have the government take over failing banks than just hand over more tax dollars, and 62 percent think the government has already done too much to help banks. The hostility most voters have to helping the banks could make it hard to do anything more no matter how it's spun. Democrats and Republicans alike say there's no way Congress will give the White House more cash to bail out banks without some sign that the $700 billion already authorized has done some good. And as anyone tracking the stock market knows, finding some good news in the financial system these days might be even harder to do than leading a government takeover of all the nation's banks.