Our political class, oblivious to how the world perceives us, still thinks the U.S. can credibly sermonize to the world.

The Washington Post's Fred Hiatt today condemns the Obama administration generally and Hillary Clinton specifically for "continu[ing] to devalue and undermine the U.S. diplomatic tradition of human rights advocacy."  Hiatt is angry that on her trips to China, Egypt and Turkey, Clinton failed to issue sufficiently stern and condemning lectures about those countries' human rights abuses.  The depths of the fantasy world in which our political elite reside -- and their complete lack of self-awareness -- borders on pathological.

While it's true that there is something ugly about hearing Clinton proudly announce that "I really consider President and Mrs. Mubarak to be friends of my family" -- that wonderful "friend of her family" is one of the world's most repressive dictators -- the idea that the U.S. is in any position to play the role of human rights arbiter for the world is about the most unhinged notion imaginable.  Few things have degraded international conceptions of human rights more than American actions over the last decade -- not only what we've done, but what we continue to do.  As Billmon once wrote, the U.S., under the Bush administration, has "forfeited forever its ability to chastise the human rights abuses of others without triggering a global laughing fit."

And that's to say nothing of our desperate dependency on, as opposed to leverage over, countries such as China.  Yet Hiatt -- who cheered on many of the abuses and continues to do so -- actually fancies America as the country that goes around the world credibly wagging its finger at other nations for their human rights inadequacies.

We didn't magically regain our moral credibility because we elected a new President.  While some Obama supporters uncritically quote official administration documents and statements from Robert Gibbs in order to proclaim: "All hail the U.S. Constitution. It seems to be coming back to life through some vigorous resuscitation," the reality is quite different.   Despite some very preliminary positive actions, there are many, many steps needed before that celebration is remotely warranted, and there are many actions that have been taken in the last month alone that are squarely at odds with that gushing praise.

Consider a new Report from the U.N. Special Rapporteur (.pdf), submitted to the U.N. Human Rights Council.  The Report documents the key events that led to the degradation of human rights conventions around the world over the last decade, with the U.S. as one of the leading catalyzers.  The Report identifies the American programs of rendition and lawless detentions as ones which corrupted huge swaths of the international human rights order because they entailed the active complicity of so many other countries -- including Canada and Britain -- in our systematic torture regime (click images to enlarge them): 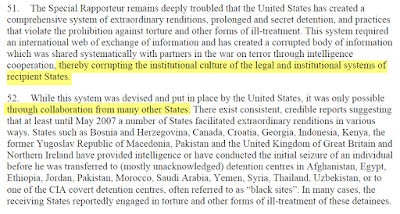 Critically, the Report singles out what is now clearly an Obama administration policy -- namely, the invocation of secrecy claims to prevent investigations of these crimes and accountability for their victims -- as a key ingredient in the ongoing destruction of the international human rights regime:

This is just a fact:  the U.N. Human Rights Report is identifying as a gross violation of human rights and international obligations exactly that which the Obama administration is doing:  namely, invoking claims of "State Secrets" in order to "conceal illegal acts from oversight bodies or judicial authorities" and to deny victims of torture and secret detention a judicial forum in which to seek remedies.  We're not only doing that in our own courts, but also conspiring with and/or pressuring our allies to invoke claims of secrecy to conceal these crimes and prevent accountability.   And that's to say nothing of the emphatic position we are still taking that we can abduct citizens from around the world, ship them off to a black hole at Bagram, and deny them any rights of any kind to challenge their detention.

Moreover, citing the Convention Against Torture -- the treaty which Ronald Reagan signed in 1988 and the U.S. Senate ratified in 1994 but which must not be mentioned in decent company these days -- the U.N. Report also reminds the United States:

I'm well-aware that there is hardly anything more ridiculous in American political discourse than the belief that it somehow matters what the U.N. has to say about American human rights practices, obligations and violations (as opposed to what it says about those of lesser countries), and it's even sillier still to argue (or at least to genuinely believe) that the U.S. should abide by its treaty obligations.  That's the most Unserious thing one can argue, because it posits that the U.S. should abide by the standards to which the rest of the world is subjected, a premise that is directly at odds with the central dogma in the American religion:  our own exceptionalism.  Thus, the fact that our international treaty obligations compel criminal investigations for torture and bar the legalization of that behavior and retroactive immunity for the lawbreakers is almost never even mentioned, let alone honored, when we collectively insist that even extreme war crimes committed by our leaders must be concealed, protected and then erased from history.

Still, just fathom the level of delusion, of pure reality-detachment, necessary to argue that -- even as the U.N. officially identifies ongoing American behavior as a central cause of the degradation of international human rights conventions -- American officials should travel around the world issuing righteous condemnations of other government's human rights violations.  It's a by-product of the self-protective refusal on the part of political elites to come to terms with just how broken and extremist we've been and, in many cases, continue to be as a country.  Who besides blind tribalists like Fred Hiatt could possibly believe -- as we actively conceal our own war crimes, immunize the lawbreakers in the name of Secrecy, and refuse to comply with our treaty obligation to investigate -- that our human rights lectures to the world are going to be taken even the slightest bit seriously?

UPDATE:  The country that did this and now seeks to cover it up and protect the perpetrators is the same one that Fred Hiatt thinks should travel the world, arrogating unto itself the right to sit in judgment of others, and decree whose human rights behavior is inadequate.  To describe the mindset is to demonstrate how warped it is.

UPDATE II:  In its 2008 Report on Human Rights, this is what the U.S. State Department said while condemning Egypt:

Article 42 of the constitution prohibits the infliction of "physical or moral harm" upon persons who have been arrested or detained; however, the law fails to account for mental or psychological abuse, abuse against persons who have not been formally accused, or abuse occurring for reasons other than securing a confession. Police, security personnel, and prison guards routinely tortured and abused prisoners and detainees, especially in cases of detentions under the Emergency Law, which authorizes incommunicado detention for prolonged periods. The government rarely held security officials accountable, and officials often operated with impunity.

Egypt tortures prisoners, subjects them to mental and psychological abuse, detains them incommunicado for long periods, and then -- to top it all off -- doesn't even investigate or prosecute those who do that, but instead allows them to "operate with impunity."  What kind of monsters could do something like that?  Thankfully, our State Department is vigilantly documenting and condemning this behavior, though -- as Fred Hiatt righteously asks -- why aren't we, the United States, doing more to bring this wretched and lawless behavior from Egypt to light?

The State Department Report went on to note:

Although the [Egyptian] government investigated torture complaints in some criminal cases and punished some offending police officers, punishments generally did not conform to the seriousness of the offenses.

Permit me to repeat that this Report -- complaining that Egypt's criminal punishments for its torturers did not go far enough -- was issued by the State Department of the United States.  This is what else we are bitterly protesting in Egypt:

The constitution prohibits arbitrary arrest and detention; however, during the year, police and security forces engaged in such practices, including large-scale detentions of hundreds of individuals without charge under the Emergency Law, which was extended on April 26 for two more years.

Egypt detained people -- hundreds of them -- without charges, in violation of their own Constitution!  The year before, we formally condemned Vladimir Putin's government for eavesdropping on Rusisan citizens without warrants even though Russian law requires warrants, and then -- more tyrannically still -- "there were no reports of government action against officials who violated these safeguards."  The sheer lawlessness that exists in the rest of the world is so very upsetting.