The end of Levi and Bristol?

A round table on the Star magazine report that the engaged teen parents are no longer dating. 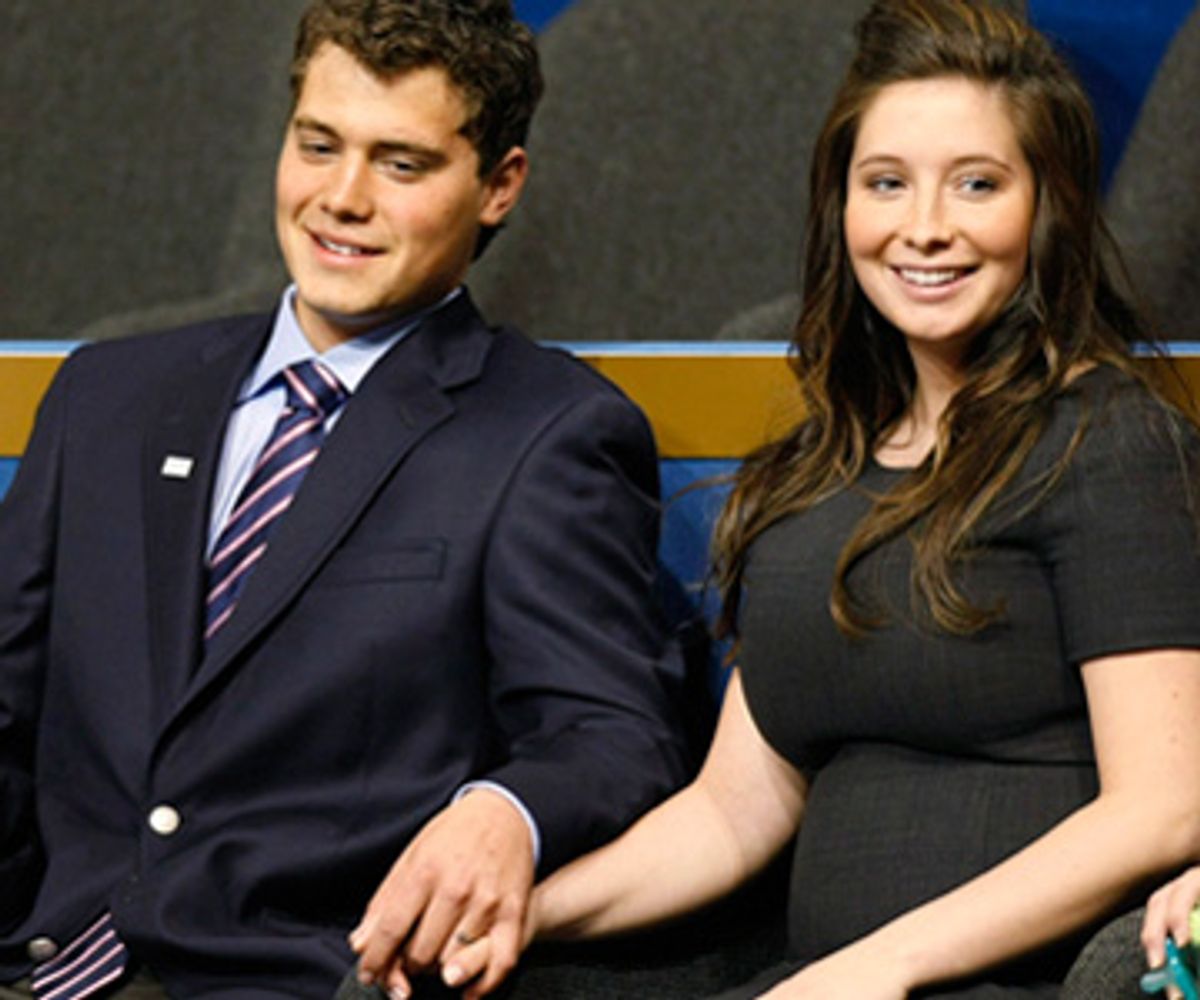 For me, it remains one of the most indelible images of the Republican convention: Fresh-faced, pregnant teen Bristol Palin sitting beside her ice-hockey hunk Levi Johnston, the "fuckin' redneck" all shorn and showered, shifting in his chair as if still expecting to wake from the dream, a fresh tattoo around his ring finger that read "Bristol." These were the faces that launched a thousand shit fits -- from debates about abstinence-only education to just what it means to have "family values."

But according to a story in Star magazine, the engaged teenagers, now 18 and 19, have split. The source is Levi's sister Mercede, who tells the magazine that the parents of 2-month-old Tripp have been broken up for more than a month and then goes on to spew all sorts of bile about Bristol:

"Levi tries to visit Tripp every single day, but Bristol makes it nearly impossible. She tells him he can't take the baby to our house because she doesn't want him around 'white trash'!"

(Regardless of the truth, I have to wonder: Why is Mercede talking to the tabloids? Also: What happened to the "s" in her name?)

Just a few weeks ago, in an appearance with Fox's Greta Van Susteren, Bristol put on the shine about Levi's fatherhood skills but went on to offer a rather poignant portrait of the inevitable difficulties of teen motherhood: "I think everyone should just wait 10 years," she said, more than once, and I couldn't be the only one whose heart felt a stab when she said it.

As for what to make of the announcement? Well, I don't know if those two loved each other any more than I know what brand of underwear you're wearing. But I do know that shoehorning two young people into marriage for the sake of propriety is unbelievably damaging, and so if they escaped that fate, all the better.

I asked our Broadsheet contributors to offer their insights on the report.

Tracy Clark-Flory: Parents, this is a teachable moment: Engagement tattoo rings are never a good idea.

Vincent Rossmeier: I for one, have lost my faith in love. I'm thinking about calling off my wedding.

Kate Harding: I've been expecting this ever since we made it through October without a media-distracting wedding, in fact. If they had actually wanted to get married, I just can't imagine the campaign would have let that opportunity pass. (I'm a little surprised they did anyway.) So I'm happy neither one of them has to add "being married to the wrong person" to the long list of difficulties associated with being very young parents in the public eye.

Mary Elizabeth Williams: As someone whose parents were very young, conceived me by accident and broke up while I was still in utero, I believe sometimes the best thing you can do for your kids is be brave enough to know when to quit. I can't speak for any other family's circumstances, but I do know that I never spent a day of my childhood in a home where the people in it didn't love each other. And I wish to God we as a culture would get over our sanctification of staying together for the kids.

Rebecca Traister: My basic reaction is that I hope that whatever the past or present circumstances of their relationship, engagement, parenthood and breakup have been, that all their future choices about love, marriage and child-bearing will be left entirely up to them.

Gov. Palin's office has offered a "no comment," which raises at least one of my eyebrows since her office has been quick to deny other stories. The Star blog item ends with a breathless teaser: "For more photos and details, including the hate-filled text message Bristol sent Levi, the cheating rumors, the lies about Bristol's schooling, the Johnston family's plan to win back Tripp and exclusive photos of the baby boy, pick up the March 23 issue of Star, on stands now!"

Now, if you'll excuse me, I think I need a shower.