Stick it in your earmark

President Obama urges pork reform and signs a bill with earmarks in it on the same day. Republicans make an unconvincing show of outrage. 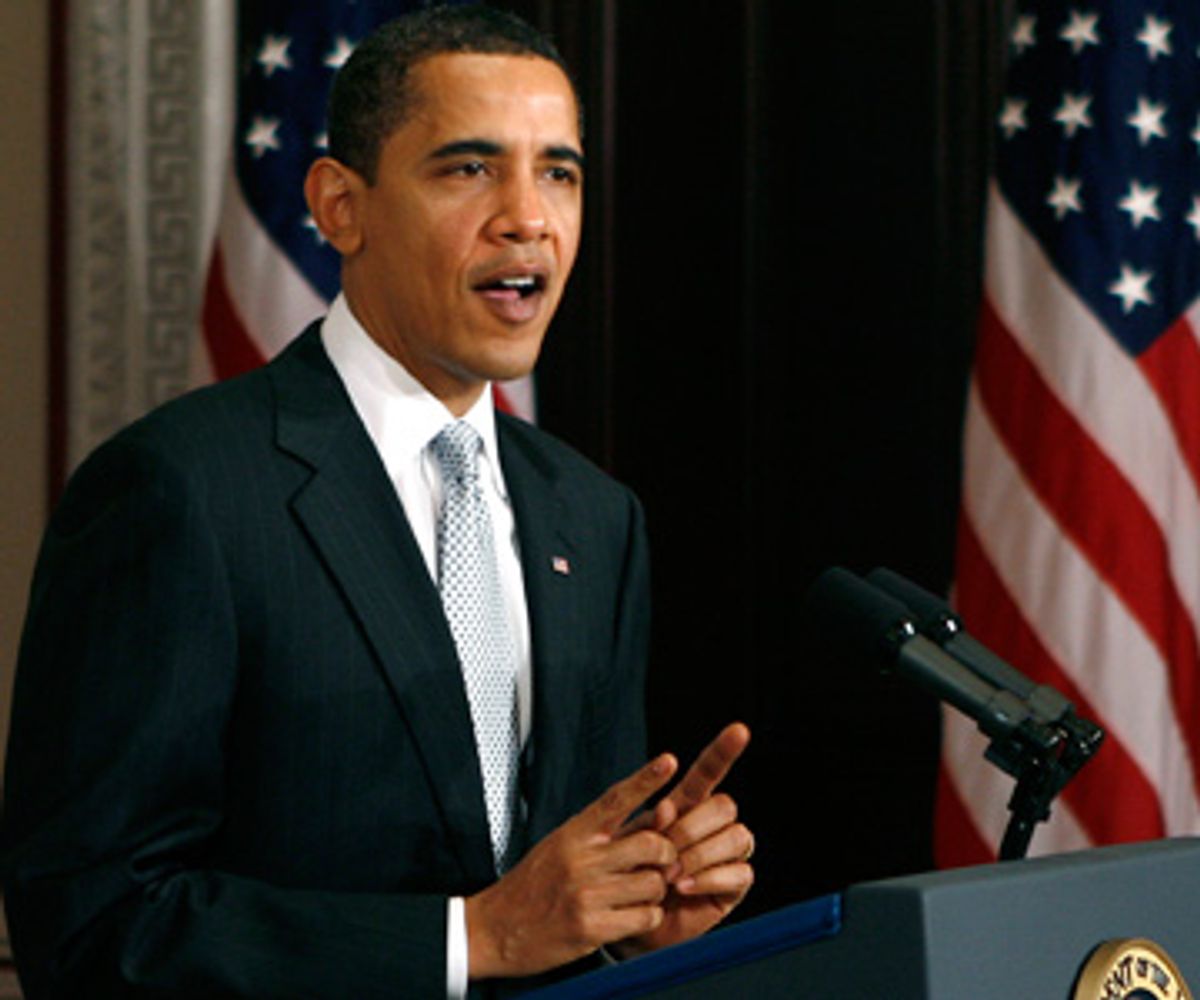 The scene in the Eisenhower Executive Office Building Wednesday morning had to be inspiring to good-government types. There was President Obama, striking a mighty blow against earmarks, the under-the-radar gifts Congress just can't stop tucking into spending bills, by calling on lawmakers to reform the way such projects are handled from now on. "If we're going to solve our economic crisis; if we're going to put Americans back to work; if we're going to make the investments required to build a foundation for our future growth," Obama said, "then we must restore the American people's faith that their government is working for them, and that it's on their side." The only thing missing was the dramatic music to signal the hero's victory over evil.

Or the scene might have been inspiring, if the White House hadn't followed it a few hours later by e-mailing reporters with official notification that Obama had signed a $410 billion spending bill into law, complete with nearly $8 billion in -- yes, you guessed it -- earmarks by Congress. The notification also included five objections to specific provisions in the bill and an explanation of why the administration would effectively ignore them, though Obama had just declared on Monday that such George W. Bush-esque "signing statements" were too easily abused. Perhaps the awkward combination of the earmarks and the objections, even as the administration was busy decrying both, explained why the notification came as a PDF attachment to a one-line e-mail, with none of the usual pomp of a public signing ceremony.

Ordinarily, calling for a reform of the earmark process on the very day that you sign billions of dollars' worth of lawmakers' pet earmarks into law would be a tough act to pull off. But Obama's Republican critics, who have been howling about the earmarks in the spending bill for weeks now, earning as much cable airtime as a missing child with their semi-feigned fiscal outrage, didn't exactly go all out to stop him. John Boehner's spokeswoman mocked Obama for promoting earmark reform while signing a bill into law that contained 9,000 earmarks, but the GOP effort was more theatrical than substantive. That's because the GOP has its own porky problems: 40 percent of the earmarks in the legislation were requested by Republicans, including some of the very Republicans who were shocked -- shocked -- by the price tag of the spending bill. For example, Sen. David Vitter, R-La., voted against the bill, which he called "bloated," even though part of the bloat included $249 million in earmarks he himself had requested. As President Obama noted, "I [find] it ironic that some of those who railed the loudest against this bill because of earmarks actually inserted earmarks of their own -- and will tout them in their own states and districts.”

At least one of the Republican critics seemed to mean it, however. According to Obama's plan, any new congressional earmarks should be posted on lawmakers' Web sites ahead of time and go through competitive bidding if private companies will get money out of them. The White House will also try to eliminate any earmarks that don't seem to serve the public interest. Obama's old rival John McCain was not satisfied. "The president either doesn't get it or he refuses to directly attack the evil that is earmark, pork barrel spending here in Washington," McCain told Fox News.

McCain spent most of 2008 railing about earmarks, and if you got all your information about politics from the McCain campaign, you would probably think eliminating pet projects by lawmakers would solve all the world's problems. You would probably be wrong, though; as Obama pointed out in debates last year, earmarks make up a minuscule percentage of the federal budget. The earmarks in this spending bill added up to less than 2 percent of the total tab. That's why the Obama administration decided to push it through without haggling about earmarks; the point of the spending bill was to get the government funded for the rest of the year. (Still, in their attacks on Obama's supposed fiscal incompetence, lately GOP leaders have started rolling the spending bill and its earmarks in with the stimulus package, landing on a new talking point that says Obama has spent a billion dollars an hour since his inauguration.)

McCain may be right that Obama's earmark reform is not transformational. It certainly seemed to go down easily on the Democratic side of the aisle, perhaps because it had been cleared with Democratic leaders beforehand, and also because some of what the president is now asking Congress to do was already in the works anyway: The plan to require lawmakers to post their earmarks publicly had already been in a reform plan House Democrats put out in January. "He could have set the bar high," said Steve Ellis, vice president of the budget watchdog group Taxpayers for Common Sense. "He really could have demanded change, but he just essentially sang off the sheet of music that Congress gave him." That music may not have sounded very pretty Wednesday, but if it quiets the GOP's false outrage over the earmarks issue, the White House will probably take it.