The sanctity of AIG's contracts

Nothing is easier or more common than finding ways to reduce or avoid oppressive contractual commitments.

We are a country of law. There are contracts. The government cannot just abrogate contracts. Every legal step possible to limit those bonuses is being taken by Secretary Geithner and by the Federal Reserve system.

The UAW announced Tuesday that it reached the tentative agreement with General Motors Corp., Chrysler LLC and Ford Motor Co. over contract concessions, as GM and Chrysler sent plans to the Treasury Department asking for a total of $39 billion in government financing to help them survive.

Concessions with the union are a condition of the $17.4 billion in government loans that the automakers have received so far.

Apparently, the supreme sanctity of employment contracts applies only to some types of employees but not others. Either way, the Obama administration’s claim that nothing could be done about the AIG bonuses because AIG has solid, sacred contractual commitments to pay them is, for so many reasons, absurd on its face.

As any lawyer knows, there are few things more common – or easier -- than finding legal arguments that call into question the meaning and validity of contracts. Every day, commercial courts are filled with litigations between parties to seemingly clear-cut agreements.  Particularly in circumstances as extreme as these, there are a litany of arguments and legal strategies that any lawyer would immediately recognize to bestow AIG with leverage either to be able to avoid these sleazy payments or force substantial concessions.

Since the contracts are secret and we’re apparently just supposed to rely on the claims of AIG and Treasury Department lawyers, it’s impossible to identify these arguments specifically.  But there are almost certainly viable claims to be asserted that the contracts were induced via fraud or that the bonus-demanding executives themselves violated their contracts.  Independently, it’s inconceivable that there aren’t substantial counterclaims that AIG could assert against any executives suing to obtain these bonuses, a threat which, by itself, provides substantial leverage to compel meaningful concessions. Many of these executives were, after all, the very ones responsible for the cataclysmic losses.

The only way a company like AIG throws up its hands from the start and announces that there is simply nothing to be done is if they are eager to make these payments.  One might expect AIG to do so -- they haven't exactly proven themselves to be paragons of business ethics -- but the fact that Obama officials are also insisting that nothing can be done (even while symbolically and pointlessly pretending to join in the populist outrage over these publicly-funded "retention payments") is what is most notable here.

Legal strategies aside, just as a business matter, one of the first steps taken by every company in severe distress is go to its creditors, explain that it cannot make the required payments, and force re-negotiations of the terms.  That’s as basic as it gets.  To see how that works, just look at what GM and other automakers did with their union contracts – what they were forced by the Government to do as a condition for their bailout.  Obviously, if a company goes into bankruptcy, then contracts to pay executive bonuses are immediately nullified, but the threat of bankruptcy or serious financial distress is, for obvious reasons, very compelling leverage to force substantial concessions. And the idea that, in this economy, AIG executives (of all people) will be able simply to leave and go seek employment elsewhere unless they receive their "retention bonuses" (even assuming that’s an undesirable outcome) is nothing short of ludicrous.

There may be other reasons why the Treasury Department decided it wanted AIG to pay these bonuses (Marcy Wheeler considers some of those reasons here), but this claim from Larry Summers that the sanctity of contracts precludes any alternatives is not just false, but insultingly so.  It's difficult to recall anything quite so vile as watching hundreds of millions of dollars in taxpayer money flow to AIG executives.  One would expect the Obama administration to do everything possible to prevent that from happening.  Instead, they seem to be doing the opposite.

UPDATE:  Jane Hamsher has more here on AIG's insultingly frivolous claims as to why these contract obligations are unavoidable, and here FDL has a petition, to be delivered to the House Financial Services Committee during Wednesday's hearing on the AIG payments, demanding full disclosure before any more payments are made.

On a related note, could someone please reconcile Larry Summers' emphatic declaration that "we are a country of laws" with this: 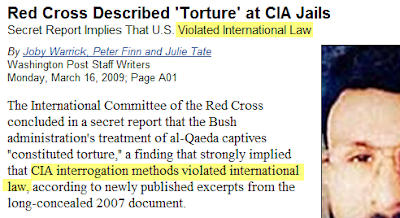 To use Larry Summer's eloquent phrase (perversely deployed to justify the AIG bonus payments):  if "we are a country of law," we would probably do something about these severe violations of law that are right in front of our faces, particularly since we all know exactly who the lawbreakers are.

Apparently, this "we are a country of law" concept means that hundreds of millions of dollars in taxpayer money must be transferred to the AIG executives who virtually destroyed the financial system, but it does not mean that something must be done when high government officials get caught plainly breaking the law.  What an oddly selective application of the "rule of law" this is.

UPDATE II:  In comments, EJ has an excellent suggestion as to how the Government can enable AIG not to pay these bonsues:

UPDATE III:  Obama is now sounding the right notes, but it remains to be seen whether it's followed by any real action or whether it's just a way to placate the growing, palpable "populist anger."