Is Obamanomics conservative or revolutionary?

If you look only at the small print, the president's economic program looks modest. If you look at the big picture, it's radical. 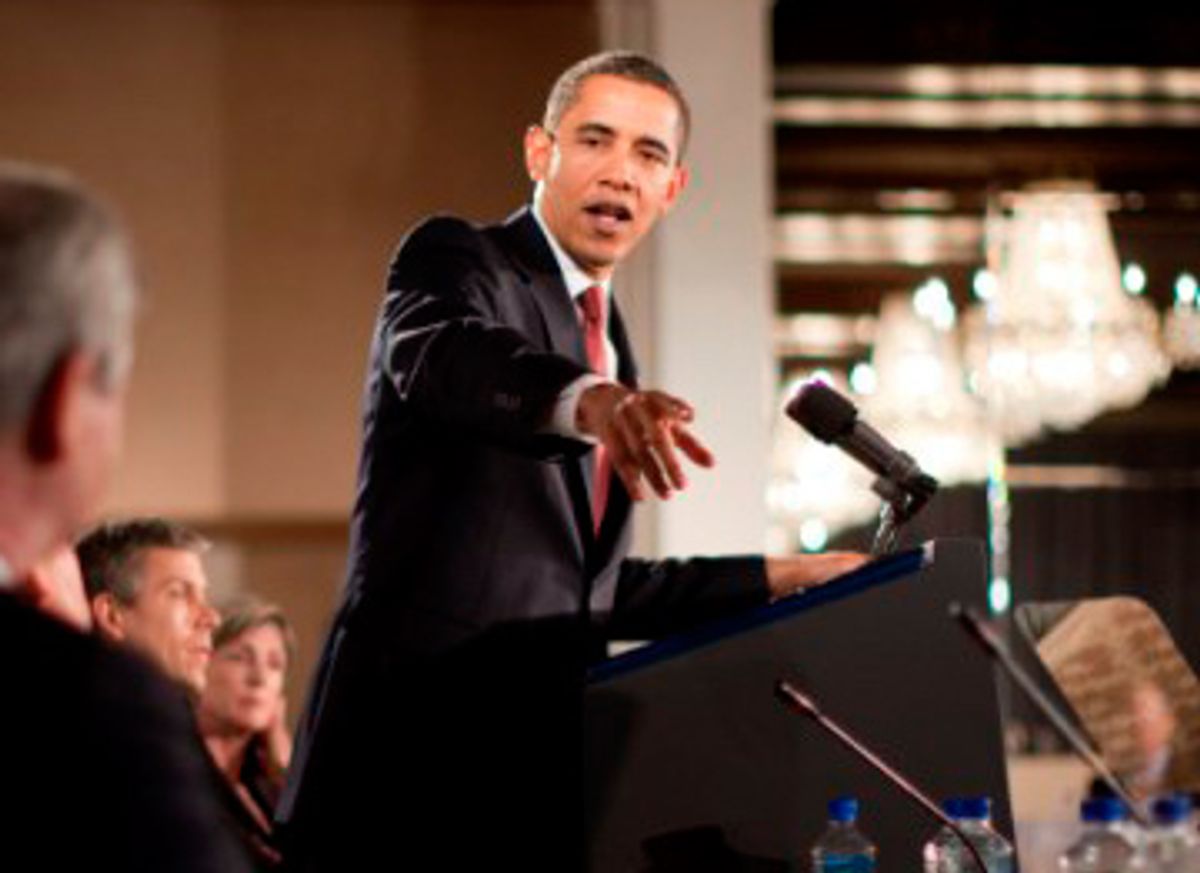 There are two ways to see Obamanomics.

The first, much preferred by the White House, is as a set of initiatives so modest as to hardly merit a raised eyebrow. Yes, steps must be taken to deal with the current economic crisis. But assuming the economy recovers next year, Obama's budget projects that government spending by the end of the decade will drop to around 22.5 percent of GDP, which is about where it was under Reagan.

What about those tax hikes on the wealthy? Obama merely restores the top two marginal income tax rates to what they were in the 1990s, the capital gains rate to its lowest level during that same prosperous decade, and the rate on dividends to a level even lower than it was in the 1990s. And even these modest reversions to the 1990s will affect only the wealthiest 3 percent of Americans, and not until 2011. Ninety-seven percent of small businesses won't pay a dime more. True, the very rich won't be able to deduct quite as much as they can now for their mortgage interest and charitable donations, but this is hardly revolutionary, either. In fact, it's another throwback -- to the limits in place under Ronald Reagan. All told, taxes are projected to total 19 percent of GDP by the end of the decade. That's even lower than it was in the late 1990s.

Modest as they are, these taxes will generate enough revenue to pay for half of what's needed for universal healthcare and still reduce the deficit by about $750 billion over 10 years -- to 3.1 percent of the GDP by the end of the decade.

But isn't universal healthcare itself a pretty radical step? Not according to this view. The other half of what's needed to pay for universal healthcare will come from health-care savings that are also necessary to keep the current big healthcare entitlement programs -- Medicare and Medicaid -- affordable. It's just common sense: Allow government to use its bargaining leverage under Medicare and Medicaid to lower drug prices, strengthen Medicare pay-for-performance incentives, and institute better disease management, prevention, and health information technologies.

What about the environment? Isn't cap and trade a huge deal? Not at all. Instead of heavy-handed regulation, it's a market solution to the problem of global warming. Government merely sets an overall cap on the amount of carbon dioxide to be allowed into the atmosphere, which drops annually, and then requires firms to bid for permits to pollute within that overall cap. Firms can buy and sell permits to each other; they can innovate to reduce pollution even further. Such a system will generate enough revenue to give 95 percent of Americans a yearly refundable tax credit of $400 and also finance a modernized electricity grid and research and development in renewable energy.

But isn't the Obamanomics approach to educational reform expensive and intrusive? No. By this view, it's very mainstream and incremental -- and it doesn't impose on the prerogatives of states and locales. It expands the tax credit for college tuition to $2,500 a year and increases Pell Grants to $5,500 yearly -- almost negligible increases, given how fast tuitions are rising. It cuts subsidies to banks participating in the student-loan program, which is exactly what Bill Clinton did, and it provides some funds for early childhood education.

So there we have it: Obamanomics as pragmatic, incremental, centrist, even conservative.

But there's another way to view Obamanomics -- as an economic philosophy exactly the opposite of the one that's dominated America for more than a quarter century.

The basic idea of Reaganomics was that the economy grows from the top down. Lower taxes on the wealthy make them work harder and invest more, and the benefits trickle down to everyone else. Rarely in economic history has a theory been more tested in the real world and proven so wrong. In point of fact, nothing trickled down. After the Reagan tax cuts, increases in the median wage slowed, adjusted for inflation. After George W. Bush's tax cuts for the wealthy, the median wage actually dropped. Meanwhile, most of the income went to the top. In 1980, just before the Reagan revolution, the richest 1 percent took home 9 percent of total national income. But by 2007, the richest 1 percent was taking home 22 percent.

Obamanomics, by contrast, holds that an economy grows best from the bottom up. Obama's program increases taxes on the top and uses the proceeds to raise the living standard of average Americans by giving them lower taxes, better schools and more affordable health insurance. That may not seem very radical, but compared with the last quarter century it's revolutionary.

Reaganomics didn't believe in public investment, except perhaps when it came to the military. Everything else was considered government spending, which was assumed to be wasteful. Hence, the cuts (adjusted for inflation) during Reagan, Bush I and Bush II in education, job training, infrastructure, and basic research and development. And the reluctance to expand health insurance except when it came to corporate welfare for the pharmaceutical industry.

But Obamanomics is a committed to these forms of public investment. And there's good reason: In a global economy, capital moves to wherever it can get the best deal around the globe. That means capital and jobs go to nations that can promise high returns either because labor is cheap and taxes and regulations low, or because labor is highly productive -- well-educated, healthy and supported by modern infrastructure.

Which do we want? For the better part of the last quarter century our implicit economic strategy has tended toward the first. But that's a recipe for lower wages and a lower living standard for most Americans, along with widening inequality. The only resource that's uniquely rooted in a national economy is its people -- their skills, insights, capacity to collaborate, and the transportation and communication systems that link them together. Everything else -- including capital, technology, designs, even plant and equipment -- can move around the globe with increasing ease.

Bill Clinton talked a lot about the importance of public investment, but he failed to do much about it because he came to office during an economic expansion, and the major worry then was excessive government spending leading to inflation. Obama comes to office during the biggest downturn since the Great Depression, and although he doesn't talk much about public investment, his plan represents the largest commitment to it in 40 years.

Reaganomics' third principle was that deregulated markets function better. They do in many respects, but not always. And when they don't, all hell can break loose. Energy markets were deregulated, and we wound up with Enron. Carbon emissions weren't controlled, and now we face global warming. Financial markets were deregulated, and we have a global meltdown. Obamanomics, by contrast, accepts that government has an important role in setting the rules of the capitalist game: Setting an overall cap on carbon emissions, ensuring that products and foods are safe, maintaining the solvency and security of financial companies.

Under Reaganomics, government was the problem. It can still be a problem. But Obamanomics recognizes there are even bigger problems out there that can't be solved without government. By building the economy from the bottom up, recognizing the central importance of public investment, and understanding that markets cannot function without regulation, Obamanomics finally reverses and repudiates the economic philosophy that has dominated America since 1981.

If you look only at the small print, Obamanomics looks conservative. If you look at the big picture, it's revolutionary.