Take this bonus and shove it

President Obama is raising his voice to condemn AIG executives. But singing an angry song may be all he can do about the fat paychecks. 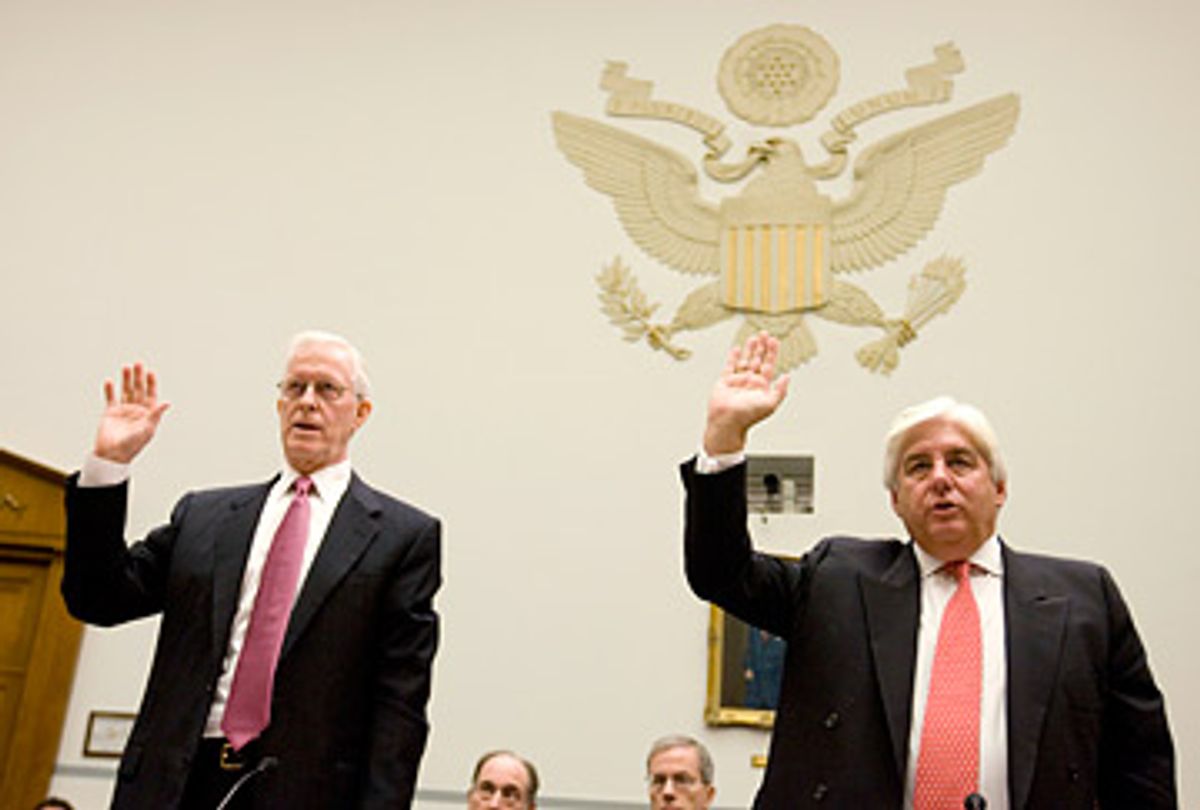 "Bonus" doesn't quite seem like the right word for the payouts that AIG executives got late last week. The insurance company lost $108 billion in 2008; the federal government, which forked over $170 billion to keep it in business since last fall, now owns 80 percent of the company. But AIG officials still felt compelled to pay $165 million in "retention bonuses" to people whose dealings in bizarre financial derivatives helped unravel the company and the global economy along with it. After such a dynamite performance, "plunder" or "booty" might do a better job of describing the extra pay.

No matter what you call it, though, whoever got the bonuses probably ought to cash the checks pronto, and then go hide. By nightfall Monday, politicians in both parties were on the verge of assembling a posse to go looking for the executives to tear them limb from limb. And the sheriff at the head of the unruly mob was none other than President Barack Obama.

"How do they justify this outrage to the taxpayers who are keeping the company afloat?" Obama asked at an afternoon event that was supposed to focus on the administration's aid to small-business owners. Late in the morning, White House aides stuck the AIG lines into the top of his prepared remarks and then alerted reporters to look out for them. The administration has obviously realized, along with everyone else in Washington who depends on the approval of voters to keep their jobs, that AIG executives are the hottest target going right now for government wrath. "In the last six months, AIG has received substantial sums from the U.S. Treasury," Obama said. "And I've asked [the Treasury Department] to use that leverage and pursue every single legal avenue to block these bonuses and make the American taxpayers whole."

But saying the government will get the money back, and doing it, might be two different things. Before the public outrage, AIG officials reportedly argued, and the Treasury reportedly agreed, that they were legally required to pay the bonuses by the contracts they'd signed with the recipients. On Capitol Hill, aides who looked at the laws involved weren't sure what the administration would be able to do about the payments. White House spokesman Robert Gibbs said Obama had ordered a review of options, which didn't exactly inspire confidence that officials would soon be swooping in with the rescued money. AIG is still drawing money from the $700 billion corporate bailout fund Congress approved last fall, so the administration's new rules limiting executive pay don't apply.

That's not to say the government won't make a show of trying, even if the effort fails. The bonuses inspired the kind of bipartisan harmony that has eluded the administration on most issues. Rep. Barney Frank, D-Mass., told NBC's "Today" show the top management at AIG should be fired for "rewarding incompetence." A subcommittee of the House Financial Services panel scheduled a hearing Wednesday to hear from AIG CEO Edward Liddy and others about the company. House Minority Leader John Boehner, R-Ohio, chimed in, demanding an "exit strategy" from the entire business of bailing out Wall Street firms. Senate Majority Leader Harry Reid, D-Nev., took to the Senate floor to declare the bonuses "a breach of public trust," and House Speaker Nancy Pelosi said Treasury should "use whatever tools at its disposal to make AIG repay taxpayers" -- which conjured up images of Treasury Secretary Timothy Geithner playing the Laurence Olivier role in a remake of "Marathon Man."

Even outside Washington, politicians seized the chance to look tough. New York Attorney General Andrew Cuomo, who may be trying to move up to governor by this time next year, subpoenaed AIG officials to find out who got the bonus money. "If the taxpayer didn't bail out AIG, those contracts wouldn't be worth the paper they’re printed on," Cuomo told reporters. "Just because there's a contract doesn't mean there's no way around the contract."

It's not hard to see why the bonuses made the insurance giant public enemy No. 1. Voters are so furious about taxpayer money going to Wall Street, and so resentful that financial wizards still took down seven-figure salaries last year while 401K accounts evaporated, that there's no political downside to attacking anyone connected to it all.

"[Voters] wouldn't mind seeing some of the executives hanging from lampposts on Wall Street," said Glen Bolger, a Republican pollster. If the administration is going to have to come back to Congress to ask for more money to help stabilize banks -- a prospect officials seem resigned to doing -- bashing excessive pay can't hurt. What's harder to figure out is why AIG didn't try harder to find some way around the contracts. "These guys apparently were not reading the newspaper the day the auto execs came to Washington in their private jets," said Democratic pollster Mark Mellman. "It's a difference between running a private company and being in the public light -- they're just not used to it. For anybody who's worked in politics -- for anybody who's ever read a newspaper, let alone working for one -- this is a no-brainer."

But apparently not for financial honchos. When Obama announced the plans to cap salaries, bonuses and corporate expenses for companies that take bailouts in the future, administration officials said they didn't need to worry too much about putting tough enforcement mechanisms into the proposal; publicly airing news of lavish bashes or embarrassing pay deals would help shame companies out of such behavior in the future.

AIG sent its checks out on Friday the 13th, less than two weeks after the government gave it another $30 billion in aid. The company has been even more profligate with money it disbursed to other financial firms than it has with its bonus payments -- it sent $75 billion to other foreign and domestic companies with whom it traded esoteric derivative securities.

If there's any point the bonus brouhaha should drive home, once and for all, inside the Beltway, it's that the financial collapse has gone way past the point of "shame on you." Unless the government gets tougher with the banks it now owns huge stakes in, the Obama administration itself may be soon be bellowing "shame on me."