How to starve yourself to death 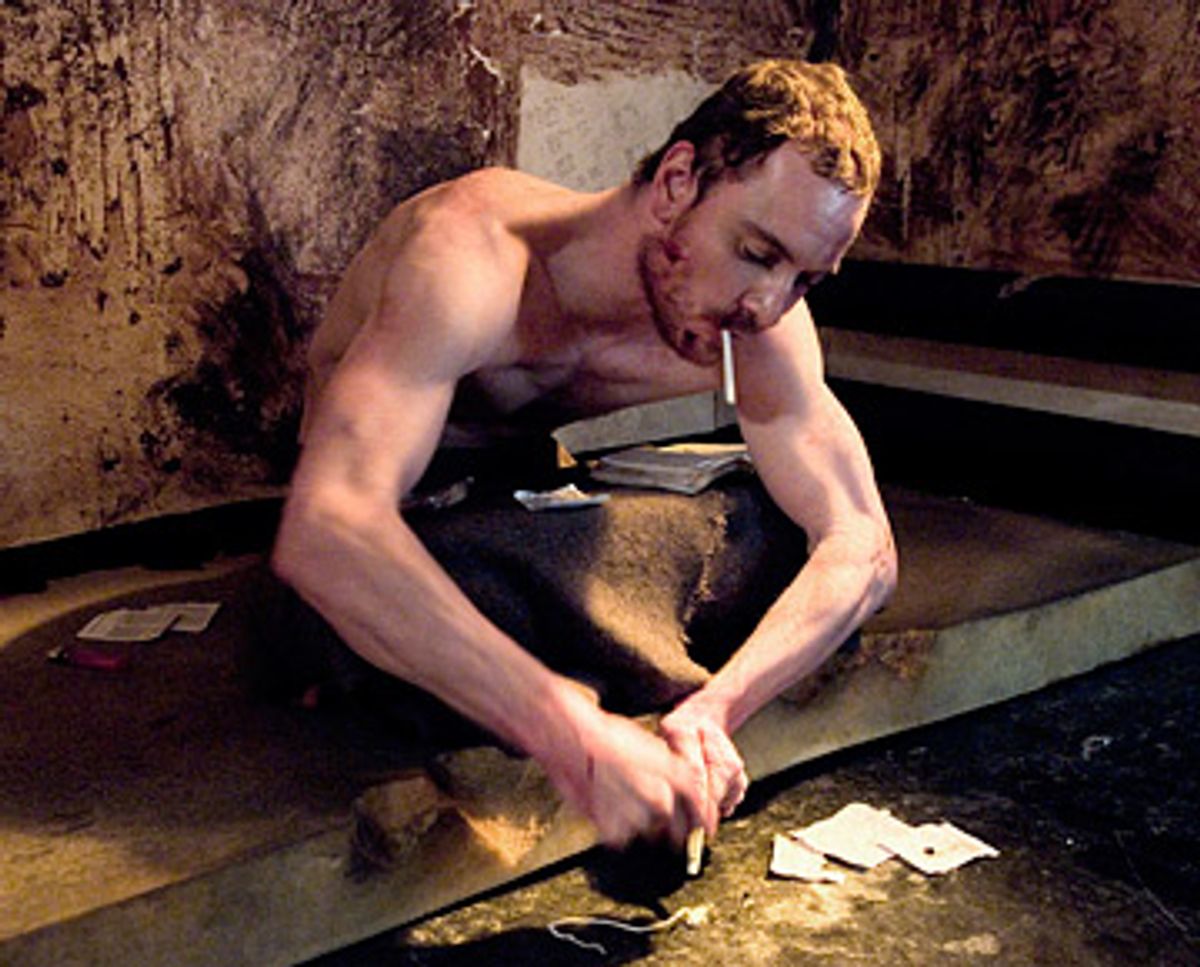 "Hunger" opens with a tremendous racket. A woman is banging a trash-can lid against the street, her face set in determination or anger. From the orchestral, discordant clanging around her, we can gather that many other people are doing the same thing. The next thing we see is completely different, an intimate, domestic image: a man in a bathroom, filling the sink with hot water and wincing as he washes his injured hands. It is daylight, apparently morning. When he is done washing, he sits at the kitchen table as his wife brings him breakfast: fried eggs, sausages, toast.

Only through context do we know what is going on, and viewers will come to "Hunger" -- the award-winning feature film debut of British video and installation artist Steve McQueen -- with widely varying degrees of information. Not much about these early scenes will be clear to American audiences, other than the fact (provided in on-screen text) that the place is Northern Ireland and the time is 1981. British and Irish viewers will of course understand them better, but not completely. Why are the man's hands cut and bruised, for instance? No matter how many books and articles and diatribes about the Irish "troubles" you have absorbed, you won't know that until later in the movie.

"Hunger," which won the Caméra d'Or (for best first film) at Cannes last year, is first and foremost a sculptural or architectural work that asserts the physical reality of the much-mythologized events it depicts. There have been other films about the 1981 hunger strike at the Maze prison (aka Long Kesh) outside Belfast, in which Irish Republican Army prisoner Bobby Sands and nine other inmates starved themselves to death. (Most notable of these is probably Terry George's 1996 "Some Mother's Son," which remains mysteriously unavailable on DVD.)

But McQueen's film is unique in its relentless focus on the nearly incredible everyday details of what happened in and around that prison. IRA prisoners lived naked and filthy in cells smeared with their own excrement and infested with vermin. Messages and contraband were smuggled in and out of Long Kesh in the body cavities of prisoners and female visitors, and occasionally even in the bodies of their infant children. Guards regularly beat and brutalized prisoners, sometimes driving them out of their cells for forcible cold baths, haircuts and delousing. One prisoner refused to eat, and slowly wasted away in pain and delirium, his internal organs failing and his skin covered with weeping sores. (Sands died on May 5, 1981, after 66 days on hunger strike.) Others followed him, at two-week intervals. Prison guards who ventured out in public were sometimes blown up with car bombs or shot through the head on Sunday outings.

It's virtually impossible to write that description without inserting political and ideological context, and it would be misleading to suggest that McQueen and his co-writer, Irish playwright Enda Walsh, completely withhold such things. "Hunger" does not provide the expository background or the conventional character development of an ordinary movie, but it isn't quite a non-narrative or experimental work either. Watching "Hunger" for the second time, I see it secondarily as a puzzle or intellectual challenge, designed to confront the issue of whether information is actually helpful, and how much or how little of it we need to understand historical events.

Do we need to know that the refusal to wear prison clothing or to wash or finally to eat prison food were all part of a gradually escalating IRA strategy, designed to force the British authorities to grant privileged political-prisoner status to men the British regarded as terrorists? Would it help to learn that Sands' hunger strike caused angry worldwide protests, or that -- to the British government's intense embarrassment -- he was elected to Parliament from a majority-Catholic Northern Ireland constituency four weeks before he died? You may glean those things from the thin scattering of info throughout the film, or you may not. McQueen is more concerned with showing us what life in Long Kesh was like in practice: Young IRA prisoner Davey Gillen (Brian Milligan) tries to masturbate under his blanket in a room encrusted with weeks worth of shit, while out of the corner of his eye he sees his sleeping roommate's pillow alive with unidentifiable white crawly things, maggots or bedbugs or lice.

Do we also need to know that Ulster Protestant prison guards like Ray (Stuart Graham), the man with the bruised knuckles, felt humiliated on one side by their disgusting working conditions and humiliated on the other by the British government, which talked tough in public but continued to negotiate with their IRA enemies in secret? Or that Northern Ireland prison guards were the target of a long-running intimidation and assassination campaign, and that 16 of them were murdered during the period of the Maze protests? That statistic emerges at the very end of the film, but the rest of that information you have to pick up by inference or not at all.

And then there's the fact that I am describing things in words that McQueen and Walsh describe almost entirely without words. The first half-hour of "Hunger" includes, at most, two minutes' worth of comprehensible spoken dialogue, along with some snippets of news broadcasts and parliamentary speeches by then-prime minister Margaret Thatcher, professing imperious indifference to the fate of IRA prisoners or the outcome of the hunger strikes.

That initial third of the film is also misleading in that we meet two people -- Ray, as he prepares to go to work at the Maze, and Davey, as he arrives there to serve his sentence -- who seem as if they will become central characters. In fact, we learn almost nothing about them, except that in this context they are playing their parts, Ray as a dispenser of harsh discipline and Davey as a loyal IRA soldier who lives "on the blanket" as ordered. (The woman with the trash-can lid never reappears at all.) The real protagonist of "Hunger" is of course Bobby Sands (played memorably by the German-Irish actor Michael Fassbender), who seems to rise unnoticed, almost magically, to the top of its chaotic human stew.

During the concluding section of "Hunger," which follows Sands through his final weeks in the prison infirmary, there is even less talking, if that's possible. McQueen has rejected suggestions that he intentionally depicts Sands' death as a Christlike agony, but to say that such comparisons only exist in the eye of the beholder is not to say they don't exist at all. Religion is scarcely mentioned in this film, and is sometimes described as playing only a minor or accidental role in the long-running Irish conflict. But the hunger strikes were consciously designed to appeal to the Roman Catholic and Irish nationalist ideals of martyrdom, which seemed repulsive and bizarre to loyalist Protestants.

In between those two sections, though, comes a sudden volcanic eruption of dialogue. Not long after Sands is viciously beaten down and scrubbed clean by guards, in the film's most harrowing scene, he invites a Belfast priest named Father Dominic Moran (Liam Cunningham) to visit him in prison. Cinematographer Sean Bobbitt's odd, elegant and subtly disorienting camera angles abruptly give way to a single fixed-camera shot of almost 15 minutes, as we watch Moran and Sands banter, dodge and butt heads around the forthcoming hunger strike. Amid all that clatter, violence and silence, we are suddenly forced to engage with a Jesuitical debate, conducted in dense Ulster dialect, about the morality and efficacy of sacrificing your life for a cause, and for this somewhat murky cause in particular.

Moran argues that the IRA prisoners have backed themselves into a corner in their refusal to accept various compromises offered by British authorities (e.g., they were allowed to wear "civilian-type clothes," but not their own clothes), and that in the oppressive atmosphere of Long Kesh they have become detached from reality and psychotically obsessed with martyrdom. Sands argues that the hunger strikes will be invaluable as propaganda and recruiting tools, and that while he and others will probably die, the British will eventually capitulate to the prisoners' demands in the short term, and to the IRA's campaign for Irish reunification in the long term. It's a fair summary of positions held at the time, and in the long lens of history it looks like neither man was entirely wrong or entirely right.

In fact, after 10 hunger-strikers died and worldwide outrage grew against the Thatcher government, prison officials did grant IRA detainees a range of special privileges (while never officially acknowledging their "political status"). The Northern Ireland conflict burned pretty hot during the latter years of the Cold War, and Sands and the IRA's campaign became a cause célèbre for leftists around the world. There is a monument to Sands in Havana, and one in Hartford, Conn. Streets in at least four French cities are named after him. Tehran has both a Bobby Sands Street (adjacent to the British Embassy) and, somewhat infelicitously, a fast-food restaurant called Bobby Sands Burger.

On the other hand, it's impossible to say whether Bobby Sands' self-starvation hastened or delayed the end of the Irish conflict. For practical purposes, that arrived with the complicated power-sharing compromise between the Catholic and Protestant communities and British and Irish governments known as the Good Friday Agreement of 1998, although it was not fully in force until 2005. Given Sands' zealous devotion to the cause of a united Ireland, it strikes me as very unlikely that he would have supported peace on those terms. (His sister, Bernadette Sands McKevitt, has been linked to the Real IRA, a splinter group opposed to the agreement that has continued to commit sporadic acts of violence.)

When I met McQueen in Cannes last May, he joked that as a 12-year-old London kid in 1981, he was obsessed with two things: the Tottenham Hotspur soccer team that would win the F.A. Cup that year, and Bobby Sands' hunger strike. Although it's fair to say that McQueen's own position is somewhat closer to that of Sands than, say, to Maggie Thatcher, "Hunger" is more a document born of that fascination than an ideological position-paper. While the fact that McQueen is a black man of Afro-Caribbean ancestry isn't directly relevant to the film, it may mean that he felt even more detached from Northern Ireland politics than other English people did.

What McQueen seems to admire in Sands and the hunger strikers is their almost monomaniacal willpower, and their ability to resist a much stronger oppressor to the point of sacrificing their human dignity and their very lives. This kind of David-vs.-Goliath resistance is by its nature morally unstable. As I think McQueen is well aware, Western viewers are more likely to sympathize with the IRA cause of 1981, which is largely a moot point today, than with similar forms of resistance from Islamic detainees at Camp Delta.

McQueen began making "Hunger" without reference to any present-day news hook -- the Irish conflict was beginning to recede into history, and Abu Ghraib and Guantánamo Bay had not yet made the headlines -- but it's safe to say that he intended the film both as a chronicle of something quite specific and something much more abstract. "Hunger" is a mesmerizing 96 minutes of cinema, one of the truly extraordinary filmmaking debuts of recent years. It's also an uneasy, unsettling experience and is meant to be. It captures a disturbing episode in a dirty little civil war on the northwestern fringe of white Europe. And it captures the ambiguous, dehumanizing theater of oppression and resistance, of brutality and self-sacrifice, that recurs throughout human history as surely as if God had planted its seed.

"Hunger" opens March 20 at the IFC Center in New York, with wider theatrical release to follow. It's also available on-demand from IFC In Theaters, on many cable TV systems.