Now that everyone knows about AIG's bonuses, Congress decides to get angry about them. 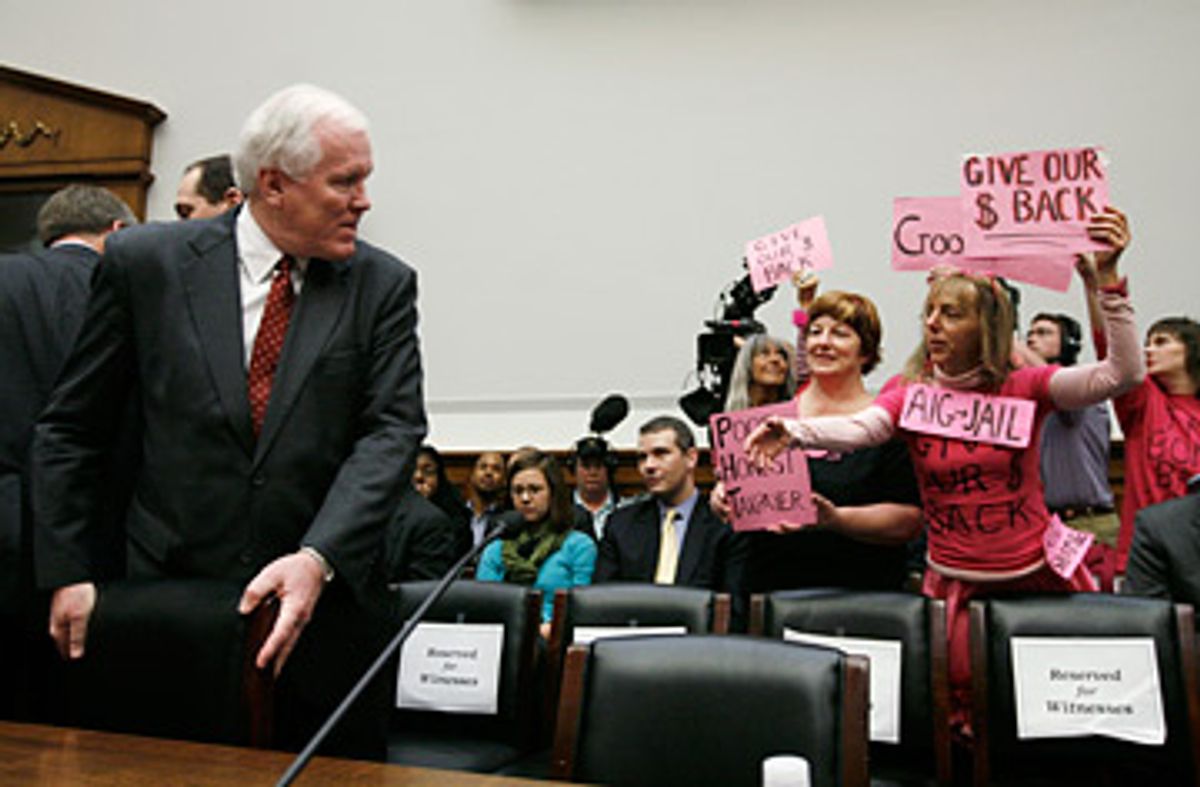 By around lunchtime Wednesday afternoon, the chairman of the House subcommittee on capital markets, Rep. Paul Kanjorski, a Democrat from just outside Wilkes-Barre, Pa., had heard enough. His committee had spent nearly four hours looking into the havoc that AIG's derivatives traders had wreaked on the global economy -- and into the company's payment of $165 million to those very same derivatives traders after the government had dumped billions of tax dollars into saving the firm. But after sitting quietly through most of the testimony, Kanjorski finally lowered his brow, raised his voice, and tore into the people who had upset him the most throughout the hearing.

"I'm a very patient person," Kanjorski explained, brandishing his gavel and glowering down at the witness table. "But don't try my patience. Now, the 'Pink Ladies' back there, respond properly or please exit the room. Signs down!" As it turned out, Kanjorski's glare had been fixed not on AIG CEO Edward Liddy, but on a group of protesters from the peace group Code Pink, positioned strategically just behind the witnesses to get their signs decrying corporate bailouts into the TV shots. And if Kanjorski had them confused with Olivia Newton-John's pack of popular girls in "Grease" and called them "Pink Ladies" instead of "Code Pink," so what? The lesson was clear: Sure, you can give $165 million to a bunch of rich derivatives traders, but if you really want to provoke the wrath of Congress, disrupt their choreographed show of outrage with some off-message signs in the background.

Not that AIG hadn't earned the outrage. Liddy, who didn't take over the company until after the U.S. government had become its majority owner in mid-September, did a reasonably good job of sounding competent, apologetic and humble. But he stuck to his guns on the bonuses, which in his telling, started to sound more like ransom. "The unit that is at the root of our financial problems, that portfolio remains very large -- $1.6 trillion -- and it continues to contain substantial risk," he said. "I'm trying desperately to prevent an uncontrolled collapse of that business. [Paying bonuses] is the only way to improve AIG's ability to pay taxpayers back quickly and completely and the only way to avoid a systemic shock to the economy that the U.S. government help was meant to relieve." In other words, in order to save the company, he had to give more money to the people who destroyed it. Never mind that 11 of the 73 AIG employees who got more than $1 million in "retention bonuses" have since quit their jobs.

The government is now scrambling to get the money back, even though the bonuses represent about .1 percent of the $173 billion U.S. taxpayers have shoveled into AIG's coffers lately. Treasury Secretary Tim Geithner says $165 million will be withheld from the $30 billion the government is set to deliver to AIG soon. Congress is mulling legislation to tax the bonus payments at a special rate, though it's not clear that would be allowed under the Constitution. And Liddy said Wednesday that some of the recipients -- he wouldn't say which ones, or how many -- have already returned the money. AIG is doggedly refusing to disclose the names of the bonus babies; trying to explain why not, Liddy read from two threatening messages he said the company had received. One said the firm's "executives and their families should be executed with piano wire around their necks." That didn't impress Rep. Barney Frank, who noted that most members of Congress had gotten similar threats.

Still, there was something phony about the fury displayed by the lawmakers, and their cynical eagerness to browbeat Liddy. "I assume there's nobody at this hearing today that isn't going to want their five minutes with Mr. Liddy," Kanjorski said, looking around at the four dozen or so members of his subcommittee. Wednesday's hearing had been scheduled six weeks ago, before most of the country had heard about the pending AIG bonus payments -- and before the Washington establishment morphed into a howling mob of villagers with torches and pitchforks, storming toward the failed insurance company's headquarters as if they expected to find Dr. Frankenstein inside. But as news reports this week -- and earlier -- have made clear, the Federal Reserve, the Treasury and even some lawmakers knew the bonuses were in the works long before the checks were delivered last weekend.

Republicans on the panel mostly stuck to the GOP's new script, in which Geithner deserves all the blame for not stopping the bonus payments. (The blame-the-Democrats gambit got some help when Sen. Chris Dodd admitted it was he who had added a loophole allowing bonuses to the stimulus package.) The Republican plan seems clear: Go after Geithner, who hasn't impressed many people so far, to apply indirect pressure on President Obama, who's far more popular. (Rep. Connie Mack, R-Fla., demanded Geithner's resignation Wednesday.) Dodd, whose approval ratings were already falling back home in Connecticut, now seems like another inviting target.

Throughout the hearing, the subcommittee was so caught up in its newly discovered populism that members spent 45 minutes on opening statements alone. Suddenly what had been planned as yet another little oversight hearing by a relatively obscure panel turned into the biggest showdown of the week, and a tailor-made chance for House members to prove they were looking out for the folks back home.

With all that as backdrop, Liddy shouldn't have stood a chance at making it out of the Rayburn House Office Building alive. But a strange thing happened on the way to the public hanging -- it turned out that most members of the subcommittee felt sorry for the AIG boss, who took over only on Sept. 18, after the government had become the company's largest shareholder. He was called out of retirement by the Bush administration to run the company. "We do not intend to harass you in this committee, nor should we," Kanjorski said. Rep. Gary Ackerman, D-N.Y., went even further; remarking on the death threats some AIG officials have gotten, he told Liddy, "I just want to apologize on behalf of the millions and millions of decent Americans."

The sympathy Liddy found could have been due to the company's lavish campaign contributions to lawmakers. AIG and its employees gave $45,793 to members of the House Financial Services Committee in 2007 and 2008 alone, and the firm has given $9.3 million to campaigns over the past 20 years. The very panel that wound itself up to high dudgeon on Wednesday had spent most of the last decade making it easier for AIG to expand from the boring, but consistently profitable, insurance business and get into the glitzier world of credit default swaps, elaborate collateralized tranches and other mostly imaginary financial instruments that piled risk onto the company's back until it finally broke last fall.

Perhaps for that very reason -- that if Liddy wasn't the bad guy here, the politicians might be -- the lawmakers' sympathy had some sharp limits. After apologizing for the death threats, Ackerman went on to imply that Congress would pass laws allowing AIG executives to be waterboarded if they didn't pay the bonuses back to the Treasury speedily. Rep. Judy Biggert, R-Ill., asked with faux naiveté "whether the taxpayers, who own 80 percent of the company, got to vote on these bonuses. Was there any notification or anything?" (Why gee, yes, Congresswoman, your ballot must have gotten lost in the mail.)

Well before Wednesday's hearing dragged into its sixth hour late in the afternoon, it was already clear that the bonus money will make its way from AIG's accounts back to the government soon, even if some of the traders who got paid wind up keeping their cash. The politics are too simple: No one, except Rush Limbaugh, is defending the company. But the episode may have already made it much harder to get any support in Congress for bailing out more banks in the future. The Obama administration, and some outside experts, believe the economy will only get worse if big banks start to fail. Which means the worst damage that AIG's adventures in high finance have caused might be yet to come

Video: Congress gets angry at the AIG hearing