The AIG scandal has made it apparent that we are ruled by a government of men, not laws. 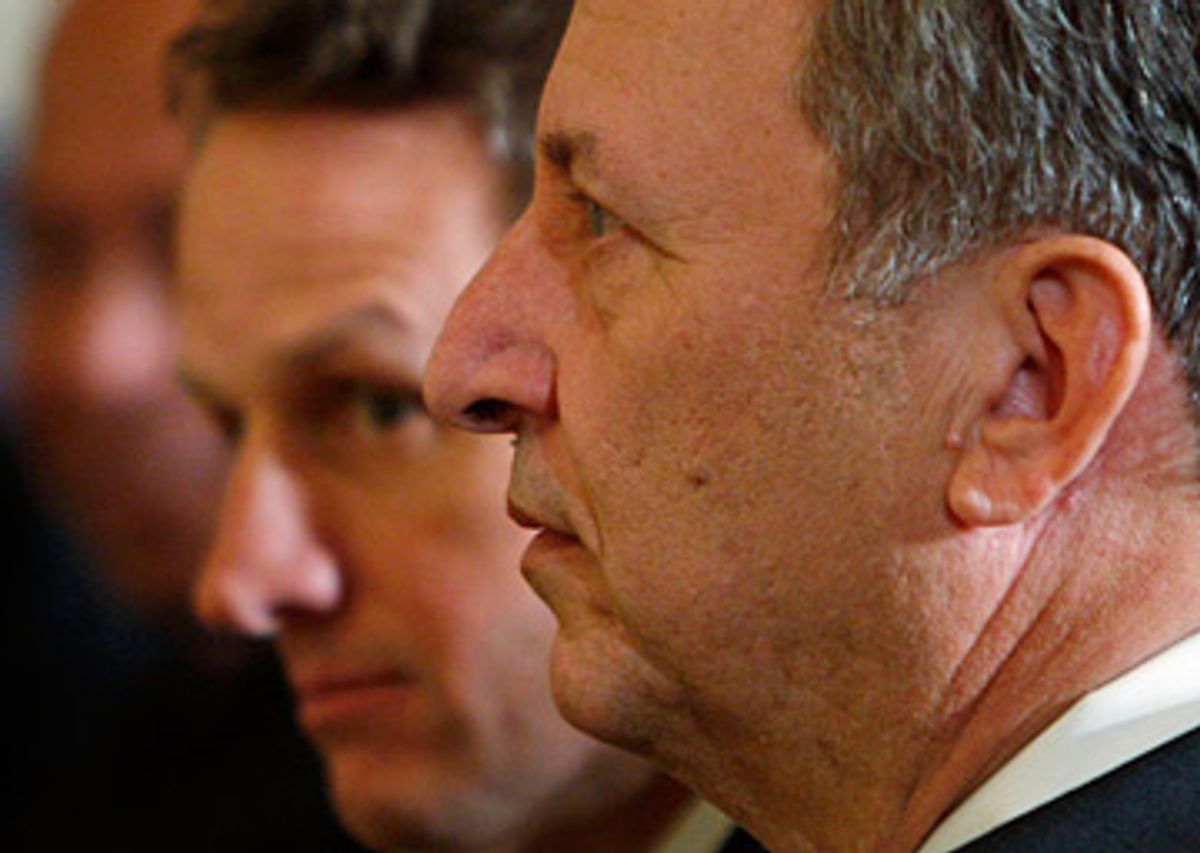 United Steelworkers president Leo Gerard likes to say that Washington policymakers "treat the people who take a shower after work much differently than they treat the people who shower before they go to work." In the 21st century Gilded Age, the blue-collar shower-after-work crowd is given the tough, while the white-collar shower-before-work gang gets the love, and never before this week was that doctrine made so clear.

Following news that government-owned American International Group devoted $165 million of its $170 billion taxpayer bailout to employee bonuses, the White House insisted nothing could be done to halt the robbery. On ABC's Sunday chat show, Obama advisor Larry Summers couched his passive-aggressive defense of AIG's thieves in the saccharine argot of jurisprudence. "We are a country of law -- there are contracts (and) the government cannot just abrogate contracts," he said.

The rhetoric echoed John Adams' two-century-old fairy tale about an impartial "government of laws, and not of men." Only now, the reassuring platitudes can't hide the uncomfortable truth.

Last month, the same government that says it "cannot just abrogate" executives' bonus contracts used its leverage to cancel unions' wage contracts. As the Wall Street Journal reported, federal loans to G.M. and Chrysler were made contingent on those manufacturers shredding their existing labor pacts and "extract[ing] financial concessions from workers." In other words, our government asks us to believe that it possesses total authority to adjust contracts at car companies it lends to, and yet has zero power to modify contracts at financial firms it owns. This, even though the latter set of covenants might be easily abolished.

According to New York Attorney General Andrew Cuomo, these allegedly inviolate AIG agreements promised bonus money the company didn't have and were crafted by executives who knew the firm was collapsing, meaning there is a decent chance these pacts could be invalidated under "fraudulent conveyance" statutes. They also might be canceled via "force majeure" clauses allowing one party to rescind a pact in the event of extraordinary circumstances -- like, perhaps, the collapse of the world economy. (Note: BusinessWeek reports that corporations are already citing the recession as reason to invoke such clauses and nix their business-to-business contracts.)

But, then, those legal cases require a government that treats AIG's shower-before-work employees with the same firmness that it treats the auto industry's shower-after-work employees, not the government we currently have -- the one that believes "the supreme sanctity of employment contracts applies only to some types of employees but not others," as Salon.com's Glenn Greenwald says.

Mind you, this double standard works the other way, too.

Congressional Republicans have long supported the laws letting bankruptcy courts annul mortgage contracts for vacation homes. Those statutes help the shower-before-work clique at least retain their beachside villas, no matter how many of their speculative Ponzi schemes go bad. But for those who shower after work, it's Adams-esque bromides against "absolving borrowers of their personal responsibility," as the GOP announced it will oppose legislation permitting bankruptcy judges to revise mortgage contracts for primary residences.

Certainly, for all the connotations of fairness inherent in American politics' "country of law" catchphrases, most of us know that the selective application of legal principles is as old as the Republic. However, lots of us are only now discovering that inequality is so pronounced that the time of day we bathe determines the enforcement and reliability (or lack thereof) of even the most basic contracts.

We are just realizing that for all the parroting of America's second president, we are ruled by a government of men, and not of laws.