Pay no attention to the treasury secretary behind the curtain 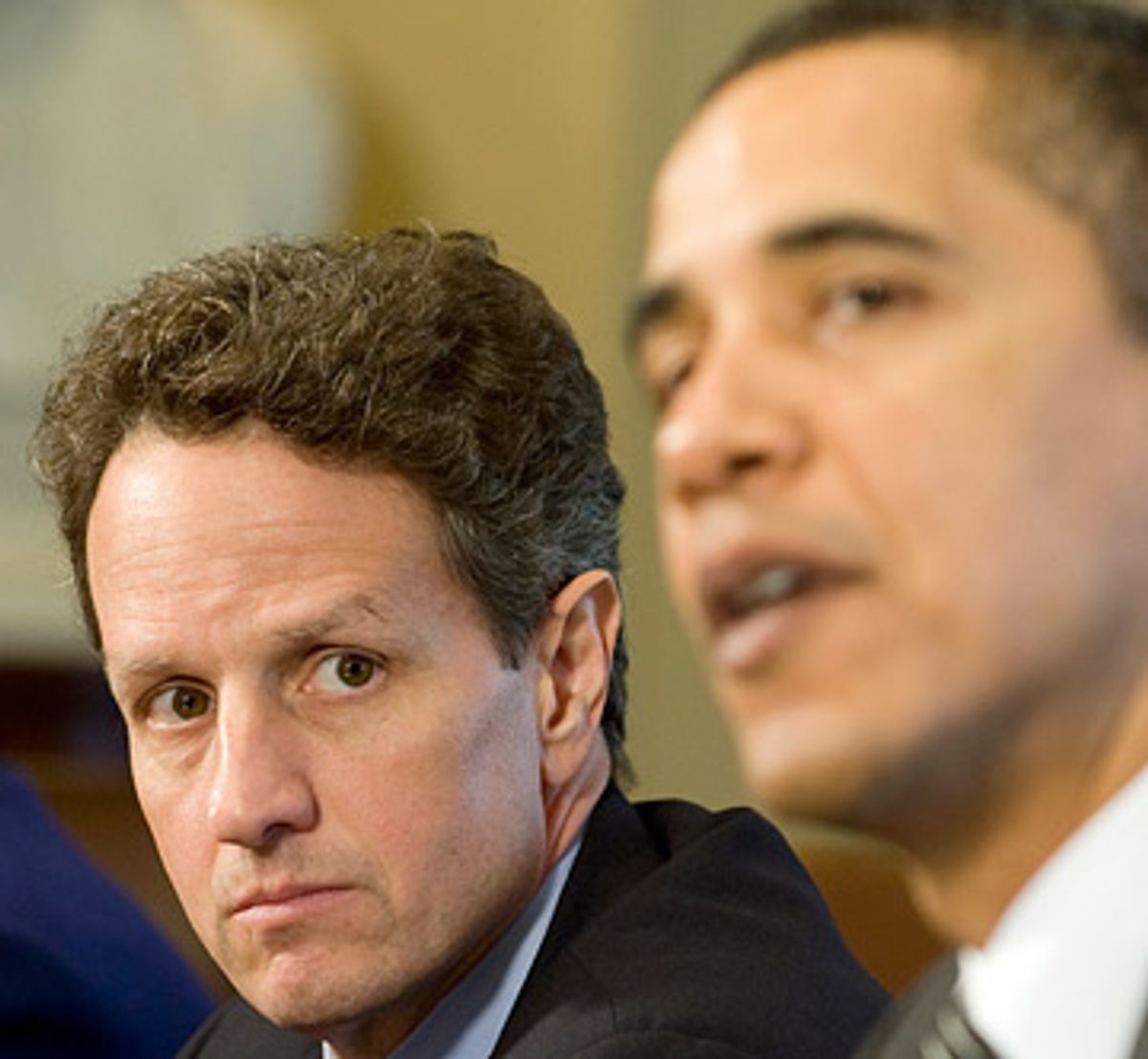 Maybe the secret to fixing the economy is as simple as this: Don't let Tim Geithner appear on TV.

Geithner, the beleaguered treasury secretary, briefed reporters Monday morning on the details of the Obama administration's plan to get bad loans out of the financial system, which -- if it all works the way it's supposed to -- could get banks back into the business of lending money. The plan would have the government team up with private investors to buy bad mortgages and other loans from banks through an auction, then sell them off later at a profit if they recover some value. In theory, taxpayers win (though that remains to be seen), the private investors win (ditto) and the banks get some money for assets that are now worthless because there's no market for buying or selling them -- which means everyone wins, because the credit freeze that's slowly strangling the economy might begin to lift (the biggest unanswered question in the bunch).

But even though no one knows yet whether the plan will work, Wall Street reacted as if the administration had announced the recession was over. Major stock indexes closed up around 7 percent, the biggest single-day gain the markets have seen since the economy first started collapsing last fall. The contrast with last month, when Geithner flopped in his first attempt at explaining how the administration hoped to stabilize the economy, was sharp. Actually, forget last month; just last week, a heterodox herd of pundits and politicians was calling for Geithner to resign after news of the AIG bonus babies broke. Today's mixed reviews (the market was happy, some Democrats were placated, the liberal blogosphere was scornful) were probably all the White House could hope for.

Treasury went to some unusual lengths to manage coverage of the plan. It did not want any visual record of Geithner's less than reassuring countenance. The briefing was what's known in Washington as a "pen-and-pad," though in reality that just means it's closed to still photographers and TV cameras -- laptops and even voice recorders are OK, as long as the recording isn't later put out on the air. Geithner did, however, take questions afterward and later appeared at the White House with President Obama, who made a few remarks for the networks to use. At Treasury, aides distributed a 22-page, glossy info packet on the plan and labeled it "for background use only," meaning none of it could be directly quoted or photographed. And when Geithner finished speaking, a little after 9:30 a.m., one enthusiastic spokesman tried to declare that none of what his boss had said could be reported until later in the day. The reporters in the room all laughed; the gist of Geithner's remarks, and quite a few direct quotes, had already been broadcast around the world, in every form from short Twitter updates to blog posts to full-on wire stories.

All the careful handling was probably because administration officials are starting to realize that whatever strengths Geithner may have as a financial expert, he doesn't always do a very impressive job of coming across as a human being when he's discussing the state of the economy. "I am very confident this scheme dominates all the alternatives," Geithner said at the morning briefing, with a heavy emphasis on "dominates." The term may be popular in financial game theory circles, but Geithner's delivery could make Mitt Romney seem warm and fuzzy. For most of the briefing, he sat hunched over, resting his elbows on the table in front of him. Even his attempt at empathy was clinical and cumbersome: "There is deep skepticism across the country, deep anger and outrage, frustration about the place we are in as a country, where people that were careful and prudent in their financial decisions, businesses that were conservative in how they chose how much leverage they took on, are facing substantial damage because of the actions of a range of institutions that took too much risk and brought our financial system and our economy to the point where we're facing such an acute, deep recession."

But if Geithner's style left something to be desired, reaction to the substance of his plan was cautiously favorable. Never mind the stock markets, which jerk around so much on any given day that it's unwise to use them as a policy benchmark. And never mind New York Times columnist Paul Krugman, whose column bashing Geithner for caution Monday morning and whose calls for a Sweden-style bank nationalization program may have been what prompted Geithner to note, "We're the United States of America. We are not Sweden." Lawmakers -- who don't need to pass any new legislation to make the plan work -- seemed to have gotten over some of the blustery outrage the AIG stories last week generated. "The Treasury Department plan is based on the sound principle that if we are to revive our economy, we must unfreeze the credit markets so people can get the loans they need to keep their small businesses open, buy a car or send their children to college," Senate Majority Leader Harry Reid said in a statement. Liberal economist Brad DeLong defended the plan, picking a fight with Krugman in the process. Even Republicans, who have made Geithner into their top target lately, eased up a bit. "While it’s encouraging that the administration is trying to convince private investment funds to bid on troubled bank assets, Secretary Geithner’s plan is very troublesome because it still puts a huge amount of taxpayer money at risk," said Rep. Connie Mack, R-Fla., in a statement that might sound harsh at first -- but not compared to last week, when Mack became the first member of Congress to call for Geithner's resignation.

The plan does, indeed, put more taxpayer money at risk. Geithner plans to use $75 billion to $100 billion in the existing Troubled Assets Recovery Program as seed money for a new private/public partnership that would buy up, through auctions, any bad loans banks wanted to dump off their books. The auctions, theoretically, would help set reasonable prices for the loans; right now, many banks are still accounting for them at face value, even if they represent foreclosed mortgages, but no one believes they're actually worth what they once were. Private investors would lend the public/private fund money, backed by the Federal Deposit Insurance Corp., to buy the loans, and the government would put up half of the actual cash in the deals.

In an example Treasury officials used, a bank decides it wants to sell off a pool of bad mortgages with a face value of $100. The government auctions the mortgages, and the highest bid is $84 (which means the bank loses $16, instead of the whole $100 on the line now). The FDIC backs $72 worth of loans for the public/private fund to buy the mortgages, meaning the public/private fund has to come up with $12. Treasury kicks in $6 and private investors kick in $6. If the mortgage can eventually be sold for more than $100, everyone wins -- the private investors get a big gain after risking only $6 of their own money, the Treasury gets the same gain, and the FDIC never has to take on the $72 in loans it guaranteed because they're repaid once the mortgages are resold for a profit. But if the mortgage winds up losing money, the private investors are only on the hook for $6. The FDIC has to repay the $72 in loans regardless.

Obama has already proved himself to be the best salesman for his administration's policies, and conveniently enough -- but certainly not coincidentally -- he'll hold another prime-time news conference Tuesday night. Asked by a reporter after his photo op with Geithner Monday how he could reassure skeptical taxpayers, Obama said to wait. "You know," the president demurred, "I'll have a full press conference tomorrow night, and you guys are going to be able to go at it." Geithner's plan may not have won over everyone yet, but if nothing else, it bought the administration time to let the boss pick up the job where the treasury secretary left off.