Obama shoots back and scores

With a sharp retort about AIG, the president was on his game with the press, weaving through questions and driving home his economic plan. 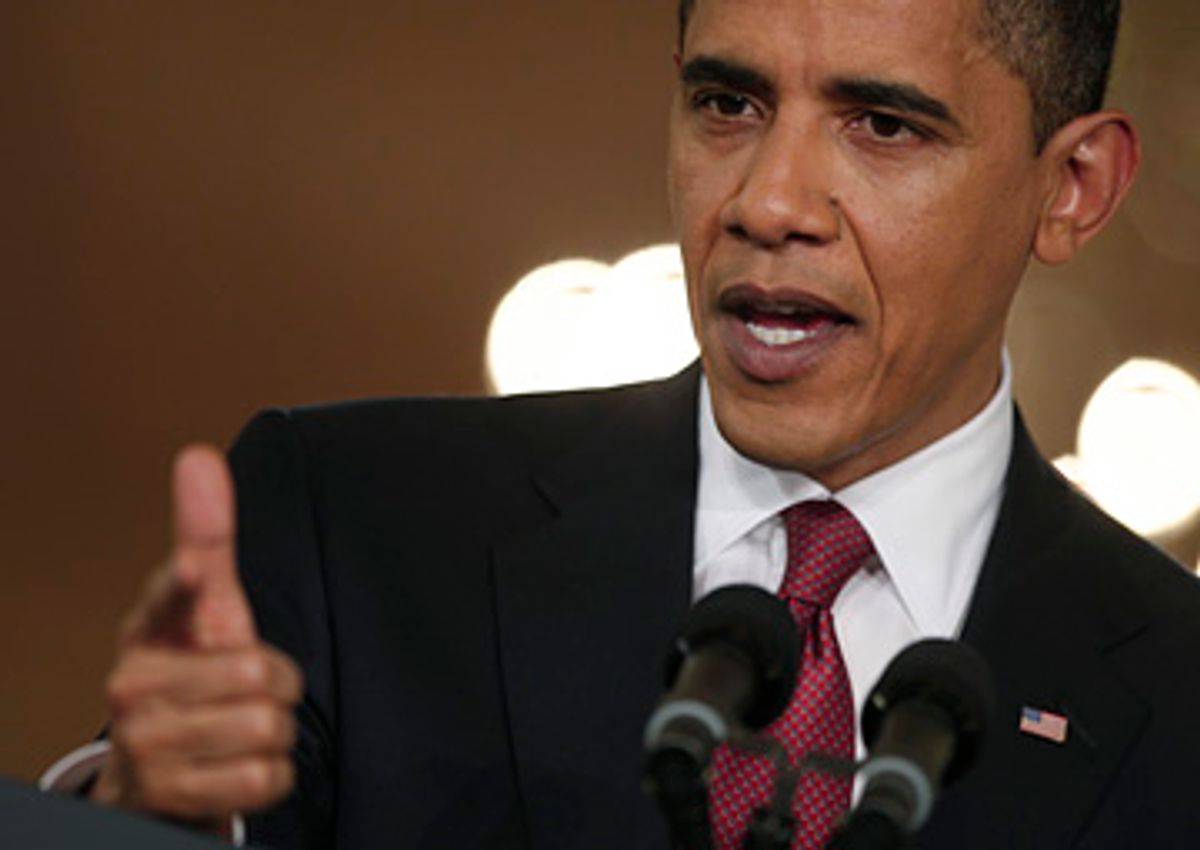 The defining moment in President Obama's prime-time news conference Tuesday night came about midway through. Nearly all the questions up to then had dealt with the ragged economy and the administration's plans to turn it around. So when a reporter asked Obama -- who, as you may have heard, is the nation's first black president -- to talk about how race has affected the first couple months of his time in office, it wasn't entirely clear how he would answer.

Unless, that is, you had been paying attention to the way Obama had focused his answers up to that point. Over and over again, he had been trying to drive home the message that he and his aides understand what the country is going through. So when ABC News' Ann Compton asked, "Has the last 64 days been a relatively color-blind time?" his answer fit right into the flow of the night. "I think that the last 64 days has been dominated by me trying to figure out how we're going to fix the economy, and that affects black, brown and white," Obama replied.

The press conference, Obama's second such formal East Room affair, revealed a president who realized the occasion was mostly about talking directly to voters watching at home. It followed a recent publicity blitz that included a stop on the "Tonight Show" to schmooze with Jay Leno and a "60 Minutes" interview directly after NCAA basketball; as one Republican strategist said, a little ruefully, Obama is his own best surrogate, and the White House isn't afraid to let him sell his own plans.

Compared to his first press conference, when Obama sometimes rambled through long answers, he was far more succinct Tuesday, getting from the question to his message in as few steps as possible. That message was straightforward. "We'll recover from this recession," Obama said during prepared remarks at the top of the press conference, reading from a teleprompter at the back of the room. "But it will take time, it will take patience, and it will take an understanding that when we all work together -- when each of us looks beyond our own short-term interest to the wider set of obligations we have toward each other -- that's when we succeed, that's when we prosper, and that's what is needed right now."

Obama made clear his plan involves government spending, both to help stimulate the withered economy and to fix big problems like healthcare, energy and the whipsaw cycles of boom and bust that led up to the current low. "If we don't tackle energy, if we don't improve our education system, if we don't drive down the costs of healthcare, if we're not making serious investments in science and technology and our infrastructure, then we won't grow 2.6 percent, we won't grow 2.2 percent," Obama said. "We won't grow." Although his budget is coming under heavy fire from Republicans and conservative Democrats alike on Capitol Hill, Obama made clear that he wouldn't back away from its broad outlines. "That's why this budget is inseparable from this recovery," he declared. "Because it is what lays the foundation for a secure and lasting prosperity."

It had been so long since any president spoke unapologetically about public investment that it sounded like a foreign language. Certainly for the last eight years, most of Washington has acted as if government can only get in the way of private businesses, as if no issues are too big or too comprehensive for the free market to solve. That may explain the tone of many of the questions; reporters harped constantly on the deficit, practically ignoring Obama's remarks on how he would spend federal money in order to ask him why he would spend so much of it.

And that, in turn, appeared to fluster the normally unflappable president. CNN's Ed Henry asked Obama why he was willing to drive up the deficit, and why the administration was slow to join in the public flogging of AIG executives last week. Obama answered the budget one first, and when Henry prompted him to take on the AIG question, he unloaded on him. "It took us a couple of days because I like to know what I'm talking about before I speak," he said. It may not have turned out quite like a recent "Saturday Night Live" skit did, but Obama left little doubt of what he thought of the question.

Most of the rest of the night, he kept his cool. When NBC's Chuck Todd asked why Obama hadn't "called for some form of sacrifice" from the public to help with the economic recovery, Obama saw an opening for an easy answer. "I think folks are sacrificing left and right," he said. "I mean, you've got a lot of parents who are cutting back on everything to make sure that their kids can still go to college. You've got workers who are deciding to cut an entire day -- an entire day's worth of pay so that their fellow co-workers aren't laid off."

Asked later about his proposal to cut the percentage of charitable donations the wealthiest taxpayers can deduct from their taxes, Obama spun it cleverly. "If you give $100 and you're in this tax bracket, at a certain point, instead of being able to write off 36 percent or 39 percent, you're writing off 28 percent," he said. "Now, if it's really a charitable contribution, I'm assuming that that shouldn't be the determining factor as to whether you're giving that $100 to the homeless shelter down the street." He cast the debate entirely on his own terms, and managed to make wealthy donors who object to his plan seem cheap in the process.

But if Obama's performance was better than his first one, it may have needed to be. In the six weeks since his prime-time debut, his approval ratings have slid down from stratospheric levels to more realistic ones, even if his polling is still good enough that nearly any of his predecessors would envy him. Critics on the left are grumbling about his plan to rescue banks from their own foolish financial schemes; critics on the right are seizing on the sheer amount of money he's trying to throw at the nation's various problems to argue that he's leading the U.S. toward socialism. In fact, the GOP blasted an e-mail to reporters Tuesday night that tiptoed up to the line of calling Obama a liar -- he "resorted to outright distortion" and repeated "budget myths" that the Republicans rebutted with "facts."

So much for those heady days when Republicans were afraid to cross the president in public. Barely two months into his term, Obama's honeymoon looks like it's already over. By showing up on voters' TV screens for an hour that's usually devoted to "American Idol," he was trying to bring some of the magic back.