After a successful press conference, the president works a tougher crowd –- congressional Democrats. 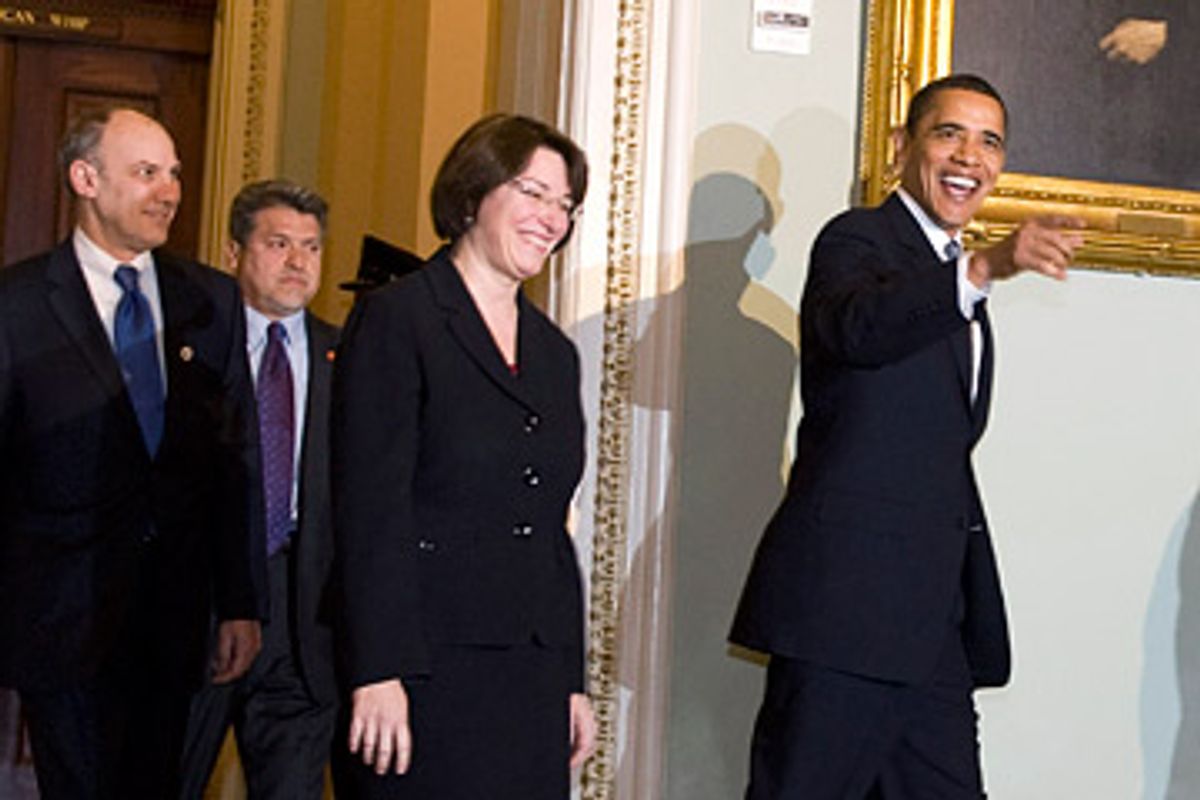 Apparently the easy part was bumping "American Idol" off the air and battling CNN's Ed Henry on live TV. For President Barack Obama, the hard part of selling his budget might turn out to be persuading conservative Democrats not to get in the way.

Facing opposition on Capitol Hill from Republicans (which you might expect) and from his own party (which you might not), Obama is ratcheting up a push to get Congress to go along with his plans to invest heavily in healthcare, alternative energy and education, even if it means the government has to borrow a great deal in the process. So the day after his prime-time press conference, Obama's motorcade ferried him up Pennsylvania Avenue to lunch with his former colleagues in the Senate Democratic Caucus. He'll be back to have lunch with House Democrats Monday. A "virtual town hall" planned for Thursday is also intended to get Obama's message out, as was a canvassing effort that the Democratic National Committee organized over the weekend. Despite all that, the official story Wednesday was that everyone is getting along fine.

The president "is enormously pleased with the progress that both the House and the Senate are making on working toward a budget that reflects the priorities and the investments that he wanted to see in a budget," White House press secretary Robert Gibbs said later in the day. Senate Majority Leader Harry Reid was equally sanguine. "It was vintage Obama," he said after meeting with the president. "He made us all feel content and inspired by where we need to go." The budget fight matters less substantively than politically. The resolution that Congress is working on isn't binding, and Obama doesn't have to sign it, so the debate now is mostly a test of whether the administration and Congress have the same broad priorities.

Nonetheless, behind the scenes the administration appeared to be troubled by early indications that there might be some conflict. An estimate last week by the nonpartisan Congressional Budget Office, which Obama's own budget director used to run, said the proposal that the White House put out last month would lead to cumulative deficits of $9.3 trillion over the next decade, far more than the $7 trillion the administration predicted. Since even the smaller number had already panicked some Democrats, and put the scent of blood in the water for circling Republicans, the estimate didn't help things.

On Wednesday morning, the House and Senate budget committees released their own proposals to counter Obama's. They trimmed the White House plan significantly, dropping some middle-class tax cuts and aiming to cut the overall deficit faster than Obama has proposed. Republicans have already started hammering the administration on spending, and some Democrats -- like Sen. Ben Nelson of Nebraska, Sen. Evan Bayh of Indiana and a slew of "Blue Dogs" in the House -- are getting a little queasy in response. Kent Conrad, D-N.D., who chairs the Senate Budget Committee, made clear over the weekend that he didn't like the deficits in Obama's plan, and his proposal reflected that.

Administration officials, hoping to head off a media narrative that Obama and Democrats in Congress were at odds, decided to stay positive. Aides set up a morning conference call with reporters and budget director Peter Orszag, who declared everything was fine. "[The House and Senate plans] are 98 percent the same as the budget proposal the president sent up in February," he said. The outreach by Obama himself was proactive, rather than reactive. He spent most of his lunchtime visit, senators said afterward, making a pitch to keep the "core values" of the budget intact; cut here and there if you must, but don't lose sight of the goals. Vice President Biden got involved, too, meeting House Democrats for lunch and stopping by the Senate while he was in the building.

The White House may not be concerned enough to go public with pressure on Democrats yet, but liberal allies are. The Campaign for America's Future is organizing a "Dog the Dogs" campaign to call conservative Democrats and demand they side with Obama. Another group, Americans United for Change, is running TV ads targeting selected Democratic lawmakers. MoveOn.org is running radio ads with a similar goal. "It is our hope that Congress gets the boost it needs to stand up to the special interests that will do anything to maintain the failed policies of the last eight years," said Tom McMahon, the acting head of Americans United for Change.

So far, that effort may not be having the desired effect. "I think it's helping the media industry in Nebraska," Nelson told Salon Wednesday afternoon. "I never feel pressure from that kind of influence attempt. The only pressure I feel is pressure to do what's right, and pressure to reflect the values of people from Nebraska, not from Washington, D.C."

Still, Nelson and other moderates, like Sen. Mary Landrieu, D-La., were careful to minimize whatever differences they might have with the White House after hearing from Obama. "He's very realistic," Nelson said. "He has great expectations, but he doesn't have impossible expectations."

As for Republicans, they were already digging their heels in as hard as they could, as they have on most proposals out of the Obama White House. As one GOP leadership aide put it, it's not hard to figure out what the Republican message on any given day is: They'll be grousing that Obama wants to spend too much money. Late Wednesday afternoon, Judd Gregg -- the New Hampshire Republican who bailed on an offer to join the administration -- joined Senate GOP boss Mitch McConnell for another in what's becoming a never-ending series of press conferences whining about Obama's economic policies. "He intends to take this government hard left," Gregg said. At least Obama knows where they stand. As Wednesday's public show of affection for Senate Democrats proved, getting his own party to agree with his policies could take a lot more handholding over the next few weeks.