Earthlings, beware! It's a battle for world domination as Reese Witherspoon, Seth Rogen and Rainn Wilson lend their voices to this animated sendup of '50s creature features. 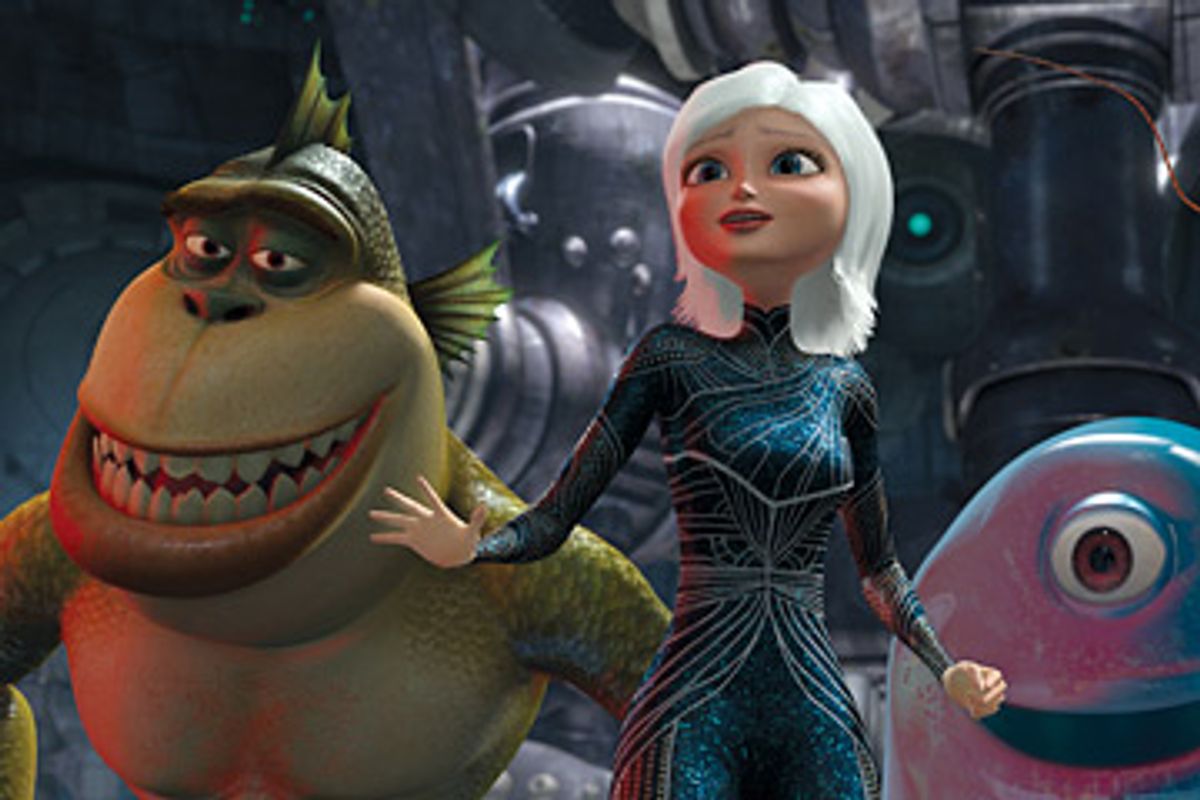 In Dreamworks' "Monsters vs. Aliens," Reese Witherspoon is the voice of a young woman, Susan, who's just about to be married to a smarmy TV weatherguy (Paul Rudd), when she's struck by a meteorite and, as she stands at the altar, suddenly grows to be 50 feet tall. The garter around her slender thigh goes sproing; her nice-girl brown bob turns platinum white. Her bridal gown doesn't completely pop off, but her sudden growth spurt turns it into a Wilma Flintstone-style mini. She's less a "monster" than a jumbo-size symbol of girl empowerment; the superhero outfit she'll later wear is a sleek jumpsuit that shows off every massive curve, not to mention a great set of stems. With a new name to go with her new size -- henceforth mousy little Susan shall be known as Ginormica -- she's cartoon proof that women can be sexy and powerful. As well as, of course, completely unsubtle.

The "Girls can do anything!" message of "Monsters vs. Aliens" is certainly harmless enough, although my problem with that slogan is that its very adamance gives too much credence to the opposite school of thought that suggests they can't (and as retorts go, it's about as potent as "Your mother wears Army boots"). Still, if little girls need to be told they can do anything, the feisty non-princess Ginormica is the woman to do it. But even with all those curves -- and even in 3D, as the picture is being shown in some theaters -- Ginormica is a disappointingly flat character. And she's a symbol of all the ways in which "Monsters vs. Aliens" -- directed by Rob Letterman and Conrad Vernon, whose credits include, respectively, "Shark Tale" and "Shrek 2" -- suffers from the curse of just trying too hard. There's little that's casual or loose about the picture, even though it works very hard at being fun, packing in the requisite number of inside jokes that will sail over kids' heads and make adults chuckle knowingly. (There's a hawkish general, voiced by Kiefer Sutherland, named W.R. Monger -- get it?) The long-standing Dreamworks vs. Pixar rivalry aside, "Monsters vs. Aliens" isn't, and isn't pretending to be, as ambitious a project as Pixar's almost universally lauded "Wall-E" was. But does it have to feel like something that's just rolled off a conveyor belt, made according to an exacting but dull set of specifications?

In "Monsters vs. Aliens" Ginormica is taken into military custody and imprisoned with a motley group of "monsters" the government has rounded up over the years, including an amphibian-gorilla hybrid named the Missing Link (Will Arnett), brainy scientist Dr. Cockroach Ph.D. (Hugh Laurie), who has the elegance of Alec Guinness and the head of a you-know-what, and B.O.B. (Seth Rogen), a shapeless one-eyed mass of goo who cheerfully admits to having no brain ("Turns out you don't need one!"). You'll recognize these characters as thinly disguised versions of '50s creature-feature staples -- as seen in the likes of "Attack of the 50-Foot Woman" (1958), "Creature From the Black Lagoon" (1954) and "The Blob" (1958) -- only here, they're rendered charming and cuddly, and yet have far less personality.

The military imagines it will come up with a use for these once-mighty creatures, and sure enough, when a four-eyed alien squidling named Gallaxhar (Rainn Wilson) shows up with a plan for world domination, Ginormica and her new pals are expected to save the day. Ginormica, her roundish head perched on an impossibly narrow neck, is a tough gal all right, even though she looks a little like a Blythe doll. But her plucky insistence that she can do anything began to grind me down very quickly.

And that was when Gallaxhar won my heart. "Monsters vs. Aliens" may not be much, but Gallaxhar is a marvel of animated-character design: His persona is so self-conscious that it transcends self-consciousness. With his bulbous forehead perched atop a tiny pot-bellied torso (he scuttles about on six wavy squid legs), he conjures memories of the TV fare that used to terrify me as a child, including the 1957 "Invasion of the Saucer Men," which I would watch, through parted fingers, on Saturday afternoons, and a "Twilight Zone" episode that I remember only vaguely -- and am not sure I want to revisit -- in which a gang of somber aliens with too-high foreheads try to persuade their captive Earthling to eat the plate of grub they've set before him. Gallaxhar is a composite of so many of my childhood anxieties that I couldn't help loving him, particularly when he counters Ginormica's "You go, girl!" chattering with a sharp reprimand: "Silence! Your voice is grating on my earnubs!" "Monsters vs. Aliens" is mild, harmless entertainment in every way. Except, in the end, the wrong side wins.