Would you buy a used car industry from this man?

The president will buy you a new muffler. He might not save G.M. and Chrysler unless they shape up. 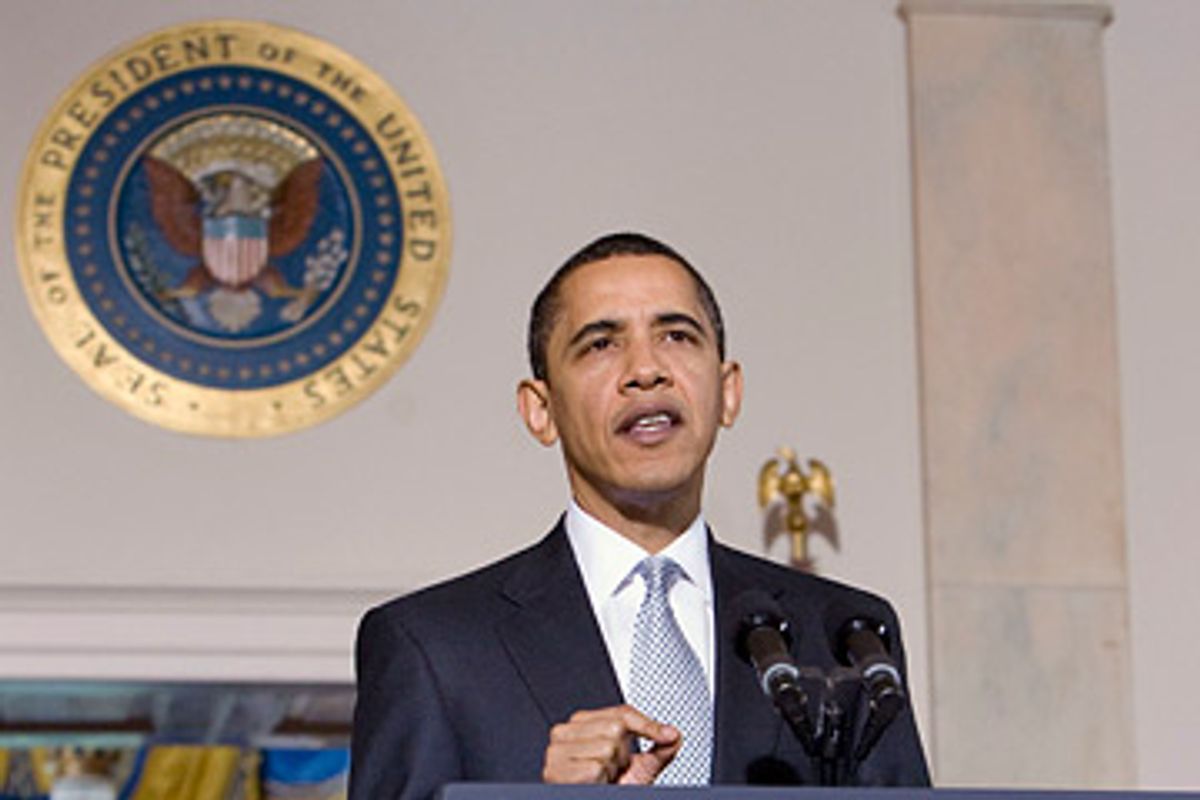 The idea, apparently, was to sound reassuring in the middle of a somber speech about the future of Chrysler and General Motors. "If you buy a car from Chrysler or General Motors, you will be able to get your car serviced and repaired, just like always," President Obama said, surrounded by his economic advisors in the White House foyer Monday morning. "Your warranty will be safe. In fact, it will be safer than it's ever been, because starting today, the United States government will stand behind your warranty."

But tucked into the middle of the administration's rollout of a new tough-love policy for U.S. automakers, the line may have had the effect of making Obama into a late-night infomercial pitchman. Any minute now, some enterprising local Chrysler or G.M. dealership will probably have new ads up on TV, featuring -- in addition to the 0 percent financing gimmicks that car dealers have been using to lure buyers lately, without much success -- footage of the president of the United States. The dealers have a brand-new selling point: all service contracts now backed by Uncle Sam! (Throw in free oil changes for life at federal buildings, and they might actually find some takers.)

As silver linings go, that was about all Detroit could hope to find in the White House announcement. G.M. canned its CEO, Rick Wagoner, in order to buy two more months of federal loans to keep itself in business, but still has to find a way to kill zombie brands like Hummer and get banks and other bond-holders to forgive billions of dollars in loans in order to convince the government to give it any more help in the future. Chrysler, the administration declared, was toast, unless the company could pull together the investment from Italian automaker Fiat that has been in the works for weeks. Even if the Fiat deal, which the White House threat may have spurred into reality, pans out, Obama aides haven't exactly sounded confident that the company is worth much more taxpayer cash. "Chrysler has zero cars, no cars that are recommended by Consumer Reports," a senior administration official told reporters Sunday night.

The message coming out of the White House was hard to miss: The free ride for companies that take billions of dollars of government bailouts is coming to an end. (In a sign of how seriously the administration is taking things now, Wagoner, who led G.M. since 2000, won't even actually leave the company; officials say he'll be kept on, in some harmless position, at his $1 annual salary, so taxpayers don't wind up on the hook for the multimillion-dollar pension he'd be entitled to otherwise.) "Year after year, decade after decade, we've seen problems papered over and tough choices kicked down the road, even as foreign competitors outpaced us," Obama said. "Well, we've reached the end of that road. And we, as a nation, cannot afford to shirk responsibility any longer. Now is the time to confront our problems head-on and do what's necessary to solve them."

The only problem, of course, is the contrast between the way the White House is handling Detroit this week, and the way the White House has been handling Wall Street for the last two months. Just a couple of days before Obama aides forced Wagoner to resign as G.M.'s boss, the president met with bank CEOs and pushed politely for them to cooperate with a much more expensive financial rescue plan. Not long before that, Obama and his aides had thrown their hands up in impotent, and belated, rage over the bonuses paid to departing AIG employees. Which makes it hard not to wonder if some of the new tough talk aimed at Detroit isn't actually aimed at voters, meant to make them think the administration realizes how upset people are with all the bailouts. (In such a climate, congressional Democrats from Michigan apparently decided any help was better than none at all, and issued a barrage of unquotable, content-free statements in reaction to Obama's speech rather than quibble over the details.)

"They're trying to demonstrate that they're not just handing money over, that they're trying to force some change," said one Democratic pollster. Even though Detroit is asking for far less money than Wall Street, and even though the auto industry employs far more middle-class workers than finance does, surveys show federal aid for banks and federal aid for Buicks are both unpopular. If anything, giving money to Detroit is even less popular than helping banks. "People believe that the auto industry has screwed itself," the pollster said, speaking on condition of anonymity because the future of the auto business could affect the political fate of some clients. "They have more experience with the auto industry than they do with these big investment banks. The public believes, rightly or wrongly, that American cars have gone downhill. The average voter's looking at this and saying, 'Wait, these guys are making a product I don't want to buy, and you want to take my tax money and give it to them so they can continue to make a product I don't want?'"

White House aides argued Monday that the administration isn't being any harder on the auto business than on the banks. Press secretary Robert Gibbs seemed to imply, though he warned not to read anything into it, that government assessments of banks' financial stability may not be much rosier than the assessments of G.M. or Chrysler's. "I think we've taken some tough measures" toward banks, Gibbs said, pointing out that Merrill Lynch and Wachovia were both allowed to vanish. But the demise of both of those banks was presided over by the Bush White House, not the Obama administration.

At least the White House could take solace knowing that Republicans couldn't muster a coherent attack. The GOP's Senate boss, Mitch McConnell, issued a statement ranting about the billions of dollars given to auto companies, but didn't quite come out in opposition to future aid, perhaps because he knows that if the Big Three fail, the suppliers that serve foreign automakers in Southern states may follow. Conservative bloggers grumbled about the administration's power to force Wagoner out, even though George Bush had done the same thing with AIG bosses when bailing out the insurance giant.

No matter what happens next, politically or policywise, it's hard to argue that administration officials don't realize what's at stake with the car companies. As Obama spoke, the White House driveway had become a little mini-memorial to Chrysler and G.M. Two Chevy Suburbans and a Chrysler Town and Country minivan with government plates were parked barely 100 yards from his podium. If the two once-proud Detroit behemoths go under, it won't be because the White House wasn't giving their products a shot.