Stop the Internet, I want to get off!

Constant e-mailing, Web surfing and online games were melting my brain. Then I found something that might actually save me from myself. 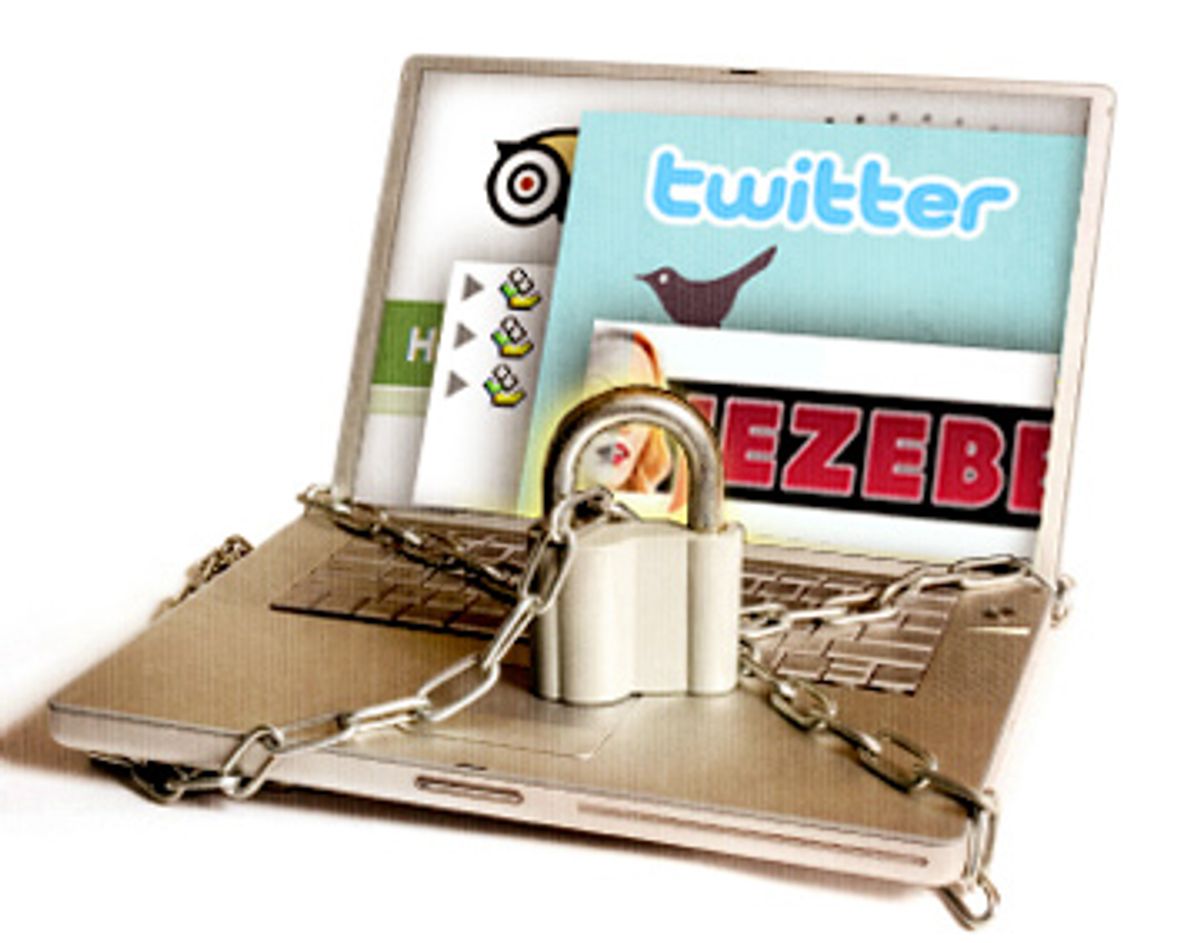 Last week, I downloaded a program that would protect me from myself. It's called Freedom.

Yes, Freedom. Like the word Mel Gibson's William Wallace shouts just as he's being disemboweled by a British executioner in "Braveheart." Freedom, like the thing that people around the world yearn for, fight for, die for. Freedom riders, freedom of assembly, freedom of the press, freedom of speech, freedom of expression. Freedom like "chimes of."

That's just like what I downloaded, except in my case, the Freedom I was seeking was meant not to liberate me from the oppressive bonds of an unjust regime. No, my Freedom was designed to bind and restrict me, to prevent me from e-mailing, surfing, browsing and playing online games. Ah ... sweet, sweet Freedom.

Look, I am not proud. But I bet I am not alone in my near frantic desire to be released -- for very brief periods, always with an escape hatch -- from the tyranny of my own wandering attention. I may not have known it, but for some time, I have wanted something forceful, computerized and beyond the realms of my own self-determination to come and muffle the beeping, buzzing, ringing, flashing distractions of our technological age so I can get some goddamn work done.

Enter Freedom, an application created by University of North Carolina-Chapel Hill Ph.D. candidate Fred Stutzman, who made it available to the public for free -- though he asks for donations -- a little over a year ago. In an e-mail, Stutzman writes that he came up with the idea after talking with lots of people trying to find places to work without Wi-Fi; he doesn't know how many people have downloaded it, but estimates the number at about 10,000. He has received 50 donations, all of which he's used to pay for software.

Freedom will disable the networking, only on a Mac computer, for periods of anywhere from one minute to eight hours. No Web sites, no e-mail, no instant messaging, no online shopping, no Facebook, no Twitter, no Jezebel, no iTunes store, no streaming anything. Once it is turned on, as it hilariously claims, "Freedom enforces freedom"; you cannot turn it off without rebooting your computer.

In these ever-connected times, the idea of a little self-imposed Freedom sounds like bird-chirping, brook-babbling peace.

And I don't even have the availability-fever as bad as some.

I do not use Twitter. I have only recently joined Facebook, to which I have not yet formed the addiction promised me by so many of my peers. I do not own an iPod. I am not one of those people who thumbs away at a BlackBerry during meals (those people should not be allowed to dine in public). I do not even own a BlackBerry, or an iPhone; my phone is so old that it does not take or receive photographs and can only hold up to 50 text messages at a time -- and also, the "7" button doesn't work.

And yet ... even as a comparative Luddite, I find myself bewitched, bewildered and deeply bothered by the number of minutes, hours, days I spend circling the online drain. As anyone who spends most working days staring at a computer screen knows, there is no such thing as sitting idle anymore. Those little desk toys they used to sell -- the plastic bird who teeters and totters until its beak finally dunks into the water glass -- are relics at this point. Like the notion of being unreachable at certain hours of the day or night, they are laughable reminders of a world long gone. Who would have the patience to wait for the beak to hit water? We'd all be hitting "reload."

Instead of watching plastic balances, we stare idly into a scrim of ever-updating images, words, videos, letter threads, some that calm us, some that raise our blood pressure, until finally the day is over, and we go home, log on, and do it again. Or at least I do.

For me, it's the hundreds of e-mails a day. And my professional listserv, which I try to compartmentalize, but which sometimes lures me into heated arguments. And the newspapers. And the blogs, only a couple of them, really -- but they update so often! And the notices about low, low fares that lead me on brief fantasy vacations via Tripadvisor.com and a host of hotel sites. And the word games. The true evil of Facebook, for me, comes not from the friending or virtual gifts or status updates, but from Word Twist, and Scramble, and Pathwords. What better way to while away the minutes (hours) while working on a story than by rearranging letters to form words. It's practically edifying! It's surely staving off dementia! Firing up my neurons in preparation for composition! It's weird that even as I'm falling asleep, the letters keep falling, forming and reforming in front of my eyes like Tetris in college! "Jagged"! "Debauched"! "Mandible"!

I needed to stop. I'd like a world in which I didn't check my e-mail for the last two hours of the evening, or on the weekends. On vacations, I'm very good at slapping up a "Nobody's Home" automatic message and disconnecting. But in daily life, it's not so easy. Professional communications (and expectations) now roll in on a 24-hour cycle, and as long as I'm at my computer, maybe I should just glance at Eater.com and see if there's anything interesting ...

I needed restriction, and not the kind my boyfriend offered when he suggested helpfully that he take the modem away. I didn't need a minder to ground me. I needed to ground myself.

That's when I stumbled across Freedom, somewhere I can't quite remember, but quite possibly in the bloggy public musings of other writers, like the New York Observer's Doree Shafrir, who recently Twittered to book blogger Maud Newton, "45 minutes of Freedom=844 words written. It's a miracle, I tell you!" to which Newton responded, "Mazeltov! Earlier I had 3 blissful Internet-free hours." Or perhaps from the Chronicle of Higher Education, which began its Feb. 2 piece on Freedom with the dry observation that, "In order to be free, the philosopher Jean-Jacques Rousseau claimed, humans must sometimes surrender a measure of freedom."

Indeed. And perhaps there is something poetically appealing about having the thing to which we surrender spring from the same structure that inhibits the freedom to begin with: I have downloaded the program so that I may be liberated from all the other programs I have downloaded.

The first time I turned on Freedom, I'll confess that I only put in for five minutes. Best to start slow, I figured, ease into the experience.

There was something about the process of submission that was like going under anesthetic. My five minutes began just as the ding of a new message entering my in box sounded. I could read the headline of the message but not the contents, and it said, "Your IM is freaking out on my computer." "Huh," I thought dreamily, as the connected world dissolved, "I wonder if it's freaking out because of the Freedom."

It didn't matter. I couldn't investigate until either my five minutes were up or I turned off my computer and rebooted, which probably would have taken almost as much time.

Next came a little phantom limb period, in which I indulged the urge to click on everything I had open, just to make sure it really was disabled.

Then, of course, in the brief poke around my in box and browser came the curiosity provoked by the moment of stopped time, in which I briefly became an anthropologist of myself: Who was I, and what had I been thinking of, just 38 seconds earlier? There, frozen in amber on my screen, was the clip of Amanda Terkel being hounded by Bill O'Reilly; Ben Schott's new Sniglet-y blog on the New York Times; a Web site about how to cure sinus headaches at home; the Feministing item about Gloria Steinem's birthday; an online shopping cart filled with three on-sale items from Anthropologie ($79.95) that I suspected I would never buy; the real estate listing for a 1,500-square-foot house in my neighborhood ($1.125 million) that I knew I would never buy; there was the phone number I needed to call to continue the investigation of whoever started using my bank card to buy gas in western Massachusetts last week; and, of course, my precious Pathwords game (current high score, 1,330). It was like a narcissism Rorschach: I am feminist, headachey, acquisitive, fantasy-driven, and completely word-game bedeviled.

Just like that, it was over. A little window appeared informing me that I had had my five minutes of Freedom, and asking if I'd like to donate to Fred Stutzman. No work completed. All I'd done was stare at my Internet navel for five minutes.

I'd need to take a breath and dive in for more. And that's when I wrote this sentence. And this one. All of the sentences so far, actually. Except for the few minutes during which I did call the bank to check on getting my money back from that guy who was using my credit card for gas. But that was actually kind of important, too. The kind of thing that might have been put off for another hour, or another day, if I had Webs to surf, words to unscramble.

It's been about a week with Freedom, and I like it, I really do, even if I'm a bit ashamed that I need it. I still use it mostly for about 15- or 30-minute periods.

I have gotten an immense amount of work done, and it has demonstrated, again and again, in ways that I've known intellectually but not viscerally, how Web-dependent I have become. And I'm not referring to connectivity simply as a time-waster or procrastination tool, but as a work resource. Where once I would have reached for dictionaries or thesauri, or written notes and references, I have found exactly how hungry -- and temporarily starved -- I've become for all the instant information I'm so used to having at my fingertips.

Yes, the whole thing makes me feel infantile and weak. Like a tween whose parents have put some kind of monitoring software on my computer; except in this case I am both tween and parent. But I'm not alone. In other corners of the Internet universe, people are turning to programs like RescueTime and MeeTimer to monitor, track and limit the time they spend on Twitter, and something called LeechBlock to prevent themselves from even going to certain sites for certain times of the day.

Has it come to this? To a point at which the Internet is so damn convenient that instead of dialing up and searching for Wi-Fi and complaining about slow connectivity I'm actually able to not only take it for granted but also see it as my jailer? Or my dealer? Must I give myself over to some computerized policeman or censor rather than simply revel in the abundance of online resources in my life and then turn them off when work -- or life -- calls?

As the first commenter on the Chronicle of Higher Education story about Freedom noted, "Let's take a word and use it to describe ... the opposite of what it means, thus eventually eliminating the opposite from the lexicon."

Then again, as the final commenter on the story noted with Gollum-like intensity, "ineed IT."

Apparently, so do I.