Isabella Rossellini gets it on with sea animals 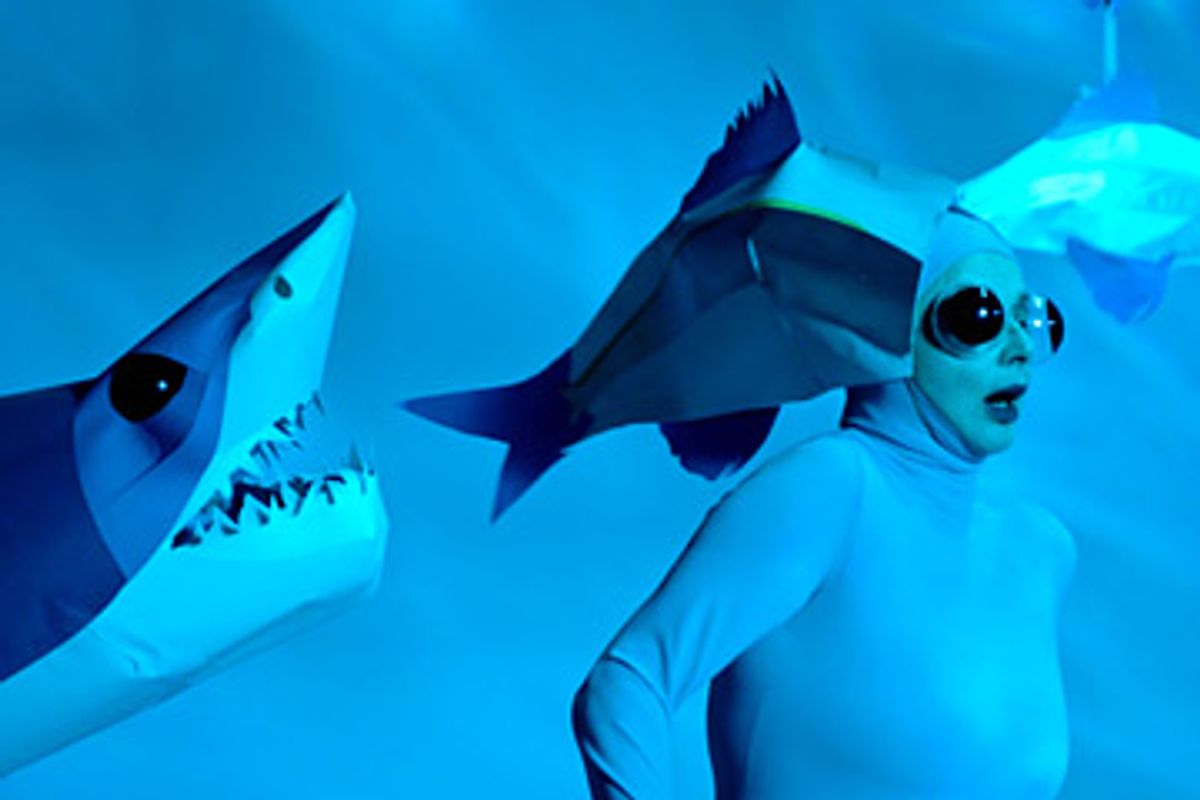 When Isabella Rossellini sees that we have a video camera, she calls for her makeup artist. It's just after lunch and she says, "I ate my lipstick," in her ambiguous but succulent accent, a remnant of her childhood in Italy and France with her cinematically celebrated parents, director Roberto Rossellini and actress Ingrid Bergman. We're used to seeing Rossellini looking flawlessly glamorous in her movies (and as the face of Lancôme cosmetics for 14 years). But, recently, the actress has taken to wearing strange and unconventional disguises: a snail, an earthworm and a spider, among others.

She donned these costumes for "Green Porno," an endearingly oddball series of short, educational films made for the Sundance Channel. The first season, about the sex lives of bugs, premiered last year. Created, written and acted by Rossellini, the two-minute movies were designed to be viewed on computers, cellphones and MP3 players. In each episode, Rossellini dressed up as one of those tiny insects, giving viewers a human-size look at the animal kingdom's hidden sexual dramas. With a commitment to anatomical accuracy and utmost sincerity, Rossellini played opposite giant paper cutouts, which served as inanimate partners for her vigorous copulation. On April 1, the series begins its second season, this time focusing on the sexual habits of marine animals. Rossellini talked to us about her unintentional male-animal fetish and the naughty side of nature.

How did you come up with the idea for the series?

Robert Redford [founder of the Sundance Film Festival] came up with the idea that the Internet might offer the opportunity to relaunch the short film series format, which had disappeared. The other thing is that Sundance is very interested in the environment. I’d just worked with them on a project called "My Dad Is 100 Years Old," that I wrote about my father, Roberto Rossellini, and they offered me the opportunity to do these short films about the environment.

How did you end up deciding on marine animals for this season?

The first series I did on animals that I knew, that were in my garden and I had studied --  I could just lift a stone and find my earthworms. I wanted animals that everybody knew. We did the same for the sea creatures with the starfish and barnacle and clams, everything that people know. And the third series that comes out in the fall is again about fish, but this time it's called "Bon Appetit Green Porno." It is about animals we eat,  but again it has sea animals, because I found an incredible accomplice in a marine biologist called Claudio Campagna. I get the information from  books, but then to verify that I really understood it -- when we do the costume, is it plausible that he has antennae like this? -- it's nice to have a real scientist collaborating.

You played male creatures in most of the first season, or a hermaphrodite, and you stuck with that this time around. Why?

You know, sometimes I play male because they move more. Like the spider, the female is four, five times bigger than the male and she just sits there on her spider web and it's the male who has to walk and approach her.  So, I never really thought, "Oh, I’m playing male" -- I was already playing spider. But after that people say, "You notice that you’re always playing male?" "Oh," I say, "really? I played hermaphrodites too. I played female, I played the queen bee." I think it’s more dictated by the costume. This series the costumes are sometimes 6 feet tall, 9 feet tall, you know, 10 feet tall!

The series is intended for online viewing or cellphones. What can you do online that you can't do on TV or film? Is it a more flexible medium, or is it just cheaper?

The fact that it was mostly going to be seen on a small, mobile screen made me feel that it gave it this cartoonish look, four or five colors per film. So we have the background that is one color, and then I am the animal and I might have two or three colors, very contrasted. Because we saw that when you look at animation it looks very good on film, on television, and on a mobile. But if you see "Lawrence of Arabia," you know, already on television you miss half of the film and if you see it on mobile, forget it, better not watch it. So that dictated the look of it: strong, vivid colors, simplicity in the art direction.

Have you ever wanted to do an animal whose sexual behavior was deemed too raunchy for the series?

No! I mean, there's no censorship, you know, and I think that my commitment is to tell it as it is, the way it is in nature, and nature is infinitely scandalous.

Listen to the conversation here.