Roundup: Movies not to miss

Two men in a taxi face life and death in Ramin Bahrani's gorgeous "Goodbye Solo" -- and then there's the "Citizen Kane" of yurt movies! 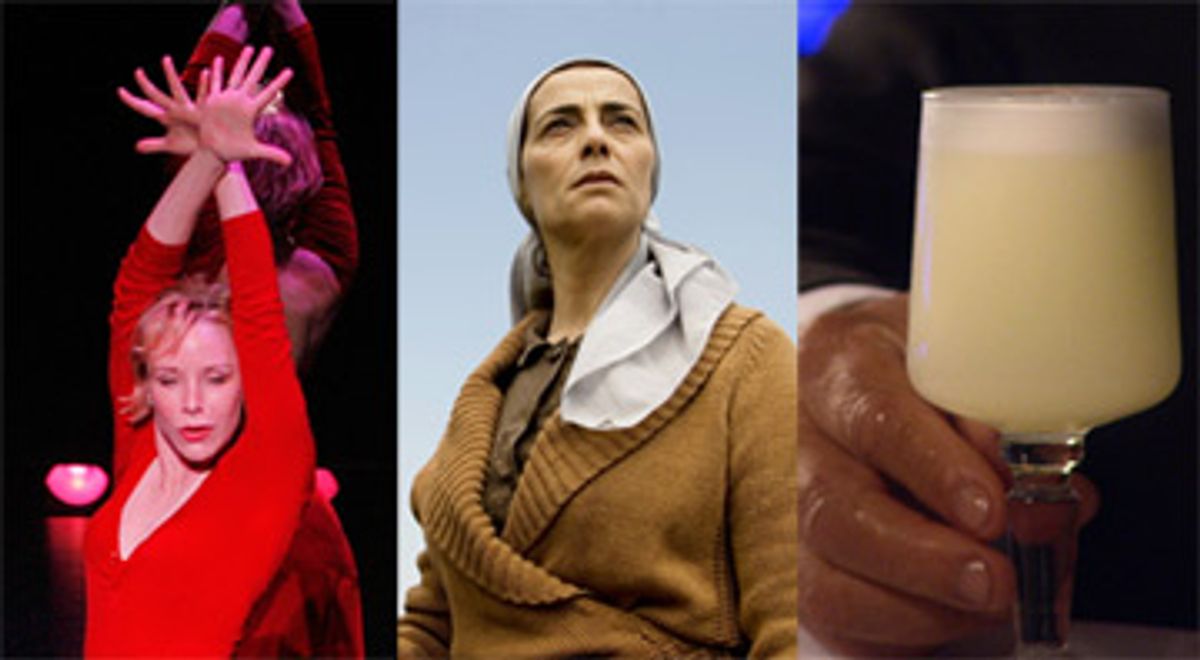 I've been away almost two weeks on family-related leave. Nothing too serious, thank goodness, and Mrs. Jean C. Kauffman of Midlothian, Va. -- that would be my beloved mother-in-law -- is doing just fine. Thanks to repeat viewings of the Meryl Streep-narrated film about evolution at the American Museum of Natural History (in the company of two mesmerized 5-year-olds) I now know much more about our fishy ancestors than I did before.

I can't hope to cover all the independent films that were released in my absence, but here are ultra-quick takes on three terrific low-budget dramas. Each is eminently worth catching on its own and taken together they offer a theme, sort of. Two of them, in fact, offer extensive scenes of livestock animals being born, in thrilling and disgusting detail. Beyond the barnyard, these films stretching from North Carolina to the rural Czech Republic to the steppes of Kazakhstan reflect a desire to break through the surface of contemporary metropolitan-electronic civilization and discover what lies on the other side. Given what appears to be the abrupt implosion of the aforementioned civilization, these are physical and metaphorical journeys we all need to make.

"Goodbye Solo" Two men in a cab, at night. The driver is black, the passenger white. The camera captures them in intimate closeup, and the atmosphere between them is tense with ambiguous electricity. The driver is chatty, cheerful, perhaps a little overly friendly. The chain-smoking passenger, with a downcast expression and a face that looks like 20 miles of bad backwoods dirt road, says almost nothing. From that archetypal scenario comes the remarkable new film from Ramin Bahrani, a young American director of tremendous accomplishment and vision.

Bahrani's first two features, "Man Push Cart" and the exquisite "Chop Shop," were neorealist fables set on the polyglot streets of New York. But in turning his focus this time to Winston-Salem, N.C., he isn't engaged in heartland anthropology. Bahrani's parents are from Iran (and he himself studied film there), but he was born and raised in Winston-Salem, and part of this film's agenda is to capture how a historic Southern city like that could be home to someone like him.

Solo (Souléymane Sy Savané), the eponymous taxi driver, is a Senegalese immigrant married to a Mexican immigrant, who speaks in a sometimes-hilarious blend of African lilt and hiphop street slang. Pretty much every time he addresses William (Red West), his laconic good ol' boy passenger, as "big dog," it's still funny. The two actors' stories are at least as remarkable as the characters': Savané is a onetime fashion model and African TV star, while West was a member of Elvis Presley's so-called Memphis Mafia who appeared with the King in "Viva Las Vegas" and has specialized in tough-guy bit parts for 50 years.

Both Solo and William are shielding something from each other, one of them obviously and the other less so. William is old, alone and clearly depressed; when he offers Solo $1,000 to drive him, a few weeks hence, to a mountainous overlook called Blowing Rock, a tenuous friendship is born. But Solo divines correctly that William is contemplating suicide, and of course feels he has to intervene. (I suspect that the plot parallels with Iranian director Abbas Kiarostami's masterpiece "A Taste of Cherry" are not accidental.) But Solo is not entirely the unsinkable, up-tempo personality suggested by his endless chatter about his future as a flight attendant or his love for big-booty women. If "Goodbye Solo" revolves around unanswered questions, like what drove William to this desperate state, or why Solo becomes so attached to this volatile old sourpuss, Bahrani declines to offer definitive answers.

Bahrani and his cinematographer, Michael Simmonds, find impressive visual poetry in the battered back streets and barrooms of Winston-Salem, and then in the almost spiritual explosion that follows when the film leaves the city for the spectacular autumnal landscape of Blowing Rock. But most of the movie's subterranean emotion is found in the unsettled relationship between Solo and William, and in the extraordinary performances by the two leading men. Where so many indie directors rely on improvised or semi-improvised dialogue, Bahrani scripts, blocks and exhaustively rehearses every scene. The difference is instructive. At first, Solo plays the genial host, inviting William to crash on his wife's sofa out of an apparently generous impulse. This doesn't go well, and before long the relationship is reversed and Solo is sleeping in William's motel room, having ditched his wife and teenage stepdaughter for reasons that remain murky.

In some ways "Goodbye Solo" is a more accomplished and ambitious work than "Chop Shop," but I think the earlier movie remains Bahrani's best film. While Bahrani and co-writer Bahareh Azimi steer clear of redemptive clichés and over-explication -- this isn't "Driving Miss Daisy," or even "The Visitor" -- there seems to be a symbolic or programmatic agenda here that never quite meshes with the personal, psychological and spiritual drama between William and Solo. I get that for Bahrani, Solo is the face of the New South, and William a part of the tragic old order that's passing away; and that they represent different cultural approaches to the problems posed by old age and death. But that's not nearly as interesting as the story of two wounded men alone in a cab, struggling to communicate. (Now playing in New York and Chicago. Opens April 3 in Madison, Wis.; April 10 in Los Angeles; April 17 in Boston and San Francisco; April 24 in San Diego; April 29 in Seattle; May 1 in Minneapolis; May 8 in Baltimore, Philadelphia, Washington, Charlotte, N.C., and Austin, Texas; and May 15 in Atlanta, Memphis, Portland, Ore., and St. Louis, with other cities to follow.) "Tulpan" At this point there's an entire micro-genre of movies made in and around the former Soviet Union that document the long, slow decline of the nomadic sheepherding lifestyle on the steppes of Central Asia. This needs a name, and I've got one: Yurt Cinema. (Two recent examples: "Khadak" and "Tuya's Marriage." Give me half an hour on Google and IMDB, and I'll dig up some more.) I'm obviously doing Russian-Kazakh documentarian Sergey Dvortsevoy no favors in telling you that his gorgeous and subtle narrative feature debut is Yurt Cinema, so let's shoot for an ad-copy quote: "Tulpan," which won the Certain Regard prize at Cannes last year, is the "Citizen Kane" of Yurt Cinema!

OK, that's kind of lazy. It's actually more like the "It Happened One Night" mixed with the "Waiting for Godot" of Yurt Cinema, which gives you an idea of the film's wildness and range. Asa (Askhat Kuchinchirekov), a likable, jugheaded dreamer, has come home to live with his sister's family after serving in the Russian navy. He has aspirations to own a Western-style ranch, complete with satellite TV and an actual house, on the pavement-flat, nearly featureless steppes 300 miles outside Almaty, the Kazakh capital. But the local sheepherding boss won't give him a flock of his own until he gets married, and the only marriageable young woman for miles in any direction is a legendary beauty named Tulpan, whose parents have higher targets than Asa in mind.

You might think you know where "Tulpan" is going based on that description. You would be wrong. Dvortsevoy supplies lots of loosey-goosey domestic comedy around hapless Asa's unhappy relationship with his grumpy brother-in-law (Ondasyn Besikbasov), and a regular infusion of madcap energy by way of Asa's best friend (Tulepbergen Baisakalov), who comes as close as you can get to a party animal on the steppes of Kazakhstan. In practice, this means his tractor is supplied with impressive amounts of pornography and an endlessly looping tape of "Rivers of Babylon." But if Asa's yearning for Tulpan keeps him going in this unremitting landscape of wind and sand, where his family's lambs are dying of unknown causes at an alarming rate, Tulpan herself is a chimera, much talked about but never seen.

If anything, Dvortsevoy is using his appealing nonprofessional cast, and the possibility of a successful romantic conclusion, to package an extraordinarily photographed handheld docudrama about a way of life that is none too slowly vanishing. What makes "Tulpan" remarkable are the extended unbroken scenes, both dramatic and comic. We watch not one but two lengthy struggles with a suffering ewe as she gives birth, followed by frantic efforts to make the half-strangled lamb breathe on its own. We also watch Asa's niece sitting all alone on the steppe, on the leeward side of the family yurt, singing a Kazakh song into the wind, or his nephew reciting propaganda bulletins he has memorized off shortwave radio. Whether Asa gets the girl or not simply isn't important. (Now playing at Film Forum in New York. Opens April 24 in Los Angeles; May 1 in Nashville; May 8 in New Orleans and San Francisco; May 15 in Boston and Washington; June 5 in Atlanta; June 12 in Chicago, Kansas City, Mo., and Santa Fe, N.M.; June 16 in Hartford, Conn.; and June 26 in Lincoln, Neb., and Seattle, with more cities to follow.)

"The Country Teacher" This lovely, drily comic and often surprising drama from Czech writer-director Bohdan Sláma begins moving in one direction -- the guy from the big city who finds love and fulfillment in rural life -- and then shifts lanes. It's a movie that demonstrates, if you'll pardon the sports metaphor, how deep the bench is in Eastern European film. Admittedly the Czech Republic is a special place, with a long history of challenging and independent-minded cinema along with a tremendous acting tradition, both of which are on display here.

Well, see, that's all before the teacher comes out to his mother, on a return visit to Prague, and a good while before it becomes clear that his sexual fascination is focused, with "Death in Venice" intensity, on Marie's teenage son (Ladislav Sedivý), a lovely, brooding youth who seems indifferent to the world outside video games. Then there's the teacher's bisexual Eurotrash ex-boyfriend (Marek Daniel), who shows up in the village with a convertible, some excellent weed and a yearning for chaos. "The Country Teacher" is neither a story of rural homophobia or of gay liberation; those are minor ingredients at best. Instead, it's a vividly drawn comedy about a man who learns, bit by bit, how to be more at ease in his own skin (and also how to pull a calf out of a heifer with rope). (Now playing at the Quad Cinema and Lincoln Plaza in New York. Opens May 22 in Boston, with other cities and DVD release to follow.)