It's got hot rods, hot women and Vin Diesel. But can this fourth installment in the action franchise capture the cheap thrills of the original? 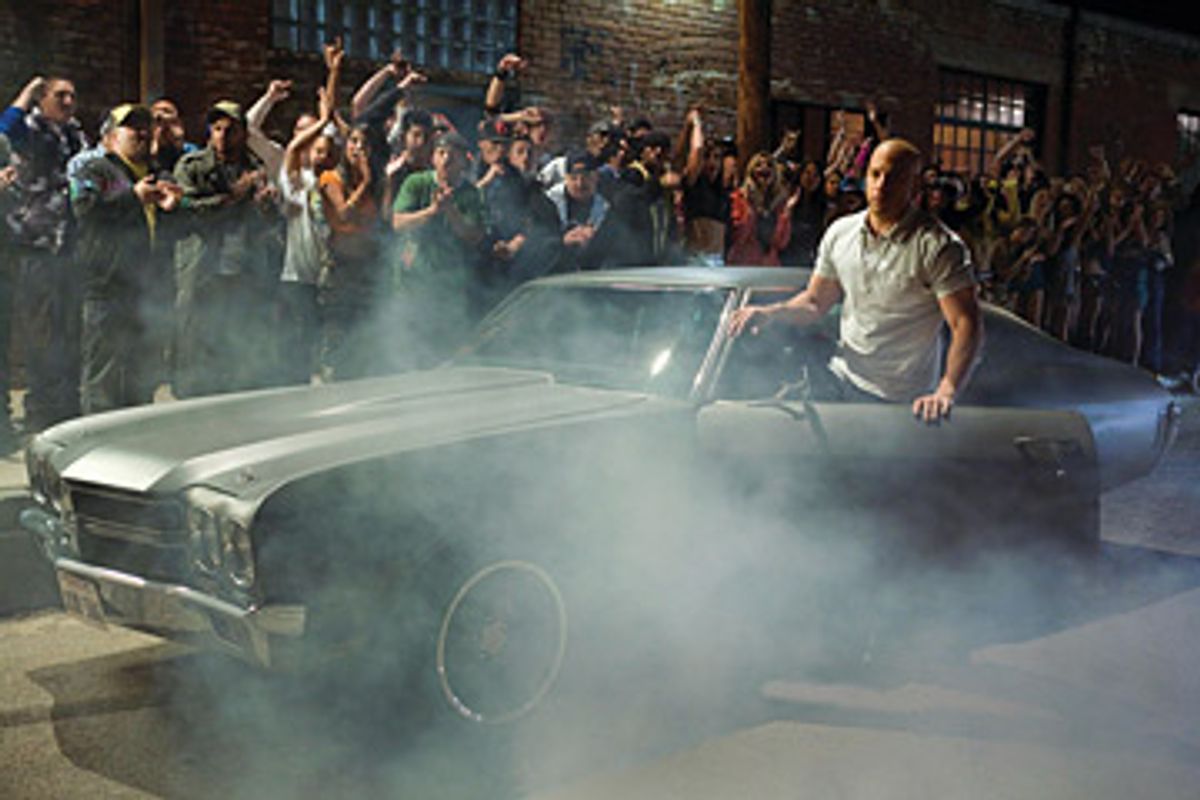 Even in the context of a Hollywood that repackages the same movies over and over again but with different names and (slightly) varied characters and stories, Justin Lin's sequel to a sequel to a sequel "Fast & Furious" seems especially cheap and lowdown. It's like an imitation Hot Wheels that comes in the same kind of blister pack as the original and features lettering in approximately the same typeface, only it's called Fast Wheels, and it's the thing your clueless-if-well-meaning parents come home with when what you want with all your heart is the real thing.

"Fast Wheels" -- I mean, "Fast & Furious" -- is an attempt to repackage the glory of the picture that started it all, Rob Cohen's "The Fast and the Furious," which itself was a concoction borrowed from the tradition of cheapie fast-car movies from the '50s and '60s. (It even boosted its title from a 1955 Roger Corman picture, although it wasn't a remake.) "The Fast and the Furious" was sheer B-movie pleasure, featuring one effortlessly appealing actor (Vin Diesel), one dull but more or less good-looking one (Paul Walker) and lots of car-on-car action, shot cleanly and in a way that was both thrilling and served the plot. You can't say the same for the sequels that followed, which merely tried to siphon gas out of the original's tank: First there was the John Singleton-directed "2 Fast 2 Furious"; then came Lin's "The Fast and the Furious: Tokyo Drift." Neither had as much zip, or as much charm, as the original.

"Fast & Furious" tries to recapture elements of what made the first movie work so well: It brings back much of the original cast, including Diesel (as principled bad-boy Dom Toretto) and Walker (as Brian O'Conner, formerly an undercover cop and now a suit-wearing FBI guy), as well as Michelle Rodriguez, as Dom's girlfriend, Letty, and Jordana Brewster as his sister, Mia, Brian's love interest in the first movie.

But "Fast & Furious" proves that it's just not enough to bring back the actors who made the first movie in a franchise hit; you also have to give them something to do. And Lin and screenwriter Chris Morgan (who also wrote "Tokyo Drift") give them nothing to cling to. Some would argue that you don't go to a movie like "Fast & Furious" looking for a plot, although "The Fast and the Furious" actually had one, complete with well-thought-out twists and a satisfying resolution. In "Fast & Furious," Brian and Dom are merely thrown together to catch a heroin kingpin who's been smuggling his product from Mexico. Dom has personal reasons for wanting to catch the guy; Brian's motives are professional. The two have a few scenes in which they circle each other warily before, inevitably, rebonding.

Diesel, as always, has some charm: He's the kind of cueball lug that guys can admire for his coolness and that women wouldn't mind cuddling up to, and here he delivers even the lamest dialogue with just a hint of a wink -- he's clearly trying to have fun, hoping we will, too. Walker, on the other hand, is a lost cause. He has appeared in plenty of movies since "The Fast and the Furious" -- including "2 Fast 2 Furious" and the Disney sled-dog drama "Eight Below" -- and still hasn't managed to grow a personality. With the exception of one brief scene, in which he gets to choose the car he'll be driving in the line of duty (with the mischievous greediness of a little kid, he wants them all), he has all the charisma of a potted plant.

Lin doesn't seem to care at all about the story he's telling: He just wants to make the action fast and exciting, which would be a noble enough achievement if he could actually pull it off. But there's no sense of movement or rhythm in "Fast & Furious" -- just lots of choppy cutting, which isn't the same thing. Obviously, the chief attraction in a movie like this one is the driving. But Lin doesn't let us revel in the speed of the vehicles, or feel the adrenaline buzz that's coursing through their drivers; instead he scissors the action into incoherent shreds -- it's almost impossible to tell where one car is in relation to another at any given moment. There's some stunt driving in "Fast & Furious," including a few jumps and some pleasingly aggressive sideswiping, but much of the driving either looks, or is, computer-generated -- the effect is a simulated experience instead of a visceral one. Even in what should be the movie's most dazzling sequence -- in which cars race through a tunnel, carved through a mountain range, that connects Mexico and the United States -- the action feels sterile and canned, the equivalent of "telling" instead of "showing." "Fast & Furious" spends a lot of time advertising how exciting it is, without actually being exciting. There's only one "The Fast and the Furious." Beware of imitations, no matter how much the packaging tries to fool you.