One of the country's most reverent Obama admirers vehemently objects to the Obama DOJ's use of radical Bush/Cheney weapons. 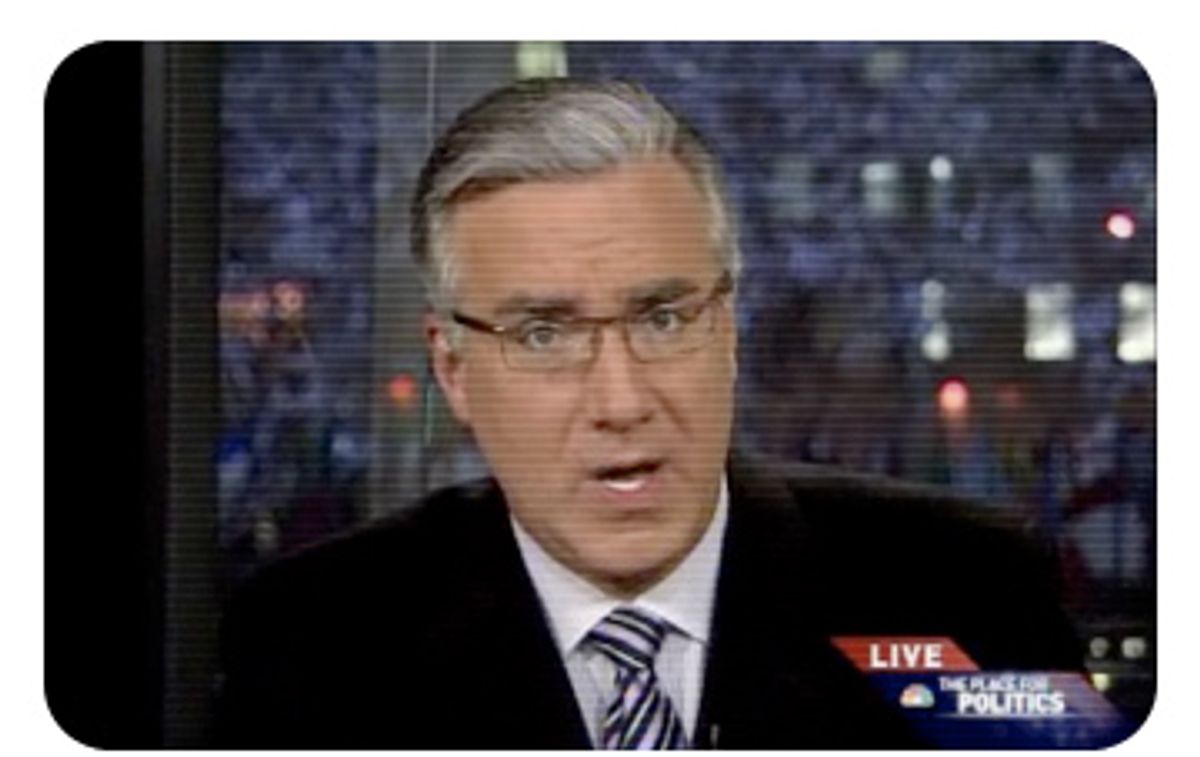 Several weeks ago, I noted that unlike the Right -- which turned itself into a virtual cult of uncritical reverence for George W. Bush especially during the first several years of his administration -- large numbers of Bush critics have been admirably willing to criticize Obama when he embraces the very policies that prompted so much anger and controversy during the Bush years.  Last night, Keith Olbermann -- who has undoubtedly been one of the most swooning and often-uncritical admirers of Barack Obama of anyone in the country (behavior for which I rather harshly criticized him in the past) -- devoted the first two segments of his show to emphatically lambasting Obama and Eric Holder's DOJ for the story I wrote about on Monday:  namely, the Obama administration's use of the radical Bush/Cheney state secrets doctrine and -- worse still -- a brand new claim of "sovereign immunity" to insist that courts lack the authority to decide whether the Bush administration broke the law in illegally spying on Americans.

The fact that Keith Olbermann, an intense Obama supporter, spent the first ten minutes of his show attacking Obama for replicating (and, in this instance, actually surpassing) some of the worst Bush/Cheney abuses of executive power and secrecy claims reflects just how extreme is the conduct of the Obama DOJ here.  Just as revealingly, the top recommended Kos diary today (voted by the compulsively pro-Obama Kos readership) is one devoted to attacking Obama for his embrace of Bush/Cheney secrecy and immunity doctrines.  Also, a front page Daily Kos post yesterday by McJoan vehemently criticizing Obama (and quoting my criticisms at length) sparked near universal condemnation of Obama in the hundreds of comments that followed.  Additionally, my post on Monday spawned vehement objections to what Obama is doing in this area from the largest tech/privacy sites, such as Boing Boing and Slashdot.

This is quite encouraging but should not be surprising.  As much as anything else, what fueled the extreme hostility towards the Bush/Cheney administration were their imperious and radical efforts to place themselves behind an impenetrable wall of secrecy and above and beyond the rule of law.  It would require a virtually pathological level of tribal loyalty and monumental intellectual dishonesty not to object just as vehemently as we watch the Obama DOJ repeatedly invoke these very same theories and, in this instance, actually invent a new one that not even the Bush administration espoused.

To be clear:  there are important areas in which Obama has been quite commendable, and I've personally praised him fairly lavishly for those actions (see, for instance, here, here and here), but it is simply unacceptable -- no matter what else is true about him -- for Obama to claim for himself the very legal immunity and secrecy powers which characterized and enabled the worst excesses of Bush lawlessness.  Yet in a short period of time, he has taken one step after the next to do exactly that.

The Olbermann segments, which are really worth watching, highlight the exact passages of the Obama DOJ's brief which I excerpted and posted on Monday, and underscore how intolerable the Obama administration's conduct in the area of transparency and civil liberties has increasingly become.  Credit to Olbermann for highlighting this issue and commenting on it with such unrestrained candor.  This should help galvanize greater action to make clear to the Obama administration that this conduct is completely unacceptable, and -- with Accountability Now, FDL and others -- I expect there to be some specific actions announced very shortly to begin pushing back, hard, against these serious transgressions:

UPDATE:  Even better, Olbermann tonight will have on as a guest Kevin Bankston of EFF, the lead counsel for the plaintiffs suing Bush officials for illegal spying, which means Olbermann intends to cover this issue again tonight.  Along with the ACLU and others, EFF has been truly heroic in defending the core constitutional liberties of Americans and serving as a key check on executive abuses.  As I noted in Monday's post, this is what Bankston said on Monday after reading the Obama DOJ brief:

President Obama promised the American people a new era of transparency, accountability, and respect for civil liberties. But with the Obama Justice Department continuing the Bush administration's cover-up of the National Security Agency's dragnet surveillance of millions of Americans, and insisting that the much-publicized warrantless wiretapping program is still a "secret" that cannot be reviewed by the courts, it feels like deja vu all over again.

Serious credit to Olbermann for putting on Bankston tonight and thus continuing his coverage of this story, despite knowing that hordes of truly creepy Obama worshipers (see here -- post and comments) who spent the last several years venerating Olbermann (and people like Jonathan Turley) will now suddenly declare that they are untrustworthy, unreliable, hysterical hacks, etc. etc. -- all for saying exactly what they were saying in 2006 and 2007, but this time applying it to Obama rather than Bush.

UPDATE II:  One of Obama's most supportive boosters in the liberal blogosphere -- Booman -- emphatically condemns Obama for what his DOJ is doing in this case, and says "it is extremely disappointing, it is unjustifiable, and it is dangerous."

Different people are going to have different views about how vigorously Obama should be criticized, how early that criticism should begin, how much benefit of the doubt he should be accorded, etc.  That's all reasonable.  Moreover, Obama is going to be better in some areas than others, so one's views of his presidency may very well be shaped by the areas on which one focuses most.  Progressives who focus most on domestic budget policy are likely to have a more favorable view than those who focus on civil liberties, executive power abuses, the rule of law and the like.  That, too, is perfectly reasonable.

But where -- as here -- Obama embraces the very same extremist secrecy and immunity powers which provoked such intense criticism when Bush claimed those powers, any minimally honest person will react how Booman did.  It is simply impossible for X to have been a hallmark of lawless tyranny when Bush did it but an understandable or tolerable action (or, worse, a routine fulfillment of one's duties) when Obama does it.

UPDATE III:  Yesterday, I posted an interview I did with Clive Stafford Smith, the lawyer for numerous Guantanamo detainees, including Binyam Mohamed, who is involved in a rather amazing dispute with the Pentagon.  The transcript for that interview is now available here.