The president needs to stop shielding financial executives from the pitchfork-wielding public. 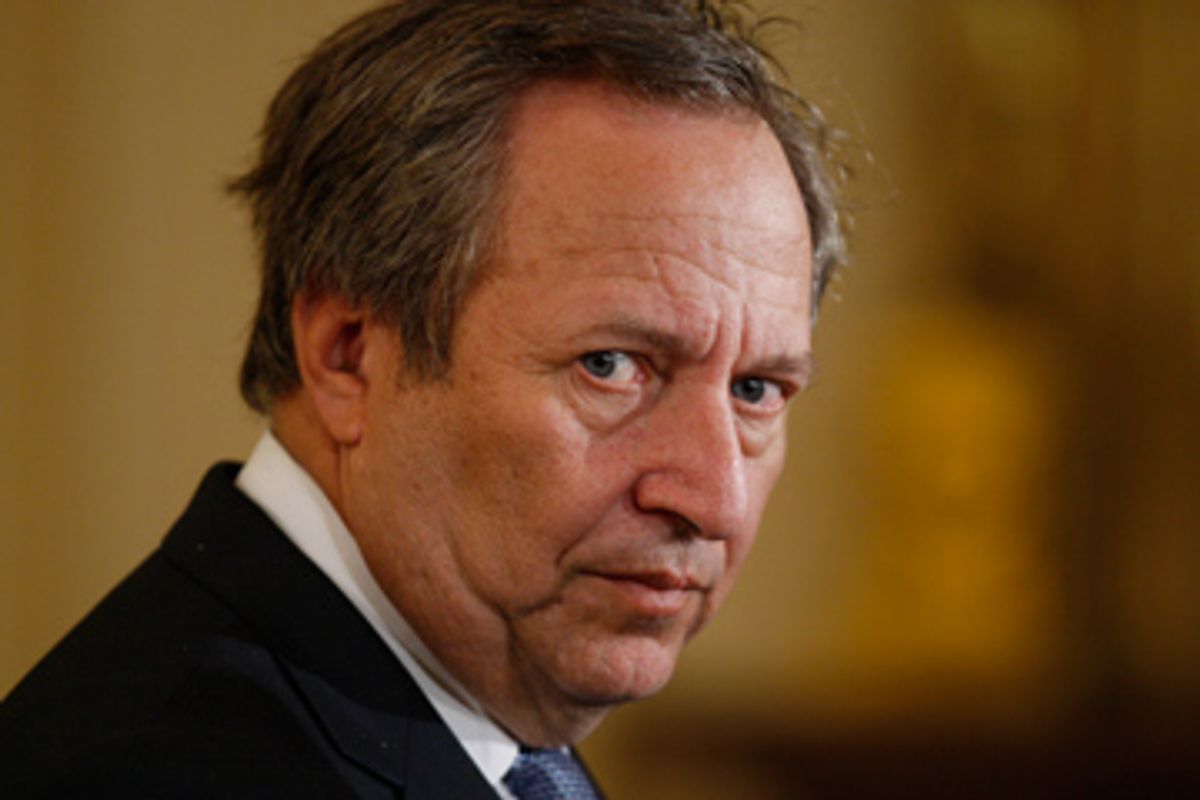 A cartoon in the Sunday comics shows that mustachioed fellow with monocle and  top hat from the Monopoly game -- "Rich Uncle Pennybags," he used to be called -- standing along the roadside, destitute, holding a sign: "Will blame poor people for food."

Time to move the blame to where it really belongs. That means no more coddling banks with bailout billions marked "secret." No more allowing their executives lavish bonuses and new corporate jets as if they've won the megalottery and not sent the economy down the tubes. And no more apostles of Wall Street calling the shots.

Which brings us to Larry Summers. Over the weekend, the White House released financial disclosure reports revealing that Summers, director of the National Economic Council, received $5.2 million last year working for a $30 billion hedge fund. He made another $2.7 million in lecture fees, including cash from such recent beneficiaries of taxpayer generosity as Citigroup, J.P. Morgan and Goldman Sachs. The now defunct financial services giant Lehman Brothers handsomely purchased his pearls of wisdom, too.

Reading stories about Summers and Wall Street you realize the man was intoxicated by the exotic witches' brew of derivatives and other financial legerdemain that got us into such a fine mess in the first place. Yet here he is, serving as gatekeeper of the information and analysis going to President Obama on the current collapse.

We have to wonder, when the president asks, "Larry, who did this to us?" is Summers going to name names of old friends and benefactors? Knowing he most likely will be looking for his old desk back once he leaves the White House, is he going to be tough on the very system of lucrative largesse that he helped create in his earlier incarnation as a deregulating treasury secretary? ("Larry?" "Yes, Mr. President?" "Who the hell recommended repealing the Glass-Steagall Act back in the '90s and opened the floodgates to all this greed?" "Uh, excuse me, Mr. President, I think Bob Rubin's calling me.")

That imaginary conversation came to mind last week as we watched President Obama's joint press conference with British Prime Minister Gordon Brown. When a reporter asked Obama who's to blame for the financial crisis, our usually eloquent and knowledgeable president responded with a rambling and ineffectual answer. With Larry Summers guarding his in box, it's hardly surprising he's not getting the whole story.

If only someone with nothing to lose would remind the president of that old story -- perhaps apocryphal but containing a powerful truth -- of the Great Wall of China. Four thousand miles long and 25 feet tall. Intended to be too high to climb over, too thick to break through, and too long to go around. Yet in the first century of the wall's existence, China was successfully breached three times by invaders who didn't have to break through, climb over or go around. They simply were waved through the gates by obliging watchmen. The Chinese knew their wall very well. It was the gatekeepers they didn't know.

Shifting the blame for the financial crisis to where it belongs also means no more playacting in round after round of congressional hearings devoted more to posturing and false contrition than to truth. We need real hearings, conducted by experienced and fiercely independent counsel asking the tough questions, or an official commission with subpoena power that can generate evidence leading, if warranted, to trials and convictions -- and this time Rich Uncle Pennybags shouldn't have safely tucked away in his vest pocket a "Get Out of Jail Free" card.

So far, the only one in the clink is Bernie Madoff and he was "a piker" compared to the bankers who peddled toxic assets like unverified "liars' loan" mortgages as Triple-A quality goods. So says Bill Black, and he should know. During the savings and loan scandal in the 1980s, Black, who teaches economics and law at the University of Missouri, Kansas City, was the federal regulator who accused then-House Speaker Jim Wright and five U.S. senators, including John Glenn and John McCain, of doing favors for the S&Ls in exchange for campaign contributions and other perks. They got off with a wrist slap but Black and others successfully led investigations that resulted in convictions and reregulation of the savings and loan industry.

Bill Black wrote a book about his experiences with a title that fits today as well as it did when he published it four years ago -- "The Best Way to Rob a Bank Is to Own One." On last Friday night's edition of "Bill Moyers Journal," he said the current economic and financial meltdown is driven by fraud and banks that got away with it, in part, because of government deregulation under prior Republican and Democratic administrations.

"Now we know what happens when you destroy regulation," Black said. "You get the biggest financial calamity for anybody under the age of 80."

What's more, the government ignored warnings and existing legislation to stop it before the current crisis got worse. "They didn't even begin to investigate the major lenders until the market had actually collapsed, which is completely contrary to what we did successfully in the savings and loan crisis," Black said. "Even while the institutions were reporting they were the most profitable savings and loans in America, we knew they were frauds. And we were moving to close them down."

There was advance warning of the current collapse. Black says that the FBI blew the whistle. In September 2004, "there was an epidemic of mortgage fraud, that if it was allowed to continue it would produce a crisis at least as large as the savings and loan debacle."

But after 9/11, "The Justice Department transfers 500 white-collar specialists in the FBI to national terrorism. Well, we can all understand that. But then, the Bush administration refused to replace the missing 500 agents." So today, despite a crisis a hundred times worse than the savings and loan scandal, "there are one-fifth as many FBI agents" assigned to bank fraud.

Treasury Secretary Timothy Geithner "is covering up," Black said. "Just like Paulson did before him. Geithner is publicly saying that it's going to take $2 trillion -- a trillion is a thousand billion -- $2 trillion taxpayer dollars to deal with this problem. But they're allowing all the banks to report that they're not only solvent, but fully capitalized. Both statements can't be true. It can't be that they need $2 trillion, because they have massive losses, and that they're fine ... They're scared to death of a collapse. They're afraid that if they admit the truth, that many of the large banks are insolvent, they think Americans are a bunch of cowards, and that we'll run screaming to the exits ... And it's foolishness, all right?

"Now, it may be worse than that. You can impute more cynical motives. But I think they are sincerely just panicked about, 'We just can't let the big banks fail.' That's wrong."

Black asked, "Why would we keep CEOs and CFOs and other senior officers that caused the problems? That's nuts ... We're hiding the losses instead of trying to find out the real losses? Stop that ... because you need good information to make good decisions ... Follow what works instead of what's failed. Start appointing people who have records of success instead of records of failure ... There are lots of things we can do. Even today, as late as it is. Even though we've had a terrible start to the [Obama] administration. They could change, and they could change within weeks."

He called for a 21st century version of the Pecora Commission, referring to hearings that sought the causes of the Great Depression, held during the 1930s by the U.S. Senate Committee on Banking and Currency.

Ferdinand Pecora was the committee's chief counsel and interrogator, a Sicilian émigré who was a progressive devotee of trust-busting Teddy Roosevelt and a former Manhattan assistant district attorney who successfully helped shut down more than a hundred Wall Street "bucket shops" selling bogus securities and commodity futures. He was relentless in his cross-examination of financial executives, including J.P. Morgan himself.

Pecora's investigation uncovered a variety of Wall Street calumnies -- among them Morgan's "preferred list" of government and political insiders, including former President Coolidge and a Supreme Court justice, who were offered big discounts on stock deals. The hearings led to passage of the Securities Act of 1933 and the Securities Exchange Act of 1934.

In the preface to his 1939 memoir, "Wall Street Under Oath," Ferdinand Pecora told the story of his investigation and described an attitude among the Rich Uncle Pennybags of the financial world that will sound familiar to Bill Black and those who seek out the guilty today.

"That its leaders are eminently fitted to guide our nation, and that they would make a much better job of it than any other body of men, Wall Street does not for a moment doubt," Pecora wrote. "Indeed, if you now hearken to the Oracles of The Street, you will hear now and then that the money-changers have been much maligned. You will be told that a whole group of high-minded men, innocent of social or economic wrongdoing, were expelled from the temple because of the excesses of a few. You will be assured that they had nothing to do with the misfortunes that overtook the country in 1929-1933; that they were simply scapegoats, sacrificed on the altar of unreasoning public opinion to satisfy the wrath of a howling mob."

According to Politico.com, at his March 27 White House meeting with the nation's top bankers, President Obama heard similar arguments and interrupted, saying, "Be careful how you make those statements, gentlemen. The public isn't buying that ... My administration is the only thing between you and the pitchforks."

Stand aside, Mr. President, and let us prod with our pitchforks to get at the facts.