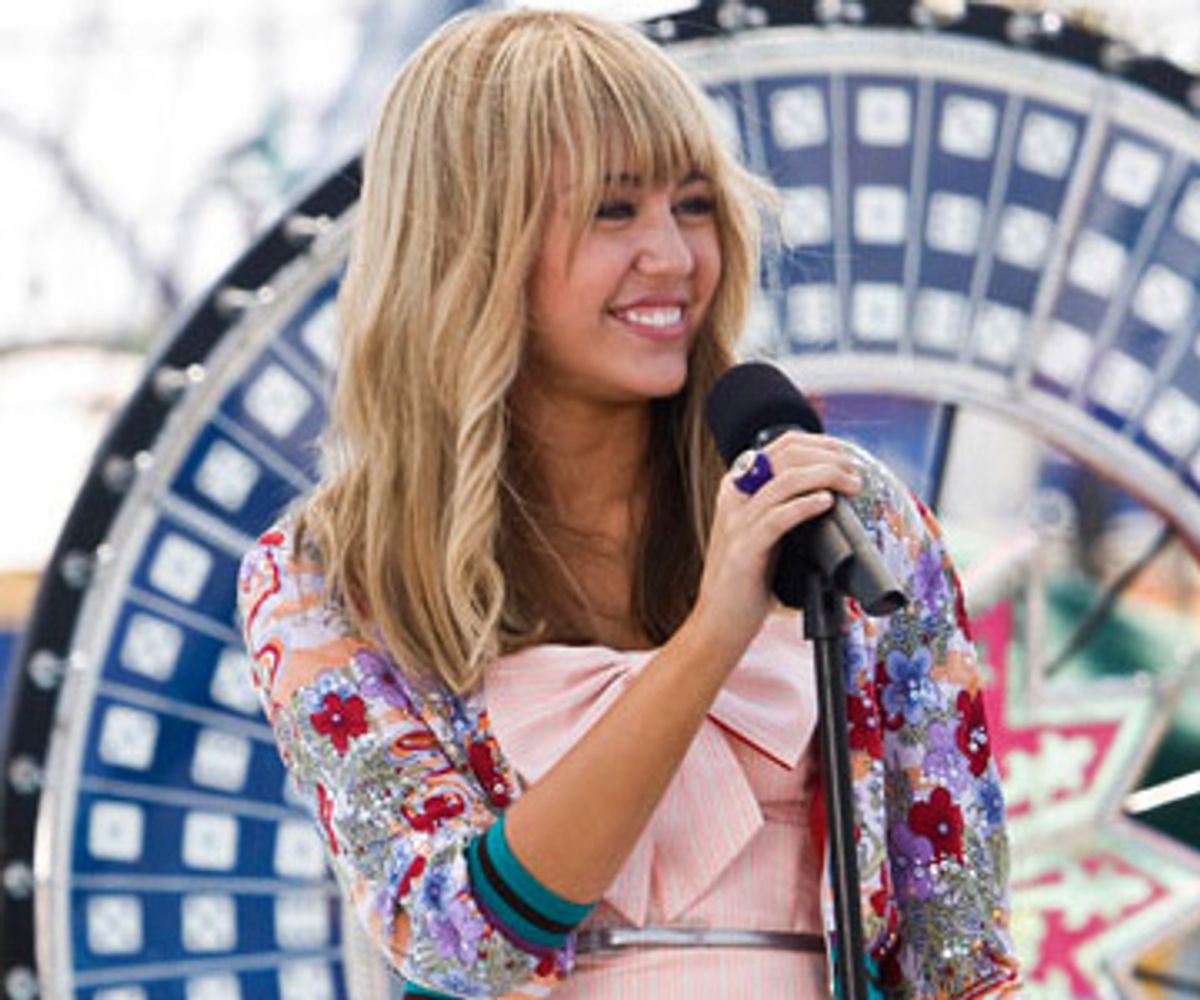 Is it just me or does Hannah Montana -- the pop-star alter-ego of the regular, ordinary girl played by Miley Cyrus in the movie version of the hit TV show, helpfully titled "Hannah Montana: The Movie" -- look a little blowsy? I don't mean tarty, like a 14-year-old who strives to look older by wearing shiny eye makeup and club gear -- that would make sense. There's just something a little matronly about Hannah, with her blond wig and pouty face, decked out in high-heeled boots and dangly earrings, that reminds me of a suburban matron who's overshot her prime before she's even reached it. As role models go, she's safe to the point of being a little pathetic.

Cyrus is just 16, around the age of the characters she's playing, and the show, like the movie, is targeted to girls who are much younger. (Yes, some boys may like it too, but for convenience' sake, I'm going to stick with the female pronoun.) The concept, at its core, is simple and brilliant. Cyrus' regular-girl character, Miley Stewart, has always dreamed of being a singer, but she also wants to have a normal teenage life. So she strikes a deal with her father, Robby Ray (played by Cyrus' real-life dad, Billy Ray): As her sunny, somewhat baby-faced brunette self, she'll go to school and do regular teenage stuff. But she also has the freedom to don the aforementioned blond wig and perform in the guise of Hannah Montana; only her family and her closest friend (played by Emily Osment) know her secret. That way, as she puts it in one of her chirpy, cheerful songs, she gets to live in the best of both worlds. As Hannah Montana she temporarily ceases to be a sheltered little girl and instead becomes a free agent, a performer who gets to try on the clothes, and the persona, of an adult sexual being.

Whether or not you think this idea is harmful for kids is up to you, but I very clearly remember being 6 years old and believing that someday I'd grow up to be either Emma Peel or Honey West, the character played by Ann Francis in the short-lived '60s TV show of the same name. (She was a private detective who wore black leotards and kept a pet ocelot in her bachelor-girl apartment.) I can assure you that, much to my disappointment, I grew up to be neither, but at least I now understand what the fantasy was about: It allowed me to try on the idea of being a glamorous, sexy adult without having to deal with the attendant responsibilities and complexities. I could always return to the safety of being a kid, which is the central notion behind "Hannah Montana."

The double-identity concept is laid out very clearly in "Hannah Montana: The Movie," so even if you have an Amish child who's never seen television, you can be assured she'll understand the movie's logic perfectly. (Why you'd be bringing such a child to the movies in the first place is between you and the elders.) Those of you who will be dragged to the theater this weekend might want to know that the plot of "Hannah Montana: The Movie" is slender but serviceable: Robby Ray believes Miley is becoming too wrapped up in the whole Hannah Montana thing, and wants her to forgo an important engagement to attend the birthday party of her grandmother (played by the wonderful actress Margo Martindale) in Tennessee. Miley doesn't want to comply, but she's tricked into it. The good news is that a former grammar-schoolmate of hers, Travis Brody (Lucas Hill), has grown up to look like a Bruce Weber model, complete with cowboy hat and artfully fitted-but-worn-in plaid shirt, and now works on her grandmother's farm.

Assorted conflicts and adventures ensue, and the movie overall is painless if not exactly electrifying. (The director is Peter Chelsom, the English filmmaker and actor who has previously made some very entertaining films for grown-ups, including the 2001 romantic comedy "Serendipity" and the 1991 charmer "Hear My Song." The script is by Daniel Berendsen, based on characters created by Michael Poryes, Richard Correll and Barry O'Brien.) Miley Cyrus, as Miley Stewart, is appealing enough, albeit in a too-cute way. She simply needs to fill the expectations of her millions of pint-size fans, which she does with exacting professionalism.

And it's not her fault that as Hannah, she has that trying-too-hard look. Maybe it's the movie's makeup artists who failed her -- as Hannah, she just doesn't look fresh and dewy enough, as even a teenage pop star ought to. And the wig looks a little too much like something Flip Wilson might wear as his own alter ego, Geraldine.

Worst of all for Cyrus, Taylor Swift -- not just a kiddie sensation but an exceptionally talented singer-songwriter -- makes a brief appearance in the movie as herself. Swift is a cool, composed performer, but she also comes off as genuine, while Cyrus is merely gen-u-eyn. In her very small cameo, Swift unintentionally but definitively upstages poor Hannah Montana. Little girls won't notice that now, but someday when they're older, and having a second look, they'll make the distinction. For now, they just need to worry about being little girls, and that's plenty.