While you were out

Back from Baghdad, the president clears out his in box and talks healthcare, pirates and mortgages. He will fix your muffler AND refinance your home. 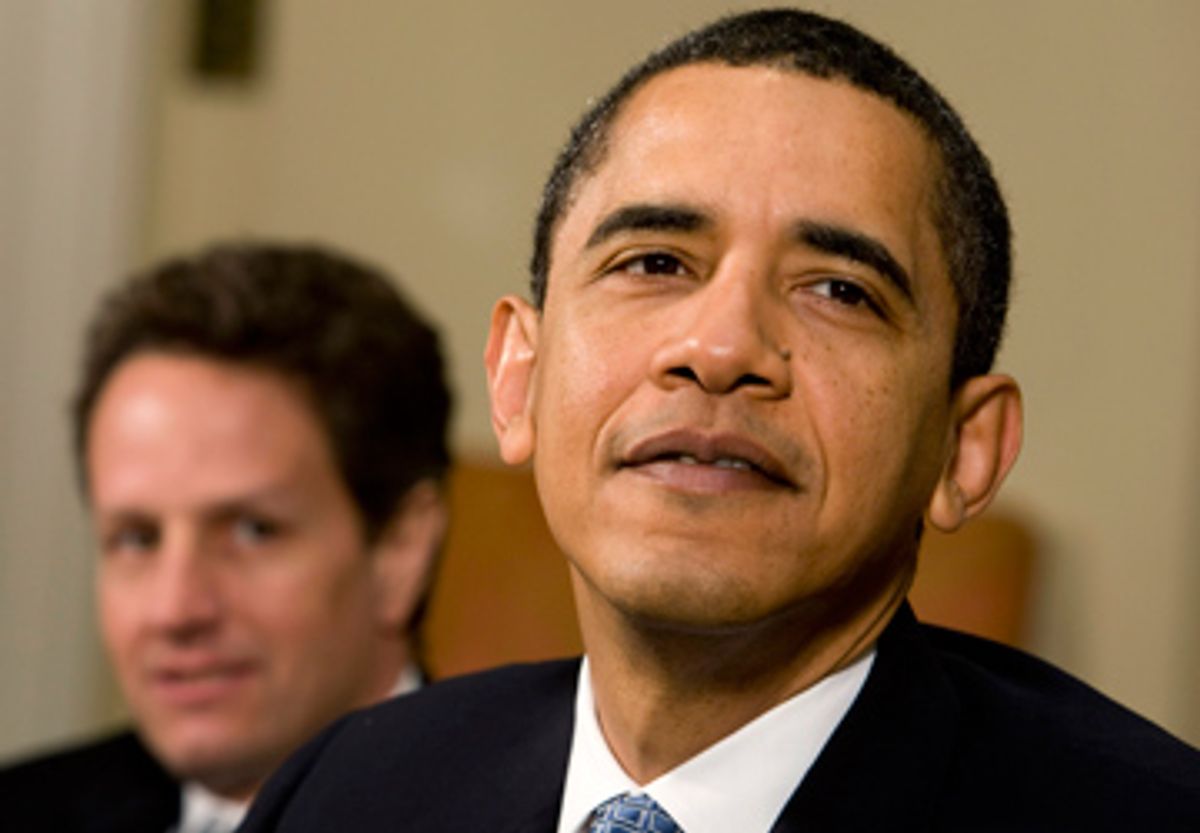 Those first few days back in the office after a long trip are always the hardest. There's jet lag to get over, e-mail to catch up on, vacation photos to upload. Which may be why President Obama has been taking it relatively slowly since he returned from Europe and the Middle East late Tuesday.

"It is good to be back," Obama declared Thursday at the White House, after spending Wednesday in private meetings. He has no public events set for Friday, either. "We've had a productive week working to advance America's interests around the world." But the implicit message tacked on was, now it's time to get back to what's ailing America at home. And so the first public glimpse of the president since he left U.S. troops in Baghdad earlier in the week was at a round-table discussion Thursday morning of just how easy it is to refinance your mortgage these days.

"What we want to do is to send a message that if you are having problems with your mortgage, and even if you're not and you just want to save some money, you can go to MakingHomeAffordable.gov -- MakingHomeAffordable.gov -- and the way the Web site is designed, you can plug in your information and immediately find out whether or not you are potentially eligible for one of these mortgage refinancings," Obama told the TV cameras. "Take advantage of MakingHomeAffordable.gov, and that will allow you to figure out exactly how to proceed on this in a way that's making you money, saving you money, as opposed to costing you money." His salesmanship presidency, apparently, is picking up right where he left it; before Obama headed off to Europe, he was pitching federal car warranties, and now that he's returned, he's pitching federal refi deals.

But there may have been a downside to being overseas so long during the worst recession in 70 years. "People were really glad that he was so well received" by foreign leaders, Lake said of the focus-group participants. "[But a]fter a while -- the trips to, like, Strasbourg and Turkey -- it's like, 'Well, why doesn't he get home?'… It was kind of, 'Yes, but. Yes, great trip, but let's get home, let's get going.'" Particularly with taxes due next week, the economy is still weighing on many voters' minds, and Lake said no one in her focus groups mentioned having noticed a slightly larger paycheck this week, thanks to the stimulus package's tax cuts.

White House aides say they're not concerned, pointing out that other polling data -- specifically, the answer to the question of whether the country is on the right track or the wrong track -- is better now than it's been in years. Still, Obama went out of his way Thursday to tell people that his administration's policies have lowered interest rates. "Around the table here, you see some wonderful families who have taken advantage of what are now historically low mortgage rates, brought about in part by some extraordinary actions by the Federal Reserve, but also brought about by the housing plan that [Treasury Secretary] Tim Geithner and [Housing and Urban Development Secretary] Shaun Donovan helped to design," Obama said. Interest rates are, indeed, at or near record lows, and the White House says applications to refinance have increased by 88 percent since the administration's housing plan was announced in February. It's not clear how much of the credit for that should go to Obama's plan, as opposed to the unprecedentedly low rates the Federal Reserve is setting, but the White House was happy to take all of it.

On Obama's first day back in the public eye, military matters weren't entirely forgotten. A few hours after the refinance pitch, he joined Pentagon and Veterans Affairs officials to tout a new plan for electronic medical records that would follow soldiers, sailors, airmen and Marines from active duty into retirement. The idea is to cut down on backlogs in care that can leave some veterans waiting months to see doctors. The new plan didn't address deeper problems like those Salon has exposed this week, where doctors told wounded soldiers they were being pressured by the Army not to diagnose post-traumatic stress disorder.

The day didn't have the carefully tailored feel of some others recently; the White House wasn't making much of an effort to keep the news cycle on any one specific theme. Aides had leaked word Wednesday night that Obama would push for immigration reform this year, and questions on that -- and, of course, the ongoing pirate saga -- took up as much of press secretary Robert Gibbs' afternoon news conference as anything related to what Obama did Thursday. Republican operatives, pushing the latest line of attack against the White House, wondered if Obama wasn't spreading himself too thin, or if aides weren't losing focus. "Obama is pushing in many rhetorical directions, with little day-to-day consistency," GOP consultant Alex Conant wrote on his blog late Wednesday. "It's easy to step on a message when you don't have a consistent one."

But anyone doubting that Obama's aides were keeping close tabs on what he was doing and how it fit into their message only had to look at the schedule for Thursday released by the White House to the press late Wednesday night -- in which someone accidentally copied a long e-mail conversation, sent to more than 20 aides, about how to describe each of Obama's Thursday events. One in particular, a private Passover seder Obama planned to host in the White House family dining room, was the subject of three e-mails back and forth. "Apparently Jewish here and in neighboring states are now calling wondering why they have not been invited," one advisor wrote, either leaving out a word -- like "supporters" -- or inventing some new shorthand.

That's just how it goes when you're the president -- you can't even slurp your matzo ball soup with a few friends, staff and family without the whole world wanting to come watch. No wonder Obama took Wednesday off. Welcome back to Washington, Mr. President. How was your trip?