The new Netanyahu government couldn't move against Tehran without approval from Washington -- but any mixed messages from the Obama administration could lead to catastrophe. 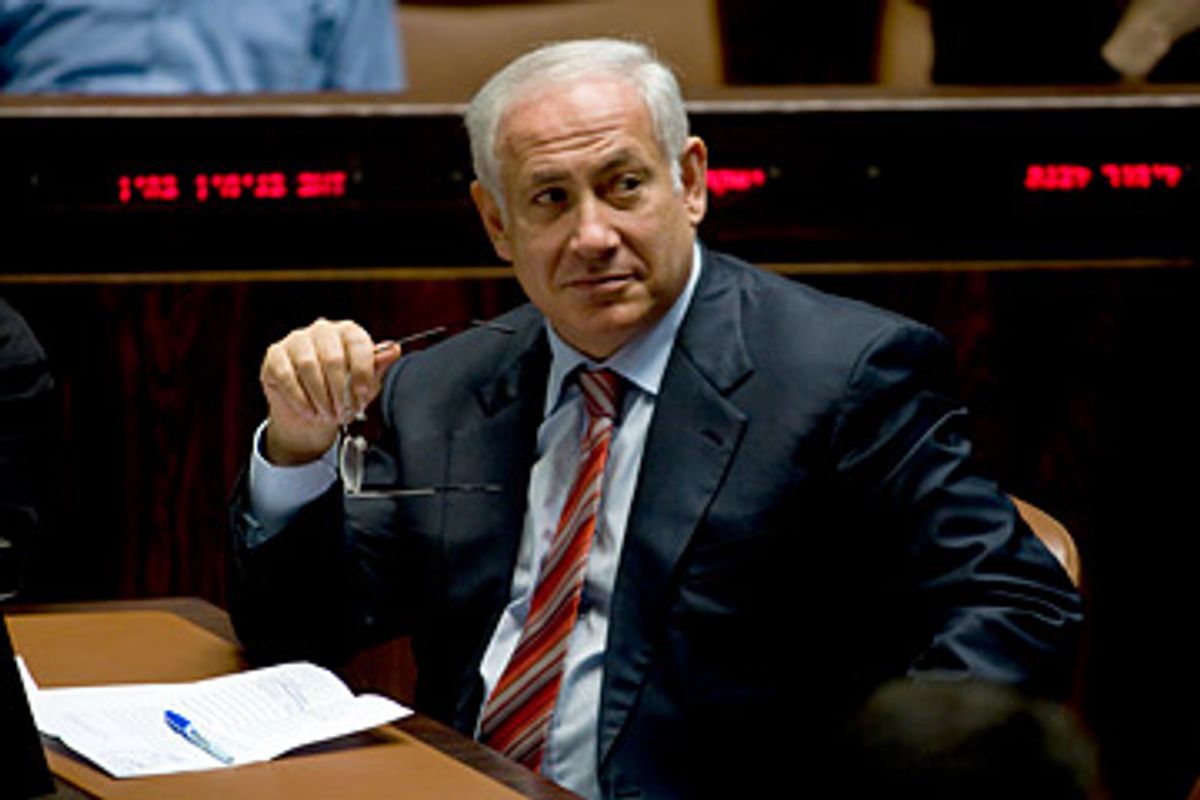 Israel has been steadily ratcheting up pressure on the United States concerning the grave threat allegedly posed by Iran, which seems poised to master the nuclear fuel cycle, and thus the capacity to produce nuclear weapons. The new Israeli prime minister, Likud Party hawk Benjamin Netanyahu, has warned President Barack Obama that if Washington does not quickly find a way to shut down Iran's nuclear program, Israel will.

Some analysts argue that this is manufactured hysteria, not so much a reflection of genuine Israeli fears as a purposeful diversion from other looming difficulties. The Netanyahu government is filled with hard-liners adamantly opposed to withdrawal from, or even a temporary freeze on, settlements in the occupied territories, not to mention to any acceptance of Palestinian statehood. On his first day as foreign minister, extremist demagogue Avigdor Lieberman, with characteristic bluster, announced that Israel was no longer bound by the 2007 Annapolis agreements brokered by Washington, which called for accelerated negotiations toward a two-state settlement.

Such talk threatens to lead the Israelis directly into a clash with the Obama administration. In what can only be taken as a rebuttal of the Netanyahu government's recent pronouncements, in his speech to the Turkish Parliament Obama pointedly reasserted Washington's commitment to a two-state settlement and to the Annapolis understandings. So what better way for Netanyahu to avoid an ugly clash with a popular American president than to conveniently shift the discussion to an existential threat from Iran -- especially if he can successfully present it as a threat not just to Israel but to the West in general?

All of this adds up to a plausible argument against undue alarm over the latest Israeli warnings about an attack on Iran, but it's flawed on several grounds. There is a broad, generally accepted paranoia in Israel about Iran, a belief that its leaders must be stopped before they proceed much further in their uranium enrichment program. (This view is not shared on the Israeli left, but it's now a ghost of its former self.)

In an interview, Ephraim Kam, deputy director of the Institute for National Security Studies in Tel Aviv and a specialist on the Iran issue, commented, "Of course there are different opinions, but there is a general consensus, among both security experts and political leaders, from Labor to the right wing. This is not a controversial issue: if Iran acquires nuclear weapons, it will pose a deep threat. It will be the first time in our history that another country can deal a major blow to Israel."

Kam hastens to add that, in his own view, the scenario Netanyahu proposes -- that Iran is led by irrational fanatics who would nuke Israel at the first chance, even knowing that an Israeli nuclear counterstrike would be swift and catastrophic -- is false. "Iran is a pragmatic, logical player," Kam says. He remains convinced that "even a radical fundamentalist regime" wouldn't attack Israel, but he adds, "This is just my assessment, and assessments can go wrong. I wrote a study on wrong assessments, so I know something about this." In other words, if Kam's claims about the Israeli consensus are correct, the country's leadership takes it for granted that Iran is indeed hell-bent on producing a nuclear weapon and is not inclined to take a chance that a nuclear Iran will play by the MAD (as in mutually assured destruction) rules hammered out by the two Cold War superpowers decades ago and never use it.

This attitude reflects a long-standing Israeli strategic principle: that no neighboring state or combination of states can ever be allowed to achieve anything faintly approaching military parity, because if they do, they will try to destroy the Jewish state. By this logic, Israel's only option is to establish and then maintain absolute military superiority over its neighbors; they will, so this view goes, accept Israel's presence only if they know they're sure to be defeated, or at least vastly outmatched.

This is the famous "iron wall," conceived by early Zionist leader Vladimir Jabotinsky more than 80 years ago, well before the founding of Israel itself. (Jabotinsky founded the Revisionist movement, which in opposition to the Labor mainstream refused to accept any territorial compromise regarding Zionist aims, such as partition. Although he and his followers were for years shut out of the political leadership, their views regarding Israel's neighbors became deeply lodged in the public psyche.) If Iran were to acquire the capacity to build even one nuke -- Israel itself is estimated to have 150-200 of them -- that iron wall would be considered seriously breached, and the country might no longer be able to dictate terms to its neighbors. Given Iran's support for Hezbollah in Lebanon and Hamas in Gaza, Israel would then have to recalibrate its strategy both on its northern front and vis-à-vis the Palestinians.

Recent developments in Israel could certainly give the impression of a nation preparing for war: the Home Front command, one of four regional divisions of the Israeli army, has just announced the largest defense exercise in the country's history. It will last an entire week and is intended to prepare the civilian population for missile strikes from both conventional warheads and unconventional ones (whether chemical, biological or nuclear). Meanwhile, the country is accelerating its testing of missile defense systems, having just announced the successful launch of the Arrow II interceptor.

Can Israel go it alone?

Would Israel really attack Iran without at least tacit approval from Washington? Could Israel do so without such approval? At the very least, Israel would need approval simply to get permission to fly over Iraq, whose airspace is controlled by the U.S. military, not the Iraqi government in Baghdad. As columnist Aluf Benn put it in the Israeli newspaper Ha'aretz, "Defense experts say that without a green light from Washington, Netanyahu and Barak will not be able to send in the air force." Kam adds, "In my judgment, it is somewhere between difficult to impossible for Israel to do it alone, for both technical and political reasons."

Most analysts here believe that a solo Israeli attack would, at best, set back Iran's nuclear program by several years -- not that this would necessarily be a deterrent to Netanyahu & Co. It's widely believed that, in their view, even a temporary delay in Iran's nuclear capability would be an improvement on the current course. It's worth recalling that Israel sought an explicit go-ahead from the Bush administration for an attack last year, which President Bush -- presumably fearing massive conventional retaliation from Iran in both Iraq and Afghanistan -- sensibly refused, a rare moment in his tenure when he did not accede to Israeli wishes.

It's also clear that President Obama seeks to resolve the standoff with Iran through diplomatic means. He's abandoned the confrontational rhetoric of his predecessor and continues to extend peace feelers to the Islamic Republic. Tehran's response has been mixed, but at least a new mood of negotiation is in the air.

Israeli strategists, however, see this new mood as threatening, not hopeful. Any U.S. rapprochement with Iran -- especially if carried out on terms that acknowledge Iran's status as a regional power -- could, they fear, undermine Israel's "special relationship" with Washington. As Iran analyst Trita Parsi put it in a recent piece in the Huffington Post, Iran would then "gain strategic significance in the Middle East at the expense of Israel."

It's within the realm of possibility, for example, that Washington could work out a grand bargain with Tehran terminating its policy of regime change and ending sanctions in return for Tehran's vow never to weaponize its nuclear program. Intrusive international inspections would presumably guarantee such a bargain, but Tehran's national pride would remain intact, as it would be allowed to retain the right to enrich uranium and develop a peaceful nuclear infrastructure.

There has even been some recent slippage in Washington's language when it comes to demands placed on Iran -- with an insistence on an end to all nuclear enrichment evidently being replaced by an insistence on no weapons development. To Israel, this would be a completely unsatisfactory compromise, as its leaders fear that Iran might at some point abandon such an agreement and in fairly short order weaponize.

Given Obama's new approach, it might seem that Israel is stymied for now. After all, it's hard to imagine Obama giving the go-ahead for an attack. Just this week, Vice President Joe Biden told CNN that he thought such an Israeli attack "would be ill-advised."

Other factors, however, play in the hard-liners' favor: the Obama administration's new special envoy for Iran, Dennis Ross, is himself a hard-liner. Last year, Ross was part of an ultra-hawkish task force that predicted the failure of any negotiations and all but called for war with Iran. Ross is a man who not only knows how to play the bureaucratic game in Washington, but has powerful backers in the administration, and his views will have plenty of support from pro-Israel hawks in Congress.

The attitude of another key sector in decision-making, the high command of the U.S. military, may also be evolving. Washington's dilemma in Iraq is not nearly as dire as it was two years ago. The nightmare envisioned by the American generals running the Iraq campaign in recent years -- that, in response to an attack on its nuclear facilities, Iran could send tens of thousands of well-trained commandos across the border and inflict grave damage on U.S. forces -- has faded somewhat. The Iraqi government's military has much better control of the country today, with insurgent violence at far lower levels. The Shiite Mahdi Army and Iran-connected "special groups" seem to be mostly quiescent.

Of course, the situation in Iraq is still unstable, and any attack on Iran could easily throw the country back into ungovernable chaos. Still, given the role we know American commanders played in nixing such an attack in the Bush years, the question remains: Has resistance to such an attack lessened in the military? It's unclear, but an issue worth monitoring, because American commanders were the most consistent, persuasive voices for moderation during the Bush administration.

It should go without saying that an Israeli attack on Iran would have disastrous consequences. No matter what Washington might claim, or how vociferously officials there denounce it, such an attack would be widely understood throughout the Muslim world as a joint U.S.-Israeli operation.

It would, as a start, serve as a powerful recruiting tool for extremist Islamist groups. In addition, an outraged Iran might indeed send commandos into Iraq, aid armed Iraqi groups determined to attack U.S. and government forces, shoot missiles into the Saudi or Kuwaiti oilfields, and attempt to block the Straits of Hormuz though which a significant percentage of global oil passes. Washington would certainly have to write off desperately needed cooperation in the war against the Taliban and al-Qaida in Afghanistan and Pakistan. Any attack would only strengthen the reign of the mullahs in Iran and reinforce the country's determination to acquire a nuclear deterrent force that would prevent future attacks. And keep in mind, Iran's nuclear program has overwhelming public support, even from those opposed to the current regime.

Given the Netanyahu government's visible determination to attack, an ambiguous signal from Washington, something far less than a green light, could be misread in Tel Aviv. Anything short of a categorical, even vociferous U.S. refusal to countenance an Israeli attack might have horrific consequences. So here's a message to Obama from an observer in Israel: Don't flash the yellow light -- not even once.

Roane Carey, on leave as managing editor of the Nation magazine, is on a journalism fellowship at the Chaim Herzog Center for Middle East Studies and Diplomacy at Ben-Gurion University in Beer-Sheva, Israel. He is co-editor of "The Other Israel."