The president summarizes and defends his economic efforts to date. And shows off his new dog. 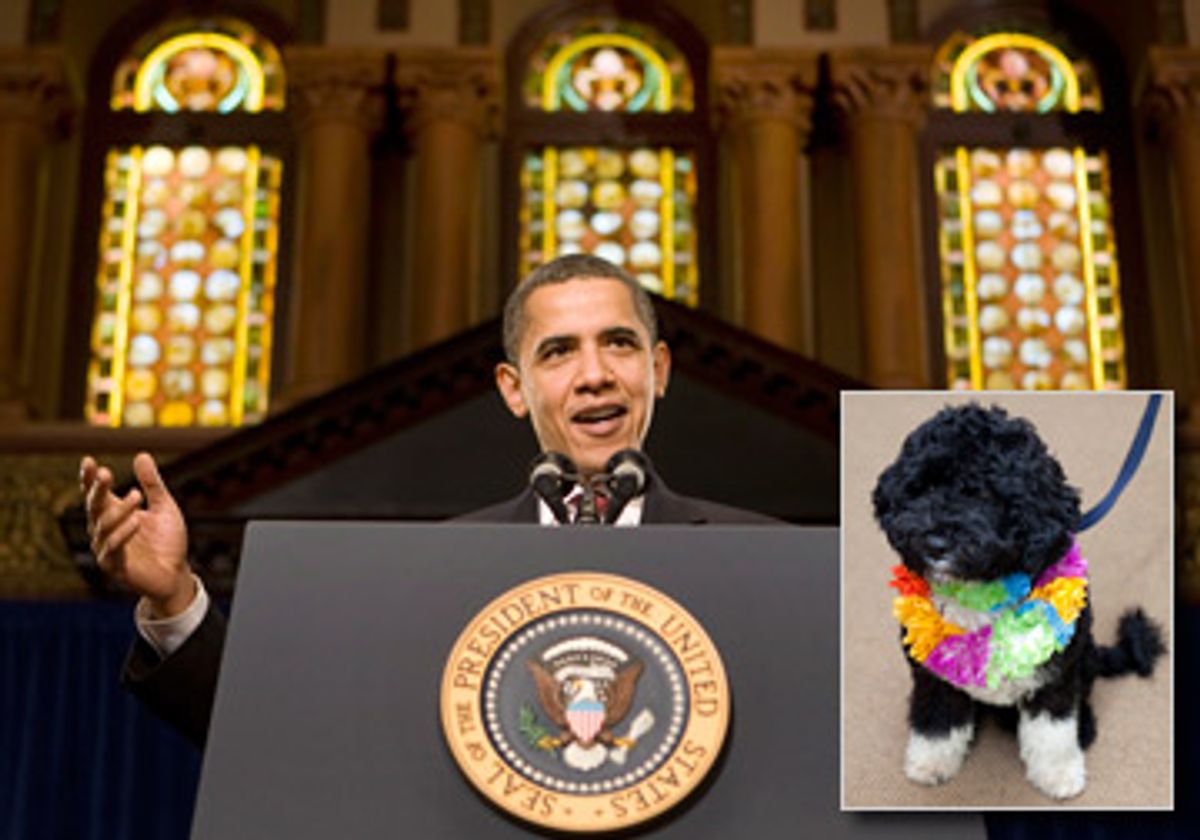 The White House set up two events Tuesday to feed the endless maw of the 24-hour news cycle. At one event, President Obama gave a detailed, thoughtful review -- and defense -- of his economic policies since taking office, with an eye toward explaining what the administration is doing and why. The other one, of course, featured a dog.

There wasn't much point in guessing which story would get more attention; puppies always win that battle. But Obama's speech on the economy at Georgetown University seemed intended to get his administration the same kind of public opinion jolt that some soft-focus footage of Bo, the Obama family's new Portuguese water dog, will probably bring. "It has now been 12 weeks since my administration began," Obama said as he started. "And I think even our critics would agree that at the very least, we've been busy."

What followed didn't break any new ground, at least not for anyone who's listened to Obama talk about the economy before -- which he does nearly every day. But the law professor-turned-president took a few steps back and gave a sweeping overview of the economic collapse and how he plans to pull the country through it, taking advantage of the academic setting. (If any students skipped economics or public-policy classes to hear the speech, they got what they deserved.) Since it was also a Jesuit setting, Obama used a metaphor from the Sermon on the Mount to wrap his thoughts together. The Bible, Obama reminded the crowd, tells of a man who built a house on a foundation of sand, only to see it wiped away by the weather. Another man builds his on a foundation of rock, and it survives a storm. "We cannot rebuild this economy on the same pile of sand," Obama said. "We must build our house upon a rock. We must lay a new foundation for growth and prosperity -- a foundation that will move us from an era of borrow and spend to one where we save and invest; where we consume less at home and send more exports abroad."

The speech wandered from cautious optimism to a reminder that tough times are still ahead. "By no means are we out of the woods just yet," Obama said. "But from where we stand, for the very first time, we're beginning to see glimmers of hope. And beyond that, way off in the distance, we can see a vision of America's future that is far different than our troubled economic past." Administration aides have started talking about the recession ending sooner than expected; Larry Summers, a top economic advisor, said last week that things are improving and "we will no longer have that sense of free fall" (though it may be easier for a guy who made $5.2 million from a hedge fund last year to think happy thoughts about the economy).

Polls show voters are starting to agree. Most still think the economy is getting worse, but by smaller margins than late last year, when the consensus opinion seemed to be that there was no end in sight to the economic woes. But Obama's team is still treading carefully on the subject. On Wednesday, when federal income taxes are due, he'll have an event to hype the tax cuts most people's paychecks are already reflecting. His most dogged conservative opponents, meanwhile, will be otherwise occupied, with "tea parties" designed as part tax revolt, part generalized protest against everything Obama stands for (mostly socialism, according to the organizers).

Obama's speech Tuesday included more than the usual number of nods to people who disagree with him, even for a president who likes to frame his speeches so they build toward consensus. "I know there's a criticism out there that my administration has been spending with reckless abandon, pushing a liberal social agenda while mortgaging our children's future," Obama said, putting a faintly ironic sneer into the words as he spoke them. "You've heard the argument." He defended his faith in public investment. "In tackling the deficit issue, we simply cannot sacrifice the long-term investments that we so desperately need to generate long-term prosperity," he said. "That's the argument that some critics have made: Well, you're proposing healthcare reform, you shouldn't be doing that; you're proposing education investments, you shouldn't be doing that, that adds to the deficit." And he went on to chide the entire culture of Washington. "There's also an impatience that characterizes this town -- an attention span that has only grown shorter with the 24-hour news cycle that insists on instant gratification in the form of immediate results or higher poll numbers," he said, unironically (Look! A dog!). "When a crisis hits, there's all too often a lurch from shock to trance, with everyone responding to the tempest of the moment until the furor has died down, the media coverage has moved on to something else, instead of confronting the major challenges that will shape our future in a sustained and focused way." The speech, with its broad scope and long-term focus, tried to carry the same message. As one White House advisor put it in an e-mail to Salon, "There is never a downside in explaining things to the American people and treating them like adults."

But to update a biblical verse Obama didn't cite at Georgetown, there is a time for everything: a time for treating people like adults, and a time for puppies. And just an hour after the speech ended, Washington's attention had shifted to puppies. "I don't know the exact movements of the dog," White House press secretary Robert Gibbs said during his afternoon briefing for the media, after a question about the canine debut. "I know later this afternoon, weather permitting, the dog will be outside. If not, the dog will be inside ... You'll get a chance to see the dog. You'll get a chance to see [the Obamas] with the dog. Thus -- thus concludes my official comments on the dog." Changing the culture here may wind up being even harder than Obama realizes.