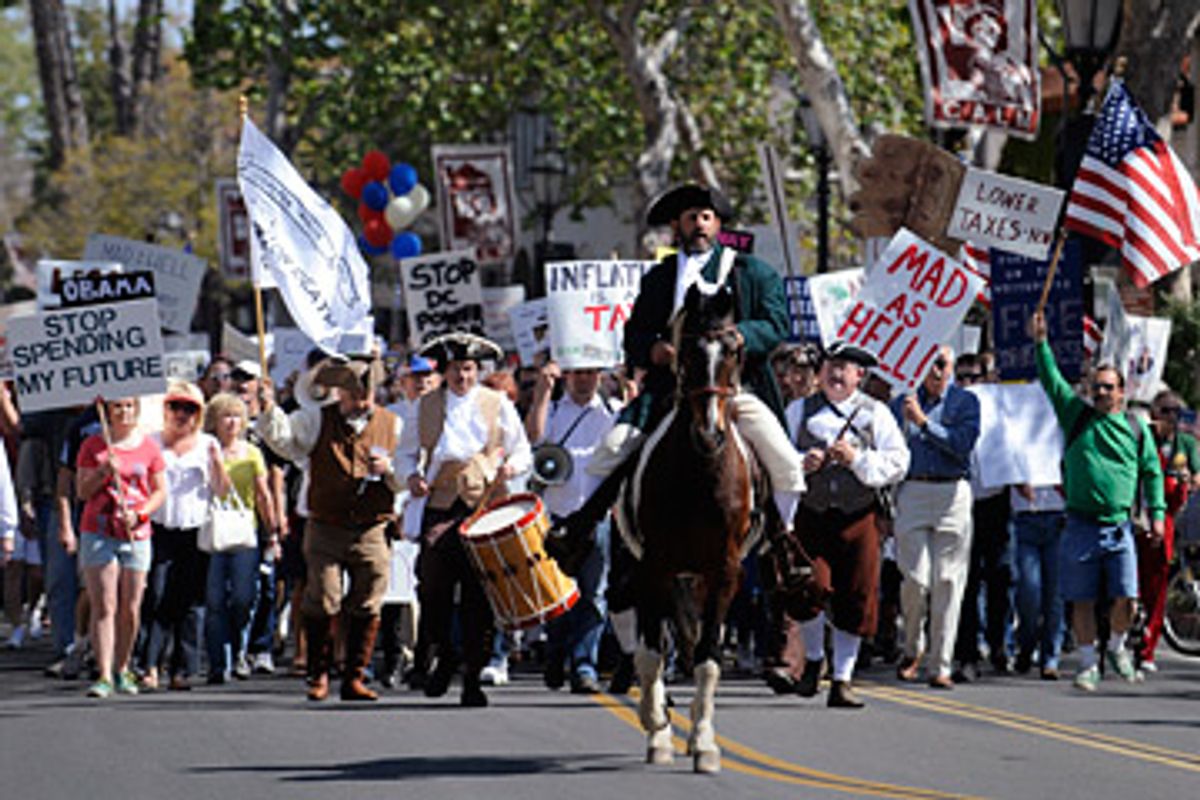 Protests are as American as apple pie, and that includes the Glenn Beck, Fox News and CNBC backed "Tax Day Tea Parties" on Wednesday. The work of a small if increasingly angry echo chamber of Obama obstructionists, they'll come and go without hurting the president's political approval ratings. We're covering them -- and we're asking you to help us cover them -- but it's entirely possible to make too much of them.

Just in time for this day of massive protest, Gallup released a poll showing that 61 percent of Americans believe the income taxes they paid this year are "fair," and more Americans now say the amount they pay is "just right" than "too high" -- one of the most pro-tax outcomes since Gallup began polling on this question in 1956. Great timing, Tea Partiers! Way to have your fingers on the nation's pulse.

Still, it's interesting to examine what Obama's opponents think are winning messages at a time when they're utterly shut out of power. Remember that when CNBC's Rick Santelli kicked off the tea-party movement, he was railing against a small component of Obama's credit-crisis plan intended to help homeowners avoid foreclosure. The entire TARP program will easily cost a trillion dollars; Timothy Geithner's PPPIP ("Public Private Partnership Investment Program," or "Cash for Trash" in Paul Krugman's words) will cost an estimated half-trillion more. But Santelli got upset about "losers" who bought homes they couldn't afford, and who'd get helped out by taxpayers -- who will get only a fraction of the money Obama's spending on the crisis.

Imagine that: Not a word from Santelli about bailouts for bankers and other plutocrats with criminally poor judgment. Likewise, yesterday I was on MSNBC's "The Ed Show" with radio talker Neal Boortz (who's joining Sean Hannity at the tea party protest in Hot-lanta!) and host Ed Schultz was railing (appropriately) against the way banks and credit card companies are taking TARP money with one hand, and then raising interest rates and consumer fees on the other. TARP oversight director (and my personal hero these days) Elizabeth Warren is livid about it, telling the Wall Street Journal: "The people who are subsidizing the activities of the banks through their tax dollars are the same people who are furnishing the high profits through consumer lending. In a sense, we're asking taxpayers to pay twice."

But that didn't bother Boortz, who ridiculed people who run balances on their credit cards in the first place, which he insisted mainly pay for "luxuries." I noted a recent raft of stories about consumers forced into bankruptcy because they paid healthcare with credit cards, but Boortz didn't seem to care. Maybe, like Santelli, he'd just call such people "losers."

Of course, the real irony, maybe even tragedy, of the Tea Party movement is the fact that it's Obama who kept a campaign promise and lowered taxes on roughly 95 percent of American taxpayers. How many folks attending the protests do you expect will know that? There may even be a significant percentage of Tea Partiers who could be penalized by high-balance fees by the credit card companies or who might ultimately need help with their mortgages.  Sucks to be those guys! Expect the president to spend much of April 15 talking about his tax cuts and other assistance for struggling, middle-income Americans. Let's hope his message gets through, even to some of the Tea Party attendees. There's still so much class-unconsciousness going on.

To me the most laughable aspect of the Tax Day protests is the leadership role taken by has-beens like Newt Gingrich and the ever-creepy Dick Armey. (No teabagging jokes, please!) Let's remember when Armey insisted President Clinton's minor tax increases in the mid-'90s would destroy the economy; of course the Clinton years turned out to be an economic golden age.  Why does being wrong never hurt guys like Dick?  As Joe Conason notes, when Armey left Congress for his banking- and tobacco-funded golden parachute Freedom Works, his first failed project was to try to organize Astroturf groups supporting Social Security privatization. I expect Armey's Tea Party movement to be just as effective.

The escalation of shrill and sometimes violent anti-government rhetoric since Obama took office is a blight on our culture. But while we'll pay attention to the Tax Day Tea Party movement, we won't overreact. Obama's greatest achievement was finally convincing a decisive number of red-state and working-class people to stop supporting Republicans over their own class interests. If you attend any Tea Party events -- or cover them for Salon -- be sure to ask people there if they know whether Obama cut their taxes. Maybe we can start a dialogue, not a fight. I'll be attending the Tea Party at House Speaker Nancy Pelosi's office here in San Francisco. More on Wednesday.