The objections of the CIA are dismissed and the White House has reportedly opted for full disclosure of Bush-era torture documents.

In a just-released statement, Barack Obama announced that -- in response to an ACLU FOIA lawsuit -- he has ordered four key Bush-era torture memos released, and the Associated Press, citing anonymous Obama sources, is reporting that "there is very little redaction, or blacking out, of detail in the memos."  Marc Ambinder reports that only the names of the CIA agents involved will be redacted; everything else will be disclosed.  Simultaneously, and certainly with the intent to placate angry intelligence officials, Attorney General Eric Holder has "informed CIA officials [though not necessarily Bush officials] who used waterboarding and other harsh interrogation tactics on terror suspects that they will not be prosecuted," and Obama announced the same thing in his statement.

I will add more detailed commentary, along with an interview with the ACLU's lead counsel, Jameel Jaffer, as soon as the documents themselves are available.   If the report about the OLC memos are accurate, Obama will have done exactly the right thing here and will deserve real credit.  My analysis earlier today of the issues surrounding disclosure is here.  Here is part of what Obama said in his statement:

The Department of Justice will today release certain memos issued by the Office of Legal Counsel between 2002 and 2005 as part of an ongoing court case. These memos speak to techniques that were used in the interrogation of terrorism suspects during that period, and their release is required by the rule of law. . . .

While I believe strongly in transparency and accountability, I also believe that in a dangerous world, the United States must sometimes carry out intelligence operations and protect information that is classified for purposes of national security. I have already fought for that principle in court and will do so again in the future. However, after consulting with the Attorney General, the Director of National Intelligence, and others, I believe that exceptional circumstances surround these memos and require their release.

First, the interrogation techniques described in these memos have already been widely reported. Second, the previous Administration publicly acknowledged portions of the program – and some of the practices – associated with these memos. Third, I have already ended the techniques described in the memos through an Executive Order. Therefore, withholding these memos would only serve to deny facts that have been in the public domain for some time. This could contribute to an inaccurate accounting of the past, and fuel erroneous and inflammatory assumptions about actions taken by the United States.

In releasing these memos, it is our intention to assure those who carried out their duties relying in good faith upon legal advice from the Department of Justice that they will not be subject to prosecution. The men and women of our intelligence community serve courageously on the front lines of a dangerous world. Their accomplishments are unsung and their names unknown, but because of their sacrifices, every single American is safer. We must protect their identities as vigilantly as they protect our security, and we must provide them with the confidence that they can do their jobs.

This is a time for reflection, not retribution. I respect the strong views and emotions that these issues evoke. We have been through a dark and painful chapter in our history. But at a time of great challenges and disturbing disunity, nothing will be gained by spending our time and energy laying blame for the past. Our national greatness is embedded in America’s ability to right its course in concert with our core values, and to move forward with confidence. That is why we must resist the forces that divide us, and instead come together on behalf of our common future.

The United States is a nation of laws. My Administration will always act in accordance with those laws, and with an unshakeable commitment to our ideals. That is why we have released these memos, and that is why we have taken steps to ensure that the actions described within them never take place again.

Just to get a sense for the pressure being exerted on Obama, here is Gen. Michael Hayden -- the NSA Director when the illegal spying program was implemented and then CIA Director -- arguing vehemently against release of the memos today on MSNBC.  He clearly does not believe in open government and these are the objections Obama had to override:

I'll have more details as soon as these memos are available.  One can certainly criticize Obama for vowing that no CIA officials will be prosecuted if they followed DOJ memos (though that vow, notably, does not extend to Bush officials), but -- assuming the reports about redactions are correct -- there is no grounds for criticizing Obama here and substantial grounds for praising him.

UPDATE:  These memos are now becoming available, and do appear to be almost entirely unredacted.  They are unbelievably ugly and grotesque and conclusively demonstrate the sadistic criminality that consumed our government.  Just consider parts of this August 1, 2002 Memo (.pdf) by then OLC official (and now-federal judge) Jay Bybee, authorizing the following techniques for Abu Zubaydah, who was shot three times during his capture and was still suffering from those wounds when these techniques were authorized (click on images to enlarge - it's worth it):

"Walling" is slamming an individual into a wall.  "Cramped confinement" means "placement of the individual in a confined space" that "is usually dark . . . the dimensions of which restrict the individual's movements" -- in other words, a coffin-like space.  The memo specifically states that the purpose of "stress positions" is to cause "muscle fatigue."  And here is what "insects placed in a confinement box" means (and here is one unexplained redaction):

Later, the memo notes that Zubaydah was to be told that the insect inserted in his box was a "stinging insect."  It then provides detailed instructions on how the insects can be used to torment him:

The memo then describes waterboarding in excruciating detail, matter-of-factly noting: "the subject's body responds as if the subject were drowning."  Amazingly, it concludes that "the use of waterboarding constitutes a threat of imminent death," but is nonethless permissible and legal because it does not result in "prolonged mental harm."

The memo also takes note of the fact that Zubyaduh had serious wounds from his capture, yet none of that interfered in the authorization to subject him to these techniques.  This was the concluding paragraph: 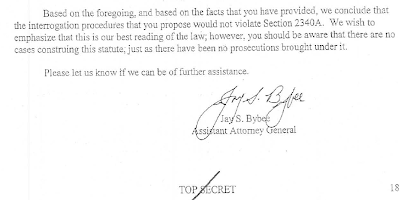 That's what the U.S. Justice Department authorized and what our highest officials ordered.  And that's just one of the four memos released today.

UPDATE II:  The ACLU has all four memos here.  This 46-page May 10, 2005 memo (.pdf) from OLC Chief Steven Bradbury authorizes (under Constitutional and international law) all of these tactics for any "high-value detainees": nudity, "dietary manipulation" involving "minimum caloric intake at commerical weight-loss programs," "corrective techniques" (facial and abdominal slapping), water dousing, "walling," stress positions and "wall standing" (to "induce muscle fatigue and the attendent discomfort"), cramped confinement, and sleep deprivation.  It also authorized "no more than two sessions" of waterboarding in "any 24-hour period."

Bradbury here discusses (and, of course, approves) of the specific methods used to have a detainee undergoing sleep deprivation wear a diaper:

Bradbury legalized all of these methods despite this amazing ackonwledgment; if you read just one memo excerpt, read this one: 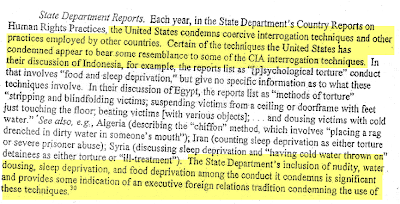 They explicitly recognized that the techniques they were authorizing were ones that we condemned other countries for using -- including as "torture" -- but nonetheless approved them, explicitly saying that the standards we impose on others do not bind us in any way:

Finally, given all the talk about how it would be so unfair to prosecute Bush officials given that they believed what they were doing was legal, Bradbury made clear in the last paragraph of the memo just how dubious was his conclusion that all of these techniques were legal:

The more one reads of this, the harder it is to credit Obama's statement today that "this is a time for reflection, not retribution."  At least when it comes to the orders of our highest government leaders and the DOJ lawyers who authorized them, these are pure war crimes, justified in the most disgustingly clinical language and with clear intent of wrongdoing.  FDL has a petition urging Eric Holder to immediately appoint a Special Prosecutor to determine if criminal proceedings should commence.

Obama did the right thing by releasing these memos, providing all the information and impetus the citizenry should need to demand investigations and prosecutions.  But it is up to citizens to demand that the rule of law be applied.

UPDATE III:  My interview with the ACLU's Jameel Jaffer can be heard by clicking PLAY on the recorder below.  Jameel (a) calls for a Special Prosecutor on behalf of the ACLU and (b) emphasizes that nothing said by Obama or Holder today should be understood to foreclose criminal prosecutions.  For all the reasons Jameel describes, I agree with that assessment, and Marc Ambinder reports that senior Obama officials told him (anonymously, of course) that nothing Obama or Eric Holder said today was intended to foreclose prosecutions.  Russ Feingold made a similar point.

Needless to say, I vehemently disagree with anyone -- including Obama -- who believes that prosecutions are unwarranted.  These memos describe grotesque war crimes -- legalized by classic banality-of-evil criminals and ordered by pure criminals -- that must be prosecuted if the rule of law is to have any meaning.  But the decision of whether to prosecute is not Obama's to make; ultimately, it is Holder's and/or a Special Prosectuor's.  More importantly, Obama can only do so much by himself.  The Obama administration should, on its own, initiate criminal proceedings, but the citizenry also has responsibilities here.  These acts were carried out by our Government, and if we are really as repulsed by them as we claim, then the burden is on us to demand that something be done.

More than 250,000 Americans attended protests yesterday (ostensibly) over taxes and budget issues.  If these torture revelations are met with nothing but apathy, then it will certainly be reasonable to blame Holder and Obama if they fail to act, but the responsibility will also lie with a citizenry that responded with indifference.

Finally, it should be emphasized -- yet again -- that it was not our Congress, nor our media, nor our courts that compelled disclosure of these memos.  Instead, it was the ACLU's tenacious efforts over several years which single-handedly pried these memos from the clutched hands of the government.  Along with a couple of other civil liberties organizations, the ACLU (with which I consult) has expended extraordinary efforts to ensure at least minimal amounts of openness and transparency in this country, something that was necessary given the profound failures of these other institutions to do so.