The crumbling beauty of "Grey Gardens" 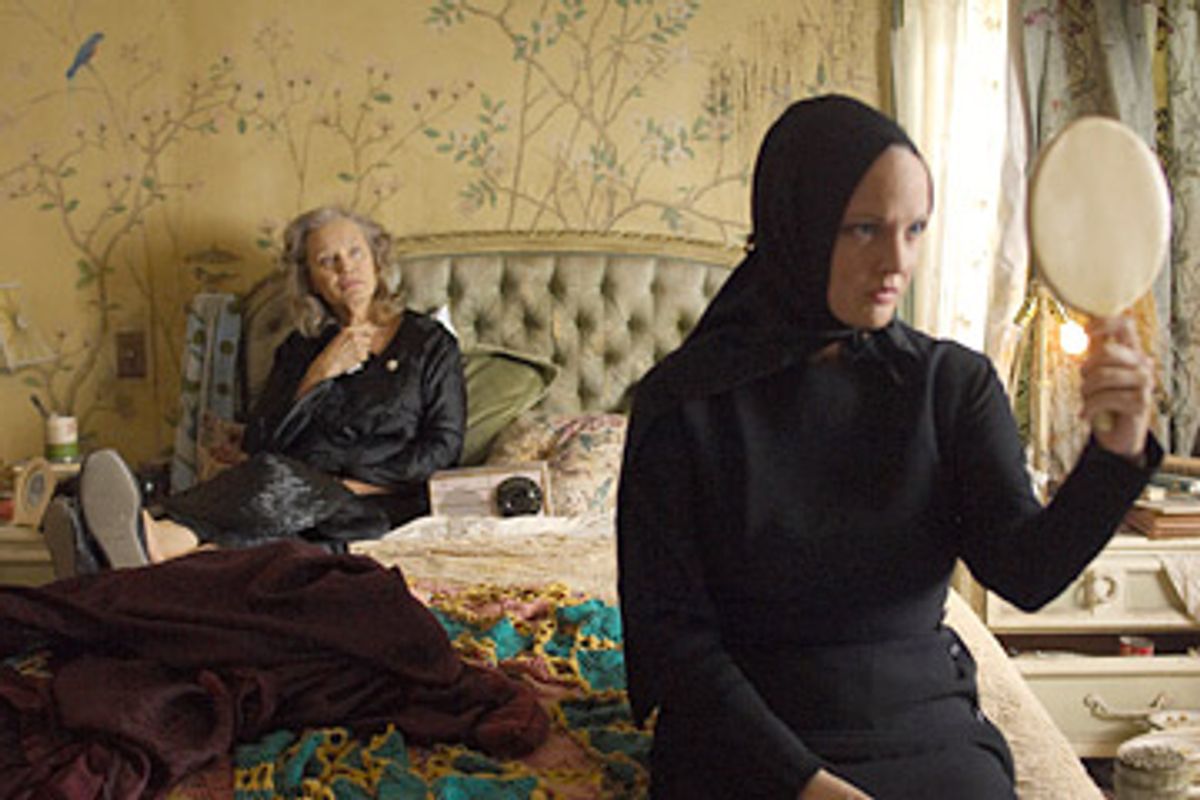 How is it possible that two reclusive, batty aristocrats whose lives looked liked the end of a line -- albeit the fantastic flaming out of a certain kind of American old wealth -- have become a veritable industry? Edith Bouvier Beale and her daughter, "Little Edie," relatives of Jacquelyn Kennedy Onassis who chose to live in eccentric squalor, steadfastly turned their backs on industry of any kind. Yet, starting with the 1975 Albert and David Maysles documentary "Grey Gardens," they became cult heroines, the focal points of an obsession that now needs to be fed on a regular basis.

Twenty years after "Grey Gardens," Albert Maysles released "The Beales of Grey Gardens" with leftover shavings from the original; then there was the celebrated Broadway musical, (accompanied by a documentary about the making of the musical). There are high-fashion photo shoots inspired by Little Edie's flamboyantly disheveled style, memoirs by people who knew the Beales, CDs -- even a jewelry company (the Grey Garden Collection) founded by a relative. And now, on Saturday, HBO premieres the two-hour feature version of "Grey Gardens" with Drew Barrymore as Little Edie and Jessica Lange as Big Edie, her mother and captor. What could possibly be next? A Nickelodeon cartoon called "Little Edie and Big Mama"? Or perhaps a Bravo reality show: "America's Next Top Eccentric"?

I emerged from the screening of "Grey Gardens" blinking with confusion at the ass-backwardness of it all. A documentary often fleshes out the back story of a real-life event. Yet here I was watching a feature film in order to get the "truth" behind a cinéma vérité classic. The Maysles' portrait of this extraordinary duo was subtle and invasive in equal measures, bearing very little resemblance to the current genre of reality TV (starring Bonaduces and Baios) that thrives on the rotten luck and poor choices of the formerly famous. Watching the original "Grey Gardens," you couldn't help wondering how these women had tumbled into this state of decrepitude and how the filmmakers had inveigled their way into the Beales' good graces.

The movie answers both of those questions, flipping between the Beales' glamorous glory days in the 1930s (glimpsed only via old photos and anecdotes in the original doc) and their shambolic existence at the time the Maysles met them in 1971. It's a strange project, working backward from the snippets of a life as gathered from a documentary, developing a narrative from the flotsam and jetsam of two not-quite-there creatures' competing memories.

Barrymore has diligently studied Edie's every move and utterance, trying a little too earnestly to re-create everything from her dancing to her diction (the latter a strange soup of dragged-out syllables that sounds both old-world posh and New Yorkish). She plays the young Edie -- the one we don't know very well -- as an ebullient bombshell, a cup perpetually running over. Serenely walking on the Easthampton sand in a white swimsuit with her awestruck little niece Jackie Bouvier, she is a golden-haired It Girl on the verge of coming out to society, courted by the likes of J. Paul Getty and Joe Kennedy Jr. But as the film makes clear via its chronological leaps, the seeds of the 50-something Edie (with her upside-down skirts, impracticality and withering wit) can be traced straight back to her youth. Evidence of her skittish streak: Edie runs out on her own debutante ball. Her mother doesn't seem all that surprised by Edie's misbehavior, chiding her, "Always the queen of the dramatic pause."

Is Little Edie's behavior heroically rebellious, stupendously self-destructive or some tragic mix of the two? She's chasing after pleasure in an era when women of all classes are expected to settle down and hush up. Spurning the attention of suitable bachelors, Edie chooses to sleep with married men, knowing that a husband would snuff out her dream of becoming a performer (just as Edie's father had curtailed Big Edie's career as a singer). In a scene taken directly from an anecdote in the documentary, Edie assails the Broadway producer Max Gordon in a restaurant and does a charmingly amateurish little song and dance number for him. It's hard to know whether Gordon really means it when he compares her to Judy Holliday, but that moment is forever lodged in Edie's gut as her big chance -- a chance she didn't take. Pressured by both her disciplinarian father (who expects her to work as a secretary until she lands a husband) and her needy mother (who wants Little Edie back home to keep her company), she buckles. And never quite unbuckles.

The glorious thing about the documentary was its ambiguity: There are no clear villains. Sure, Big Edie screeched and bossed her daughter around, but it appeared to be a symbiotic relationship, soaked in mutual affection -- the familiar dynamic of so many mother-daughter relationships. But in this incarnation, Little Edie dubs her father, Phelan Beale, "the villain of the piece." Determined to be rational (especially in the middle of the Great Depression), he crushes the very irrational women in his life, stripping them of their creature comforts. "Neither of you would know stable if it walked through your soup," he rants at one point. Later on it will be Phelan and Edie's two pragmatic sons who confront Big and Little Edie, begging them to be realistic about money and the irrationality of hanging on to the house. It is as if something in them demanded all or nothing -- and sensing that all was not on the cards, they created their own cocoon, seemingly insensible to the decrepitude around them.

That decrepitude has been widely fetishized, and so it's not surprising to see such lavish attention paid here to costumes and set designs. Everything is lushly dilapidated and distressed in a most aesthetically pleasing way. First-time director Michael Sucsy has a good eye for shambles: I particularly remember the tableau of mother and daughter in strange black mourning outfits listening to JFK's funeral on the radio, sitting primly on a bed swamped by garbage and cats. The camera devours the decay -- a tree is growing through the ceiling! A cat is peeing behind the painting of Big Edie propped on the floor! But the women who once lived in luxury treat it all with a certain vagueness, as though the outside world barely registers in comparison to the intensity of their inner lives.

Jessica Lange's Big Edie is an enigmatic, lonely figure, exuding a low-level warmth that keeps her daughter orbiting around her like a satellite. She sometimes fades into the background, allowing Barrymore to preen in the spotlight before chastening her with a passive-aggressive slap. "I don't think you see yourself the way others see you," Big Edie warns her daughter toward the end of the film, as the Maysles are wrapping up their documentary. "You are an acquired taste."

Cleverly, the making of the documentary becomes an intrinsic part of the movie, used as both a framing device and a happy (or at least happyish) ending. Far from tricking the Beales into revealing themselves, the Maysles stumble upon two women ferociously eager for an audience. They happily agree to be filmed, although they seem somewhat muddled abut the nature of the project. "Is there a script?" Little Edie asks. "I'm a very quick study."

"Grey Gardens" does a vivid, entertaining job of bringing cinéma vérité to fictional life. But as Hilton Als wrote in 2001 of the Maysles' documentary, "What draws the viewer in are the stories around what we cannot see: Miss Beale lamenting the loss of a scarf. The suitors turned away. Mrs. Beale’s infatuation with a man whose minor musical talent is better remembered than heard. Money spent." This movie fills in those bittersweet blanks, forcing "Grey Gardens" lovers into a trade-off: Our curiosity is sated, but we lose some of the most haunting shades of gray.