A smart thriller about the death of newspapers? Russell Crowe plays a reporter clinging to his job, and his principles, in this refreshingly grown-up film. 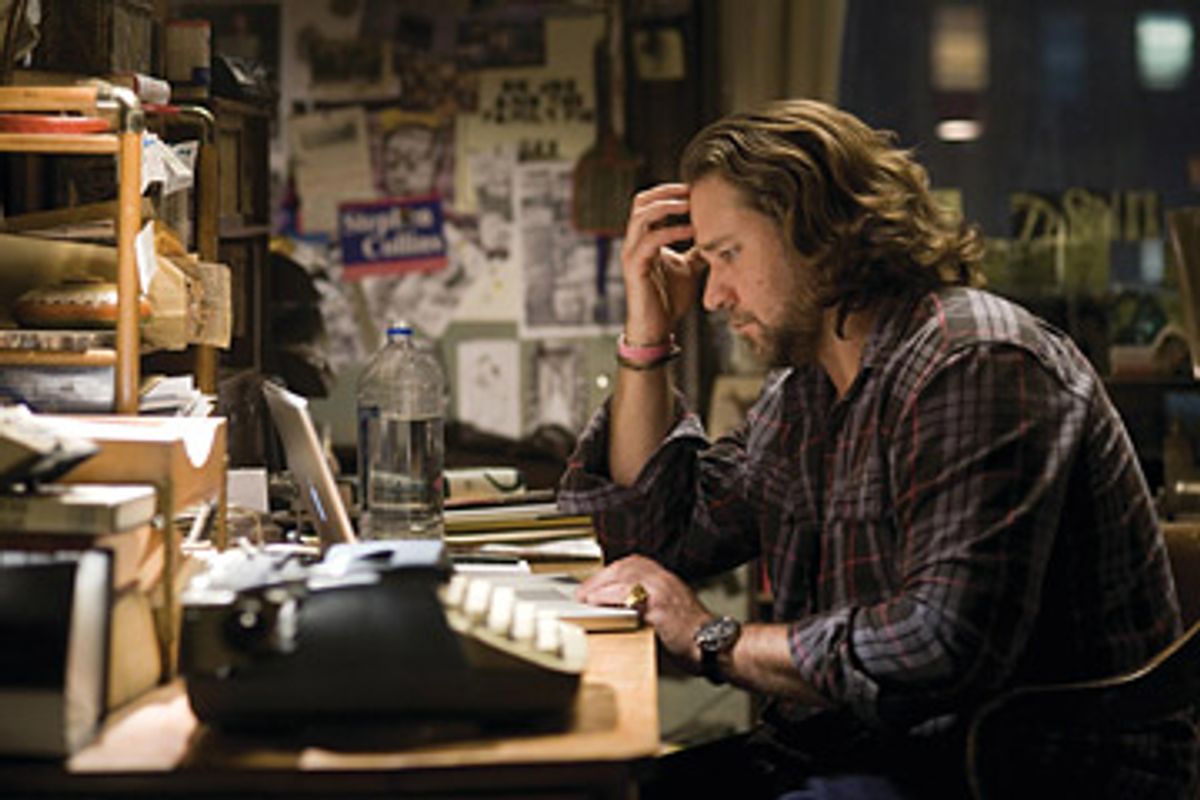 Now that Hollywood has discovered that the key to putting fannies in seats is to make movies based on comic books -- and lots of 'em -- releasing an intelligent adult thriller about the death of newspapers sure seems like a stupid move. Instead of a guy in a latex leotard clinging to the side of a building, we have a chubby, middle-aged newspaper journalist (in this case, Russell Crowe) clinging to his job, not for the money or even for the glory but for the sake of the principles involved. All he wants to do is to get the truth out there, accurately; he's even happy to share a byline with a cub reporter (in this case, Rachel McAdams), as long as the story gets told the right way. Who on earth is going to pay to see that? Especially with no 3-D glasses involved.

Even just three or four years ago, the existence of a reasonably smart adult film like "State of Play" -- which is based on a BBC television series and which was directed by Kevin Macdonald ("Touching the Void," "The Last King of Scotland") -- wouldn't seem so unusual. Today it stands out starkly in a landscape of aggressively ironic comedies, ambitious but lackluster animated pictures and the aforementioned comic-book movies, particularly when beautifully made, unapologetically grown-up thrillers like Tom Tykwer's "The International" fail to find an audience. And as disappointed as I was with Tony Gilroy's too-tricky romantic caper "Duplicity," it did make me nostalgic for pictures aimed at an adult audience that at least make some attempt at style and wit. Maybe "State of Play" (on which Gilroy worked as a writer) is, as those movies turned out to be, just tilting at windmills, another desperately hopeful picture made for a moviegoing audience that no longer exists.

Even if that's the case -- especially if that's the case -- we need more mainstream movies like it. In "State of Play," Russell Crowe's Cal McAffrey is an investigative reporter for the Washington Globe (clearly a stand-in for the Washington Post) who's drawn into a case that affects one of his closest friends, upstanding congressman Stephen Collins (Ben Affleck), who's leading the charge against a multibillion-dollar contractor accused of committing atrocities against Iraqi civilians. When a woman who, it becomes clear, is Collins' mistress dies in a subway accident, Cal begins to follow certain threads that don't lead where they should. One of Cal's young colleagues, Della Frye (McAdams), is also chasing down bits of the story, but she's not, in his eyes (or in the movie's), a "real" reporter: Della works for the paper's "online side," as it's rather cavalierly called, and although she's smart and scrappy, she has no qualms about slapping a semi-informed blog post on the paper's site. Cal, seasoned, beaten-down and, like most of his ilk, knowing that his days as a professional journalist are probably numbered, has little respect for her. But his boss (played by Helen Mirren) lays the situation out clearly: "She's hungry, she's cheap, and she churns out copy every hour."

Once Cal starts working more closely with Della, he sees she's smarter and more dedicated than he's given her credit for: It turns out he expects more of her than the paper does, and she rises to the challenge. Because the central idea embedded in "State of Play" isn't "online bad, print good": It's that the craft of journalism has to find a way to survive into the next generation, which wouldn't be such a dire problem if the architecture that supports journalism as we know it weren't crumbling around us by the minute. While "State of Play" is, in some ways, an elegy for the printed newspaper, it's really more of a rallying cry for newspapers to rethink and retool everything, fast. The new house has to be built and ready before the old one crashes to the ground.

It's something of a marvel that Macdonald manages to get those ideas across cinematically in "State of Play" without making them seem forced and heavy-handed. "State of Play" does get a little creaky in its last third -- at that point it needs to be more streamlined, more concise. (Although when Jason Bateman shows up as a player in this sordid little Capitol Hill drama, he injects a fat dose of humor and life into the proceedings, which keeps them from flagging too much.) But Macdonald, the screenwriters (the script was written by Matthew Michael Carnahan, Gilroy and Billy Ray, adapted from Paul Abbott's script for the television series) and cinematographer Rodrigo Prieto manage to weave their ideas through a sturdy-enough plot, so we never feel we're being preached to. Macdonald knows how to give filmmaking precision the illusion of being casual. In an early sequence Crowe shows up at a crime scene, and as he's quizzing one of the cops (he's brought an extra cup of coffee to smooth his way into the guy's good graces), Macdonald lowers the sound of the dialogue and brings up the ancillary noise, that of traffic and helicopters: The suggestion is that no matter how important you may think your job is (or how important it actually is), life goes on around you -- it's not about to stop.

Crowe is an extremely gifted actor who not only has hit the age at which leading-man glamour is harder to hang onto; he's also working at a time when leading-man glamour isn't as big a draw as it used to be. In "State of Play," he's a little thicker around the middle, and a bit more lumbering, than usual. His Cal is shaggy and sleep-deprived -- he has the look of a guy who keeps forgetting to shower. Crowe's lack of vanity is perhaps its own kind of vanity; you might call it bad grooming used as an actor's tool. But the effect works. Cal wears his seriousness and fortitude like a shield, even though he knows his profession is facing defeat. He shows some ragged tenderness, too, particularly in his scenes with Stephen's wife -- he's been friends with the couple for years -- played by Robin Wright Penn.

But Cal's contentious interplay with Della is the movie's backbone, and McAdams meets the challenge admirably. She makes Della both likable and frustrating. She's got all the raw materials a good journalist needs; the problem is that no one has taken the time to clue her in to the delicate ins and outs of the profession. Or to the fact that, sometimes, getting the story right just takes time and legwork. McAdams is capable of showing both chipper cluelessness and burgeoning insightfulness. When she and Cal start working together seriously on their story, he assigns her to what she perceives as a lesser task and grumbles, thinking he's patronizing her. Actually, he is -- but the greater idea, which she's sharp enough to pick up on, is that the seemingly tiny parts of a story often expand to be crucial ones.

When Cal and Della finally have their story ready -- and they don't run with it until they're certain it is ready, which is yet another suggestion that "State of Play" takes place in a movie dream world instead of the real, contemporary one -- he suggests that they put it up right away, that night, online. Della responds with a line that struck me as almost laughably corny when I heard it, although the reality is that it stuck me like a pin: "When people read this story, they should have newsprint on their hands."

Yes, they should, although they probably won't: Even though Cal and Della run their story in the print edition, the truth is that most of the people who read it, even in this movie dream world, will probably do so online. The movie's closing credits show a newspaper being lovingly produced, and the sequence is visual poetry: We see the plates being made, and the paper running off the presses sheet by sheet. That's already a quaint image of days gone by, and the movie knows it. "State of Play" is a work motivated by fear, not nostalgia. It's less concerned with the idea of saving newspapers as we know them than it is with the notion that serious investigative journalism has to survive, in pixels if not in print. The trick is to save it before the presses stop running for good.