A whistle-blower who needs Obama and Holder's protection

Thomas Tamm exposed the Bush administration's illegal domestic surveillance. Why is the government still holding a criminal indictment over his head? 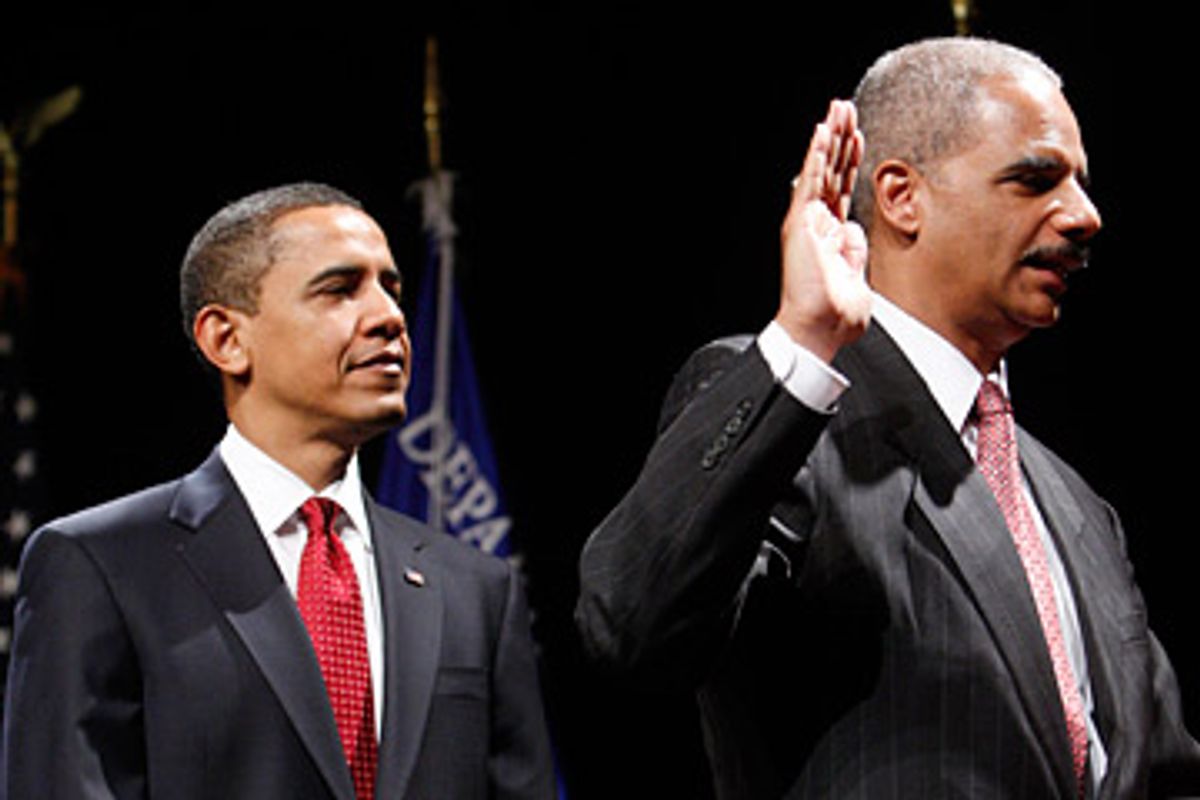 Even under the very best of circumstances, years of investigation, litigation and legislation will be necessary to rectify the constitutional wrongs done by the presidency of George W. Bush. To date the Obama administration has failed to fully repudiate Bush's monarchical version of executive power and instead shows signs of accepting the authoritarian orientation of its predecessor. Yet on the question of illegal surveillance, at least, President Barack Obama has spoken out bluntly, denouncing the sweeping and warrantless domestic spying carried out by the National Security Agency under orders of the Bush White House. So did Attorney General Eric Holder during his confirmation hearings last winter.

According to the latest report in the New York Times, Holder is overseeing a wide-ranging probe of the NSA to determine the extent of its lawless domestic spying and whether those activities have continued since Bush left office. Administration officials emphasized their concern over possible civil liberties violations and their determination to end the unlawful conduct of "the program," as knowing intelligence and law enforcement officials used to refer to the Bush surveillance project.

If Obama and Holder honestly want to undo the damage done by the program, here is a simple question: Why is the government still holding a criminal indictment over the head of the former Justice Department official who dared to expose its existence?

That beleaguered lawyer is Thomas M. Tamm, the whistleblower who placed an anonymous call to Times reporter Eric Lichtblau five years ago because he had discovered evidence that the NSA was gathering domestic surveillance, using highly dubious and concealed methods that his colleagues at the Department of Justice knew to be illegal. Having tried to bring these concerns to the attention of his superiors and the appropriate committees in Congress, Tamm finally felt that he had no choice except to drop a dime. Later Tamm met with Lichtblau and his Times colleague James Risen, serving as an important source for the controversial front-page story that exposed the program in December 2005, won a Pulitzer Prize for their newspaper, and resulted in congressional reform of the Foreign Intelligence Surveillance Act.

When Bush could not dissuade the Times from running the NSA story, he denounced the leaks and ordered the criminal investigation by the FBI that eventually led to Tamm — an unlikely perpetrator of a national security offense. As Newsweek reported in a profile that broke the story of Tamm's ordeal last December, he was reared within the national security culture of the old FBI. Both his father and his uncle were high-ranking officials in the bureau during the reign of director J. Edgar Hoover, and Tamm says that he played in Hoover's office as a child. He was a leader of the young Republicans at Brown University before going on to law school and a stellar career as a federal prosecutor that won him the John Marshall Award, one of the Justice Department's most prestigious honors.

All that is now overshadowed by the aftermath of his decision to expose what he knew was wrong. In the early morning hours of Aug. 1, 2007, a squad of heavily armed FBI agents wearing black flak jackets entered his suburban Maryland home, rousted his family from their beds, and seized his laptop computer and other possessions as well as computers belonging to his children. Justice Department prosecutors urged him to plead guilty to a single felony count of revealing classified information and to cooperate with the investigation of the other Times sources in the federal bureaucracy. Tamm declined the plea offer, saying he had done nothing wrong, didn't intend to cooperate, and in any case knew nothing about what anyone else might have done.

Yesterday afternoon, more than 20 months after the FBI raid, Tamm appeared at the National Press Club to speak at a luncheon where he received the Ridenhour Prize for Truth-Telling from the Fertel Foundation and the Nation Institute (where I help to direct an investigative reporting program). Now 56, he still has the unassuming appearance of a veteran FBI agent.

Introducing him was former ambassador Joseph Wilson, fellow Bush White House target and inaugural recipient of the same prize five years ago. The FBI agents had "gone to the wrong address" when they burst into the Tamm home, said Wilson, who added that they ought to have raided one of Dick Cheney's undisclosed locations instead. He described Tamm as a heroic figure who "understood his responsibility to uphold the Constitution and the law against all enemies, foreign and domestic, and understood the possible consequences of his action."

The consequences of Tamm's act have included the abrupt end of his career at Justice, many thousands of dollars in legal expenses, bouts of depression, and a difficult struggle to find work in his profession. Perhaps most difficult of all has been the uncertainty of waiting for the government to bring an indictment against him.

In accepting the award, he explained that he had merely tried to do what he had always done. "We are safer and more secure when we support the rule of law," he said. "We need to hold our domestic enemies accountable. We still don't know the truth about what was done in our name -- how many wiretapped, how many tortured. We can handle the truth. Bring it on."

Bringing on the truth will require time and fortitude, but one act of justice can be done now. If the telecommunication companies that helped the NSA to violate the law could be immunized with Obama's vote last year, if the Obama administration is reluctant to prosecute former Bush officials for their alleged crimes, and if the president and the attorney general recognize that illegal wiretapping is an intolerable offense against the Constitution, then it is long past time to lift the burden of investigation from Thomas Tamm. Let the government acknowledge what by now is obvious. No fair-minded jury would convict him, and none ever should.