Jason Statham returns as an ass-kicking hit man, but can this adrenalized action film replicate the cheap, sordid thrills of the 2006 original? 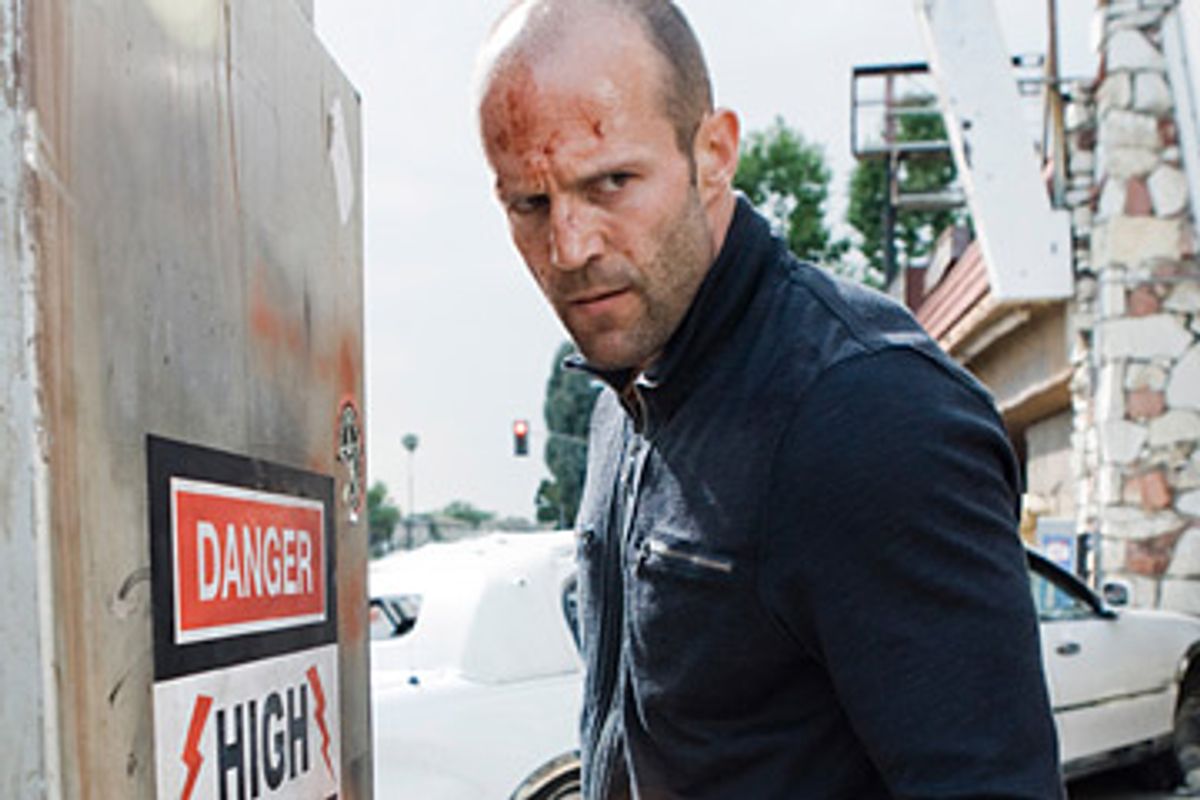 "Crank: High Voltage" clocks in at a trim 96 minutes; unfortunately, that's 95 minutes too long. As a fan of the 2006 "Crank" and the cheap, sordid thrills it had to offer, I'd been greatly looking forward to the sequel, which I've lovingly been calling "Crank Part Deux" for weeks now. "Crank" was enjoyable because it knew it was junk: The first time around, directors Mark Neveldine and Brian Taylor gave us a picture that was surprisingly good-natured; its aggressive disreputability was accompanied by a foxy wink. And Jason Statham, as Chev Chelios, a hit man who gets hit himself (with a shot of special Chinese poison that will cause him to die if his heart rate drops below ass-kicking levels), gave a performance completely in keeping with the film's antisocial but jocular spirit: He's such a likable lug, and he seemed to be having such a good time, that it was easy to get revved up just watching him.

But even though many of the same actors return for "Crank: High Voltage" (including Statham, Amy Smart and Dwight Yoakam), and even though it's shot in the same camera-on-the-fly style, this "Crank" follow-up has so little in common with the first picture that it barely qualifies as a sequel. Chelios supposedly died at the end of the first picture -- but not really. At the beginning of "Crank: High Voltage," we see a bunch of guys scoop up his possibly lifeless body and hustle it into a van. Later, we see Chelios on an operating table. An evil Chinese doctor (is there any other kind?) is removing his heart and replacing it with an artificial one. He's awake the whole time. These sinister surgeons want to take more of Chelios' body parts, but he escapes before they get the chance. The only problem is, he has to make sure his fake heart stays juiced. At one point he gets the requisite jolt by attaching jumper cables to his tongue and to one of his nipples.

That's one of the picture's more pleasant moments: Elsewhere a Latino bad guy is forced to slice off his own nipples (we get to watch this procedure in semi-discreet close-up); a wayward thug gets the tip of his elbow chopped off with a machete; and, in a strip-club shootout scene, a woman screams as bloody silicone flows from her breasts, which apparently have been nicked by stray bullets. (Nearly all of the women in the movie, including Smart, are shot in hard light that highlights every skin flaw -- they're made to look as cheap and ugly as possible.) There's also lots of groin bashing and an instance of a gun being shoved up a bad guy's rear -- but not before it's dipped in tar.

And have I mentioned the picture's numerous homophobic jokes? (That's particularly unsettling, considering that "Crank" at least featured a gay character, played by Efren Ramirez, of whom Chelios was openly protective. Ramirez returns here, but as that earlier character's brother, and the movie treats him as if he's as worthless as the women.)

I saw "Crank: High Voltage" in the theater on a Friday afternoon (it wasn't screened for critics), and the guy in front of me would occasionally shift in his seat and say in a monotone, "Man, that's crazy" -- not as if he really believed any of it was crazy, but as if he felt that, in order to feel he was getting his money's worth, he had to pretend to buy into whatever "Crank: High Voltage" was selling. The first time around, Neveldine and Taylor treated the movie's cartoony violence as a sick joke; this time around, it's an applied science, and the strain of their efforts shows.

This is also the first time I can remember actively disliking Jason Statham, who's been terrifically appealing in action movies (like the "Transporter" series) but who has also shown he can pull off more serious dramatic roles (in pictures like Roger Donaldson's "Bank Job"). I don't think it's Statham's fault he's so bad: The movie's camerawork is so choppy you can barely get a look at him, and he doesn't have any lines, only catchphrases. (Lame ones at that: After doing away with a bunch of Chinatown baddies, he snarls "Chicken -- and -- broccoli." Come again?) What made Statham so cool in "Crank" was that even as he was downing power drinks and stabbing himself with epinephrine syringes, he rarely broke a sweat: It was everyone else around him who was trying too hard. In "Crank: High Voltage," Statham just looks miserable, as if appearing in this lousy picture just sucked all the heart right out of him. Neveldine and Taylor may not be evil Chinese doctors, but they're practicing the same kind of hackwork.