"Battlestar Galactica" spinoff "Caprica" has family drama, holographs and a man named Adama. But is there enough action in this pilot to satisfy the show's fans? 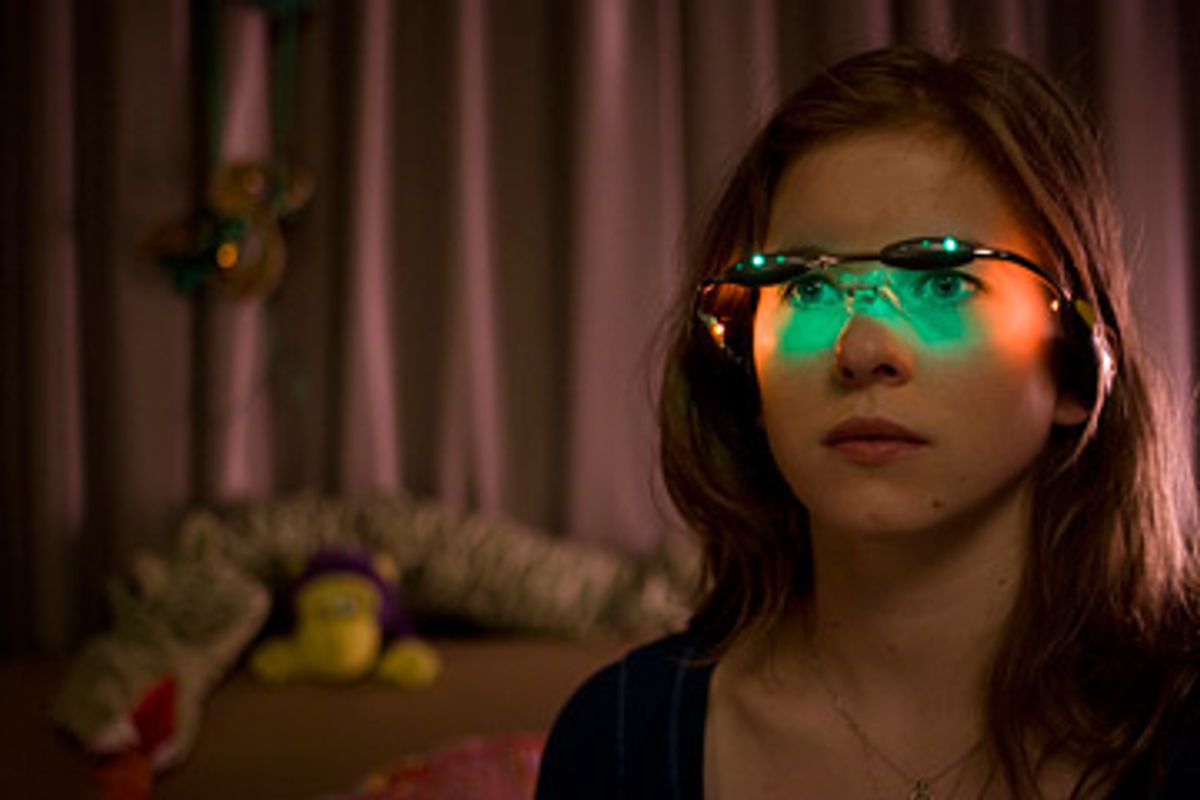 It's been a month since "Battlestar Galactica" -- the smartest science fiction series in television history -- battlestarred into the sunset. Over the course of its four seasons, the SciFi (now SyFy) Channel show about a fleet of space-traveling humans and their robotic pursuers won critical accolades, garnered a rabid cult following, and, most important, made it socially acceptable to talk about evil robots at dinner parties. If you're one of the many fans left bereft by the end of the show (as movingly dramatized in the recent Onion article "Obama Depressed, Distant Since 'Battlestar Galactica' Series Finale"), I've got good and bad news. The good news: The spinoff/prequel, "Caprica," has arrived. The bad news: It's only the pilot and, well, it's probably not what you expected.

In an unconventional launch strategy, SyFy has just released the one-and-a-half-hour pilot episode of the show on DVD and digital download (the actual series won't premiere on television until 2010). Described by blogs as "'Dallas' in space," "Caprica" is, indeed, a very different beast from its mother series. Planet-bound, slow-paced and with hardly any action scenes, the series is primarily a melodrama about two families on the planet Caprica (one of the 12 home planets of the human race in the "Battlestar" universe) as they overcome a personal tragedy. It also, of more interest to science fiction fans, tells the story of the birth of the Cylons, the race of robots who, as we learned in "Battlestar," eventually become hell-bent on destroying all human life.

Not so fast. In the pilot’s first big disappointment, the club turns out to be a virtual one. The teenage girl is Zoe Graystone (Alessandra Toreson), the daughter of a biotechnology magnate named Daniel Graystone (Eric Stoltz), and she's accessing the holographic club through a sunglasses-like apparatus in her school's bathroom.

The real Caprica, as it turns out, is nowhere near as interesting as the opening suggests, though Zoe, at least, is a bit of a delinquent. Not only does she hang out at the virtual orgy-and-knifing club during school hours, she's fallen in with a monotheistic cult. And thanks to her school-time holographic excursion, she gets herself grounded by her mother, Amanda Graystone (Paula Malcomson, "Deadwood's" Trixie). So, as rebellious Caprican teenagers tend to do, Zoe decides to run away to another planet with her two monotheistic friends. The plan ends in tragedy when the train whisking her toward Gemenon is destroyed by a suicide bombing.

In the weeks following Zoe's death, Graystone discovers that his daughter had been busy creating a remarkably detailed holographic copy of herself -- a breakthrough in artificial intelligence and a project that, he hopes, may allow him to resurrect his daughter in robotic form. He is aided in his resurrection plans by another grief-stricken father, Joseph Adama (Esai Morales), a lawyer who is himself eager to digitally revive the daughter and wife that he lost in the same train explosion. As "Battlestar" fans know, Adama is the father of Bill Adama, eventual commander of the Battlestar Galactica.

As premises go, "Caprica's" dead teenager uploaded into battle robot is a promising one ("Terminator" meets "Freaky Friday"?), but the pilot lacks the dramatic heft of its predecessor. It doesn't have the same sense of scale or tragedy as "Battlestar" and feels considerably more generic, both dramatically and stylistically. The drama builds slowly, and scenes unfold without much, if any, tension. What little tension it has owes to viewers' knowledge of what will happen 58 years later. There are no hostage crises or food shortages to resolve, since the show's main concern is the emotional state of its two families. In fact, robot subplot and holographic excursions aside, there really isn't much that’s science fiction-y about "Caprica."

Unfortunately, "Caprica" doesn't make for tremendously engaging melodrama either, largely because it doesn't have any characters as immediately riveting as Katee Sackhoff's Starbuck or Mary McDonnell's President Roslin. Eric Stoltz brings quiet soulfulness to his grieving father, but Esai Morales feels wooden and stilted as Adama, and the rest of the ensemble (especially, it has to be said, the child actors) aren't a particularly inspiring bunch. As for the show's visuals -- unlike "Battlestar," "Caprica" is filmed largely with fixed shots (no hand-held cameras), which robs it of much of its flair and immediacy. Its clean urban setting feels antiseptic and cold and a bit dull. Judging by the pilot, the planet Caprica is Vancouver with a fancier train system.

In the spirit of "Battlestar," "Caprica" also references a number of real-world topical issues: Adama is a member of a disliked immigrant group called the Tauron, and during their investigation of the bombing, the authorities become suspicious of a certain religious minority. But while "Battlestar's" space-bound setting was strange and destabilizing enough to make its political allusions seem fresh -- one of the joys of the series was seeing it fragment and rearrange issues like abortion and terrorism to make provocative arguments -- in "Caprica," they merely feel awkward. It's obvious that Tauron is a stand-in for Mexico (there's even a subplot about Tauronese gangs) and monotheism a replacement for Islam -- but there's nothing new to be learned here by renaming things.

When the show premieres on television next year it could take off in some interesting and unexpected directions. The show’s writing is fairly strong (one of the debut episode's co-writers, Jane Espenson, was responsible for many of "Battlestar's" best shows), and SyFy clearly has a lot of faith in creator Ronald Moore. But given the high expectations that "Battlestar" fans have for the series, and the tepidness of this initial offering, I wonder how many will come back to find out what happens in 2010.