Edible undies in the Muslim world

The racy lingerie industry is booming in Syria, where markets sell sex and seduction alongside carpets and crafts. 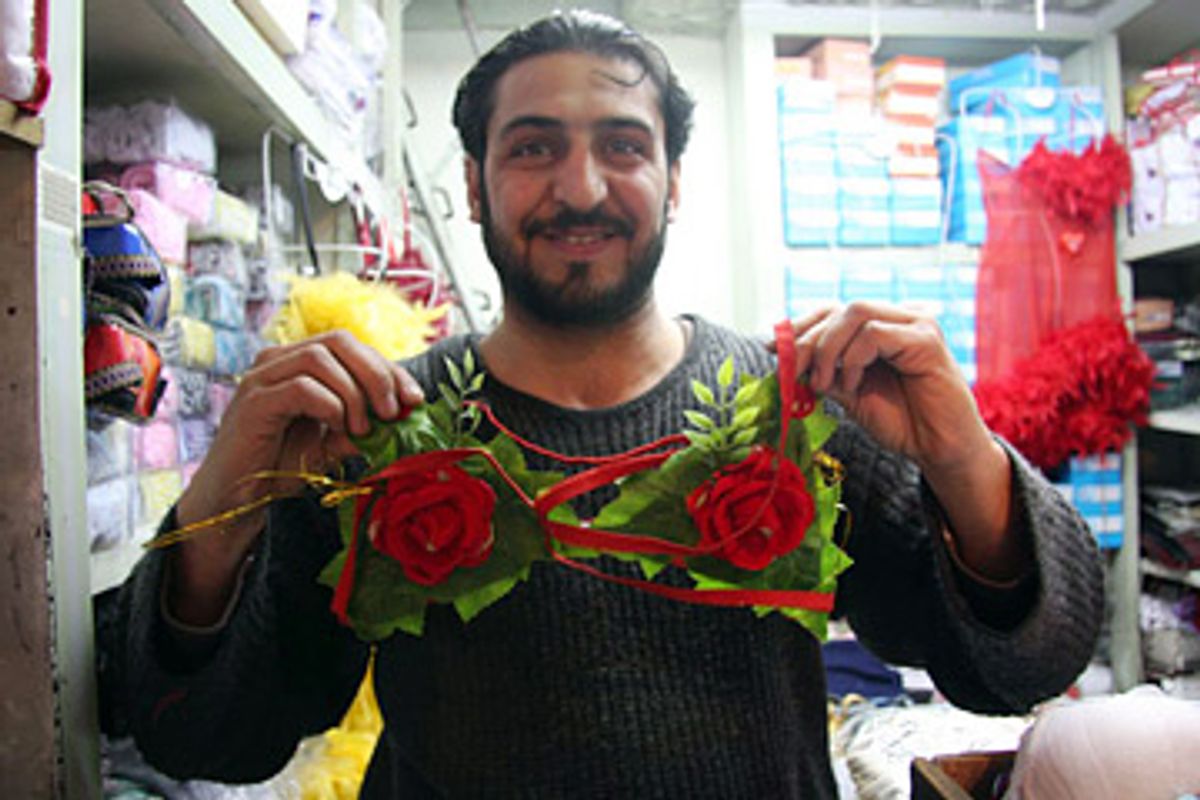 It's the "latest thing," Abdullah Hayek says, holding the garment up. It's an almost nonexistent bra and thong, which consists of strings and a tiny triangle. It's made, not of fabric, but of sugar fondant, which has been rolled out until it is wafer-thin, held together with elastic cords.

"This allows the husband to nibble the underwear off of his wife's body," explains Hayek. The garment, which costs the equivalent of about $3.90, is available in a selection of flavors, including pineapple, apple, honey, chocolate and mango. "I probably sell 15 of them a day," said Hayek.

The Hamidiyeh souk in Damascus is without doubt one of the best markets in the Arab world. Naturally you can find carpets, crafts and kitsch being hawked to tourists within the maze of alleyways. But the majority of customers are Syrian. They push through the souk by the thousands, buying washing powder in one alley and dishes in another -- and, at the intersection where the lingerie merchants sit, they buy sexy underwear.

"It all started about four or five years ago," says Hayek. His grandfather was a merchant too, selling underwear -- still chaste in those days -- to women. But then Syria got wired. "Ever since people started going to Internet cafes, and seeing what the rest of the world is wearing, demand has completely changed," says Hayek. Damascene women at first asked bashfully for "special designs." Now the fruits of the Internet-fueled imaginations of Syrian designers are displayed in the open.

On Hayed's stand, respectable push-up bras sit next to exotic models. One bra consists of two bird nests, outfitted with miniature sparrows. Above that is a design where plastic roses conceal the wearer's charms. There is a whole collection of electronically enhanced panties in which a button is attached at strategically important places. When it is pushed, lights flash, or a hidden device plays Arabic love songs.

The customers tend to be mothers buying underwear for their soon-to-be-married daughters. "Most of them are religious and wear veils and long coats," says Abu Adnan, who sells lingerie a few stores further along. It's a tradition that a Syrian bride brings a whole suitcase full of underwear when she gets married, he explains, adding that the new popularity of sexy underwear has a practical application.

"The mothers believe their son-in-law will be less interested in other women if his wife surprises him with more and more new gimmicks at home," he says. In a culture where there is always the danger that the man may find a second or third wife for himself, wives want to make sure their husband stays loyal to them, Abu Adnan speculates. Families spend up to $1,000 on the clothes. "There should be at least 30 sets, if the parents of the bride don't want to be seen as stingy."

Abu Adnan also has leather outfits, sold complete with whip, and maid costumes featuring zippers at crucial points, which are in short supply. His best seller, however, is the "applause" design. Abu Adnan holds up a slip decorated with feathers. "Please clap your hands twice," he says. After two sharp claps, the slip falls out of the shopkeeper's hand. "A built-in mechanism releases magnets," he says. "This way the man can undress the woman without touching her." The item costs about $22.

Abu Adnan explains it all with a perfectly straight face. For him, sexy underwear is business. "I have the stuff here in the shop, but I don't take it home with me." He respects his wife and daughters too much for that, he says. He also misses the times when he still sold normal nightshirts. "But if you want to make money, you have to go with the fashion."

A young couple has just entered his shop. The man carries a baby in his arms who looks about 6 months old. "We have now been married for one and a half years," says his wife, who is maybe 16. After the birth of their first child, the couple wants to bring a little zing back into their love life. They have saved up the equivalent of about $15 for that purpose, the young mother admits bashfully. Her husband examines the maid costume. "We'll choose something together," he says.

Since the news has spread throughout the Middle East that seductive lingerie is manufactured in Syria, the export of said skivvies has become economically important -- provided the political climate is favorable.

"As long as Israel is quiet, we do very good business with Gaza," said Hassan Nasser from Rose Underwear, a family-owned business. His company's underwear sales act as a kind of political barometer, says the businessman. "The market in Iraq has totally collapsed, whereas Lebanon is doing well again since the end of the internal disputes."

Nasser sits in his workshop in a suburb of Damascus between sewing machines and mountains of dyed chicken feathers and reveals his insider knowledge of the business. Jordanian women, he says, are respectable and practical-minded and prefer to buy cotton, while Saudi Arabian women like to feel covered up even in bed and hence prefer semi-transparent but long negligees.

After many years in the underwear business, Nasser says he's an expert on what goes on in Arab bedrooms. "I tell you, Palestinian women are the most interesting. They want sexy stuff -- the saucier the better."