Obama feels the love at the CIA

Were they clapping for the new president at Langley because he won't punish them, or because they don't have to torture anyone anymore? 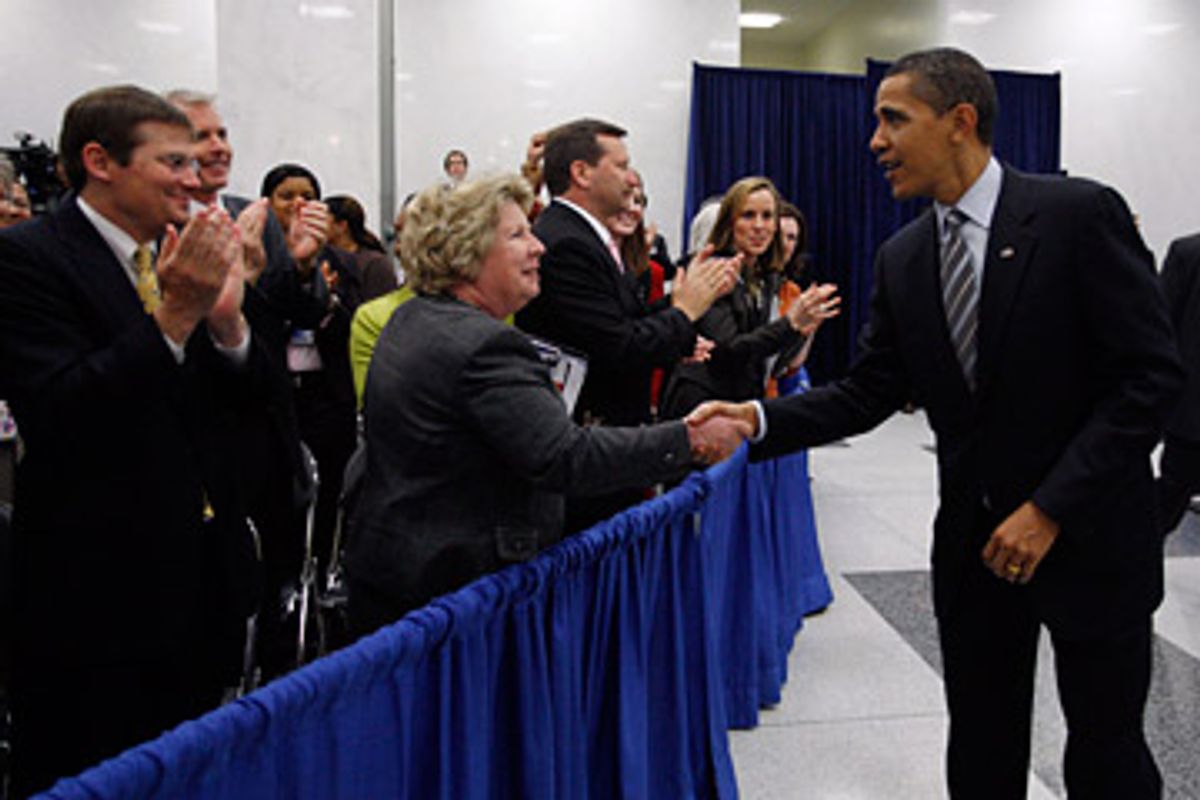 Fortunately for President Obama, no one at the CIA's headquarters decided to squeeze him into a small wooden box and cover him with insects when he arrived in Langley, Va., Monday afternoon to speak to the nation's spies. Or, for that matter, shove him against a wall. Or give him a good old "insult slap" to the face.

Of course, if anyone had tried any of that, they would probably have gotten away with no punishment more serious than a Secret Service-administered wedgie. Obama's visit to the George Bush Center for Intelligence (named for the 41st president, a former chief spook, not for his son) was only the latest stage in a campaign to get the country to forgive, if not forget, that the U.S. government both sanctioned and engaged in torture. Since releasing a series of Bush-era memos late last week revealing -- in horrific detail -- exactly what U.S. officials were doing to prisoners in the war on terror, the White House has been walking a tricky path. The Obama administration is trying to condemn the actions George W. Bush's aides authorized without committing to prosecuting anyone for them. "It's time for reflection," White House chief of staff Rahm Emanuel told ABC's "This Week With George Stephanopoulos" on Sunday. "It's not a time to use our energy and our time in looking back and any sense of anger and retribution."

On Monday, Obama didn't directly mention prosecution, or lack thereof, to the crowd at the CIA -- where people gave him a loud and long ovation when he walked into the room. But he did tell the agency's employees that he knows what they're going through. "I understand that it's hard when you are asked to protect the American people against people who have no scruples, and would willingly and gladly kill innocents," Obama said. He took a veiled shot at the Bush administration, especially former Dick Cheney aide Scooter Libby, who was convicted of perjury in connection with disclosing the identity of a former CIA undercover operator. "There is nothing more important than protecting the identity of CIA officers," Obama said. "So I need everybody to be clear. We will protect your identities and your security as you vigorously pursue your missions. I will be as vigorous in protecting you, as you are vigorous in protecting the American people."

Instead of addressing critics who want the new administration to push harder to punish the people responsible for the torture policies, the president reaffirmed the decision he announced during his first week in office to ban the practice going forward. "I'm sure that sometimes it seems as if that means we're operating with one hand tied behind our back, or that those who would argue for a higher standard are naive," Obama said. "What makes the United States special, and what makes you special, is precisely the fact that we are willing to uphold our values and our ideals even when it's hard, not just when it's easy; even when we are afraid and under threat, not just when it's expedient to do so. That's what makes us different. So yes, you've got a harder job and so do I. And that's OK."

That was clearly the message the White House wanted people to focus on -- "Obama stopped torture," rather than "Obama won't punish torturers." At a briefing a few hours before Obama arrived at the CIA building, press secretary Robert Gibbs brushed aside questions about punishment. "The president is focused on looking forward," he said, flatly.

Then again, critics on the right have been hammering the administration as hard -- if not harder -- than those on the left over the torture memos. But what has conservatives upset is the very thought of admitting what the U.S. was doing for the last few years. "What we have described for our enemies in the midst of a war are the outer limits that any American would ever go to in terms of interrogating an al-Qaida terrorist," former CIA director Michael Hayden said on "Fox News Sunday." "That's very valuable information. Now, it doesn't mean we would always go to those outer limits, but it describes the box ... which Americans will not go beyond. To me, that's very useful for our enemies."

So Obama and his aides have spent as much time since they released the memos pushing back against the idea that he's endangering the country as they have explaining why he doesn't plan to try anyone for torture. "One of the reasons the president was willing to let this information out was that already the information was out," Emanuel said Sunday. "So if they're saying that you basically have exposed something, it's been written. Go get the New York Review of Books. It's there." That conjured up images of Ayman al-Zawahiri paging frantically past essays by J.M Coetzee and personal ads from lonely Ph.D.'s seeking Scrabble and Shakespeare to find out what, exactly, the CIA would do to al-Qaida minions, but the point was hard to contest. For nearly five years, the nation has known about what the Bush administration's Office of Legal Counsel called "the waterboard." The agency's practice of shipping suspects off to countries that don't have as many legal protections against torture was revealed almost four years ago.

And even if the president's trip Monday made quite plain that he won't be spending much time trying to look back and figure out how that all happened, it did, also, underscore his commitment to preventing it from happening again. "Our nation is stronger and more secure when we deploy the full measure of both our power and the power of our values, including the rule of law," Obama said. "I know I can count on you to do exactly that." The applause the CIA staff gave him could have been because they knew they wouldn't be on the hook for what the agency did under Bush -- or it could have been because they knew they wouldn't be doing it anymore.